Skip to main content
Labels
Posted by Man For All Seasons February 18, 2010

Well it has been a couple weeks since my last blog post. This is due mostly to the commandant's inspection which occurred yesterday. For those not in the know, this is an occasion where the commandant of RMC, in this case Commodore Truelove, and a number of inspection teams perform a thorough inspection of every squadron. Why is this considered important, because it is worth a number of points in the commandant's cup, an annual competition between squadrons consisting of athletics, academics and military proficiency. Thus the last two weeks have been occupied by meetings about standards, daily squadron inspections, shining parties, ironing marathons and cleaning frenzies. Not only have I not had the opportunity for a game in two weeks but for the sake of the inspection all my wargaming supplies were removed from my room leaving me with no opportunity to paint any figures.

With the inspection finally over Phil and I determined that we would have a victory game last night. This was aided by a cancellation of class this morning and no pressing obligations before 12:00 hours. In the end, with the arrival of my brother we played two games, one of 6mm WWII and one of cowboys. I will detail each of these in order.

The game of WWII saw the use of my new port (we declared the game to be in Holland as an explanation). The table was designed with three terrain objectives, a village and port, a farm complex, and a bridge. The winner was to be determined by whomever controlled two of the three objectives at games end. The German force began in a defensive position occupying all three objectives. The Americans were detailed to push them out of these positions, however, the force balance was such that only a 3:2 advantage in numbers was enjoyed. 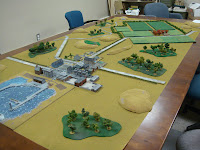 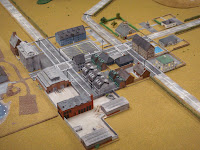 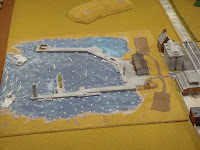 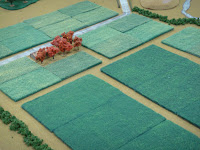 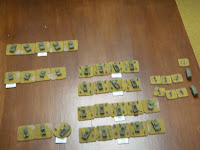 The American force consisted of 4 platoons of infantry, 1 platoon of shermans, 1 platoon of stuarts, plus an array of .50 caliber MGs, Bazookas, a sniper, 105mm howitzer shermans and other support vehicles. 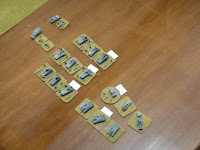 The German force consisted of 3 platoons of infantry, 1 platoon of Stugs and an array of MG42s and support elements. 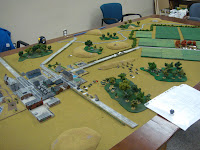 The game began with an American push on the village and a push directly between the farm and village designed to separate the defending platoons. 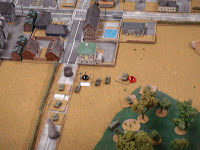 The thrust into the town encountered heavy resistance from a German infantry platoon with a supporting pak40 and an MG42 team. 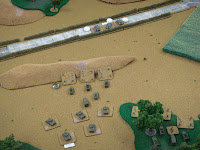 The center thrust, however, encountered little resistance as it prepared to overtake a platoon of Stugs. 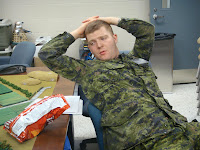 The attending audience looked on in confusion as the German defensive positions managed to appear both strong and weak at the same time. 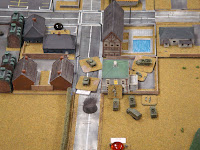 After some intense bombardment of the German held buildings using every weapon that could be found, the American thrust begins to gain a foothold. 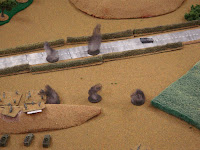 The thrust in the center saw the destruction of all 3 stugs and all the shermans but the dividing wedge was successful. The arrival of a reserve platoon of infantry failed to impede this thorn in the German defenses. 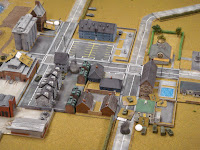 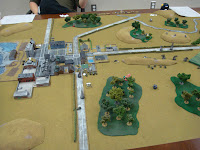 At the games end it had become clear that the Germans could offer no real resistance. One of their infantry platoons was completely wiped out and the other two were badly mauled. The Stugs had been destroyed and the Americans now occupied the town. In addition a fresh American infantry platoon was near occupying the farm. The game proved to be a quick but bloody affair that challenged both players with tense decisions. I intended the game to be a more infantry dominated scenario and it ended up being one of the more fun games we have played proving that you don't need lots of tanks to be challenging and enjoyable.

With this game over my brother decided that we should play a round of cowboys using the rules we had developed previously to modify Legends of the Old West. He had made some improvements since the last game which proved to work quite well. For this game Daniel had completed work on his new Livery. 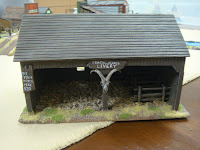 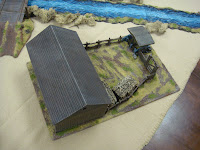 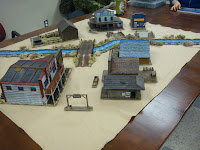 The town as always looked spectacular but this time Daniel added his new wild west ground sheet and dried bushes along the river. 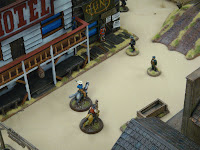 Two horsemen race towards the bridge. 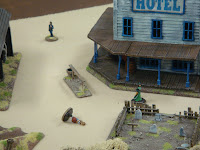 A not so lady like lady lies unconscious in the aftermath of the gunfight.
Email Post
Labels: 28mm 6mm Cowboys WWII