Skip to main content
Labels
Posted by Man For All Seasons April 29, 2017

Good day everyone, this past Friday I invited a couple of friends over for a game of Metaverse involving fleets from Babylon 5 and Battlestar Galactica. This mixing of two Newtonian universes provided for an entertaining game of relative mosquitoes versus giants. The scenario called for an Interstellar Alliance task force to take on a Battlestar and her escorts in the Kuiper belt of an unnamed star system. Simon chose to play with the BSG ships leaving the B5 ships with Kevin and I. Kevin ended up with the Earth Force assets and myself with the Minbari. 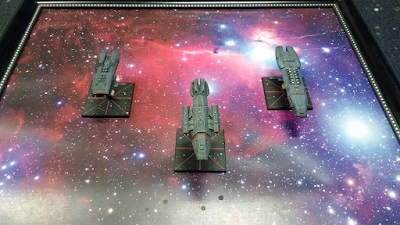 The Colonial fleet comprised the following: 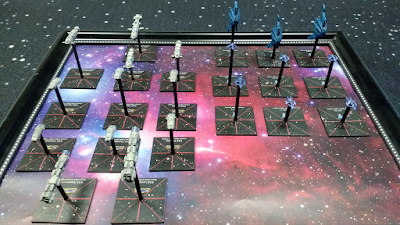 The ISA fleet comprised the following:

The two fleet commanders started the game by opposed die rolling for deployment. When a player was forced to deploy a squadron onto the table they had the choice of leaving the squadron in reserve (outside the battlespace for BSG or in hyperspace for B5). The reserve squadrons could be brought anywhere onto the table as in a Strategic FTL Jump but had to wait a minimum number of turns equal to the charge times on their FTL drives.

As it happened the BSG fleet commander rolled poorly and ended up putting his entire fleet (all 3 ships) before a single B5 ship hit the table. This provided a certain tactical flexibility to the Earth Force General (overall command). Looking at his ships he quickly surmised that the Earth Force ships were not good candidates to leave in reserve as their jump drives required a long charge time. The Minbari assets, however, could charge their drives much faster. Yet, he did not want to forgo the naked firepower of the three warcruisers. Weighing his options the General opted to put the six whitestars into reserve, a seemingly wise move. 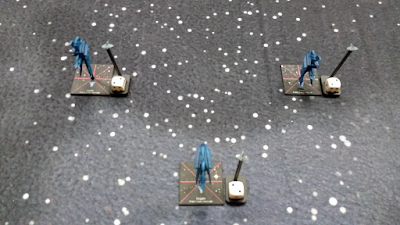 At one end of the battlespace the three Sharlin warcruisers faced off against the lonely Dionysus (Valkyrie Class Light Battlestar). 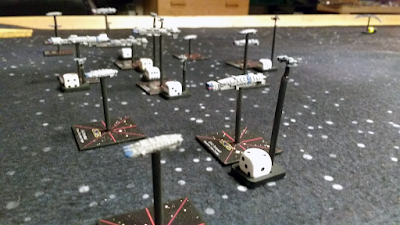 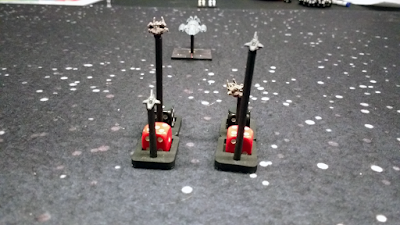 The Dionysus (Valkyrie Class Light Battlestar) was quick to launch her alert Vipers and her Raptors into a strike mission aimed at the Sharlins. The Vipers were carrying Anti-Fighter missiles while the Raptors carried Nukes making for a deadly strike package. 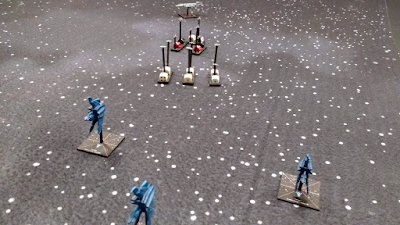 The Minbari responded by dedicating half their Nial squadrons to intercept missions hoping to keep the Vipers and Raptors away from the warcruisers. The remaining Nials were still launching from their carriers. 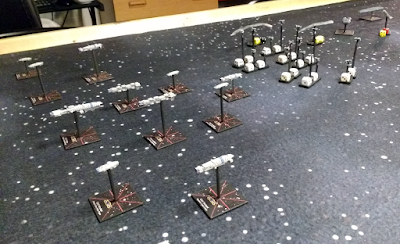 1 1/2 light seconds away the Earth Force ships and the Colonial destroyer and cruiser began exchanging fire. Neutron Cannons, Heavy Particle Cannons, and Medium Railguns slammed home into the Basilisk (Kopis Class Fast Destroyer) screaming ahead of the Sovereign (Apollo Class Heavy Gun Cruiser) but to the disappointment of the Earth Force General, achieved little real effect. The batteries of the two Colonial ships responded with a hurricane of lead that while inaccurate beyond belief still managed to land a few hits. Unfortunately for the Earth Force ships every one of these batteries that scored a hit tore entire sections off the much smaller ships. Within the first few volleys the EAS Proteus (Marathon Class Cruiser) had her forward third crumpled like wet paper, disabling her deadly Neutron Cannons. Amidst this fire fight, a swarm of Aurora and Thunderbolt Starfuries launched towards the colossal Colonial ships. 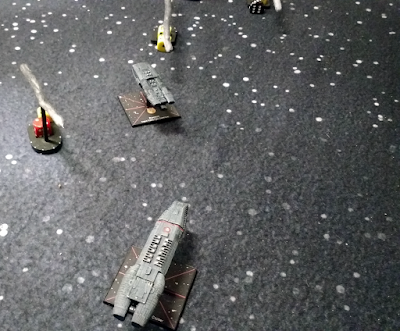 While the energy weapons and railguns crossed the void both sides loosed volleys of missiles at each other. The Colonial missiles tubes only had one round each while the EAS Foxfire had magazines for her launchers. However, the Sovereign (Apollo Class Heavy Gun Cruiser) carried no less than 40 VLS missile tubes making for some impressive if short lived barrages. 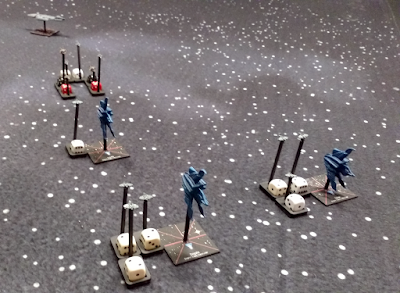 As this exchange of death began in earnest, at the other end of the battlespace a more sedate combat was taking place. For the first few minutes the Dionysus (Valkyrie Class Light Battlestar) failed to land a single hit on the Ingata (Sharlin Class Warcruiser). Frustrated, the Colonial commander added the throw weight of his point defence hoping for a hit on the difficult to target Minbari. Finally a single battery found the mark, though it was only a PD battery and failed to achieve notable damage. Meanwhile the Neutron Lasers of the three Sharlins struck home causing no less than four criticals on the port flight pod and two on the engine section. These criticals would see the complete destruction of the port flight pod (including the port thrusters!) and the disabling of the STL drives of the battlestar. As if to add insult to injury the Minbari pulled back the Nial squadrons attempting to draw the attacking Vipers and Raptors into range of the Sharlin's Fusion Cannons. 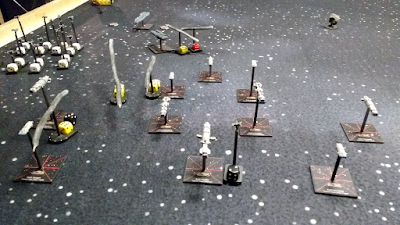 What was already a vicious firefight on the other flank was quickly turning into an uncivilized melee. The two fleets had now closed the range such that the Earth Force ships could bring their shorter ranged weapons into the fray. The trading of shots brought about tremendous damage to both sides. In the ensuing firefight the EAS Maelstrom (Nova Class Dreadnought Beta Model) had her entire front torn apart followed by the EAS Daedalus (Marathon Class Cruiser) suffering the same fate. Moments later the main batteries of the Sovereign (Apollo Class Heavy Gun Cruiser) slammed into the bow of the EAS Foxfire (Warlock Class Destroyer), the flagship of the entire ISA fleet. These heavy penetrating railgun rounds tore two thirds of the way down the length of the ship rending holes big enough to fly starfuries through. Miraculously the Foxfire managed to maintain a semblance of structural integrity but lost her forward Heavy Particle Cannons and railguns to critical damage. In return the Earth Force fleet fired everything they had left at the Basilisk (Kopis Class Fast Destroyer). The weight of the incoming fire tore armour plate, structural members, and entire weapon batteries off the "little" destroyer. 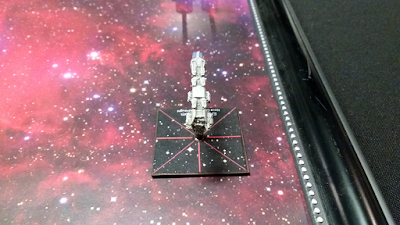 Not finished with each other yet, the fighters and missiles of the two fleets found their targets. The EAS Maelstrom (Nova Class Dreadnought Beta Model) disintegrated under a barrage of GM-201 Missiles. The already damaged Basilisk (Kopis Class Fast Destroyer) was crippled through a combination of missiles and the entire starfury compliment of the Earth Force ships. 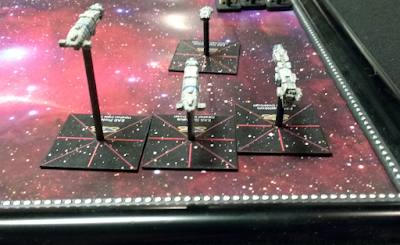 Sequential barrages of the Colonial GM-201 missiles hit the EAS Daedalus and Proteus (Marathon Class Cruiser) splitting them in half. Finally a salvo of GMN-568 "Ragnarok" nuclear missiles hit the hapless EAS Gorgon (Cronos Class Attack Frigate). All that remained was an expanding cloud of sub-atomic particles. 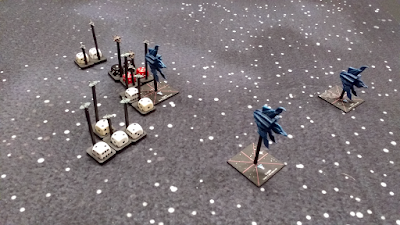 Paying little attention to the chaos that the Humans were in, the Minbari continued their pinpoint fire on the Dionysus (Valkyrie Class Light Battlestar). Neutron Lasers streaked across the armour of the battlestar knocking out secondary systems but failing to cripple the behemoth. As green beams of death lit up the vacuum, the Vipers and Raptors closed with their target. Softening up the Ingata (Sharlin Class Warcruiser), the Dionysus' batteries tore through the crystal structure of the ship paving the way for the fighters to land their ordinance. 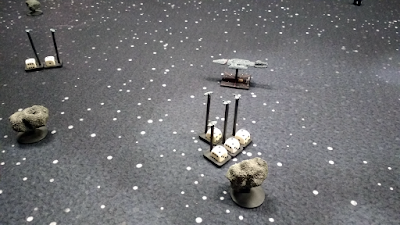 With the Dionysus (Valkyrie Class Light Battlestar) unable to effectively maneuver thanks to her lack of port thrusters and STL drives, two groups of Nial fighters moved in for the kill. Whether their stealth fields would save them from the flak field was open to debate. 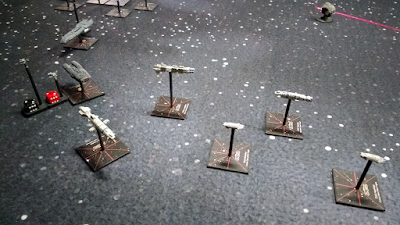 Now at knife fighting range, the Earth Force ships gave everything they had in an attempt to stop the Sovereign (Apollo Class Heavy Gun Cruiser). The remaining firepower at their disposal achieved little more than annoying the massive ship. In return the Sovereign fired all her batteries of heavy guns at the EAS Foxfire (Warlock Class Destroyer). The Foxfire had swung around, presenting her aft aspect to the ship in an attempt to put more metal in the line of fire. Round after round of starfighter size railgun shells penetrated the Foxfire coursing from one end of the ship to the other. With the volley complete the Foxfire's aft and forward sections were in shambles with her core not much better. However things were about to change... 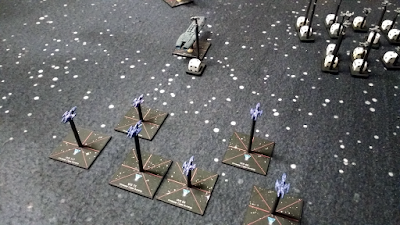 As if hearing the cries of the Earth Force ships, the six Whitestars jumped in directly behind the Sovereign (Apollo Class Heavy Gun Cruiser) and opened up. Heavy Neutron Lasers and Molecular Pulsars surged into and through the engine section of the cruiser ripping it to shreds. Shocked at the devastation these little ships had just caused, the Colonial Commander then realized that all of this was in advance of a massive fighter strike by no less than 244 Starfuries vectoring in on the same location. Unleashing particle cannon fire on a huge scale, the Starfuries tore the rear of the Sovereign clear off and continued their barrage into the core of the ship. Eventually a shot from an Aurora Starfury struck the ship's Tylium fuel reserves. This lucky (or unlucky) hit set off an explosion that would stun a primitive astronomer in some thousand years time. In mere nanoseconds the fireball consumed the Sovereign and expanded outward. Caught in an explosion of their own making every single Starfury was vaporized. As the wave front continued on its way it reached out and touched the Basilisk (Kopis Class Fast Destroyer) crumpling the rear of the ship and destroying the last of its guns. Even the Whitestars weren't safe with one outright destroyed and two crippled. Stunned by this epic display of physics a series of morale checks were required to be made. 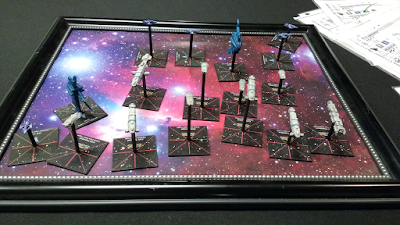 Both sides made morale checks on their remaining ships with modifiers for any sections destroyed, the loss of squadron commanders, and the loss of flagships. The total destroyed or routed on the ISA side amounted to the majority of the fleet with only a single Sharlin Class Warcruiser, one Whitestar Class Gunship, one Nova Class Dreadnought, one Marathon Class Cruiser, and one Cronos Class Attack Frigate alive and choosing to remain in the fight.

The Colonial fleet was down to a drifting and lifeless Kopis Class Fast Destroyer and a ballistic Valkyrie Class Light Battlestar. With the devastation the battle had wrought, both commanders surrendered the field to each other, incapable of pursuing the battle any further. A satisfying and cataclysmic end to a hard fought battle.

I would like to thank Simon and Kevin for a fantastic evening.