Skip to main content
Labels
Posted by Man For All Seasons September 01, 2017

Hello everyone, if you saw my last post then you know that this last weekend I hosted HoytCon 2017. This started last year as almost a joke as we dubbed my Father and I's visit to CFB Gagetown to visit my Brother and game: HoytCon. However, after two successful years in a row this has the making of an annual event.

The weekend went off without too many hitches and the timetable was adhered to within 30 minutes the entire weekend (no small feat!). Across the weekend 10 unique visitors visited my gaming emporium, participated in some fantastic games, and consumed many libations and meals. While I was thoroughly tuckered out by the weekend I would easily do it again (just give me another year guys).

As per the schedule the first game we played was a Cold War gone hot scenario set in 1984 (with Van Halen's 1984 album as soundtrack of course) using Battle Captains. 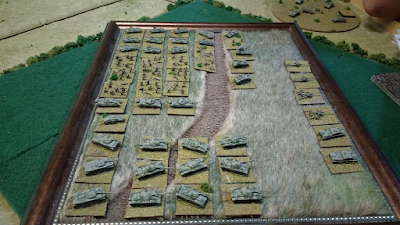 An East-German MRR infantry company with armour support was tasked with securing a village on a key secondary road intersection. 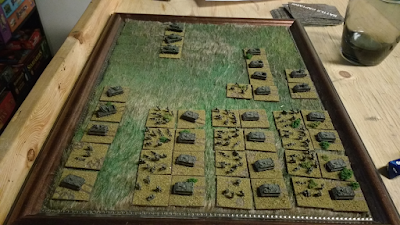 Facing the Reds was an infantry company of the Kansas National Guard recently arrived in Europe. 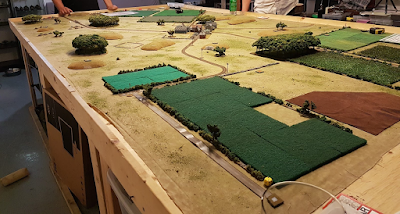 The battlefield was a whopping 12' long with various fields, woods, and criss-crossing country roads. 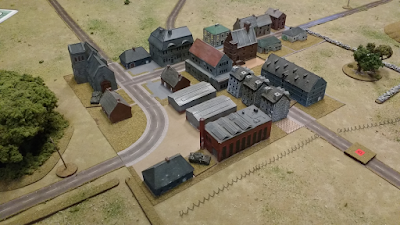 Central to the battle was this small village that began the game hosting some remnants of a US Cavalry force. The Kansas NG were tasked with relieving these hapless fellows. Upon seeing this village the Soviet player inquired as to the use of Nerve Gas artillery shells on the town but decided against it muttering something about war crimes trials. 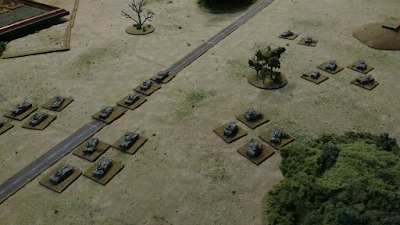 The Soviet player decided on a rapid frontal assault en-masse. 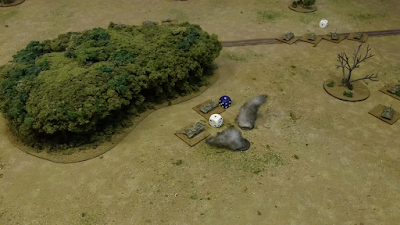 However, rapid losses at the hands of the NG broke the back of the East-Germans. At games end the Soviet player lamented that he should have just VXed the bastards.

The second game played was a platoon level combat out of Operation Bagration 1944. A German Panzergrenadier platoon was tasked with counter-attacking a Soviet held position at a small bridge. Opposing them was a platoon of Soviet infantry with a smattering of support. 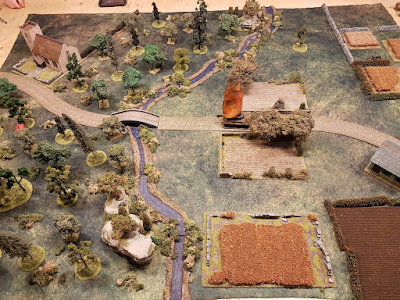 The Germans would have to move in and take the Soviet positions along the left side of the river, the burning Tiger from a previous ambush not helping morale. 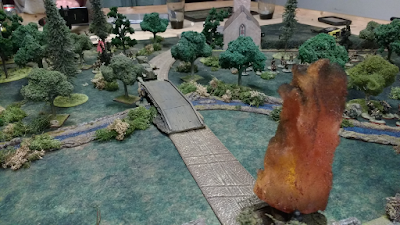 The task would not be easy as the Soviets held all the advantages. The defenders quickly moved a BA-10 armoured car into an overwatch position near the bridge. 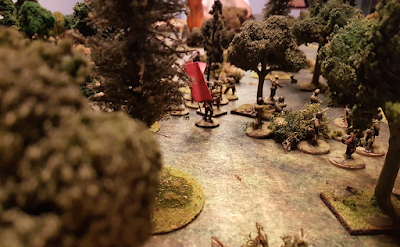 Meanwhile the tree line teamed with Soviet infantry including a submachine gun squad. 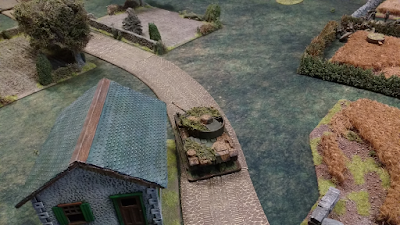 To deal with the armoured threat the Germans had brought a Panzer III along. This seriously outdated vehicle gave a good showing of itself... 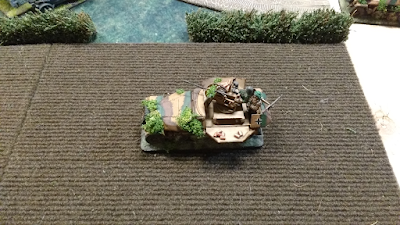 ...but not as good as the SdKfz 251/17. This MVP of the game missed only one shot the entire game with its 20mm Flak gun and forced the armoured car away. Unfortunately, this act of superior gunnery was not enough and the Germans lost this game of Chain of Command quite badly.

Saturday morning was witness to the forests of the Niagara district spring to life on the table. In this game of Sharp Practice a force of American interlopers were retreating back towards the Niagara river but were forced to burn a bridge to prevent pursuit. A force of British regulars and Upper Canada Milita needed to stop them. 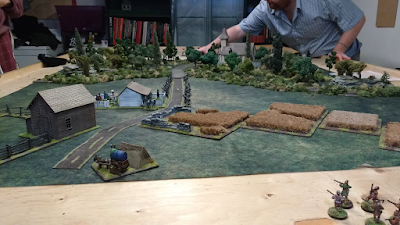 Utilizing essentially the same terrain as the previous night the groggy players were at first confused. 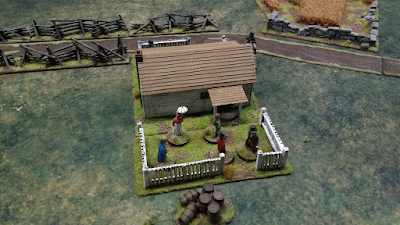 Amidst the battle a group of civilian observers were equally confused. 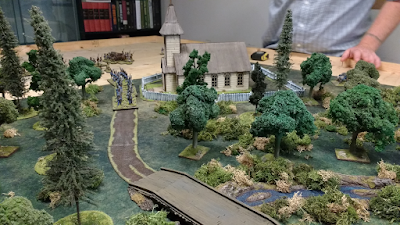 US regular infantry escorted a group of engineers to the bridge. 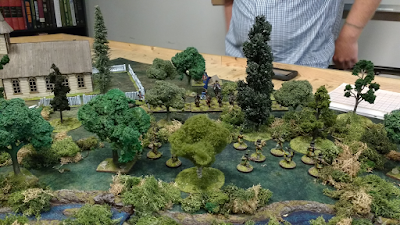 To protect the flanks of the working engineers two groups of New York State Militia moved through the trees. 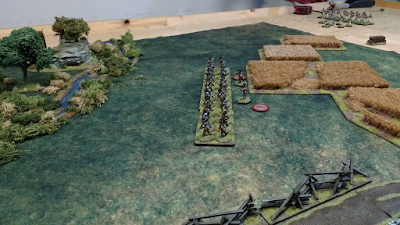 To counter this move, three companies of Upper Canada Militia deployed on the other side of the river. These militia would prove their worth, withering fire that would have impressed the Old Guard. 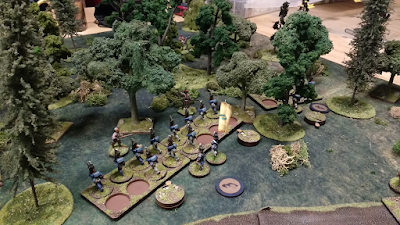 Unfortunately for the Americans, the British also had a group of Natives at their disposal. These irregulars managed to work their way across the river and into the woods on the American's right flank. The US regulars were forced to enter the woods to clear the Natives out, but the combat did not go their way. When the dust settled the US regulars were running like school children while the Native Chief had defeated the Regular's Captain in single combat and captured the standard. 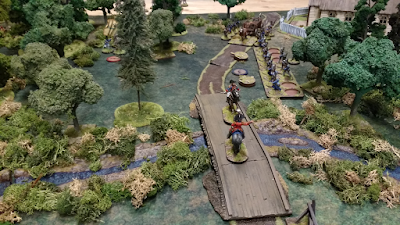 Saturday afternoon was host to an 18th century game of imaginations using Black Powder. The armies of Gourmandie and Das KaiserReich stretched across the full 12' of the table in all their glory.

The beautiful lines of these two armies stood ready for battle. 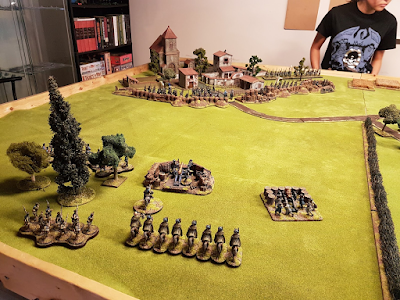 The KaiserReich right flank was anchored by a set of fortifications. 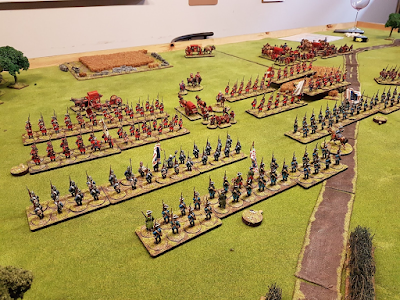 It did not take long for the two main infantry lines to meet each other amidst sweat and smoke. To the right of this action the KaiserReich cavalry in a series of spectacular actions swept aside their opposite numbers. 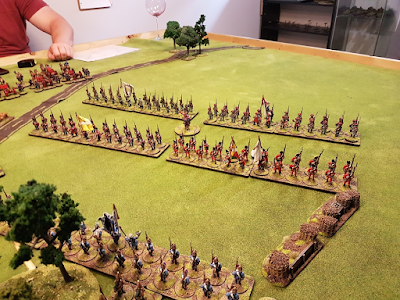 As Saturday evening approached and the fifth game of the weekend was being setup the fatigue and inebriation began to set in (we had been drinking since 09:00). This combination resulted in no pictures being taken but the game was enjoyed in any case. For this Bolt Action scenario an Heer infantry platoon was attempting to break through defending French infantry to relieve their Fallschirmjager brothers before the BEF could crush them. At the end of the game the Heer had broken the back of the French and were advancing on the large bridge separating the Germans. However, the BEF had wiped out the majority of the Luftwaffe soldiers and so the game was declared a phyrric draw.

Sunday morning my brothers rare Falklands 1982 Naval collection was pulled out and dusted off for a game of Sail, Steam, & Sky. In a surprising twist the Argentinian Navy managed to eek out a victory but not without significant losses including the Belgrano to torpedoes from the British submarine Conqueror (a perfect mirror of the historical incident). Unfortunately this tense and satisfying game was also a victim of the forgotten camera.

By Sunday afternoon we were approaching game seven and certainly feeling the effects. Thankfully the final game was an easy one, Star Wars! An Imperial task force centered on a heavy cruiser had been trapped by a rare Rebel Interdictor and had to fight their way out. The Rebel motley group needed to destroy sufficient Imperial vessels without losing the interdictor. What started as an ordered long range duel by these small capital ships quickly devolved into a short range melee that ultimately resulted in a Rebel victory in spectacular fashion as the largest Imperial ship was penetrated numerous times by fighter launched proton torpedoes. At this point I shouldn't have to tell the reader that as the pattern now shows, we completely forgot to take pictures (sigh).

Overall the weekend was great experience and a fun way to introduce different gaming groups to each other. The participants home bases ranged from Toronto, Ottawa, and as far away as New Brunswick. Remember for the next time you see me organizing an event like this, if you want in just ask!