Skip to main content
Labels
Posted by Man For All Seasons January 06, 2018

Happy New Year everyone and welcome to my first post of 2018. To celebrate the new year and give some new models a good blooding, I had a horde of gamers over today. Adam had recently received and painted some new Romulan models and thus we had to get them some table time. Seeing as he has not yet received his D'Deridexes and Mogais from Eaglemoss, I would supplement his fleet with my warbirds. Facing the might of the Romulan Navy would be a selection of my Starfleet ships.

Counter to my usual behavior I did not concoct some elaborate scenario or backstory for the game, rather we lined up the fleets and had at 'er.

The Romulan Armada consisted of the following:

The Starfleet force consisted of the following:


The two fleets were arrayed against each other across the table from each other ready to duke it out. 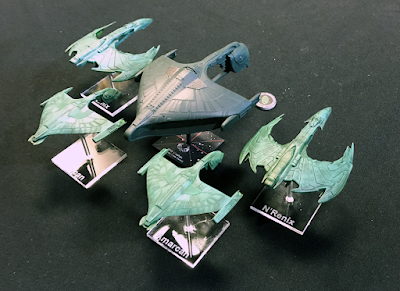 On the Romulan right flank, a strike group of the two N'Renixes, two of the Amarcans, and one of the D'Deridexes deployed to screen Starfleet's movements on the far side of the asteroid field. 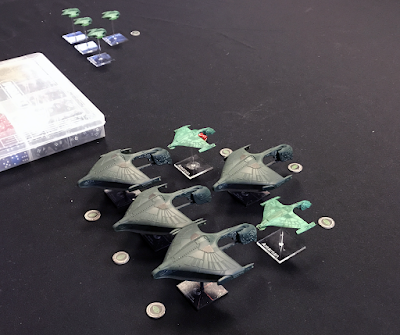 In the center the Romulans positioned a heavy group of four D'Deridexes with two Amarcans facing Starfleet's center. To their left was an independent light group of the torpedo heavy D'Tavans. 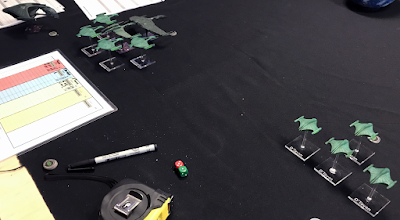 On the Romulan left flank, a fast attack group  of the four Draconarius', the D'Sera, and the Mogai aimed to swing around the planet. To their rear sat the fleet commander in a lone D'Deridex. 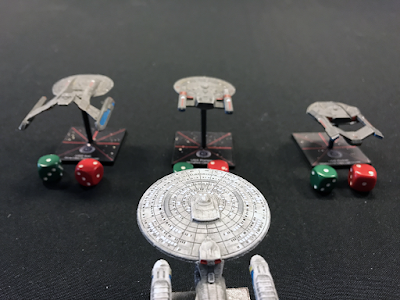 Pointed at the Romulan center Starfleet had placed the Ambassador, the Akira, the Springfield, and the Steamrunner. 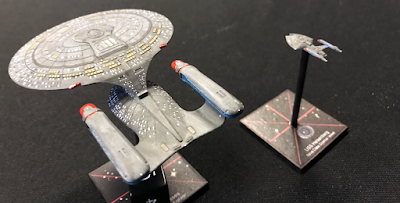 To their right was the fleet commander in the Galaxy, escorted by a tiny Nova Class (look at it, its so cute!) 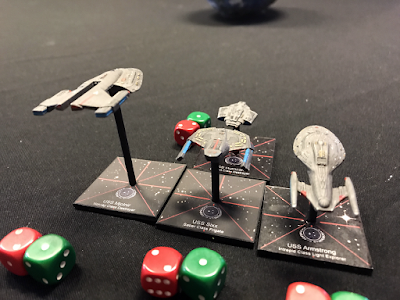 Opposite the Romulan left flank was a high maneuver group consisting of the Defiant, the Norway, the Saber, and the Intrepid. They immediately began evasive maneuvers. 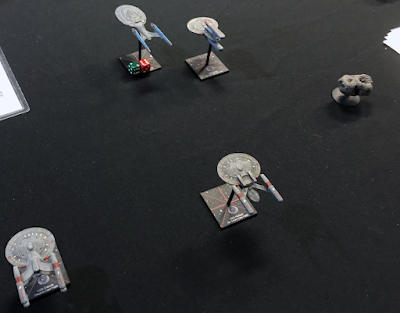 To counter the Romulan moves on the other side of the asteroid field, Starfleet deployed the Sovereign, the Challenger, the New Orleans, and the Cheyenne. 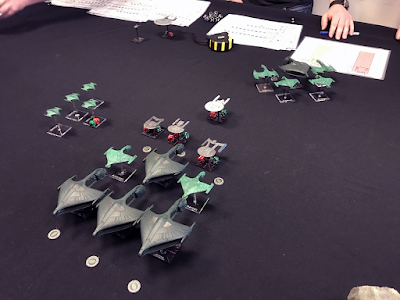 As the opening turns were conducted, neither side wasted time closing the distance. The Romulan and Starfleet centers moved in close. Starfleet loosed torpedoes at empty space hoping to get lucky, with very little luck finding its way to them. The D'Tavan torpedo group swung in from the left hoping to get some flank shots. However, with fortuitous foresight, the commander of the targeted Starfleet squadron had pushed his ships to their engineering limit performing wild evasive maneuvers and taxing the impulse engines to the max. While vomit had to be cleaned off the consoles, these crazy moves saved the ships from the onslaught. Meanwhile, the Romulan right flank, acting only as Romulans would, abandoned their face-off with Starfleet's left flank and performed a micro warp jump to the center placing the Galaxy Class under threat. 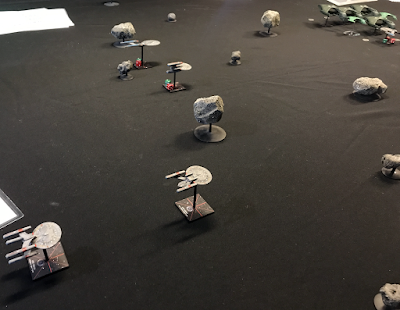 This left the Sovereign and her escorts to turn hard to starboard and navigate the asteroid field in order to rejoin the fight. This is the point where the rest of Starfleet began to wonder where a third of their fleet was. 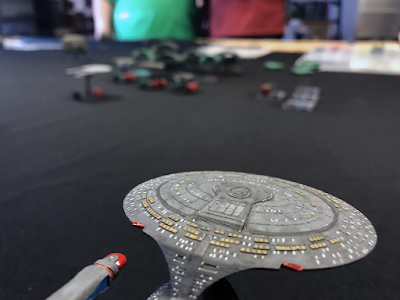 From the perspective of the flag bridge things were not looking good. Romulans started to decloak, and while phasers and torpedoes were finding their mark, the Romulans had achieved local superiority. Worse, it appeared as though they would also achieve a breakthrough in the center and move for a decapitating strike.

At least on Starfleet's right flank the situation was a little more tenable. The Defiant and her cavalry group were tussling with the Mogai and her escorts. The two players on this flank described their interactions as two shadowed strangers lightly caressing each other as they passed by. This soft interplay was all too brief as the closing speed of two groups at full impulse was enough to send them hurtling past each other. 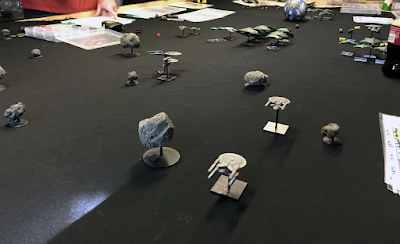 The decline of the overall situation was eminently evident to the Sovereign from her far off position. From here she witnessed the Romulan center and left flanks sail past the Starfleet defenders and begin targeting the Galaxy. 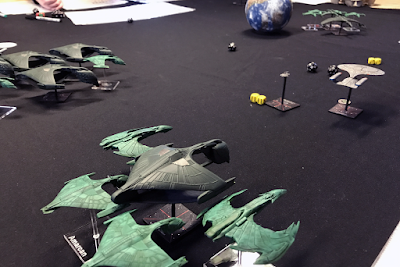 Although she could not truly imagine the vice this mighty ship was being placed in, everywhere she looked Romulan warships closed in on the Galaxy's position.

The center group had emerged from the dogfight having lost only the Springfield, but their impulse engines and RCS thrusters had been severely compromised from their wild maneuvers, no help their. The Defiant and her sisters had passed by the Romulan left flank with barely a wave and were now focused on the Romulan flagship, no help there. The Sovereign and her escorts had just emerged from the asteroid field but their warp drives needed precious seconds to spool up, no help there. She was all on her own except for a lone science vessel. One tiny science vessel against 10 times her number in warbirds. In a bout of heroism far beyond her stature, the Nova turned into the Romulan fleet and flew directly into a salvo of plasma torpedoes intended for the Galaxy, saving her. 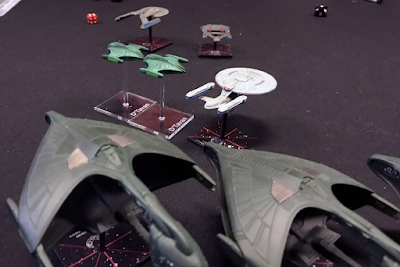 It was not just the Nova doing all they could to save their flagship. Behind the Romulan center, the nearly drifting Starfleet center squadron turned as best they could, releasing every aft torpedo and phaser they could muster. At this range the Romulan behemoths were difficult to miss and serious damage was inflicted on two D'Deridexes as well as destroying two of the D'Tavans. 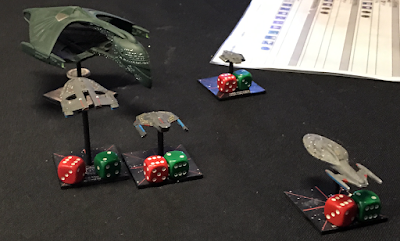 Believing they were helping, the Defiant and her squadron were attempting to engage the Romulan flagship. But being Romulan, this ship refused to decloak and simply danced among them, as much as a warbird can dance. 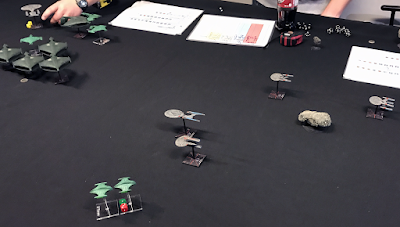 The sacrifice of the Nova had bought seconds of life for the flagship allowing the Sovereign and her group to jump into the rear of the Romulan lines but she needed more than just seconds and a few powerful reinforcements, she needed a miracle, a miracle that would not come. 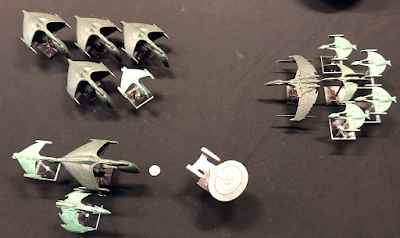 Almost out of spite, the Romulans did not unload every weapon at their disposal at the Galaxy, simply loosing enough plasma torpedoes to do the job. Tactically, they were not wasting ammunition and charging time in expectation of their next targets, emotionally it felt cavalier and almost patronizing, entirely Romulan. 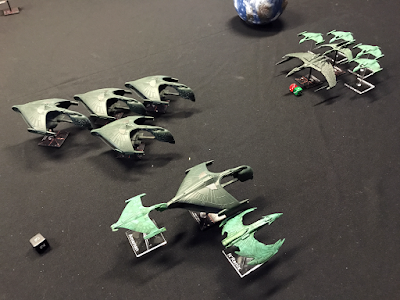 With barely a whimper, the mighty symbol of Starfleet's glory was gone. 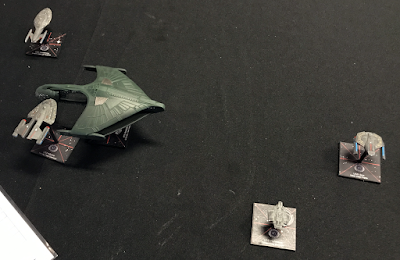 The Defiant and her group finally seemed to notice the havoc occurring in the center and turned away from the Romulan flagship. It was only at this point that she decided to uncloak and ate a Norway for breakfast. However, things got a lot worse. Seeing their flagship destroyed, half the Starfleet force turned tail and warped out of the system leaving only the Sovereign, the New Orleans, the Akira, the Defiant, and the Intrepid to enact revenge. 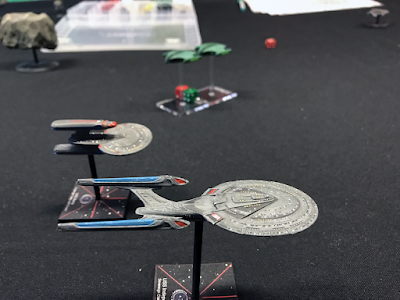 Taking control of the fleet the Captain of the Sovereign, now in a rage, ordered the remaining ships (the patriots as he termed them) to close with and destroy the Romulans. In a flurry of phaser and torpedo fire, the Sovereign claimed the remaining two D'Tavans and one D'Deridex in only the seconds it would take to say their names. 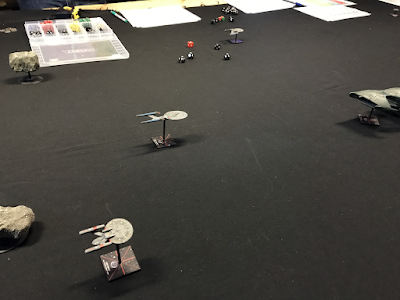 This began a stern chase with a Sovereign pursuing most of the Romulan fleet that brought images of Han Solo on the Death Star.

Seeming eager to join this crazed ship, the Defiant and Intrepid raced back down the way they had come to help. 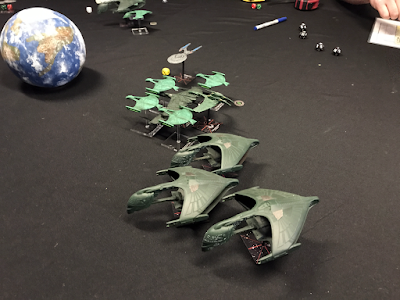 Against all odds and outnumbered 9:1, the Sovereign managed to maneuver outside the Romulan fore or aft arcs (their sides being the weakest) and eviscerated the Mogai in bare moments. Seeing their squadron commander torn apart, two of the four escorts of the Mogai cloaked and retreated. However one crazy ship could not fight the entire fleet. Aft torpedoes from the warbirds ripped the New Orleans in half leaving the Sovereign un-escorted. 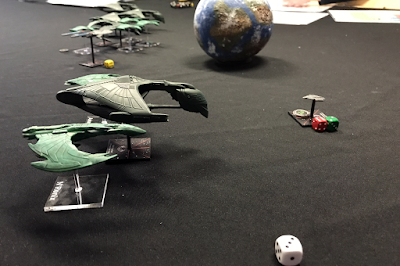 Taking a cue from the Sovereign, the Defiant and Intrepid charged at the other Romulan squadron. Within seconds the Intrepid was an expanding cloud of gas. But, whether infected by the enthusiasm of the Sovereign, or just over estimating the abilities of his ship, the Defiant's Captain stayed on course, right into a storm of plasma torpedoes. With a flash she was gone. 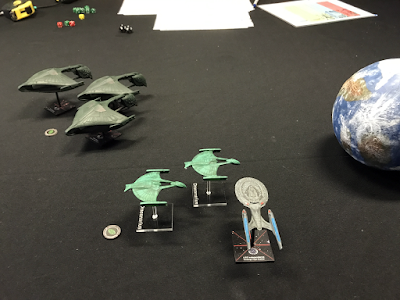 With that final explosion the Sovereign was alone. Undeterred, the Captain continued to issue combat orders oblivious to the questioning looks from his bridge crew. After a tense few moments the XO escorted the Captain off the bridge. The Sovereign streaked into warp. The game was over.

I would like to thank Adam, Gislain, Kevin, Matt, Patrick, and Lia for one hell of a way to open up the new year. Here's to many more!