Skip to main content
Posted by Man For All Seasons January 02, 2020

Happy New Year everyone! Seeing as how we have begun a new decade I thought I would take a look back at what I have accomplished in this hobby in recent years. This will be an entirely self-serving series of posts intended more for me to take stock of my accomplishments but others may get a small level of enjoyment from the pictures.

Scouring the archives I discovered that my first post on this blog was January 20, 2010. I really have been doing this for a decade. Please don't go back and read that first post, it is thoroughly embarrassing.

For this post I will be reviewing my Starship Gaming collections, easily the most shelf space occupying project I pursue. Over the past ten years there have been many fleets and genres that have been started, completed, and then cast aside. The biggest change over the decade has been my embracing of 3D printing. This monumental change to model production has rendered many of my old fleets useless and consigned to the garbage bin. Of most of these projects, little to no photographic evidence remains to highlight the lack of skill involved in their execution.

In the process of taking the photos for this post I have setup galleries on the blog to keep track of the current status of my projects. As I add models and fleets my intention is to keep these galleries up to date, more for my own SA than anything else. There are fleet pictures as well as closeups of the individual models. The galleries can be found on the main page or here:

Easily the oldest of my projects, I have been collecting Babylon 5 miniatures since the 20th century when I was but a teenager. In fact the first fleet I ever collected was Centauri, some of which (after many repaints) still remains in the collection.

Were I to count unpainted figures as part of the collection (a notion that would make my father quite irate), my Centauri fleet would be ~five times this size. 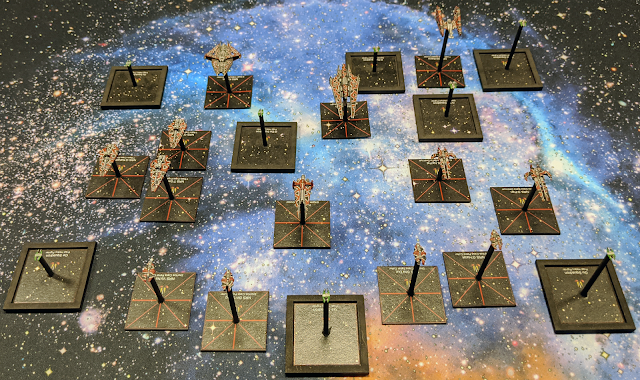 Like the Centauri, my Narn fleet would be many times larger if I ever get the rest of the fleet completed. The major roadblock is the intricate paint job these require and the fact that I will not compromise on the detail I put in. Properly done Narn ships are too pretty not to want the entire fleet to be so. 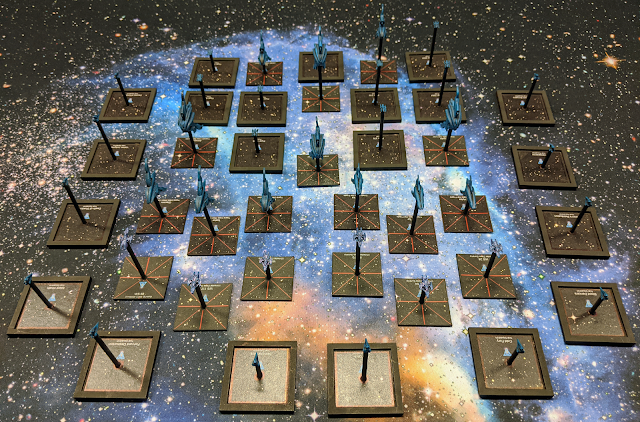 My Minbari fleet is easily the most powerful of my younger race fleets. Again what you see here is but a fraction of the total miniatures I have lying around. The primary stumbling block for the boneheads is motivating myself to paint the other 50 or so models when the amount I currently have is already overkill. What was I thinking I needed 24 Sharlins for?

My Earth fleet I split into three eras with some models appearing in each of the eras. This configuration is for the 2240s, i.e. the Earth-Minbari War. With a little tweaking it can also be used for the Dilgar War.

The largest configuration of Earth I have is for the 2250s ish. This covers the show itself and importantly the Earth Civil War. 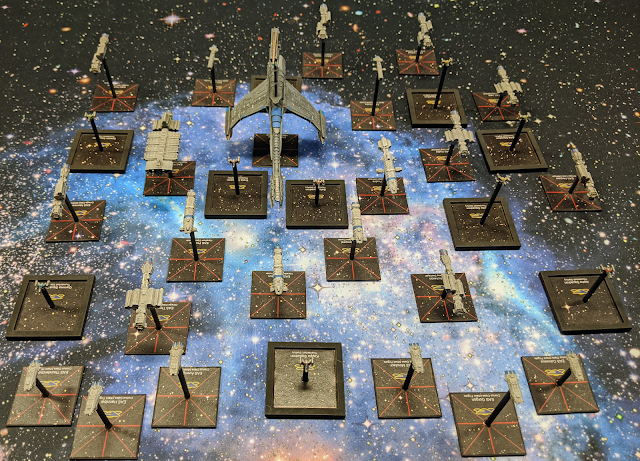 Finally I have what I call my advanced Earth suitable to cover the ISA-Centauri War and the Crusade era. This fleet gets the most use in cross universe play against technologically advanced opponents such as Star Trek. 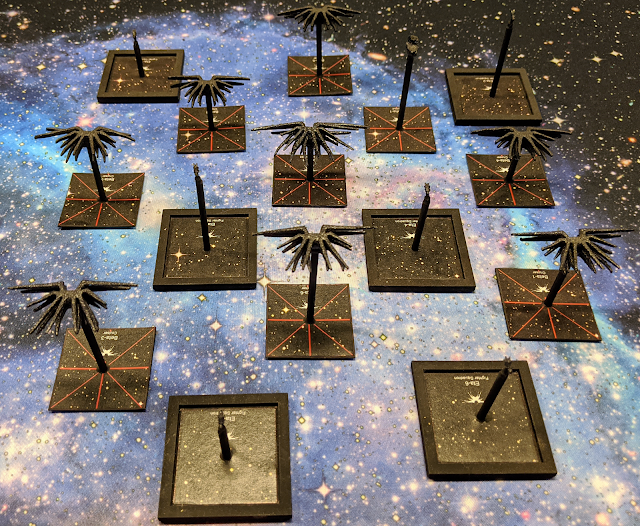 No Babylon 5 player can consider their collection complete until they can field Shadows. This may not seem like that many figures but seven cruisers and a dreadnought can wipe out any of my other fleets with ease. I consider this fleet complete.

In addition to these fleets I have a Vorlon fleet that mostly just needs some repairs and re-basing as well as a substantial Drazi fleet and Hyach fleet in need of paint. Also there is a Vree fleet sitting on my painting desk that my wife is slowly making her way through.

I have been a fan of the re-imagined BSG since it first aired nearing 20 years ago but only seriously started modeling it in the past five. The only reason I don't game with it more is due to the massive size of these vessels and the relatively simplistic tactics imposed by the inclusion of the Cylons. 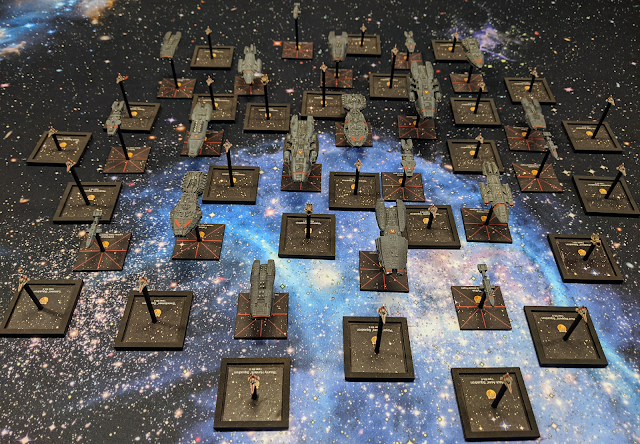 Like my Earthforce fleet, I have separated my Colonial fleet into two configurations. This configuration is for the 1st Cylon War. Included in this fleet are a number of pre-Cylon designs that are truly terrible ships, which of course makes them my favorite. 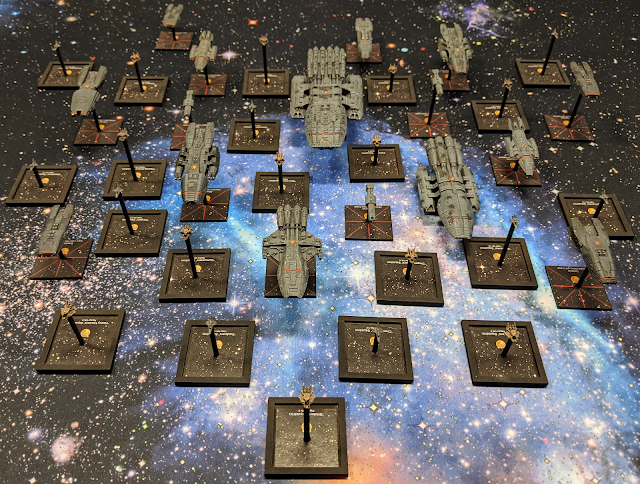 The second configuration is for the 2nd Cylon War and includes many ships from the previous set but now has much newer and advanced designs. This configuration rarely gets any play due to the nature of the 2nd war making it a true shelf queen. 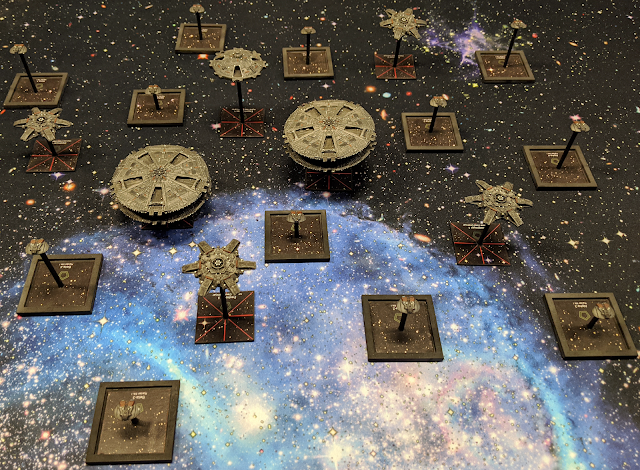 My Cylons also have two configurations but without any overlap. This setup is for the 1st Cylon war and includes the classic double disc basestars. I prefer this fleet to the later one as at least this fleet has more advanced tactics then 'shoot the missiles and charge'. 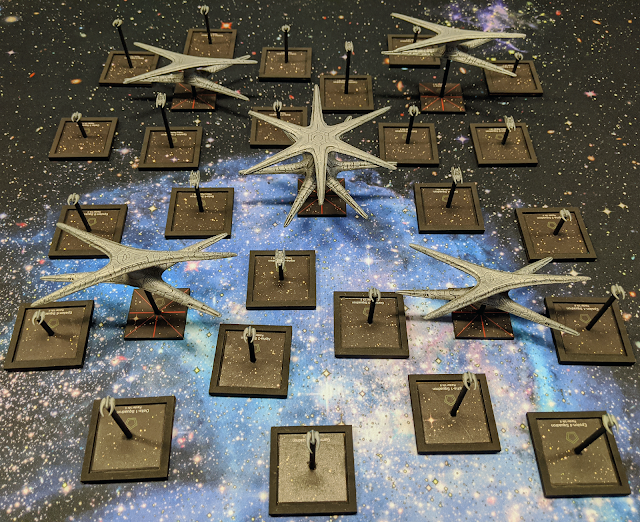 Like my 2nd Cylon War Colonials, this fleet setup gets little play time and mostly occupies a shelf in my gaming room. That being said the modern Cylons do look good on a shelf.

I have had a love affair with Star Trek for as long as I can remember. Some of my first memories are of watching TNG as it aired with my father. However, for much of the past 25 years of my gaming career it has been difficult to acquire quality models for many of the ships in the show. What was available was difficult to acquire, low detail, or horrendously out of scale (something I will not tolerate). 3D printing solved most of this in the past few years and it was seeing beautiful Starfleet models on Shapeways that kickstarted my dive into revamping all my fleets. Within a few short years, collections I had been proud of not long before had been tossed aside and replaced with printed replacements. That process is still ongoing. 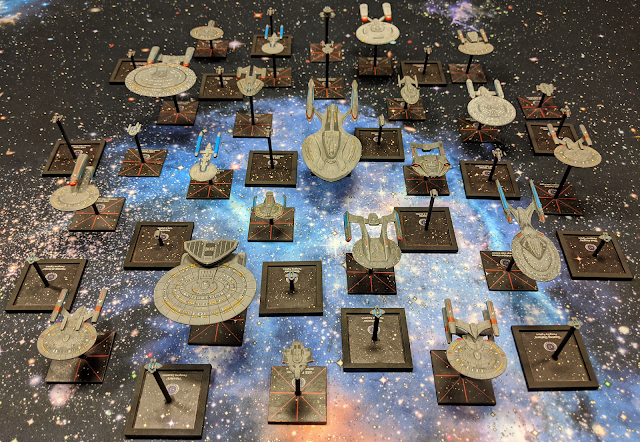 This is my second Starfleet collection, the first having been collected from a myriad of sources in an attempt to keep it all to scale. That collection is in a landfill somewhere. Over the past two years I have, two or three models at a time, built up a motley collection of hulls and am aiming for a fleet of 112 ships. There are ~20 models sitting waiting for my attention at this very moment. Included in this fleet is the very first 3D print I ever purchased, the lovely Cheyenne Class Frigate. 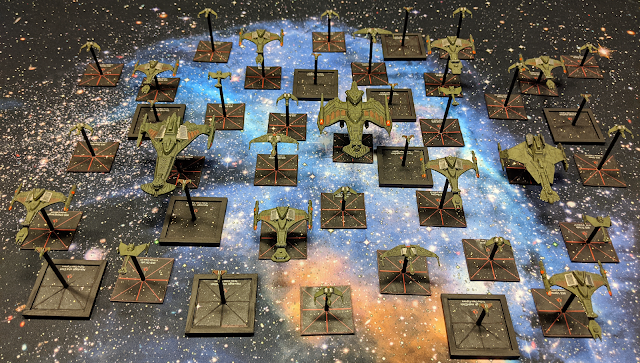 Like my Starfleet, this Klingon fleet is actually my second. The old fleet was not half bad but I am a perfectionist at heart and I couldn't resist some of the oddball ships I was able to acquire. 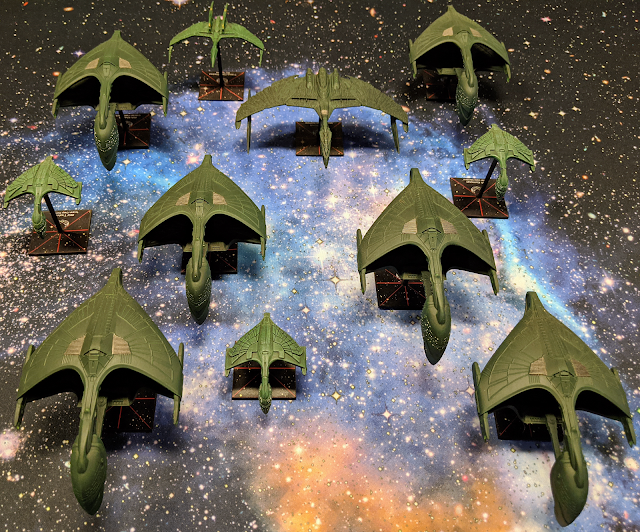 Oddly the Romulan fleet currently includes no 3D prints in it. The Warbirds are all from Eaglemoss and the smaller ships are modifications of Attack Wing models. There are a number of printed models I wish to add but simply haven't been at the top of my list.

In addition to these fleets I still have lying around a Cardassian and Dominion fleet from the old days that I haven't disposed of yet. I have 3D prints in mind to replace them as well as a Breen fleet planned out. Looking beyond the Dominion War I also have planned out Kirk era and Earth-Romulan War era fleets.

While I am a bigger Star Trek fan than Star Wars fan I have always enjoyed the tactical environment of Star Wars more. Just a few years ago I was excited to have a 1/10,000 Star Wars collection, primarily from Odyssey Slipways. However, I sold off all those models in favor of completely replacing the collection, not so much for detail but so I could do it in 1/7000, the same scale as my Star Trek fleets. 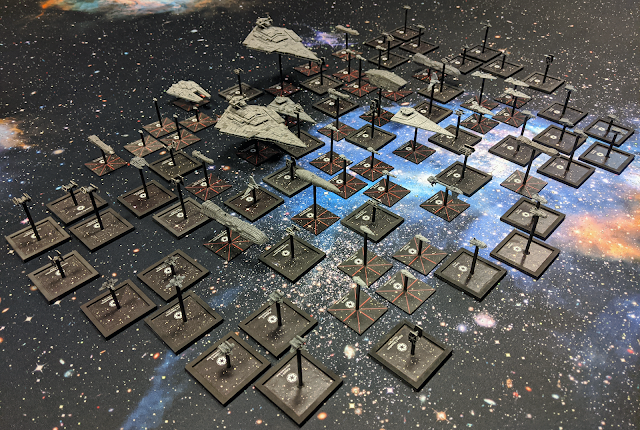 My Galactic Empire fleet has grown considerably in the last few years and has a few more models awaiting my attention. Primary among these is my Imperial Class Star Destroyer. My favorite part of this fleet is the variety of starfighters I have collected. 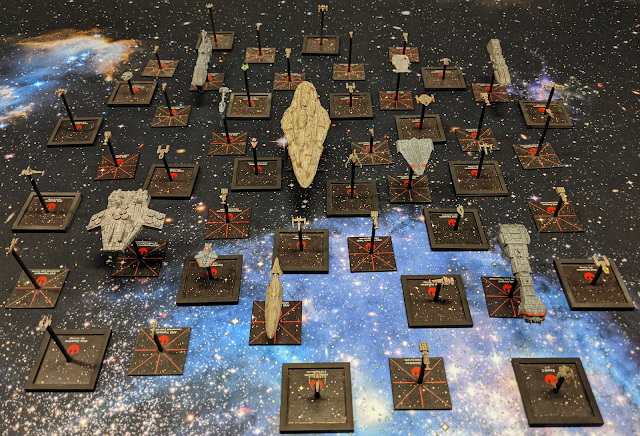 The Rebels appear to be lagging behind the Imperials by a considerable margin but this is countered by the number of models they have waiting on my painting desk including a Venator and Dauntless Class Star Destroyer. I have tried to make sure that when I field the Rebels they have as many types of starfighters as possible to give that raided junkyard feel. 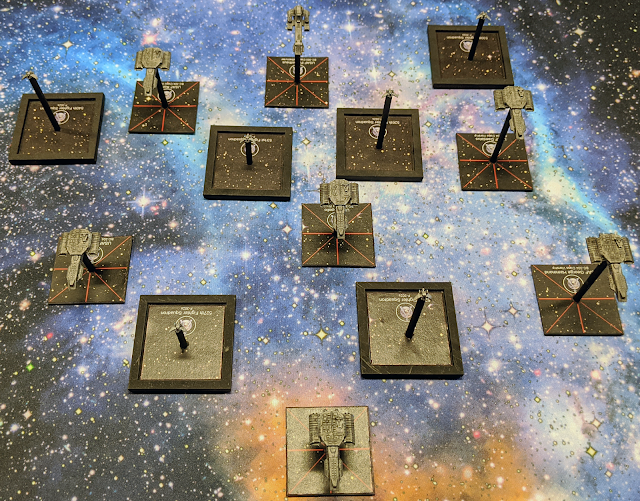 The cheap part of the project is the Tau'ri. The ships are small and it only takes seven models to represent their entire navy (or airforce?). The Goa'uld are going to be an entirely different matter, motherships are massive. 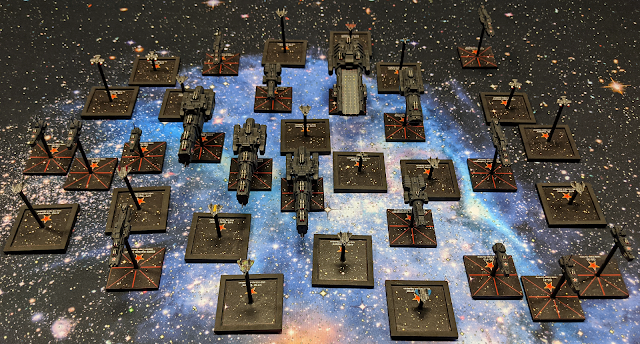 For custom fleet games among my gaming friends I needed a personal fleet and decided on the Neo-Soviets from Brigade Models. Keeping the Soviet theme I created the Earth Soviet Republic and got a starter fleet. The fighters came from Iron Wing Metals (mostly I just had them lying around from some long forgotten project). 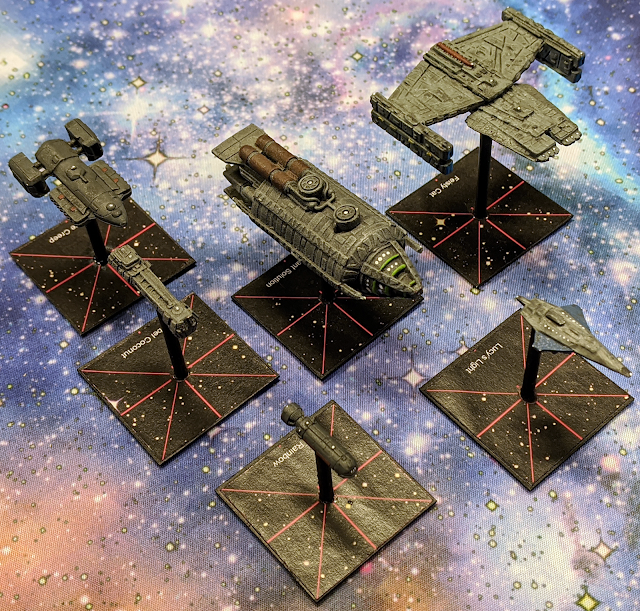 In a random act of boredom last year I went searching through my bits box for civilian vessels. Grabbing the six most interesting models I painted them up to serve as 'targets' in scenario games. My merchant fleet now includes the 'Rainbow', 'Lucy's Light', 'Feisty Cat', 'Rebel Coconut', 'Feature Creep', and 'Inelegant Solution'.

There are countless one-offs and squadrons of ships lying about my gaming room but I decided to only highlight those projects far enough along to warrant pictures. There is an entire Warhammer 40K project waiting to get done that I haven't even talked about. All in all I feel like my collection has grown over the past decade, though perhaps not by as much as the time would warrant. However, the quality has increased substantially. Little things like making all the basing consistent, applying custom labels to every base, and redoing terrain can mask the effort that was actually applied to the projects. I have to say I am happy with what I have accomplished but I have so much more to do.
Email Post