Skip to main content
Labels
Posted by Man For All Seasons March 31, 2020

Good evening everyone; I hope that in these difficult times you are all healthy, safe, and importantly not too bored. Like many others I have attempted to take this time to clear out models that have clogged my painting area for too long. As always, the tiny babbling person (who's word for every object, person, and concept is Dada) in my life has made that more difficult than it otherwise would be. Nonetheless, I have managed to significantly increase the size of my painted Star Wars fleets. The canny among you may notice that some ships are classified different than you would find on a Star Wars wiki. This is because I have classified all the ships in the Anaxes War College classification system as it's much more consistent than the seemingly random, probably colloquial, titles given to many ships. The Rebel Assault Frigate, for example, is huge compared to most frigates and should properly be called a Heavy Cruiser. 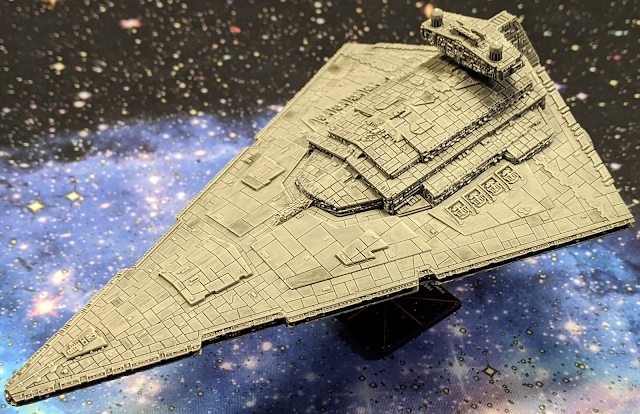 Starting off with the largest model in my collection, the massive Imperial Class Star Destroyer, HIMS Adamant, is the center point of my Imperial fleet. As much as I love this model for the firepower it brings, I love it more because of how ridiculously big it is in comparison to everything else. It is hard to mentally picture the scale difference between a tiny corvette and this monster until they are side by side on the table in the same scale. I am also lucky that I have managed to collect such a diverse fleet all in 1/7000 scale (or very close to it), allowing this thing's size to be truly seen. At this point I have my method for painting standard Imperial grey pretty much to a science but this model is so large that painting the lights took longer than the rest of the model. 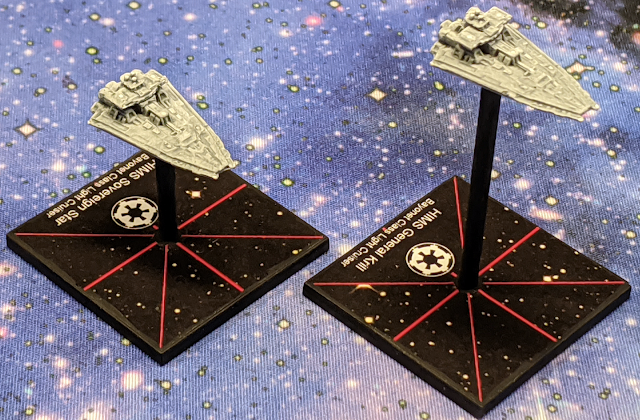 Next are the HIMS General Krill and Sovereign Star, Bayonet Class Frigates. I had not really given much thought to the Bayonet until perusing the available models at Utar Ships. In hindsight I should have gotten one sooner. This impressive little ship is armed with heavy turbolasers giving a nice ranged punch in a frigate sized package.

The Bayonet Class Frigate is an Utar Ships model and can be found here. 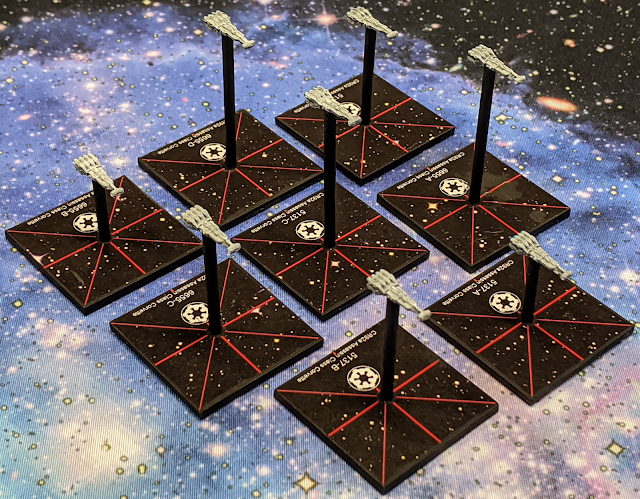 Squadron 5137 and 6655 add some light screening forces to my fleet. The CR92a Assassin Class Corvette is a ship that I have wanted for my Imperials since I began this project. A militarized CR90, the Assassin comes loaded with better armor and a proton torpedo launcher. Unfortunately, years of searching for a 3D print in 1/7000 proved fruitless. Enter Utar Ships who makes a very nice model.

The CR92a Assassin Class Corvette is an Utar Ships model and can be found here. 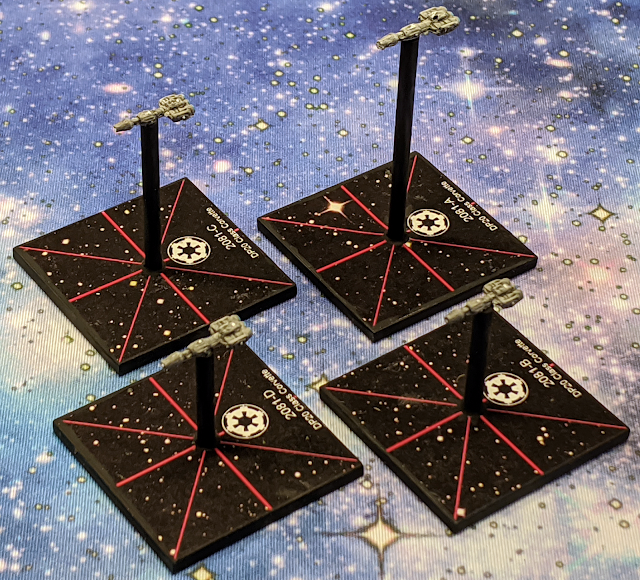 Squadron 2081 packs a lot of heat in only four little ships. Along with the Assassin, the DP20 Class Corvette is my favorite corvette sized ship. These awesome little gunboats pack exceptional firepower along with concussion missile launchers and fantastic maneuverability. Having failed to find a 3D print, Utar Ships once again saved the day.

The DP20 Class Corvette is an Utar Ships model and can be found here. 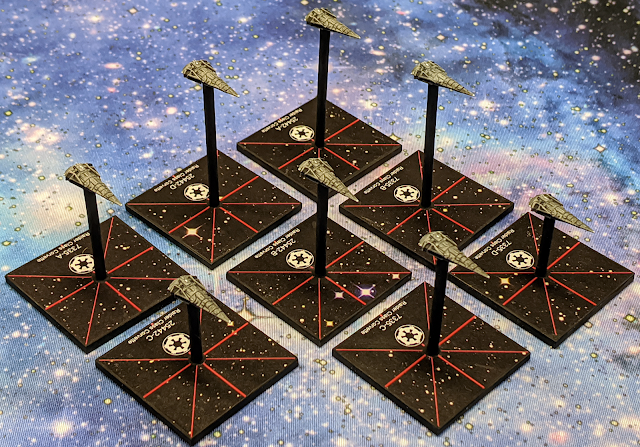 Rounding out my light forces are Squadron 7335 and 25442. The Raider is a ship that I have a familiarity with but unfortunately I never played any of the games which featured it. Still, I had to have it as I like the idea of a diverse model collection and frankly they look cool. This little ship feels like a more modern CR90 and better in almost every regard.

The Raider Class Corvette is a Shapeways print and can be found here. 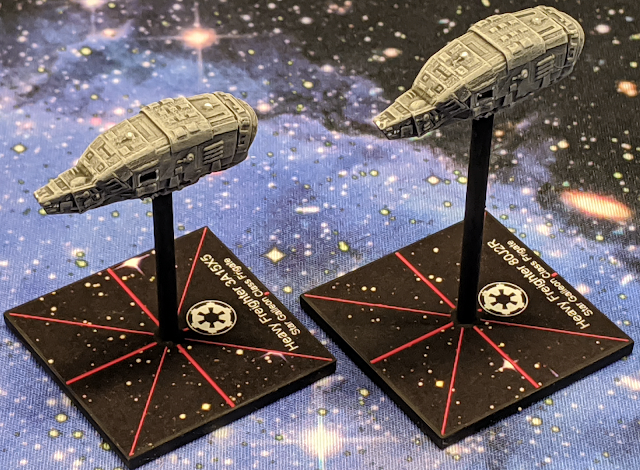 Heavy Freighter 3A15X5 and 80J2R add some lift capacity to the fleet. Now that my Star Wars fleets are big enough I needed to start thinking of auxiliary craft and other assets useful for scenarios. The Star Galleon is an Imperial transport vessel/frigate. The idea being that these being mixed in with normal freighters provide protection while still contributing to the lift capacity of a convoy. The idea doesn't really make sense in the real world but neither do lightsabers.

The Star Galleon Class Frigate is an Utar Ships model and can be found here. 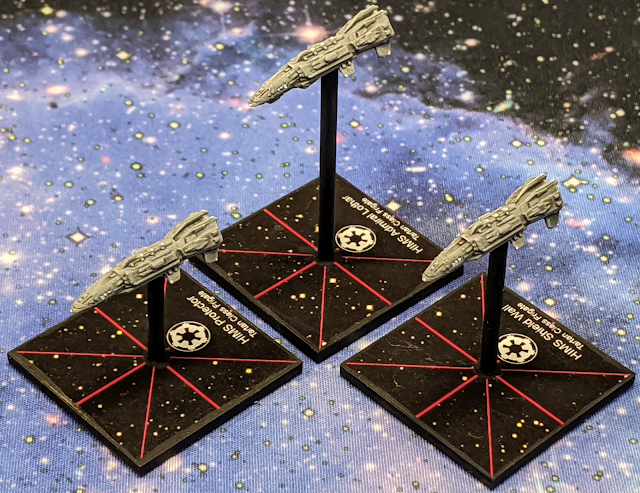 The HIMS Protector, Admiral Lothar, and Shield Wall join my Lancer Frigates in protecting the command ships of the fleet. The Tartan Class Frigate is a ship I have wanted for a while specifically because it is worse at its job than the Lancer. It is faster but its PD armament is weaker. I don't always want the most powerful ships.

The Tartan Class Frigate is an Utar Ships model and can be found here. 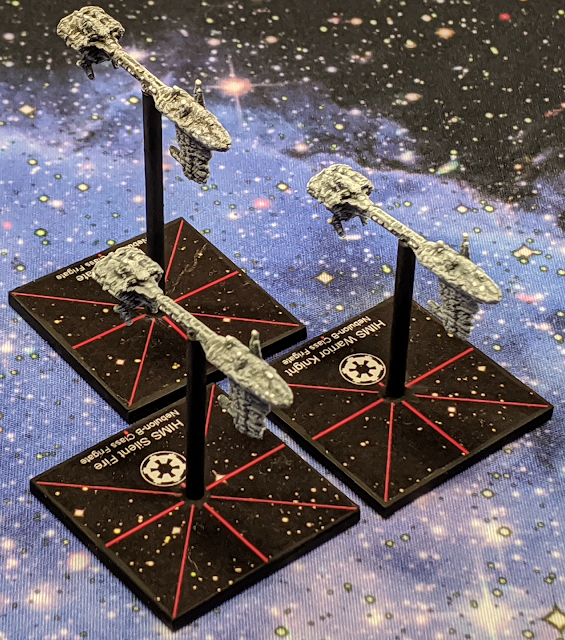 Finally, the HIMS Dictate, Warrior Knight, and Silent Fire join the Praetor among my frigate line. I already had one Nebulon-B Class Frigate but needed more.

The Nebulon-B Class Frigate is from Shapeways and can be found here.

This brings my Imperial fleet up to an impressive size of 83 ships. I still have plans for more; there are classes I do not yet have like the Vigil Frigate or the Gladiator Heavy Cruiser but for now I am happy. I have updated my gallery page for my Star Wars fleets; if you want to see detailed pictures of the entire fleet go here. 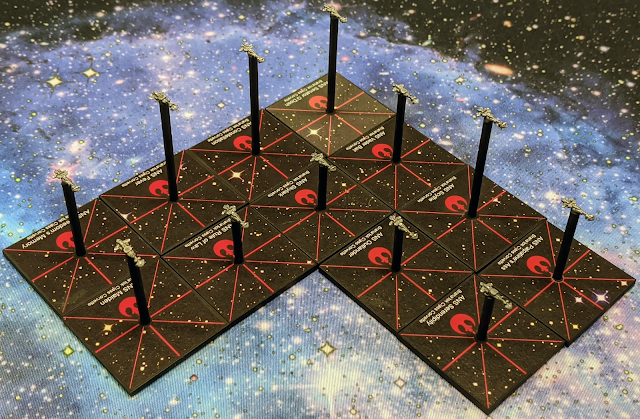 The ANS Outlander, Palpatine's Ass, Skylark, Constellation, Rule of Law, Serendipity, Freedom's Memory, Maiden, Fever, Scythe, Vader Bait, and Senator G'Dosh greatly expand the motley corvette collection of my Rebel fleet. These Braha'tok Class Corvettes are a seldom remembered background ship seen in Return of the Jedi. In the expanded canon there were only three in the entire Rebel fleet but the pack I got included 12 so to hell with canon.

The Braha'tok Class Corvette is from Shapeways and can be found here. 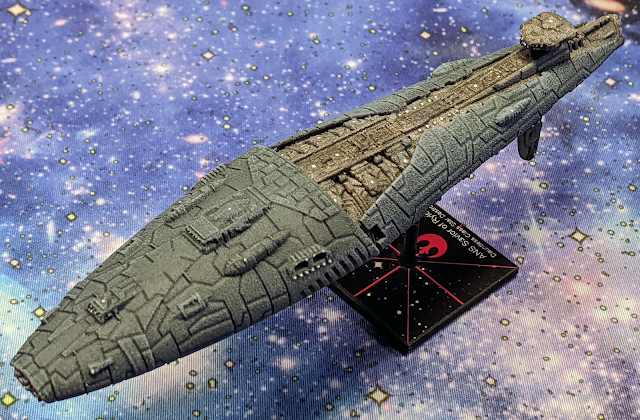 The ANS Savior of Ryloth adds some much needed heavy firepower to my Rebel fleet, intended to go toe to toe with my Imperial Star Destroyer. The Dauntless Class Star Destroyer is another forgotten ship remembered most from Star Wars: Rebellion, a game I played religiously in the '90s. I have always adored this ship, especially because it was a capital ship for the Rebels that wasn't a Mon Cal.

The Dauntless Class Star Destroyer is from Shapeways and can be found here. 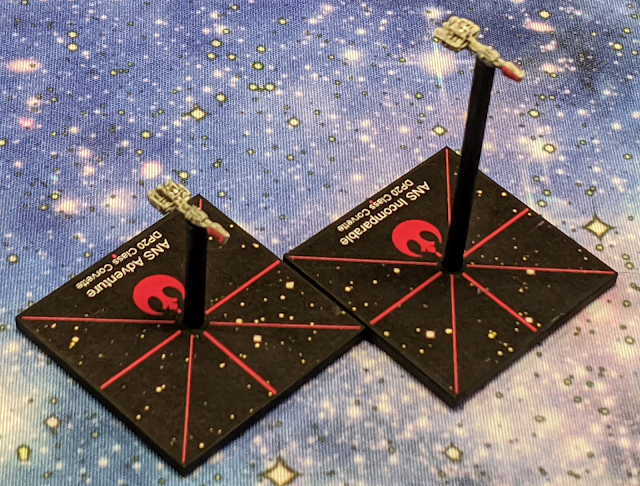 The ANS Adventure and Incomparable are probably the two most powerful light ships in my Rebel fleet. Having decided on getting some DP20 Class Corvettes for my Imperial fleet I couldn't not get some for my Rebels.

The DP20 Class Corvette is an Utar Ships model and can be found here. 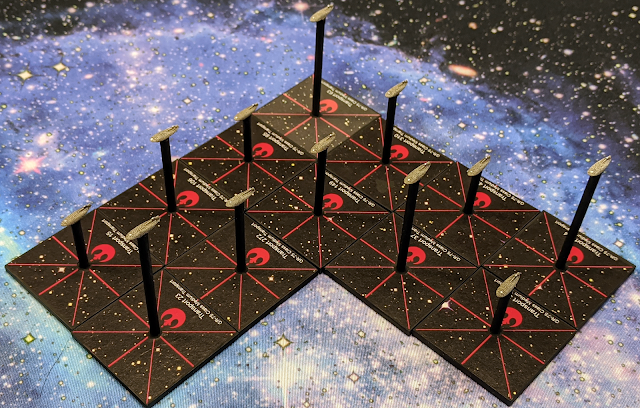 While my Imperials got their Star Galleons for heavy lift, I knew I needed the venerable GR-75 Class Medium Transport for my Rebels. These tiny transports are seen everywhere, including the battle of Endor for some reason.

The GR-75 Class Medium Transport is from Shapeways and can be found here. 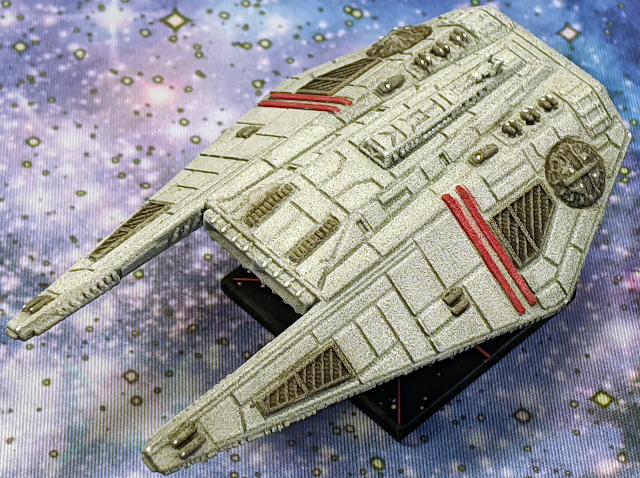 The ANS Smuggler is another heavy addition to my Rebel fleet. The Liberator Class Heavy Cruiser, like the Dauntless, is most remembered from Star Wars: Rebellion. Carrying a decent armament, her primary weapon is her hanger bay capable of embarking six squadrons of starfighters.

The Liberator Class Heavy Cruiser is from Shapeways and can be found here. 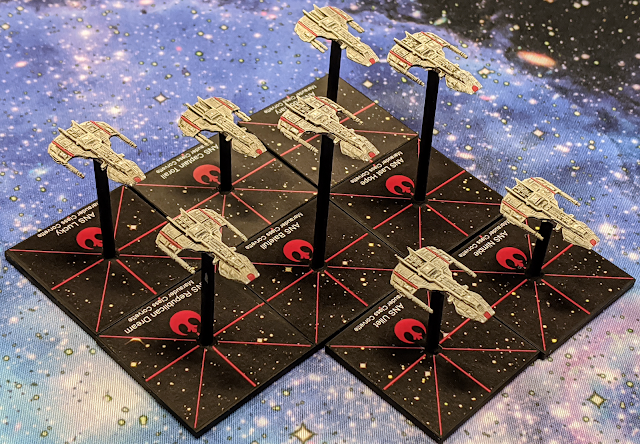 The ANS Ullet, Nimble, Last Hope, Baleful, Republican Dream, Lucky, Judiciary, and Captain Torall are a flexible option for my Rebel fleet in smaller games. The Marauder Class Corvette is unique in that size for carrying a single squadron of starfighters. I made sure that two of these eight ships are the missile launcher variety.

The Marauder Class Corvette is an Utar Ships model and can be found here. 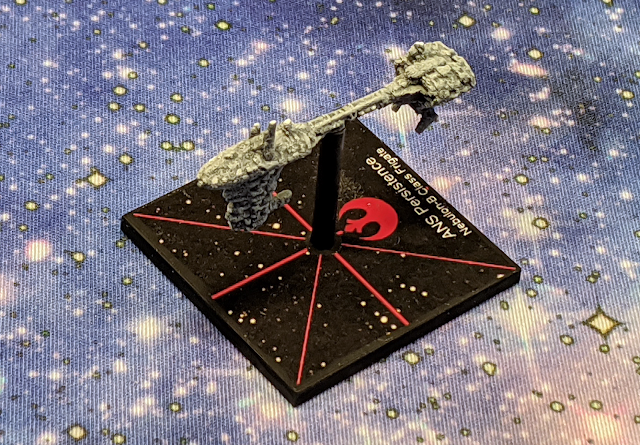 The ANS Persistence joins the Far Orbit in the fledgling frigate line of my Rebel Fleet. I already had one Nebulon-B Class Frigate for my Rebels but a second one is welcome.

The Nebulon-B Class Frigate is from Shapeways and can be found here. 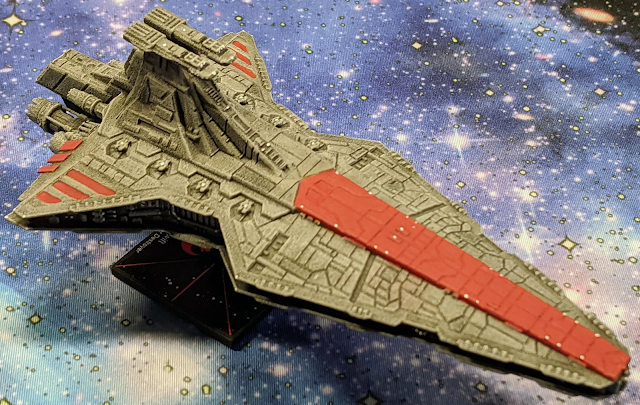 The ANS Swift brings considerable deck space to the Rebel Fleet. The Venator Class Star Destroyer is a Clone Wars era ship that was mostly mothballed in the early days of the Empire, perfect for scrounging Rebels. It also makes a convenient mobile base from which to launch starfighter attacks through hyperspace.

The Venator Class Star Destroyer is from Shapeways and can be found here.

This brings my Rebel fleet up to an impressive size, though not equal to my Imperial fleet. I seem to keep finding myself in the situation of having a larger Imperial than Rebel fleet no matter how many models I buy and paint. There must be an unconscious bias there. I have updated my gallery page for my Star Wars fleets; if you want to see detailed pictures of the entire fleet go here.

In addition to filling out the two opposing fleets I also purchased some civilian ships for scenarios. 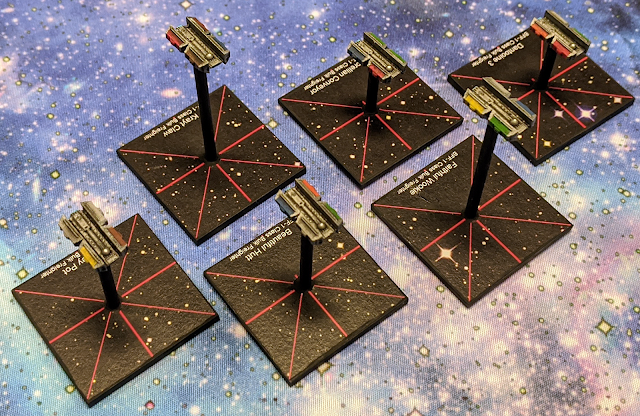 The Honey Pot, Dantooine 3, Beautiful Hutt, Faithful Wookie, Krayt Claw, and Corellian Conveyor are all BFF-1 Class Bulk Freighters. This ship, first seen in the X-Wing and TIE Fighter series games is common throughout the galaxy.

The BFF-1 Class Bulk Freighter is an Utar Ships model and can be found here. 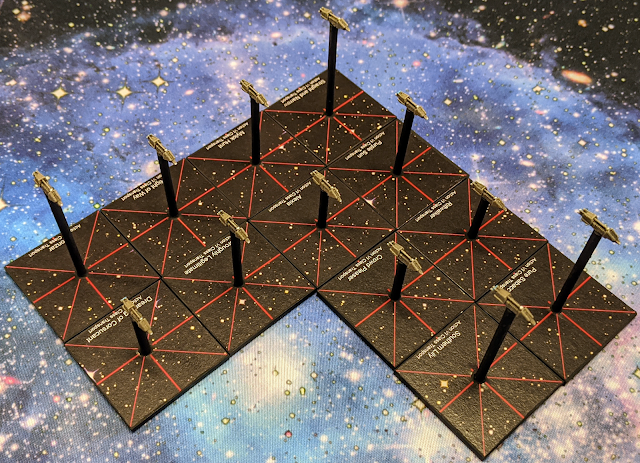 The Action VI Class Transport is from Shapeways and can be found here.

This was a lot of ships to complete but thankfully its done. Except its not because a few hours before writing this post I made another Star Wars order from Shapeways. Sigh.