Skip to main content
Labels
Posted by Man For All Seasons November 07, 2020

Good day all. This past week I managed to get together for a game, something ever harder to do in these interesting times we live in. I proposed to my friend Pat that we take my new 1/7000 BSG minis out for a spin and he was game (see my post on these awesome minis here). I gave Pat a choice as to what fleet he would use and being an avid Stargate fan he chose my Tau'ri. With these conditions in mind we made the fleet lists, set a date, and the game was on.

The fleets used were as follows: 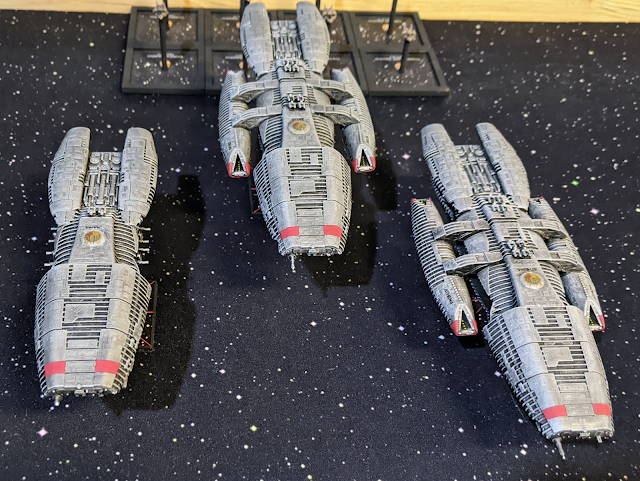 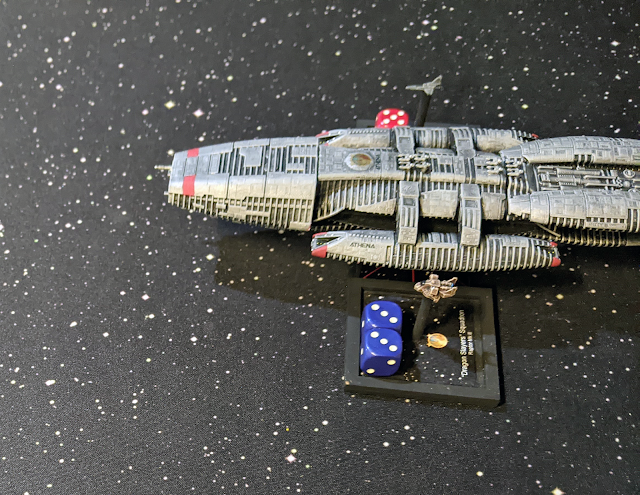 The Tau'ri deployed their four battlecruisers in the center of their deployment zone. Colonial Fleet deployed each of their two battlestars in opposite corners leaving the heavy cruiser in reserve a few light seconds away, ready to jump in at a moment's notice. Both sides accelerated cautiously and dumped fighters into the black.

The sedate maneuvering of the first moments of the battle were interrupted by the Tau'ri ships rapidly speeding across the intervening vacuum. Frankly, the Colonial commander was stunned at the acceleration of these corvette sized vessels. Not yet finished their launches, the battlestars loosed their ready Vipers and Raptors against the leading two BC-304s. Confident in their fighter superiority, the Colonials were content to disrupt the Tau'ri while they continued to launch. 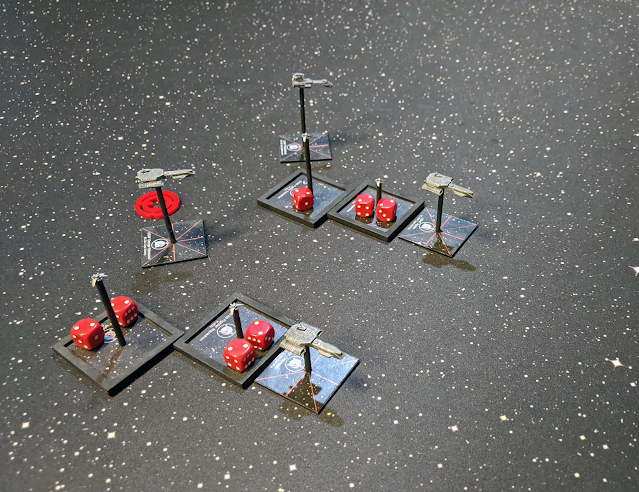 However, this confidence was quickly lost when the two strike missions were decimated. The Tau'ri had seven squadrons of F-302s in the air, a multitude of railgun batteries, and ships nearly as nimble as the Vipers. Plans would need reworking. Adding insult to injury, the Tau'ri battlecruisers let off a full salvo of their missiles targeted on the Athena to their front.
The Athena presumed she was safe being out of arc of the Asgard Plasma Beams and behind her flak wall. However, the full salvo of four Tau'ri ships is not to be taken lightly. 2/3rds of the incoming missiles fell to the dense flak field, the rest detonating on the battlestar's forward hull. These missiles were Mk VIII naquada enhanced nuclear missiles and the combined yield of the warheads hitting the Athena was in the region of 1.5 gigatons. The warhead that was teleported into the Athena's engineering section was almost an afterthought.
In a flash, two flight pods flew in opposite directions at high speed; the hull that connected them could not be found. 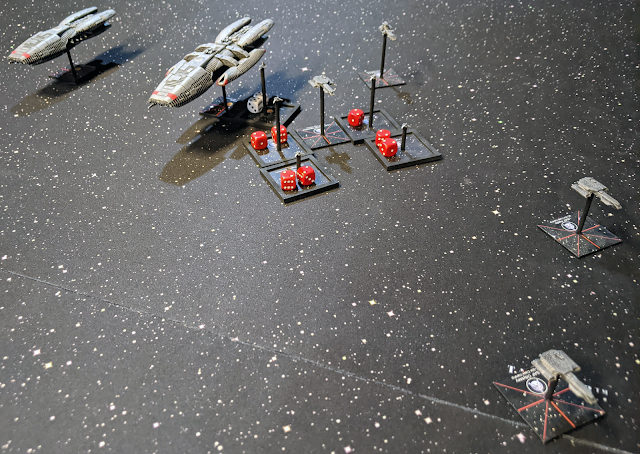 The rapid destruction of the Athena stunned the Colonials, but being professionals they got to working the problem. As the Tau'ri sailed past the radioactive debris of the once proud battlestar, two flashed appeared behind them. The Zeus utilized one of her jump drives to reposition herself aft of the General Hammond. The Diana was called in from reserve to assist and, though her jump wasn't as precise, she was still close enough to lend her fire. 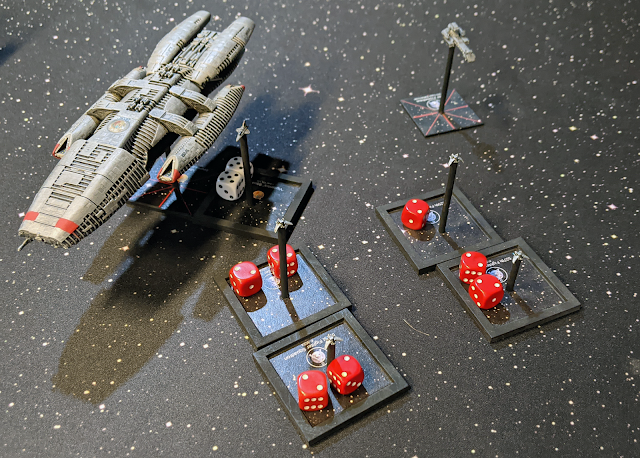 In a heartbeat the General Hammond, the Tau'ri flagship, found itself under the guns of two very large ships. A cloud of Colonial shells occluded the battlecruiser from her allies and in short order she was ripped apart. First the Colonials experienced shock, now it was the Tau'ri's turn. The only thing the Tau'ri were capable of doing in response was beaming more warheads over, attempts that ended in failure when one warhead materialized in a bulkhead and the other failed to lock on.

High on their momentary victory, the Colonials attempted to box in the tiny but deadly Tau'ri ships. However, the Tau'ri commander chose the better part of valor and sped away in the hopes of reloading their missile tubes. Maybe next time they could get their Asgard weapons onto target. 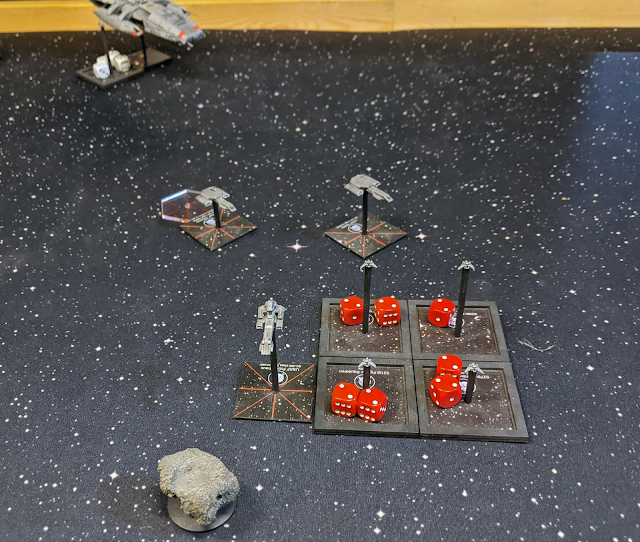 In short order, the Tau'ri ships had reloaded their missile tubes and came about for another run. The Colonials had other ideas. Attempting to replicate their previous success, the Zeus and Diana jumped behind the Earth ships and again pounded their selected target. When the Colonial salvos were finished, the Odyssey was held together with duct tape, three crewman, and faith. In response, the Tau'ri unleashed a diminished missile strike at the Zeus.
With her primary guns occupied dispensing hate at the nearest BC-304, the Zeus' Flak field was not as strong as it could have been. If she hadn't acted like a rabid dog with prey in its jaw she might have survived. Instead, a number of missiles made it into contact with the massive ship and released their miniature suns on her hull. Moments later she was a drifting hulk of glowing metal. Over the next minute, both fleets called it a day and left for home.

I would like to thank Pat for a surprising and enjoyable game. In the times we live in it is ever more important to cherish these moments of joy and frustration.

This scenario was played using Metaverse Second Edition, as of yet unreleased. The first edition can be found here.