Skip to main content
Labels
Posted by Man For All Seasons October 23, 2021

President Clarke's regime has antagonized its neighbors for the past 3 years with little consequences. Not as overt as the actions of the Centauri, Earth has still encroached on the borders of several league worlds and reneged several treaties. Most of these incursions have gone unanswered due the demands of the Shadow War. However, at the border of Hyach space, Clarke's cronies are about to finally be challenged.
Hello everyone, this past Saturday, Matt and I drew up plans to get some Babylon 5 models on the table. This was partly due to a desire by Matt to field his Hyach fleet which has not seen much use and as a response to the exciting news of a future B5 reboot/reimagine.
Text in italics is instructive rather than narrative and serves only to provide a glimpse at the underlying mechanics at work.
At the edge of Hyach space, several mining interests lay nestled within the confines of a Dark Nebula. Ever seeking to expand his influence, President Clarke has dispatched a task force to scout the area for future expansion. Unfortunately for these wannabe fascists, the Hyach Gerontocracy opposes this move and are attempting to frighten the young upstarts. 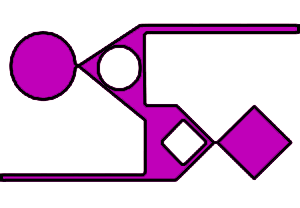 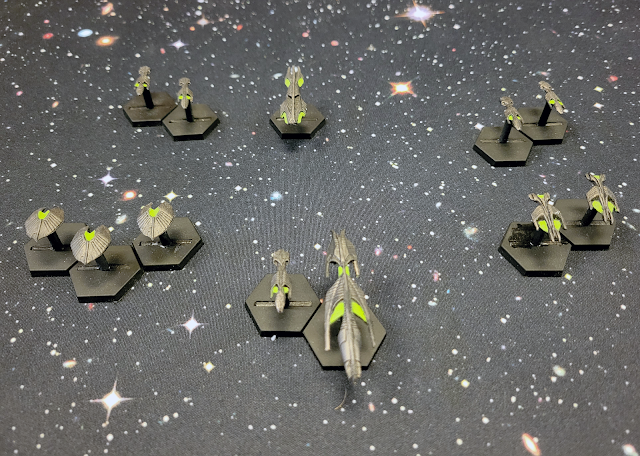 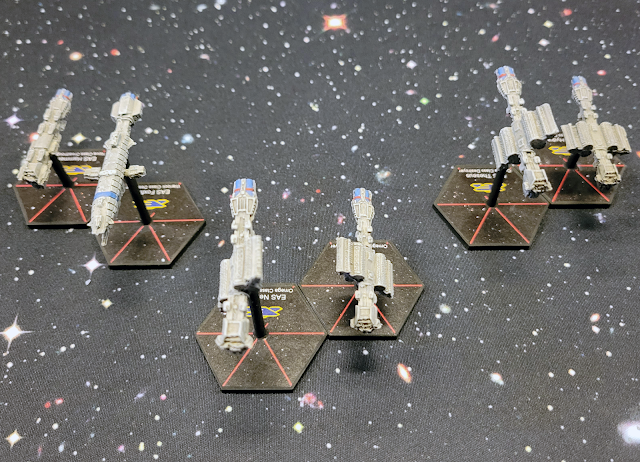 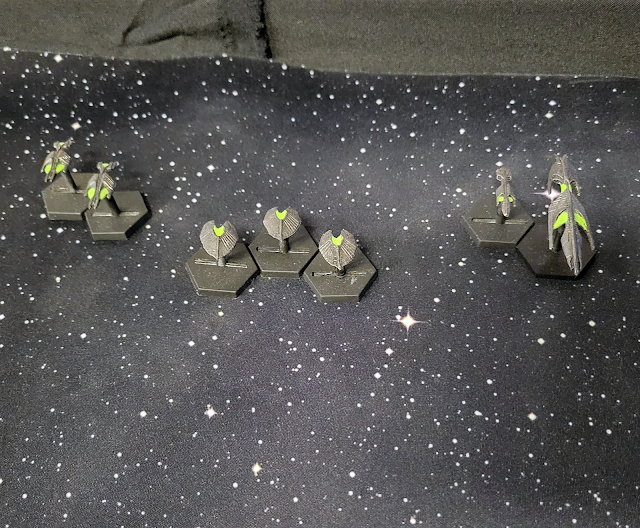 In their primary deployment zone, opposite Earthforce, the Hyach entered the battlespace with their Battlecruiser, Fast Frigate, three Stealth Cruisers, and two Light Cruisers. This represented the preponderance of the Hyach long range firepower. The three Stealth Cruisers were a particular problem as their advanced EW systems made targeting them with the primitive human sensors a near impossibility.
The Alichi Kav Class utilizes the Stealth System which provides a minus modifier to sensor rolls made against the starship. If the starship fired in the previous turn, the Stealth System is less effective. 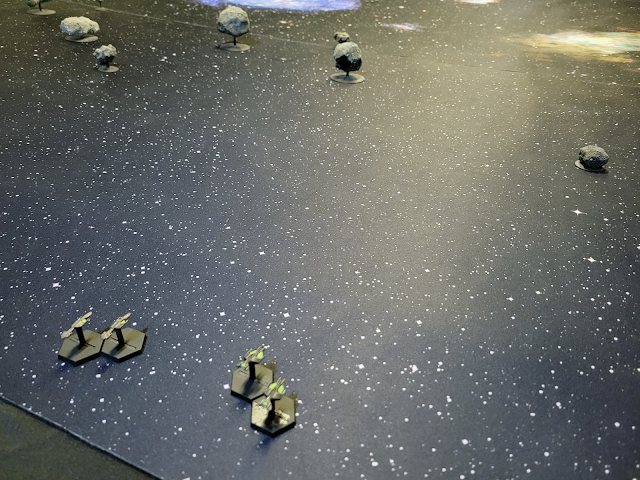 On the far flank the Hyach entered with their Scout Carrier, and four Fast Frigates. The asteroid field was a significant hindrance but not as much as the fleet composition itself. Only the Battlecruiser and the Scout Cruiser possessed Jump Drives, Quantium 40 behind rare and expensive even for the Hyach. This meant that the two portions of the fleet had to each have one of the Battlecruiser and Scout Carrier. This left the fleet split and vulnerable to Earthforce concentrating on one portion at a time.
For Babylon 5 scenarios we use a house rule for non-FTL ships (yes the author uses a house rule). Any ships without an FTL drive must be deployed within 20cm of a ship with an FTL drive. The scenario mandated that Matt deploy at least 25% but not more than 50% of his fleet's value in the flank zone. This meant that the two FTL capable ships would have to be split up. 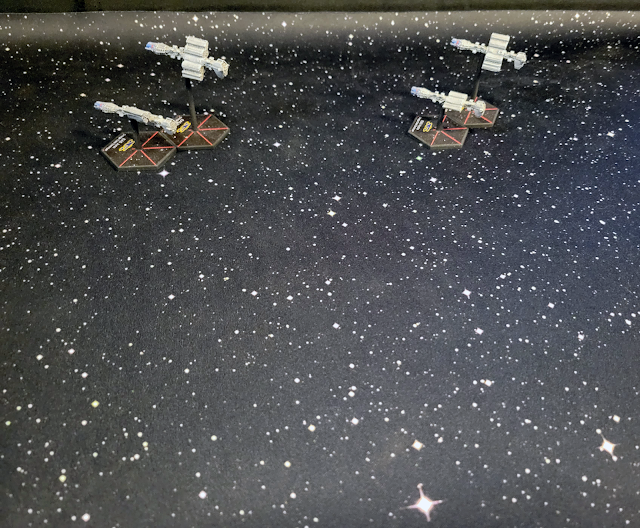 Earthforce was almost as restricted in their deployment. Four Omega Destroyers entered opposite the Hyach Battlecruiser. While significantly less advanced than their opponents, the Omega is still a big, tough ship that can take a pounding and was designed in response to a war against another alien race that preferred long range precision fire. The Achilles (the hull on which the more advanced Warlock was built) and her escorting Nova remained in hyperspace as a reserve. 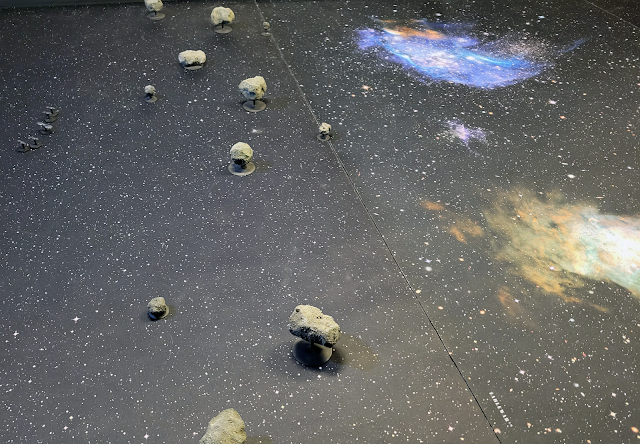 Through the dense dust clouds of the Nebula, the Hyach flanking force moved towards the asteroid field but dared not move too fast lest they be struck by a rock on their way by. Nearly two light seconds separated them from the main fight, too long even for the Hyach. 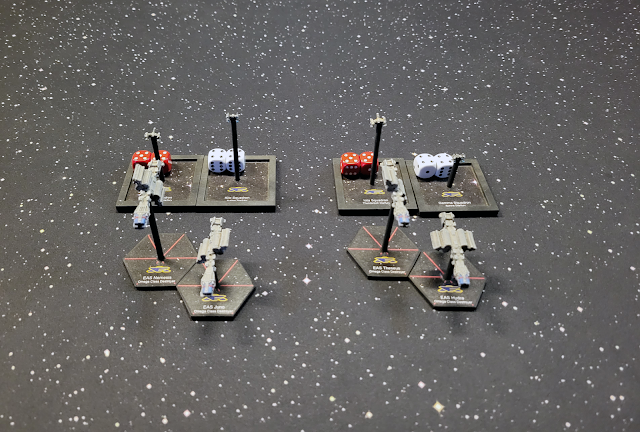 The four Omegas turned to face the Hyach, some 400,000km distant, and began releasing Thunderbolt and Aurora squadrons. 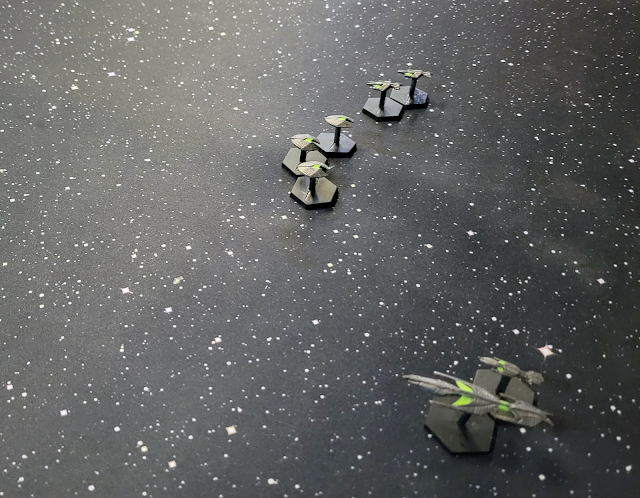 The main Hyach battleline accelerated at their maximum towards the lumbering Earth ships. Normally wishing to engage at long range, the confines of the nebula meant that even the vaunted Hyach lasers would have to close to be effective.
Speculative fire did cross the clouded gap between the lines. The Hyach Battlecruiser reached out and touched the front of the Earth flagship with her massive spinal laser pockmarking her armour, the Light Cruisers joining in. The Stealth Cruisers sailed silently waiting for the opportune moment to engage.
The four Earthforce destroyers targeted the Hyach Light Cruisers and caused light damage. The nebula interfered with the heavy laser cannons but the Hyach ships were much less armored, somewhat evening out the odds. 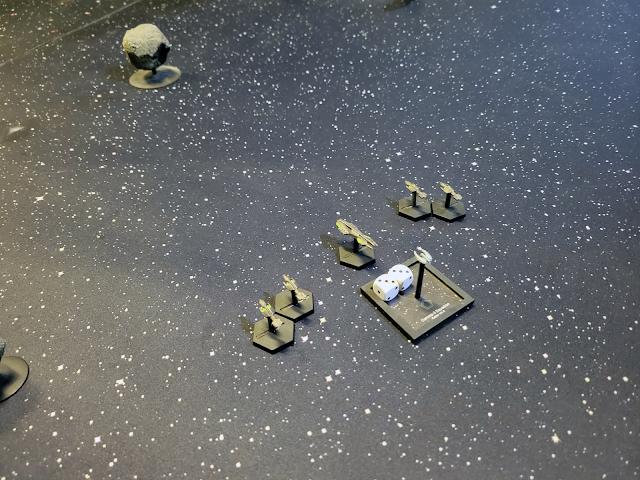 Far beyond the asteroid field the flanking force began loosing their starfighters but the range was too great to launch a mission.
Starfighters are designed with a range rather than a speed. Instead of moving the squadrons about the table like miniature starships, they are simply formed into a mission and placed at a target within their range. 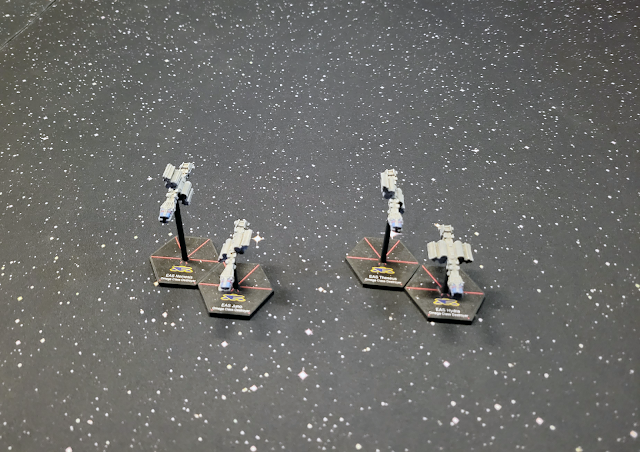 The Omegas began to decelerate in an attempt to keep the range open for the time being, releasing the rest of their air groups. In one massive wave, eight squadrons of Thunderbolts and eight squadrons of Auroras crossed the dusty space between the lines. 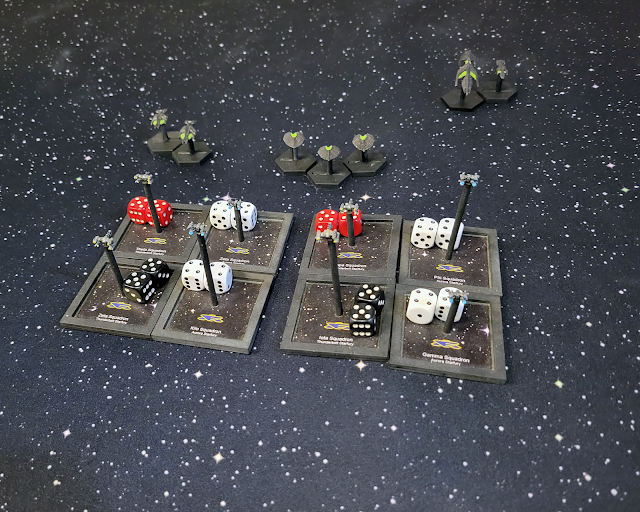 As the Hyach steadily moved towards the Earth line, it became readily apparent that the mass of Starfurys were vectoring for the Stealth Cruisers. The impressive EW systems of these ships had no effect on the Mk 1 Eyeball; a cloud of some of the best fighters the younger races could offer was the perfect solution.
The Stealth System the Hyach use provides a minus to sensor rolls. However, starfighters do not use sensor rolls, they simply move to the target and fire their weapons at point blank range. The Stealth System does not make the ship invisible, just difficult to lock on to at long range.
Seeing their doom approaching, the Stealth Cruisers opened fire on the Earth flagship, joined by the Light Cruisers. The Masers on the Light Cruisers set the bow of the Theseus alight followed by the Spinal Lasers on the Stealth Cruisers tearing holes hundreds of meters deep into the thick hull. In seconds the mighty Omega plowed through a burning cloud of its own escaping atmosphere and debris looking more like a malfunctioning steam locomotive than a starship.
In return, the Omegas focused once again on the Hyach Light Cruisers causing moderate damage and disabling numerous systems. 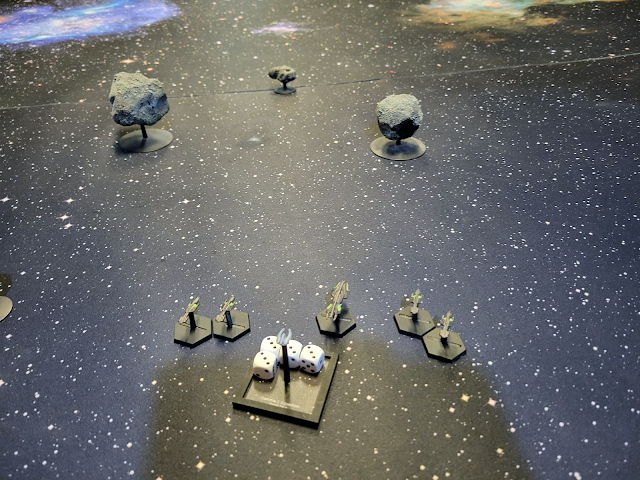 Just beginning to traverse the asteroid field, the Hyach flanking force watched the unfolding destruction from distance, unable to assist. As the Earth flagship cruised on like a mobile pyre, the situation seemed in hand until the hammer blow fell. 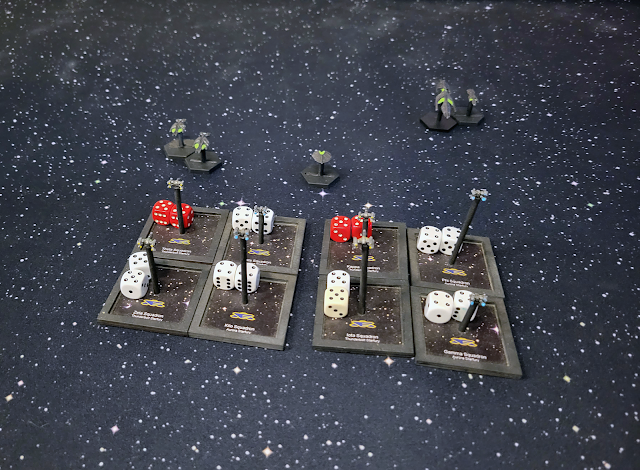 Surrounded by a laser light show better than any 80's stadium concert, 128 Starfuries descended on the three Hyach Stealth Cruisers. Two of the cruisers were gifted 120 Hammerhead nuclear missiles each and quickly evaporated in atomic fire. The remaining cruiser was pounced upon by a cloud of starfuries raining down pulsed plasma fire into her hull. Not immediately destroyed, the ship moved on disoriented and punch-drunk.
Even though starfighters can effectively ignore Stealth Systems, they must still contend with enemy defensive fire. Unfortunately, the Hyach Stealth Cruisers are woefully inadequate in this department. 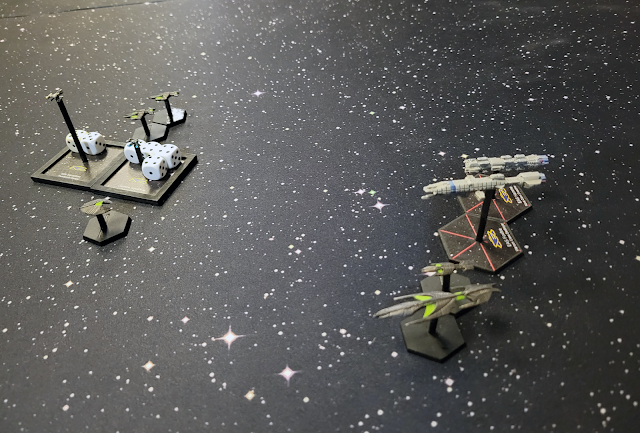 Determined to capitalize on the pain they had inflicted on the Earth flagship and avenge their fallen stealth cruisers, the Hyach battle line pushed to close the gap even further. As the Starfuries split, half returning to their motherships and half turning towards the Light Cruisers, a jump point opened. Spilling out of the golden vortex, the Achilles and Nova joined the fray in a near perfect position. Less than 30,000km to the starboard-stern of the Hyach flagship, two of Earth's most powerful mobile platforms readied to dispense violence.
Babylon 5 ships use the Dimensional Drive, an FTL drive that utilizes a secondary play area 1/10th the size of the table that corresponds exactly to the table (in my case a printed image of hyperspace on a whiteboard). Starships in the dimensional space move as normal within it but due to the compressed distances are essentially moving 10X speed. However, at no time can a player pre-measure distances between the two play areas making the eventual transition from one to the other a bit of guess work. 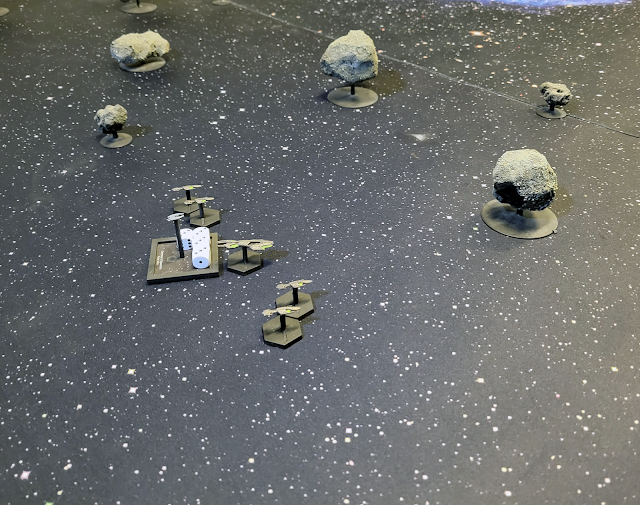 Still threading the needle, the Hyach flanking force could only watch as the battle was being lost just 2 light seconds away. 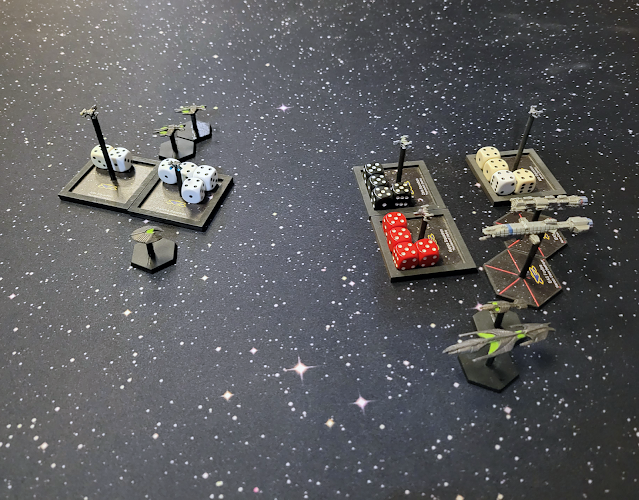 Even the great many years the Hyach commander had lived could not prevent the panic that set in. The Light Cruisers continued to pour fire into the Earth flagship, now just 150,000km distant and more plasma fire than warship. Masers and lasers turned more Earth metal to slag and yet the humans had learned their lesson against the Minbari. The Theseus plowed on through a fiery nebula of her own making.
The Battlecruiser and her escorting Fast Frigate fired their facing weapons into the Nova erupting her hull and setting off fuel lines and magazines. Her hull lit from her own internal fires, the Nova proved why she alone had won the Dilgar War and continued fighting.
In return, the line of Omegas fired their heavy lasers across the closing distance and again punished the Light Cruisers. The Achilles and Nova, both at nearly point blank range, eviscerated the Fast Frigate with heavy pulse cannons, particle beams, and a missile barrage. 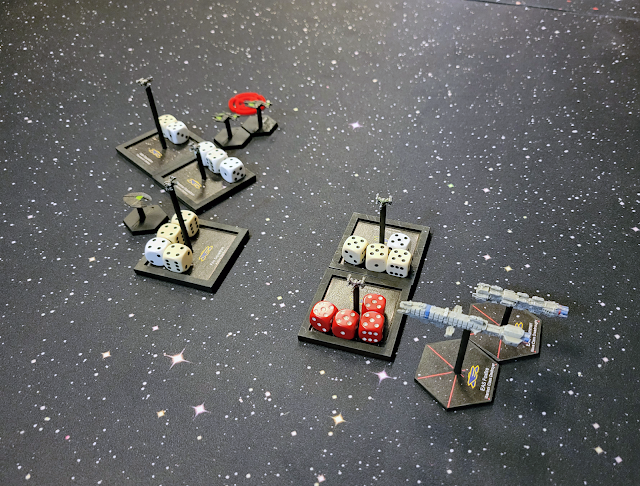 This created an opening that the Achilles' air group would ruthlessly exploit. 96 Thunderbolts descended on the Hyach flagship unleashing 240 Hammerhead nuclear missiles into her hull. Blinding flashes consumed the mighty battlecruiser leaving only stray atoms to join the nebula's dust. Starfuries from the Omega line added insults to this grievous injury and continued to damage and disable the Light Cruisers and the remaining Stealth Cruiser.
With the flagship destroyed, command of the Hyach fleet fell to the commander of the Scout Carrier still embroiled in a field of rocks. With little fanfare, the retreat was sounded and the flanking force withdrew. However, lacking jump drives, the damaged Hyach cruisers were surrounded by heavy Earth warships, some on fire as if spawned from the pits of hell itself. The crews promptly surrendered.
This game proved to be both entertaining and surprising. Had Matt and I had different rolls for scenario and terrain at the beginning or had Matt's composition included more jump capable ships, this game might have gone very differently. I admit that I was concerned about going up against the technological and ranged might of the Hyach with Earth, but in the right circumstances and with a very carefully planned hyperspace exit, Earthforce can bring the pain.
Thank you Matt for a most enjoyable game.
This game was played with Metaverse Second Edition found here.
Join us on Facebook here.
Email Post
Labels: Babylon 5 Metaverse Starships