Skip to main content
Posted by Man For All Seasons January 04, 2022

Happy New Year everyone and I hope all is well as you progress into 2022. For this New Year's Day I continued my tradition of running a starship 'Grinder' for any and all interested both in person and virtual. A 'Grinder' is an idea I shamelessly stole from Battletech.

The premise is a tournament where players begin in low level units, playing a free-for-all, earning victory points and progressing through higher tiers of units. Player's can even enter the game midway or leave partway if they choose (have new players enter at the average tier on the table), which makes it great for conventions (what are those again?). This premise is mostly rules agnostic and can be used with one fleet, universe, or many so feel free to steal the idea, just make sure to post pictures for the rest of us to see.

This Grinder will be played over a six hour period or ten turns of gameplay, whichever is reached first. At game's end, the player with the most victory points will be declared the winner. A player will earn a single victory point for each turn they play (at turn's end) whether their starship survives or not.

When a player's starship is destroyed, they will re-roll for a new starship in their current tier at the end of the turn. A player may spend one victory point at the end of the turn to remove their starship from the table and re-roll for a new one in their current tier as if their starship was destroyed or advance to a higher tier and re-roll by spending a number of victory points equal to the new tier (i.e. four victory points to advance to tier four). At the beginning of the next turn, the player's starship is placed at one of the random starting positions and they may begin the game with a momentum from 0-20.

Eight starting positions are placed around the table equidistant from the center and from each other. Newly spawned starships will enter the table at one of these starting points.

The collection of starships available to the players is divided into ten tiers. Each of these tiers covers a point range with the range of each subsequent tier being 150% the range of the previous (i.e. tier one = 1-100pts, tier two = 101-250pts).

Each tier is subdivided by universe. When a player is rolling for a new starship in a tier they can choose the specific universe they wish to play with. Alternatively, a player can choose all, in which case their starship could be from any of the available universes but they are granted one re-roll but must accept the second roll. Players will not be informed as to the starships available to them in the various tiers but will know which universes are available in each.

Instead of the normal mechanics for plotting of movement and firing, an initiative card deck is utilized. The deck is composed of one card per player with their name on it. At the beginning of a turn the deck is shuffled and dealt out. The indicated order of players is used for the remainder of the turn.

Players will not plot their movement orders each turn, only keeping track of their momentum. During the movement phase, the players will proceed, according to the order of the initiative deck, performing a legal move with their starship and updating their momentum.

Players will not fire their starships simultaneously; rather they will fire their starships in the order of the initiative deck with all damage and criticals being dealt immediately. This ensures no confusion as to the responsible party for a starships destruction. Both starfighter combat and boarding combat will be adjudicated in the same manner.

At the center of the table is an unknown and powerful anomaly. At the end of the turn, the player who's starship is closest to the anomaly can either choose a single tactic (that they have access to for the remainder of the game) or to replenish all lost starfighters, starfighter ordinance, and any one-shot weapons or systems on their starship. 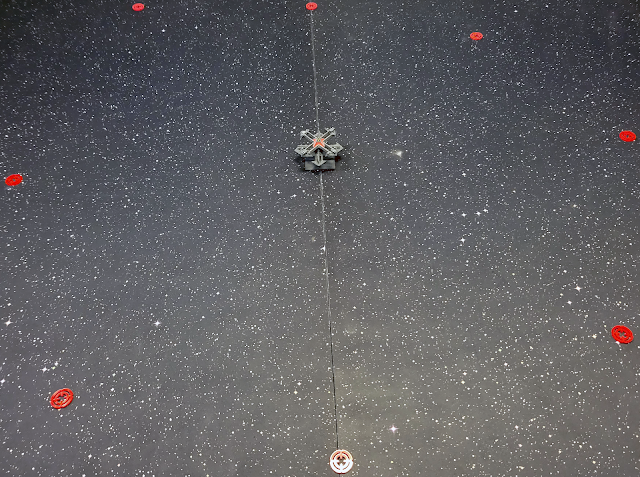 The 2022 New Years Grinder was played using Metaverse Second Edition, but by removing any rules specific to Metaverse (such as tactics) this should be adaptable to any rule set. The starships in these ten tiers were pulled from my collection with a few from my friend Addison's and was limited to the models we have completed. I have linked each starship class with their Metaverse Second Edition designs in my account. 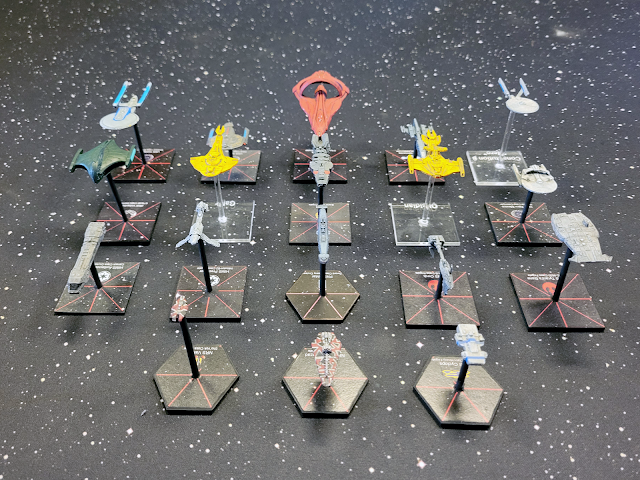 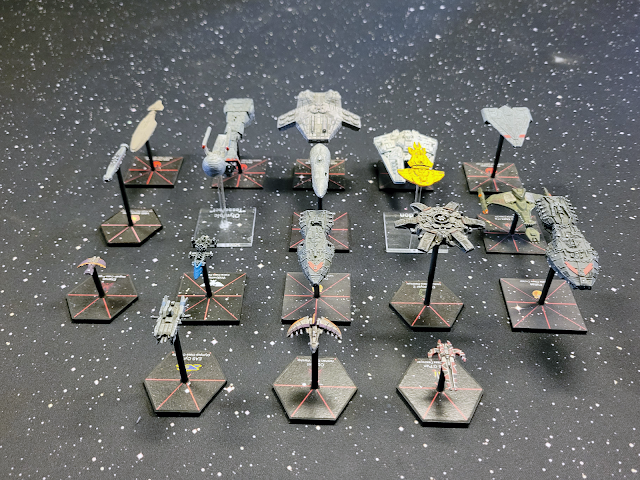 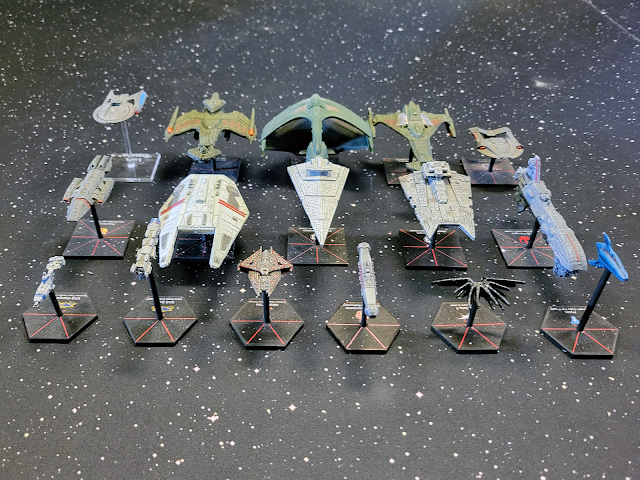 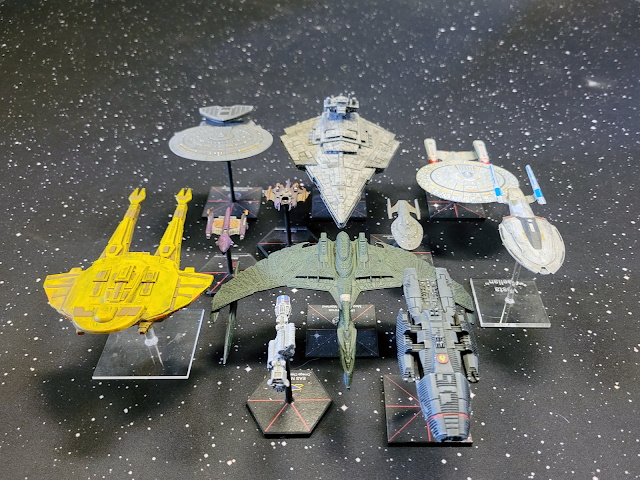 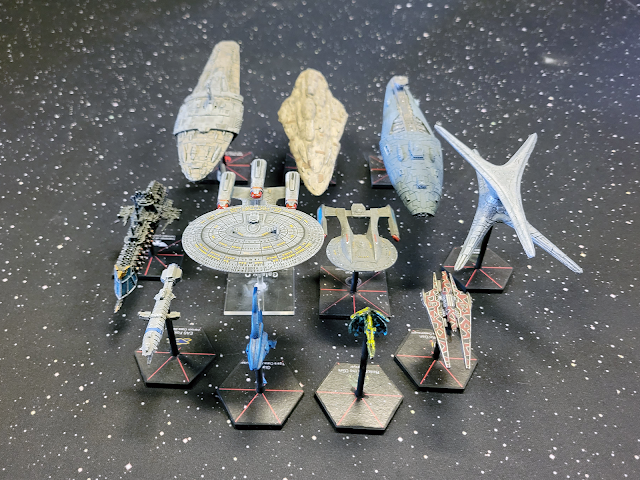 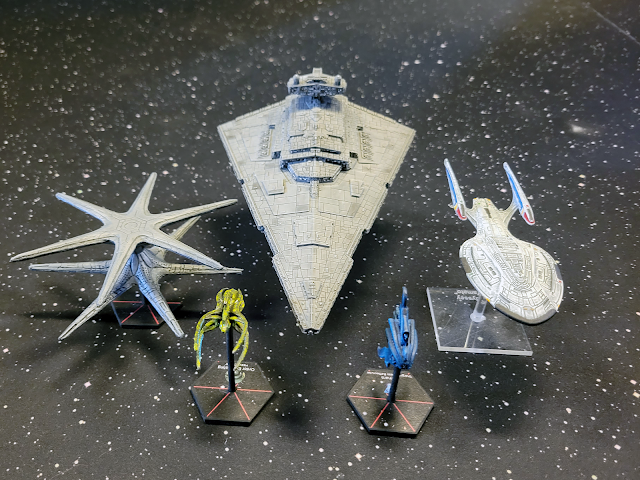 For the Grinder I had five players and three observers. The gameplay was not as narrative as my usual scenario style gaming, not being conducive to my usual writing format. Instead I have focused on a few of the highlights. 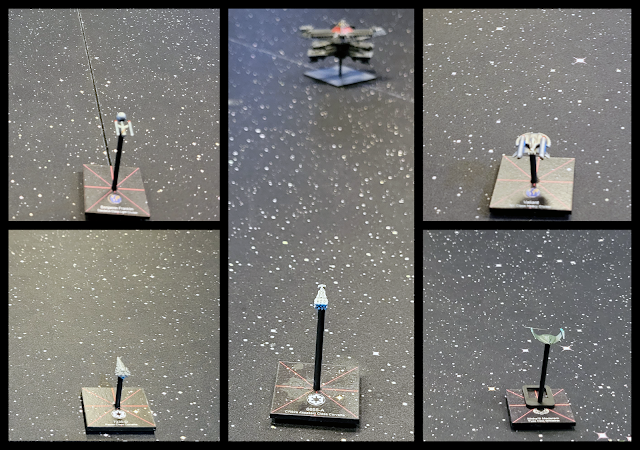 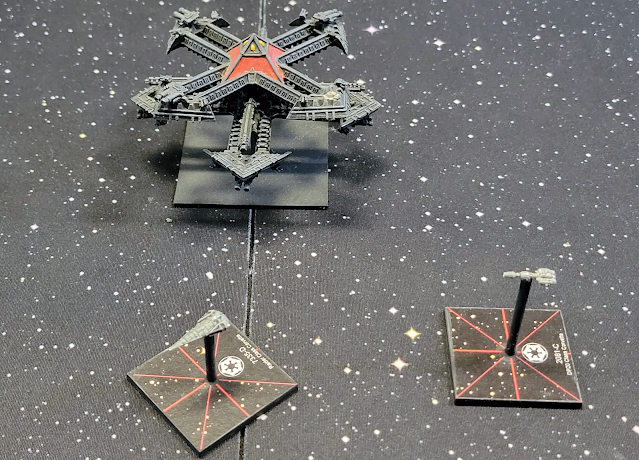 A tier one Raider Class Corvette is pummeled by a tier two DP20 Class Corvette, both vying for the coveted 'closest player to the anomaly' position. 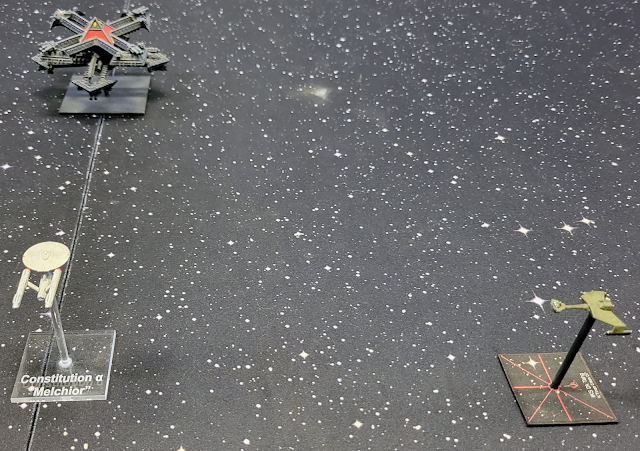 The tier two K'Tinga Class Battlecruiser did not even hesitate to turn directly towards and engage its nemesis, a tier two Constitution Class Heavy Cruiser, as they both entered the table. 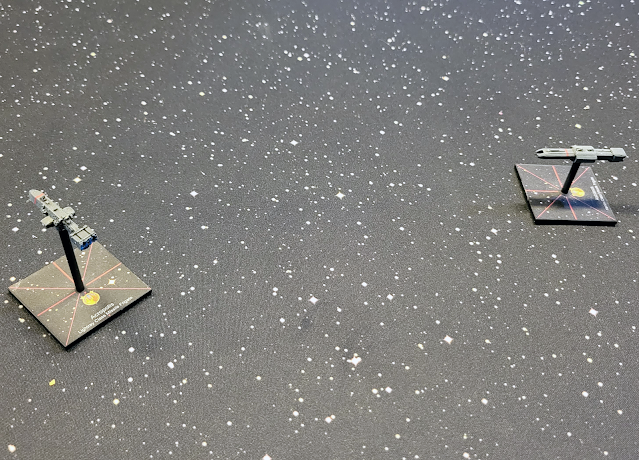 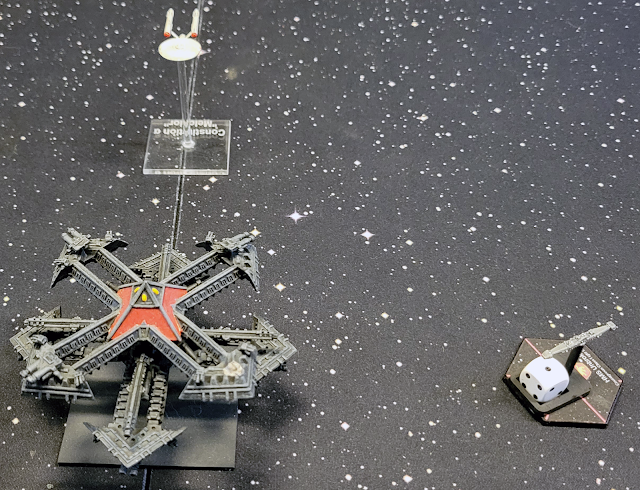 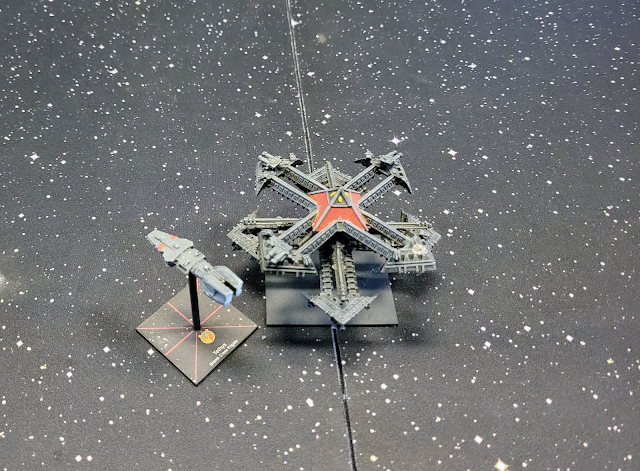 To the amusement of all, a tier three Brenik Class Frigate orbits the anomaly continuously reloading her nukes, firing at a target, missing that target, and then reloading again. Over and over again. 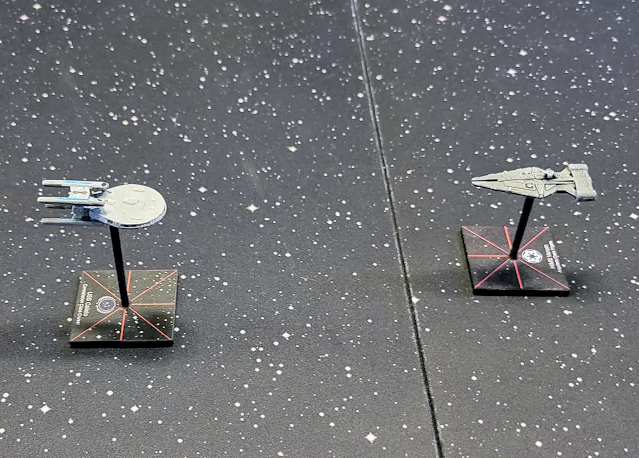 A tier two Constellation Class Cruiser and a tier two Arquitens Class Corvette head straight for each other, phasers and turbolasers lighting the vacuum, leaving both vessels crippled. 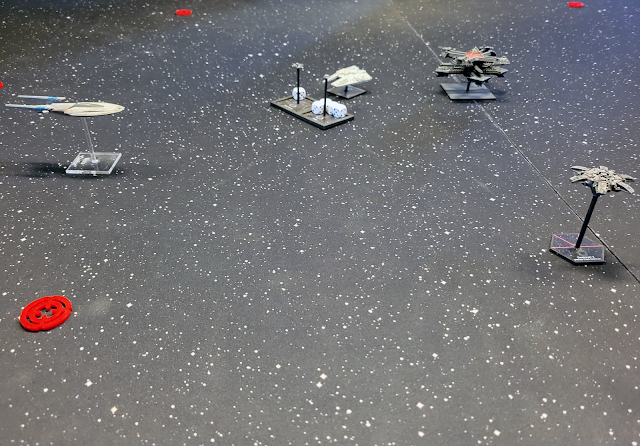 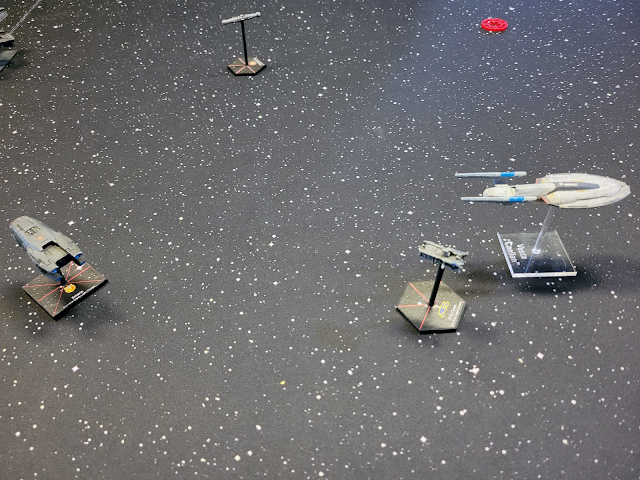 Having earned the attention of everyone present with its shuttles, the tier seven Vesta Class Explorer is set upon by a tier four Olympus Class Corvette, a tier five Olympia Class Light Cruiser, and a tier four Star Knight Class Heavy Cruiser who bring the rear shields down and shear off the nacelles. From the other side of the table, a tier seven Primus Class Battlecruiser pierces the Vesta with its battle lasers and sets off a warp core breach. 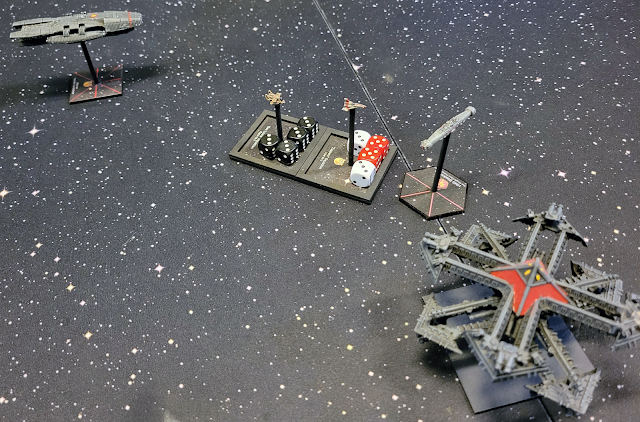 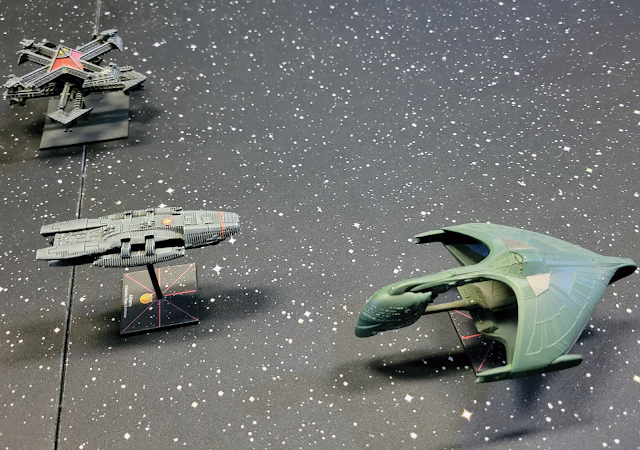 A tier six D'Deridex Class Warbird closes with a tier seven Columbia Class Battlestar intent to push her face in with plasma torpedoes, but it is not to be. Blind but thick gun fire from the battlestar almost entirely misses, save for one battery which hits the cloaked and unshielded warbird, disabling her forward torpedo tubes.
This silly game lasted for the full six hours. More than a dozen starships were destroyed with two players advancing to tier seven. However, the winner in the end was Addison in the tier four Star Knight Class Heavy Cruiser from Honorverse, one point more than Will in the tier seven Columbia Class Battlestar. Having the highest tier starship does not guarantee victory, having the most victory points does. This is an annual tradition but I may start to roll it out at conventions when they are a thing again. If you try running a Grinder yourself, let me know how it goes and post pictures!
The 2022 Grinder was played using Metaverse Second Edition.
Join us on Facebook.
Email Post