Skip to main content
Labels
Posted by Man For All Seasons March 11, 2010

Well my time as of late has been spent on administrative work surrounding the Wargames Club. Phil, Daniel and I have gotten a lot of work done on the club room over the last couple of months. Our biggest success seems to be the activities and interaction of the membership. One aspect of this improvement is the newly introduced Open Gaming Wednesdays. Every Wednesday the clubroom is open for any member to stroll in and play a game. Last night was the second Wednesday we had held and turned out to be a great success. A rousing game of munchkin was played, Star Munchkin version, followed by a few rounds of Bang!. It only took us a few minutes to see the possibilities of this game of sherriffs and outlaws as a drinking game. In the end everyone seemed to have a great time which speaks well for the future of the club. 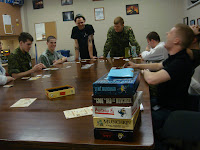