Skip to main content
Labels
Posted by Man For All Seasons March 01, 2010

Well I just got back from spring break, an opportunity to get in some skiing and some drinking, and to celebrate Phil and I played a game of 6mm WWII on Saturday night. The game saw a counter attack by German forces in the first month after Normandy. The German force consisted of a company of panzergrenadiers, a company of recce, and a heavy tank company (read: 3 tigers). This force was required to push an American force out of a small town divided by a river and bridge. The American force defending the town consisted of 3 platoons of infantry, 1 platoon of M18 hellcats and a number of support stands. The Americans also had 2 batteries of Mortars on call and the occasional incoming airstrike. 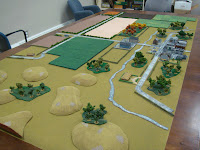 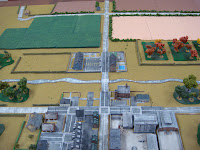 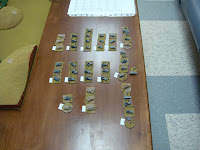 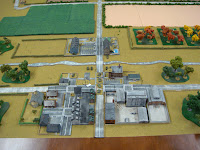 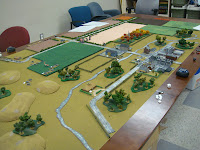 The first turn saw two pushes by the Germans, one on the American left towards a defended chateau, and another towards the orchards near the front of the town. 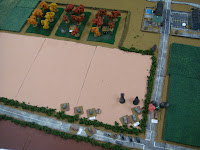 The German recce units were given an early blow by an American infantry platoon in the orchards. 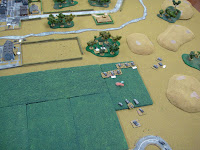 The panzergrenadiers saw more success against the American left thanks to the support of some Stugs. 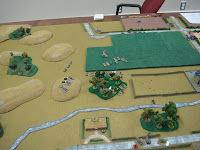 The second turn saw the American infantry falling back from their forward positions along with a vicious gun duel between the Stugs and the Hellcats, however, the hellcats Green quality would prove to be fatal. 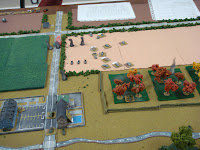 After the initial shock the Recce made headway on the American right in the second turn. 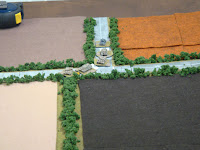 The second turn also saw the arrival of the Tigers. 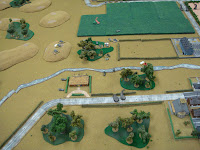 By the end of the third turn the American left had folded with one German platoon across the river and others soon to follow. 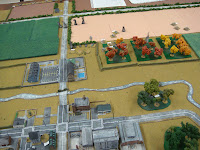 The third turn also saw the Recce push their opponents across the bridge simultaneous with an airstrike that damaged a platoon of armoured cars. 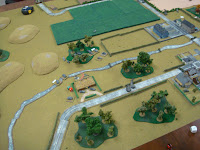 The American left was completely in German hands by the fourth turn. 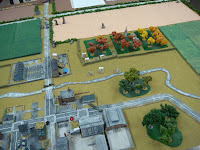 At the same time the situation at the town was quickly becoming apparent. 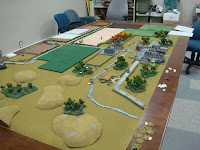 At the end of the fourth turn the American player threw in the towel. As it stood the Germans had crossed the river on the left and were in a cross river gun duel in the center. While the tigers had never fired a shot, their slow but steady advance towards the front line was also a motivator. As always the game was enjoyable regardless of outcome. This game also made it apparent for both Phil and I that we really enjoy this set of rules and that I should get around to posting them.
Email Post
Labels: 6mm WWII