Skip to main content
Labels
Posted by Man For All Seasons September 19, 2011

I put on a game for the club this weekend and in typical style it was large... really large. The game was a test of my new rule set I am developing called "Contest of Colonels", a battalion level game for the era of mechanization. Expect more on these rules as I polish them up in the next few weeks.

The scenario took place in September, 1985 with a cold war gone hot theme. A Warsaw Pact category B infantry division (Czechs) had achieved a breakthrough, routing a German forward unit. The remnants of the Czech division were ordered to continue forward and establish a bridge head across a canal some 3km further in. Following the Czechs was a Category A Guard Tank division intending to exploit the breakthrough. 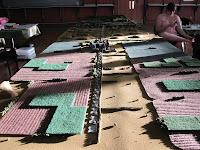 The Czech battalions stretched out towards the bridge, infantry leading.
Responding to this breakthrough were two different BAR units; a squadron from a recce regiment and an armoured regiment. The recce squadron was first on the scene with the armour some 2 km behind. 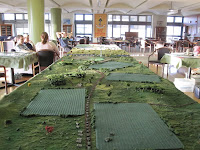 The British armour races to the recce all the way at the bridge.
The battle began as a Czech infantry battalion advanced towards the only bridge across the canal (though they could ford with their APCs). The recce squadron, not normally intended for this kind of work, quickly took positions and opened fire with what little weaponry they had across the canal. In short order the expert British gunners had begun to rack up a toll of BTRs using the 30mm autocannons and 76mm cannons on their few Scimitars and Scorpions. The three Striker AT missile vehicles managed only a couple kills (including an unknowing T-62) before being silenced by long range fire. 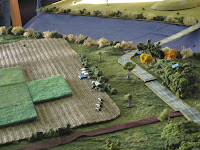 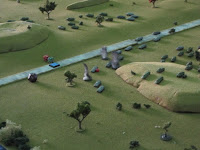 Accurate fire from the British light tanks begins to whittle down the horde of APCs.
Within a couple minutes (game terms not playing time) the Czechs had reached the bank and the bridge and even had some vehicles in the water. The recce had taken a beating, being only a few hundred meters from an entire infantry battalion, and retreated into wood lines not far behind them. Within minutes an artillery strike hit their positions and the recce was ruined as a fighting force. However all was not lost as the damage had already been done on the Czech battalion and it began to retreat en mass just as its objective was within reach. 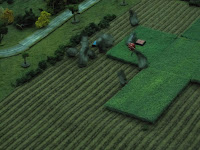 What remained of the recce squadron (burning wrecks), their sacrifice would end up to be key to British victory. 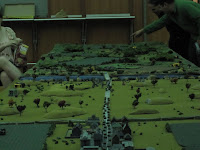 The T-72 battalion advances to cross the canal as their infantry brethren retreat past them.
During this prelude the British armoured regiment had been racing towards the canal at best possible speed. Simultaneously A Czech armoured battalion of T-72s had been filling in the gap left by the infantry battalion. Behind this stretched out over a few kilometers of highway were two Soviet tank battalions of T-80s. The British needed to get into position and open fire on this long column of tanks and APCs before it had time to deploy and cross the bridge. 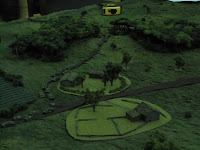 The British armour races to get into position in time.
At the last moment the first British squadron achieved this requirement and begun popping T-72s at less than 1500 meters. Within seconds the Czech tanks were in disarray with burning hulks all around them from the infantry and their own companies. As the first of the Soviet tank battalions rolled through the village 1km from the canal they emerged into a sea of chaos with burning Czech vehicles all the way to the bridge and a rag tag group of retreating men and vehicles. Across the canal sat nearly half of the British's Challangers in positions ready for long range fire on any advancing unit. At this point the Soviets decided that this was not the point in the line where a breakthrough was to occur and halted their advance. 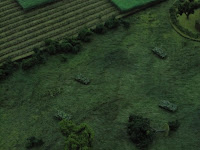 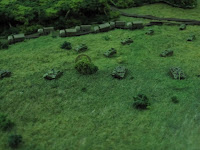 Now in position they begin to do what British tankers do best, long range gunnery. 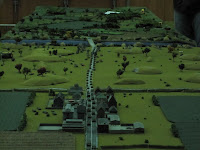 The Czech column advances right into the death zone. 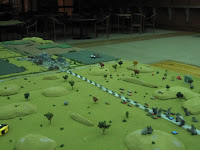 The Soviet units see the death raining down upon the Czechs and decide that today is not a good day to die for socialism.
This game saw a large smattering of different people playing, observing, criticizing, ogling, and commenting, pretty much the normality for a game like this. A few minor issues came up with the rules that I am correcting prior to our next game. I will be running two games at Council Fires in two weeks so expect battle reports on those.
Other Cool Pics: 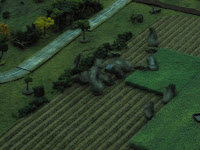 Challangers take up positions next to the burning recce vehicles. 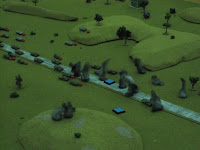 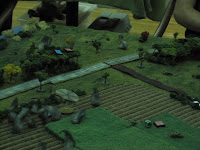 A Hind makes a run at a troop of Challengers and bags one. 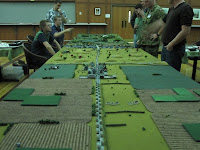 The many kilometers of Soviet vehicles. 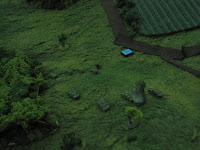