Skip to main content
Labels
Posted by Man For All Seasons September 26, 2011

You Sunk My Battleship

I organized a game for my group at the mess this Saturday. We played a game of my new starship battles rule set called Metaverse. This scenario was based in the dominion war and saw a Federation/Klingon task force take on a large Dominion/Cardassian force centered on a Dominion battleship. 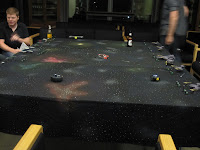 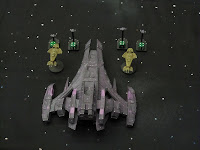 The Dominion Battleship and its escorts. 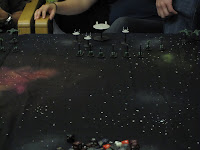 USS Venture and its squadron. 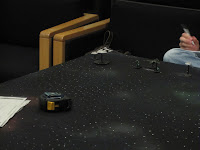 USS Thunderchild prior to her fiery grave.
The two sides faced off against one another with the Klingons beginning cloaked. The two sides began their advance at flank speed. This would prove to be a mistake on the part of the Federation as the Dominion entered weapons range with the Klingons still under cloak. This left only one target. The Federation forces represented only 1/3 of the combat potential of the fleet and were therefore outgunned. One of the primary targets for the Dominion was the USS Thunderchild (Akira class) as they did not want here releasing a torpedo salvo on the battleship. The Thunderchild took a hefty beating during the first segment of the game and managed to perform miserably in her return fire. In short order her starboard shields were penetrated by the phased polaron beams of a squadron of Attack Ships which then pierced through the saucer section of the ship and left her dead in space. The USS Malinche (Excelsior class) followed her larger cousin in less than a minute. 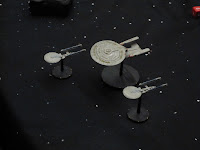 The USS Malinche has already been eliminated from this squadron. 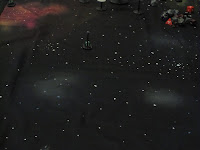 The Federation Attack Fighter wing was destroyed before making it into close range.
At this point the two other Federation squadrons centered on the USS Venture (Galaxy class) and the USS Rutledge (New Orleans class) decided to try their hand at the Picard maneuver. Unfortunately they miscalculated their jumps. The USS Venture (Galaxy class), Crockett and Potempkin (Excelsior class) jumped nearly 150,000 km behind the Dominion lines leaving them at longer weapons range firing out their rear arcs. Doubly unfortunate for this squadron the Dominion had predicted this move and turned a squadron of Attack Ships 180 degrees. This group of pesky little ships tore through the aft shields of the Venture and eventually penetrated them and skewered the port warp nacelle leaving the big Galaxy class starship trailing drive plasma. The USS Rutledge's (New Orleans class) squadron also jumped behind the Dominion lines but within 30,000 km of the aft of a Dominion Battlecruiser and two Galor class ships. This firing was much more equal as the Dominion and Cardassian ships are not as well equipped to fire aft as the Federation designs. 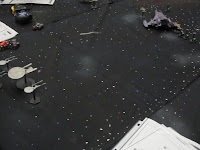 The USS Venture and her squadron having not lived up to Picard's maneuver. 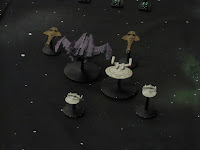 The USS Rutledge in a close quarters battle after her tactical warp jump.
At this moment the Klingons decided to join the fray and decloaked. This classic maneuver had its historical effect and gave the Klingon squadron a moment of surprise. Most of the Imperial fleet engaged the Dominion at medium range and seriously hurt their shields. One squadron, however, displayed the virtues of Kahless and decloaked and fired at the Dominion Battleship at less then 80,000 km. The IKS Maht'Ha and Qu'Vat (Vorcha class) unleashed a torrent of torpedoes and disrupters which took down the massive ship's starboard shields and utterly wrecked its starboard nacelle even bleeding some damage to the core of the ship.

The next turn of the game saw the scenario decided. The damaged USS Venture (Galaxy class) made the Dominion pay for its damage to her nacelle by bringing her powerful forward dorsal and ventral phaser arrays to bear and tore a hole in a Battlecruiser in just a few salvos of fire. The IKS Drovna and Yavang (Vorcha class) each claimed a Dominion Battlecruiser they had been pecking at. Finally, sealing the deal for the Alpha Quadrant Alliance were the IKS Maht'Ha and Qu'Vat (Vorcha class) who closed to within 30,000 km of the wounded Battleship and continued to fire. The Battleship had lost all its starboard thrusters to the earlier barrage by these ships and thus could not turn effectively nor roll to present the port side. The point blank fire from these two Klingon beasts proved too much even for such a massive ship as it was consumed by plasma fire in magazine breachs and internal buckling. All that remained after the destruction of the Dominion command ship was mopping up the remaining Attack Ships. 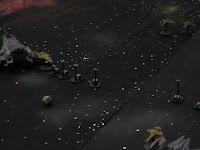 The Klingons finally decloak and join the battle.
The game was entertaining both in scope (by god that's a big ship) and in the tense moments that occurred such as the Battleship suffering a horrible critical check roll and being consumed by internal plasma fires. And the one lesson that was learned by all is that when used correctly Klingons are a very dangerous foe.
Email Post
Labels: Metaverse Star Trek Starships