Skip to main content
Labels
Posted by Man For All Seasons December 10, 2017

Hello everyone, This past Saturday at the request of my friend Pat I planned out a BSG scenario using Metaverse and invited a lively group of people over to play it with us. What I had intended as a lore accurate and tactically complex game devolved quickly into a cacophony of explosions, laughter, and highly improbable rolling. The brief the players were given was as follows:


As the Cylons launched their campaign of extermination upon the Twelve Colonies of Kobol, the Mercury Class Battlestar Helios was in orbit of Aerilon preparing for some much needed shore leave. As her fellow vessels drifted helplessly unable to defend themselves, the Helios remained in fighting condition due to a bug in her CNP program. Unwilling to just abandon the colony she orbited, the Helios fought the incoming Basestars with tenacity but a lone Battlestar was not sufficient to fend of the machine horde and she was forced to retreat.

Still bearing the scars of that battle, in the first few days, Helios gathered around her a motley collection of survivors of the attack, civilians and military alike. In a bold move five days after the fall, she and her fleet staged a daring raid on the mothball yards around Troy seizing a first war Heavy Cruiser and Destroyer. Placing prize crews on these two ancient vessels the Helios' fleet jumped out to the outlying systems to plan their next move. Unfortunately the prize crews found no ammo for the missile launchers or the point defense systems but at least they had main gun ammo.

The Helios and her fleet are currently in orbit of a Gas Giant sucking up much needed Hydrogen and Helium for their proposed escape from local space when they detect jump signatures. 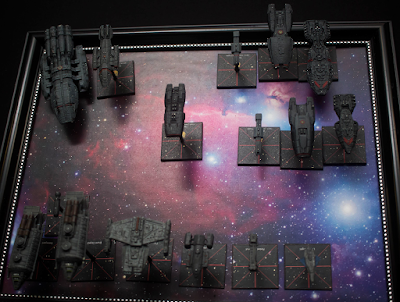 For this game the Colonial players would have the following at their disposal:

The prize vessels they captured were:

They also had the following civilian vessels under their protection: 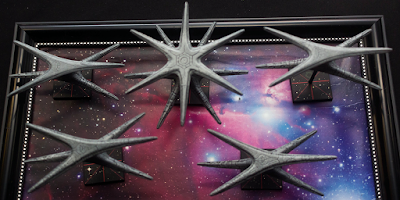 The Cylons would attack this motley force with the following:


The first decision to be made in the game was by the Cylons, they had to choose whether to launch a recce flight with Raiders in order to determine the location of the Colonial forces. Doing so would force the Colonials to deploy their forces before the Cylons but would give them a 2 turn head start on charging their FTL drives. The Cylon players chose not to launch a recce flight forcing them to record their intended deployments on a map before the Colonials put a miniature on the table. The Colonials only objective was to get the fleet out. They would lose more points for the loss of civilian ships and were told to be wary of the expenditure of missile ordinance as it was scarce. 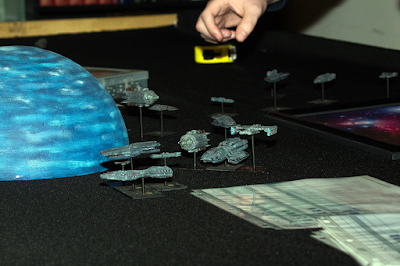 With the Cylons having recorded their deployments the Colonials set about setting up their fleet. Their deployment rules restricted them to some form of an orbit of the planet. The humming and hawing that this entailed went on for the better part of 30 minutes while the Cylons looked on amused at the indecisive nature of the weak fleshbags. 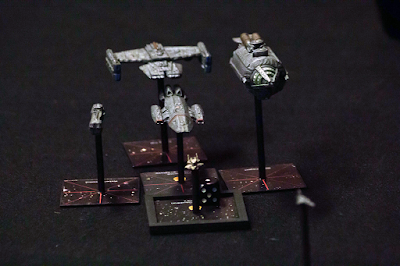 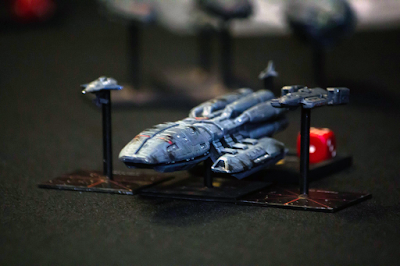 The Helios (Mercury Class Battlestar) escorted the Themis (Harrow Class Missile Frigate), Feature Creep, and Lucy's Light. Feature Creep was the only civilian ship that sported any weapons along with other noticeable modifications. When asked where these weapons came from the Captain was dismissive, though the serial numbers on the turrets matched those of a decommissioned First War Battlestar. 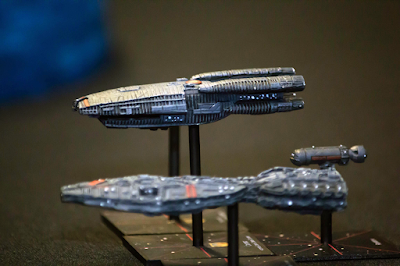 With the fleet deployed and a CAP established, the Cylons entered the table. Surrounding the Gas Giant the Cylons had ensured that there was no safe vector for sublight escape although this meant their line was thin.

Unfortunately, the Cylon deployment placed their Warstar within medium range of the Colonials guns; not a safe place to be. 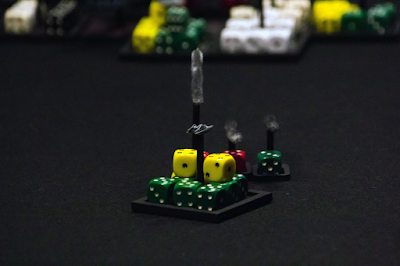 Within moments of emergence from FTL, with machine like efficiency, Raiders, Heavy Raiders, Conventional Ship to Ship Missiles, and Nukes poured out of the Cylon ships like locusts.

Seemingly unafraid of the torrent of lead that was soon to come her way, the Warstar sent forth her massive compliment of Raiders to strike at the heart of the Colonial fleet. Along with them came a wave of missiles. The target of these missiles was not immediately apparent but considering the genocidal mindset of the Cylons it was a good bet they were targeted at civilians. 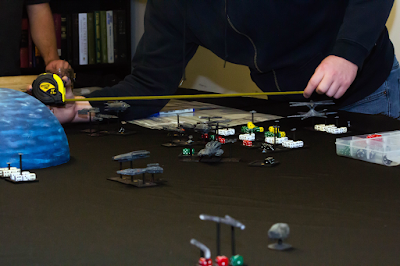 As the Raiders and missiles were crossing the void the Colonial gunners tracked the massive Cylon ship. In short order a veritable hurricane of high explosive shells began impacting the Cylon hull. Batteries from both Battlestars and their escorts strove to remove this threat before it could do too much damage. However, the Helios (Mercury Class Battlestar) was facing away from the Warstar leaving only her aft guns to engage. Her forward guns, including her bow heavies, were perfectly aligned with a Basestar opposite her. At extreme range her fire control computer estimated a less than 5% hit rate but the Commander decided that this was not the day for conserving ammo. Firing off her main batteries and her heavies she hoped and prayed for a miracle. Everyone present paused as the miracle came true. Achieving a hit rate that would have been exceptional at medium range, the Helios landed shell after shell that tore the Basestar asunder eventually tearing her in half.

Thinking that the display of gunnery from the Helios (Mercury Class Battlestar) was nothing but a fluke the Cylons were dismayed when the Warstar followed suit splitting into many separate pieces. Cylon ships are not made to stand in the gun line. 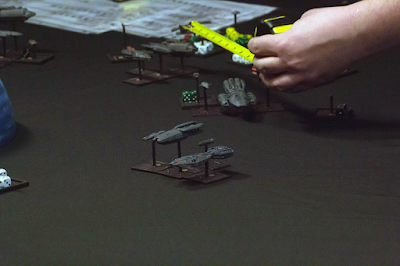 For a time the Cylons were annoyed, saddened, and shocked at the loss of greater than 40% of their fighting power, quite un-machine like! However, all was about to change. As the Warstar's remnants drifted apart, Raiders and Vipers closed the distance to each other, and Colonial gun crews tracked to new targets, the Warstar's missiles found a target. A full wave of conventional and nuclear ship to ship missiles descended on the SS Inelegant Solution (Heavy Tylium Carrier) like a pack of wolves. The flak wall put out by the escorting ships whittled the missiles down but not in their entirety. No nukes made it through but  several shaped charge warheads from the conventional missiles struck the lightly armoured civilian tanker. Deep chasms were opened into the heavy ship releasing Tylium into the surrounding space. One lucky missile (with the roll of the game) ignited the Tylium.

Similar to a fuel-air bomb the explosion that occurred was apocalyptic. The Tylium Carrier was atomized in nano seconds. The Solaria (Olympia Class Light Cruiser) and Ophiuchus (Luna Class Destroyer) were less than a kilometer to the left and right of the carrier and followed suit quickly. The explosion propagated outwards in all directions losing force as it went but still eating more and more. All the Raiders and Heavy Raiders from the Warstar were annihilated as well as the Vipers and Raptors sent to engage them. As the explosion continued it disassembled every single civilian ship and both missile frigates and more Raiders closing from the Basestars. 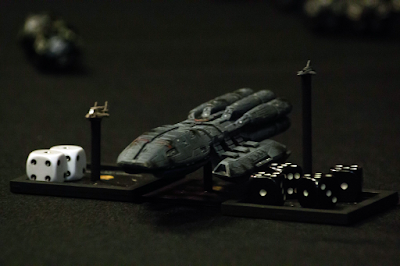 When the interstellar dust settled the Colonial survivors consisted of the Helios (Mercury Class Battlestar), her drive section a cloud of debris; 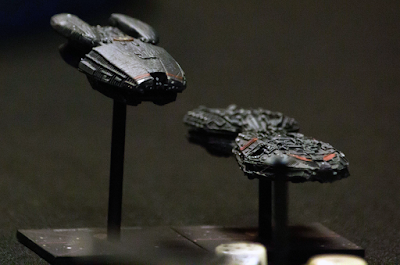 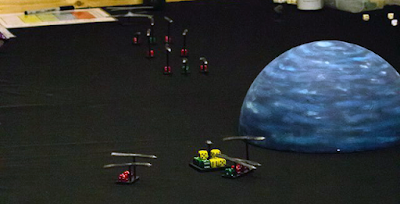 At this point the Colonials had essentially lost but they could not just run. The military vessels had been holding off charging their FTL drives as the civilian vessels drives were much slower to charge. With that no longer a problem they began a crash charge to try and escape with what they had left. The Cylons, like piranhas to chum, sensed the desperation and did not let up. The remaining three Basestars continued to launch missiles and Raiders. 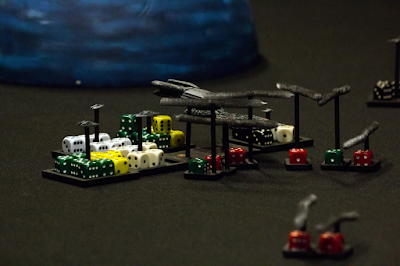 The Carnac (Admiral Canis Class Cruiser) and Rhea (Nemesis Class Heavy Cruiser) were further forward in orbit of the planet than the Battlestar. That meant that they were first to be intercepted by the Cylon fury. Two dozen squadrons of Raiders, some loaded with nukes, and eight squadrons of Heavy Raiders loaded with Centurions descended on the ships, with ship to ship missiles joining the fray as a cherry on top. Not content with just blowing up the Colonial ships, the Cylons wanted to board and execute their crews personally. (seriously what is their deal?). 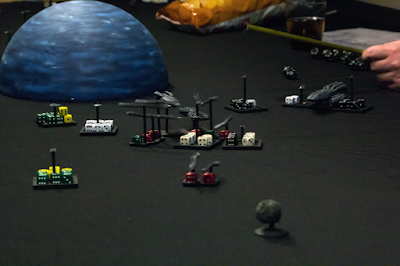 The Helios (Mercury Class Battlestar) did what she could to assist her sister ships but the distance between them limited the effectiveness of her Flak Wall. It was here that the Colonial players were painfully reminded that the Rhea (Nemesis Class Heavy Cruiser) had no ammo for her Flak guns. 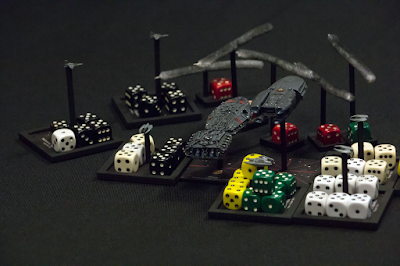 The two Colonial cruisers were in dire straits. Though the Battlestar's Vipers did manage to shoot down a number of missiles along with the Cruiser's Flak guns, there was simply too much Cylon ordinance. Wave after wave of nukes from the Raiders impacted the Carnac (Admiral Canis Class Cruiser) even as Heavy Raiders deposited Centurions aboard. Before the Centurions could even make headway against the defending crew, the weight of fire on the cruiser simply broke her apart. The Cylon players displayed no remorse for the loss of their boarding parties.

To the left of the Carnac, the Rhea (Nemesis Class Heavy Cruiser) received a total of twenty conventional ship to ship missiles (all the incoming nukes having been shot down). Had she been a Battlestar, fewer missiles would have made it through and the damage would not be quite as bad. Being a 45 year old heavy cruiser with no ammunition for her point defense, the Rhea didn't stand a chance. The hulk of the ship would forever drift along her last vector. 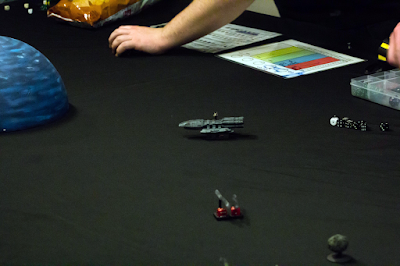 Surveying the battlespace, the Colonial players decided that there was little point in continuing the battle with a damaged Battlestar, missing half her air wing, having fired almost half her missiles, and missing her primary sublight drives. We called it a night and went and had ribs that were slow-cooking throughout the entire game.

I would like to thank Will, Pat, Lia, and Peter for a mind blowing game of many booms! It was great fun.