Skip to main content
Labels
Posted by Man For All Seasons December 03, 2017

Many Klingons, One Hallway

Hello everyone, this past Saturday I invited a number of friends over for a game of Metaverse and as always was not disappointed in the result. For this game I elected to utilize Adam's recently completed Klingon fleet in all its glory. Facing it would be a smattering of Starfleet ships, but this would not be a straight up battle. The scenario that faced the players was a little unique.

It is mid 2373 and the Federation-Klingon War over the Archanis sector has reached its sixth month. Always in search of new plunder and glory, elements of the fleet of House Duras have enacted a brilliant plan to capture one of Starfleet's new Sovereign Class vessels. Unbeknownst to the USS Independance, when it arrived at Starbase 23 for resupply a Klingon computer virus, laying dormant in the Starbase's computers, infected the ship. The Independance now lies helpless with all but life support offline. As the crew of the mighty ship race to purge their systems and bring the ship back online a Duras fleet has arrived with the intention of capturing it. Fortunately for the Independence, a distress call did make it out and reinforcements have arrived to foil the Klingon's plans.

Arriving to defend the USS Independence were the following:

To capture the Independence the Klingons arrived with the following:

With the deployments complete the Klingons began moving their B'Rels towards the Independence while the Vorchas and K'Tingas aimed to sweep around the planet. The Negh'Var slowly lumbered towards the USS Ulysses (Galaxy Class) with the K'Vorts guarding its flank. 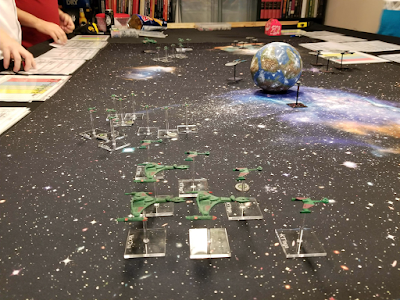 Unwilling to directly confront the Klingon cruiser force, the USS Kali (Akira Class), Herbert (New Orleans Class), and Dakota (Cheyenne Class) moved to support the Ulysses' group. Throughout this posturing the Klingons remained cloaked and while a few torpedoes were sent in the direction Starfleet thought the Klingons were, none connected. Silently the four runabouts docked with the Independence and unloaded the Starfleet Marines.

Suddenly, 15 B'Rel Class Birds of Prey decloaked without raising their shields, broadcasting their intentions. In quick succession the transporter operators of these little ships began beaming over boarding parties to the defenseless USS Independence. Of the 15 boarding parties that left Klingon ships, 5 arrived in the stern of the ship while 6 arrived in the saucer section. The remaining 4 were beamed into space or into bulkheads. The Starfleet players were overheard complaining about having to clean up that mess. Of the two beachheads, the Klingons in the saucer section were put down in short order for minimal losses but the landing in the rear of the ship was successful.

Seeing their smaller cousins gaining all the glory, the cruiser group pressed to full impulse to try and close the distance. 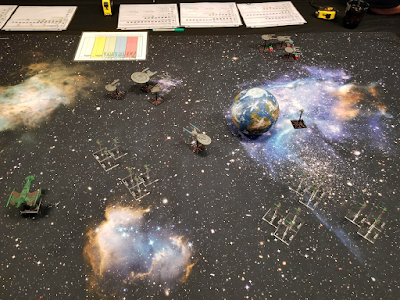 While disruptors and phasers were fired down corridors, outside the ship the action became tense. On the Negh'Var's left flank the three K'Vorts fired on and destroyed the USS Sixx (Saber Class) and the USS Armstrong (Intrepid Class). In response they suffered a storm of fire from the USS Hurricane (Defiant Class) and the USS Kodiak (Steamrunner Class). This tussle would leave the three Klingon ships in dire straights. Meanwhile the Negh'Var decloaked and began engaging the USS Mjolnir (Norway Class) and the USS Iberia (Challenger Class). Surprisingly these much smaller ships weathered  the battleship's fire in one piece. 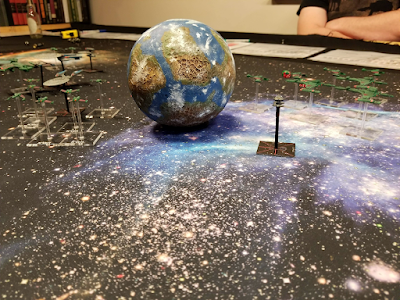 At the same time the three Vorchas opened fire on the USS Kali (Akira Class) bringing down her port shields and crushing her hull until only debris remained. The Starfleet players did not appear pleased at this point of the game but began their return fire. The USS Ulysses (Galaxy Class) and her escorts began to pour phasers and torpedoes into the Negh'Var straining her shields but not breaking her. Then the USS Herbert (New Orleans Class) and the USS Dakota (Cheyenne Class) fired an alpha strike torpedo volley that achieved a 100% hit rate. When the light of the explosions was clear, where the long neck of the Negh'Var used to be there was only wreckage, but the remnants of the ship limped on. 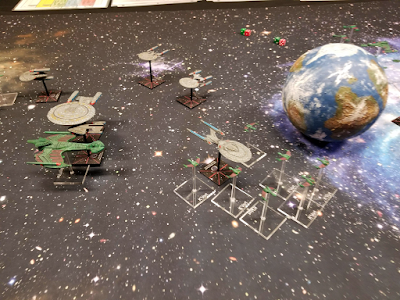 Sensing that the end was near the Negh'Var turned her nose towards the Independence. With here forward shield generators obliterated she no longer needed to worry about lowering her shields to use the transporters. Moments before another volley of torpedoes impacted into the battleship, her transporters deposited another 8 boarding parties onto the Independence. Within moments all that remained of the ship and crew were the boarding parties and a cloud of debris. The knowledge of their ship's destruction served to drive these remaining attackers into a frenzy. They charged down hallways, Bat'Leths at the ready, war cries echoing off the bulkheads. Disruptors, phasers. Bat'Leths, Mek'Leths, and rifle butts were exchanged and when the smoke cleared the Klingon boarders were dead or captured.

With the news of their failure to capture the Starfleet ship the remaining Klingon ships warped out of the system. In just a few minutes of combat, better than two battalions of Klingons were transported towards the USS Independence, half of whom never made it onto the ship. The remainder fought and clawed their way halfway through the ship before being put down. The battle may have been lost but many warriors are singing in Sto'Vo'Kor this night!

Thanks to Adam, Patrick, Gislain, Will, and Lia for a great game. I always prefer to lose an entertaining game than win a boring one, Kapla!