Skip to main content
Labels
Posted by Man For All Seasons February 13, 2018

Good day everyone, this past weekend my Father, of muchadoaboutnothing, was up for a couple days of gaming and company. We ended up playing three games over the weekend, the first of which I forgot to take pictures during (of course). However, I did remember to pull out the camera for the second and third games. Our first game was a Napoleonic game in the peninsula using Sharpe Practice by Too Fat Lardies. We both enjoy this system immensely as it both rewards historical practices (as TFL games usually do) and creates a noticeable narrative as you play.

For the game we went through the standard procedures of determining which force to use and what reinforcements we would have. I chose the British and my Father chose the French.

For my British force I selected a light infantry force comprised of the following:

With the reinforcement points I had available my options were wide open (I was attacking a French held objective). I could have purchased more Light Companies, more Rifles, Artillery, or other sundry units. I instead chose to enhance my command abilities by upgrading my Lvl III officer to a Lvl IV, and purchasing 4 more Lvl I officers for the Light Companies. This would allow me (at least I hoped) to remove more shock from my units and have more chips in the bag for leader activation.

For his French force my Father selected a Voltigeurs force comprised of the following:

The reinforcement points given to the French were a little less than mine but his options were still fairly open. Added to this force was a Light Artillery Gun and Crew, an upgrade of the Commanding Officer to Lvl IV, and a small field work presumably for the gun.

With this complete we were ready to go. In this scenario I was required to seize an objective from the French. In this case:

A bridge nestled inside a sleepy Spanish village. 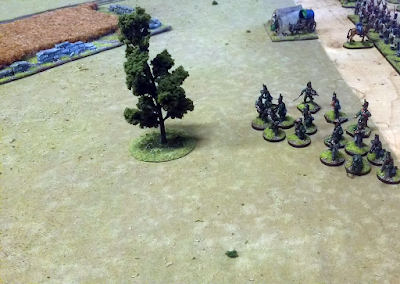 The first moves went to the British who deployed their Rifle Companies in the middle of the open field intending to utilize their range advantage.

The next moves went to the French who first deployed their Light Gun at the base of the bridge behind the field work.

They then deployed their Dragoon Squadron in a manner threatening British moves on the right flank. 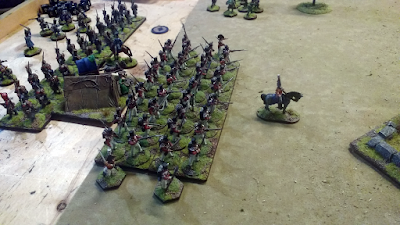 In response the British brought on all four Light Companies as a formation to counter the Dragoons (easier said then done). 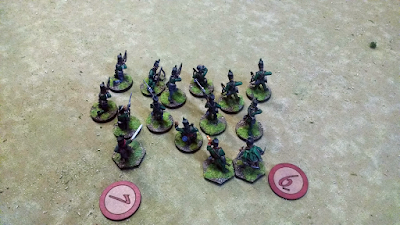 As the first turns progressed the Rifles advanced to put themselves in range of the village in order to support the advance of the Light Companies. 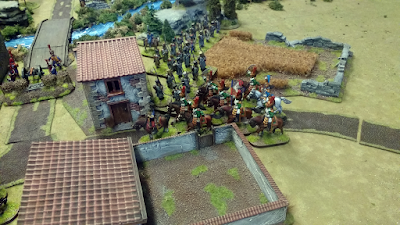 Seeing the Thin Red Line the Dragoons retreated back into the village while the Voltigeurs moved in from their rear to block the Light Companies. 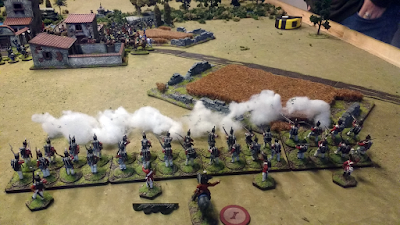 Having just reached long range, Major Sholto shook his companies out into line and began a fusillade of musketry. At this range the effect was not spectacular but it did make the French take notice. 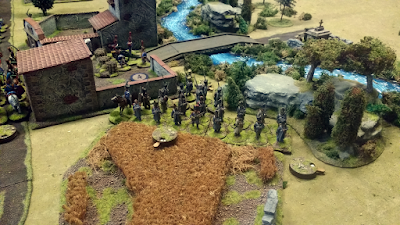 Meanwhile, the British Lights carried out an advancing fire upon the Voltigeurs spreading small but noticeable casualties among the French. Capitaine Forchette aptly pulled his companies back into the village around the bridge. The British would have to go in and get them. 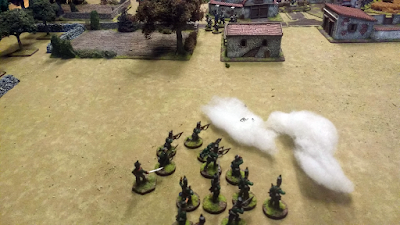 While things were moving according to plan on the British right flank, on the left a wrinkle had developed. Captain LeStrade had misjudged the positioning of the Rifle Companies. With the superior range of the Rifles it should have been a simple task to engage and clear out their French counterparts, should have. Finding themselves in range of the French muskets, the Captain wavered in indecision. 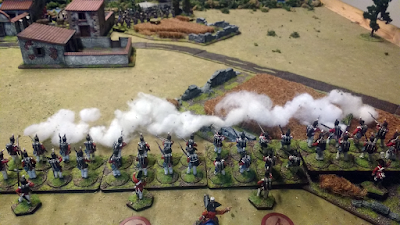 With little regard payed to the troubles of the green coated fools, the professionals on the right flank continued their advancing fire.

As if to add water to the gunpowder, in addition to the miscalculated position of the Rifles, the French Dragoons were now making obvious their intention to advance round the flank. 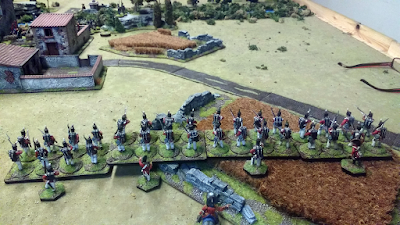 Finally, with no more French in sight the muskets of the Light Companies fell silent and Major Sholto ordered a general advance to the village. 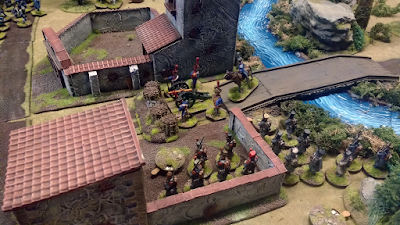 What awaited them inside the village would not be easy to clear, the Voltigeurs had established themselves within the walls and awaited the Brits. 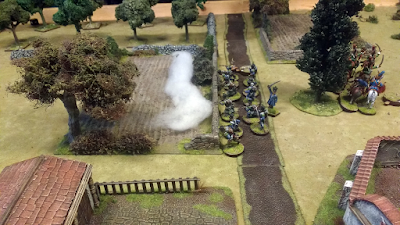 On the British left flank the situation was continuing to deteriorate. The French Skirmishers had locked the Rifles into a firing duel that was effectively pinning them in place. This created the perfect situation for the Dragoons. 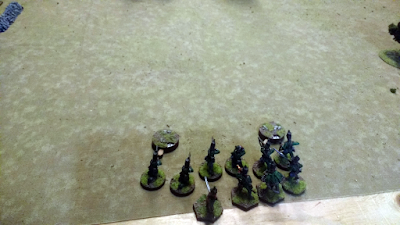 However, Captain LeStrade finally awoke from his stupor and ordered his depleted companies (really just one at this point) to fall back out of musketry range of the French. 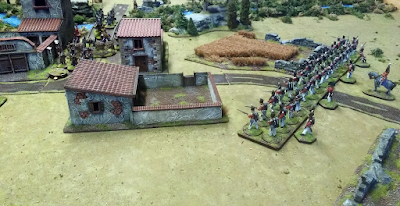 Still not seeming to notice the state of his left flank, Major Sholto maintained a sedate pace with the Light Companies. 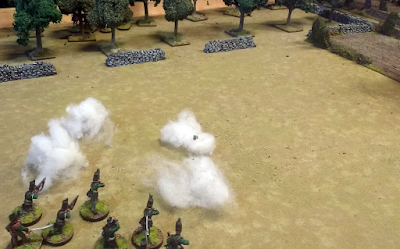 Now awake and present, Captain LeStrade noticed something moving in the orchard to his left. Realizing what was soon to happen he futilely ordered his men to fire upon the damn French cavalry.

Finally approaching the village walls, the Light Companies got out of line in preparation for assaulting the porcupine that they had let develop. 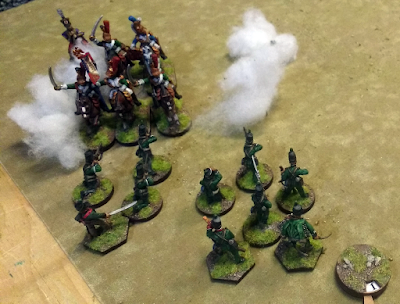 As the red coats reached the walls, the green coats had a different problem. Bursting from the orchard like a pack of wolves the French Dragoons descended upon the Rifles. To all present the outcome of this situation was abundantly clear. Hooves thundered, rifles cracked, and sabres struck, however... 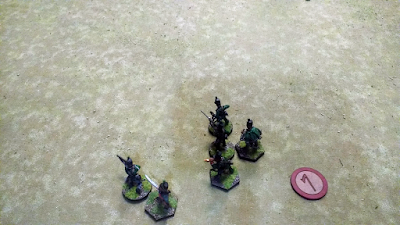 Miraculously the Rifles stood their ground and the Dragoons broke and ran, or perhaps Sean Bean had saved the day once again. 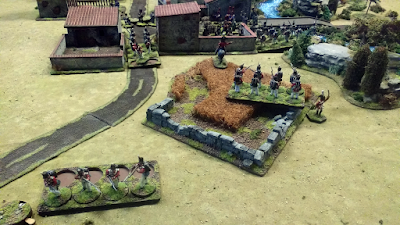 Not knowing that his flank had been in danger or that the bravery of a few good men had saved it, Major Sholto began the assault into the village. The first company down the road was repulsed but the followup company successfully got into the village itself. Near the river, the third company managed to push away a group of Voltigeurs as if they were nothing but air. This left a fourth company in reserve. 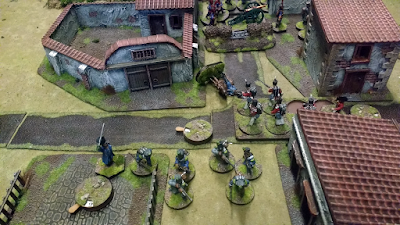 The most striking action was taking place at the center of the village where the French CO, Capitaine Forchette had been felled from his horse lying unconscious on the ground. All that stood to save him were the remnants of the French Skirmishers. 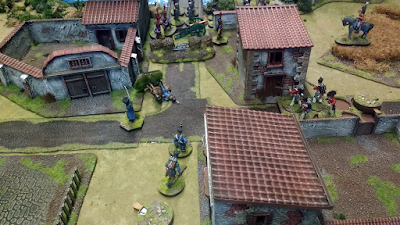 In a forlorn attempt to save their commander, the skirmishers entered the thick of the fighting. Tension was felt on both sides as the depleted British surged through the streets fighting desperate skirmishers. But the heroic save was not to be. The British maintained their resolve and continued to advance into the village. This action combined with the continued advance of the third company near the bridge brought the game to a close as the French force morale had dropped to zero. It remains to be seen whether Capitain Forchette will be returned to his people.

This was a nail biting game in places that had both of us worried. I cannot express enough how fun these rules are and the ease with which they lend themselves to AARs, they practically write themselves. We will undoubtedly play again and I will undoubtedly write it up again. Thank you to my Father for bringing the lovely figures by and being a good sport when I shot your Capitaine.
Email Post
Labels: 28mm Napoleonic Sharpe Practice