Skip to main content
Posted by Man For All Seasons September 10, 2020

Good morning everyone; as we all persevere through these interesting times, like many, I have continued my output of models. As always, life interferes with its usual and frustrating frequency but progress has still been made. The models shown here have been completed over the last few months and the keen among you will note that some of the Star Trek models showed up during the Archanis Campaign series. When I had finished those I had not yet completed enough other models to justify a post, but I now have. 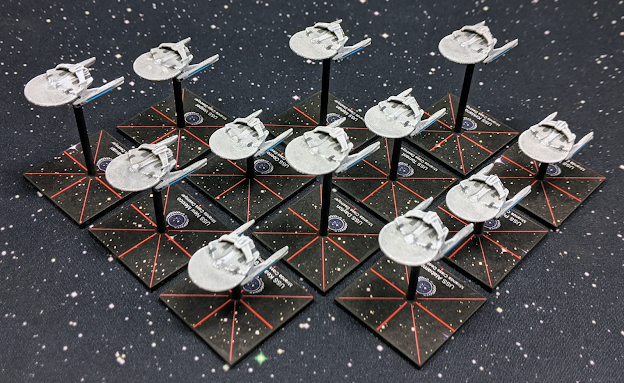 For some time my Dominion War era Starfleet force has been missing a key component. The Miranda Class Destroyer is a staple of the period that is needed in vast quantities (and yet I still need more). I have had these models sitting in my pile for nearly a year and just hadn't gotten around to painting them. I'll admit that I didn't know how to get started on them as they are lacking in detail (more a product of the scale than the model quality). However, they are now complete. The USS Mahan, Naken, Kirkland, Prinz Eugen, Torrent, Alabama, Kearsarge, Dayton, New Mexico, Assawari, Vosper, and Oberon join the ranks of Starfleet.
The Miranda Class Destroyer is from Shapeways and can be found here. 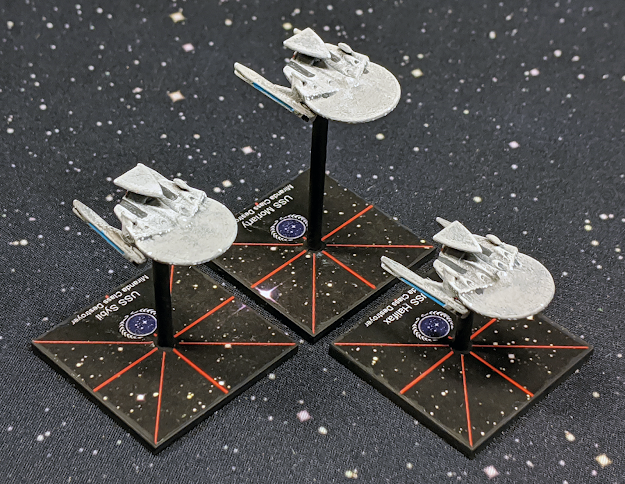 Next are the USS Moriarty, Halifax, and Sybil, Miranda Class Destroyers. These Mirandas are of the Antares subclass, a Dominion War era variant the sports a modern SWAC pod in place of the roll bar. Several episodes of DS9 show these ships in the background.
The Antares subclass is from Shapeways and can be found here. 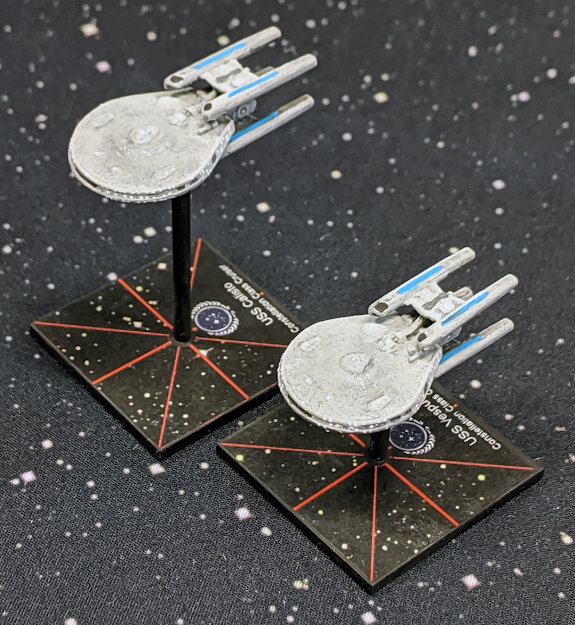 Finally for Starfleet is the aging Constellation Class. The USS Callisto and Vespucci are long past their retirement date but still serving in a secondary role. These ships probably won't see much use in the Dominion War but will be useful as I take my collection back towards the 23rd Century.
The Constellation Class Cruiser is from Shapeways and can be found here. 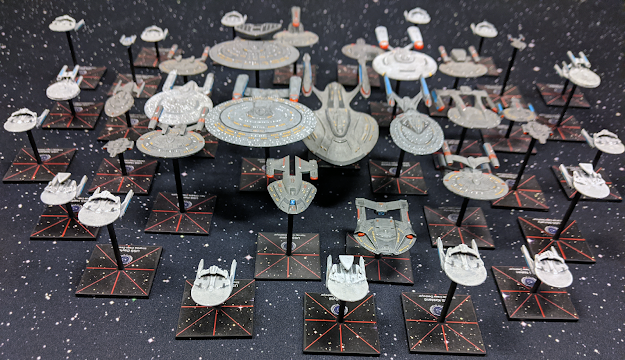 The addition of these 17 ships significantly increases the size of my Starfleet force, even if the overall combat capability hasn't changed that much. My gallery of Star Trek models can be found here. 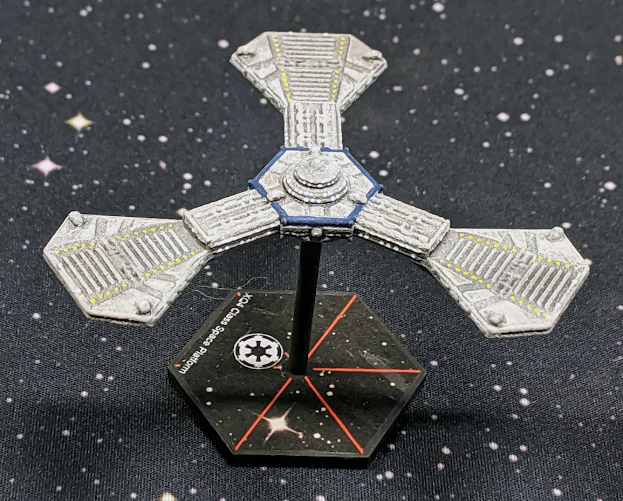 For my Star Wars collection I got a hold of a neat scenario piece in the form of an XQ4 Space Platform. Those who played the X-Wing and TIE Fighter video games in the mid nineties will remember this gem. Not very big, the XQ4 adds interesting options to smaller games. My gallery of Star Wars models can be found here.
The XQ4 Space Platform is from Shapeways and can be found here. 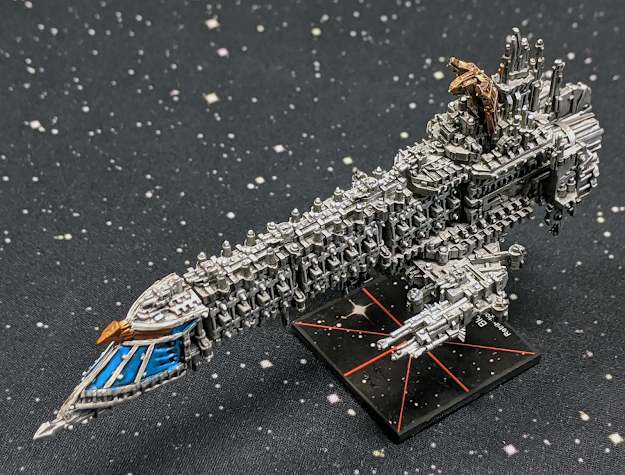 I have boxes of Battlefleet Gothic miniatures lying about my hobby area that have been in desperate need of attention for quite some time. Lacking any real motivation to tackle the pile they have mostly been left to gather dust. Recently, I chose to pull a few out and get them painted up (more due to feeling guilty towards these inanimate objects than any real need). The 'Bloodhawk', a Retribution Class Battleship, serves as the flagship of my nascent Imperial fleet.
The Retribution Class Battleship is from Games Workshop and is out of print. 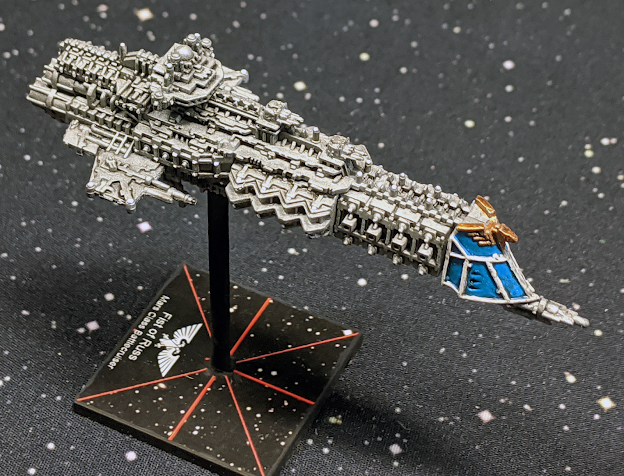 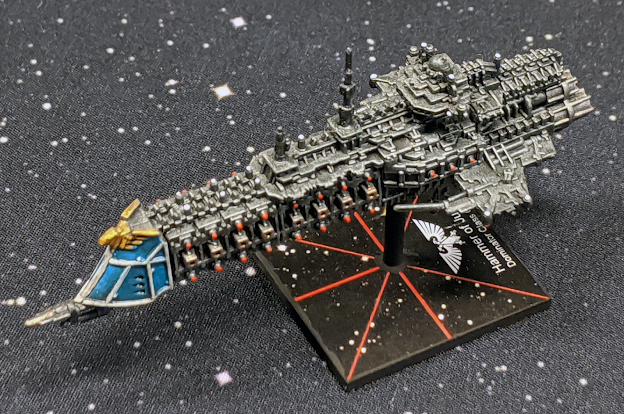 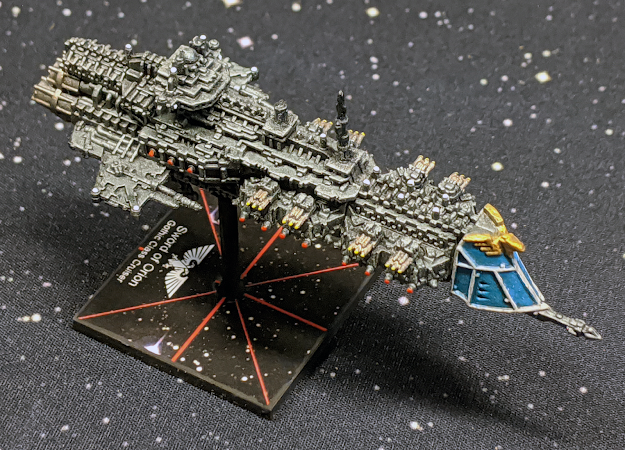 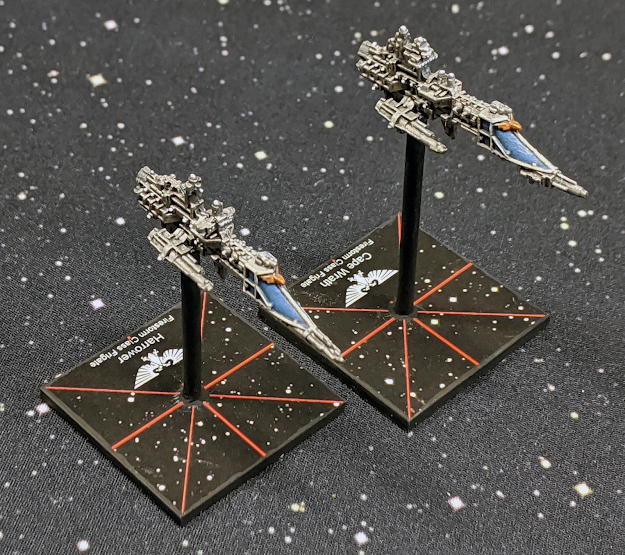 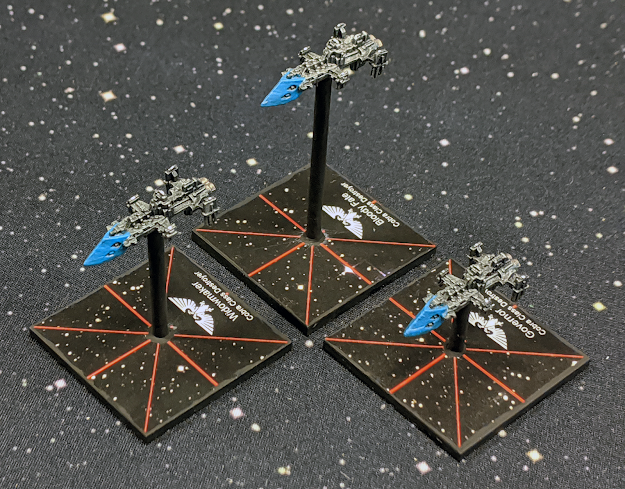 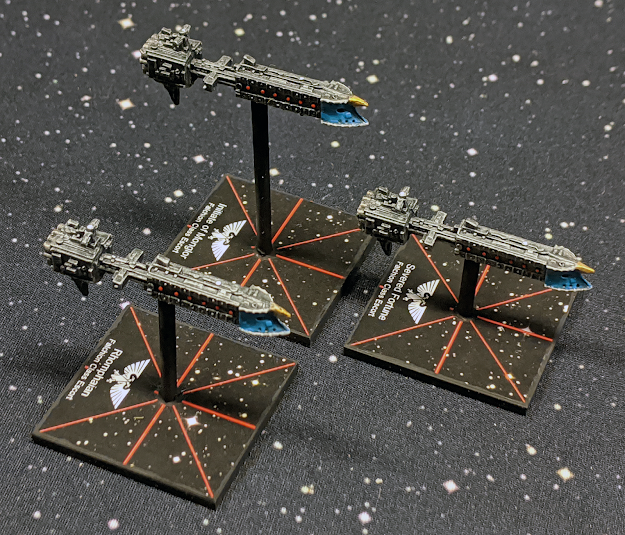 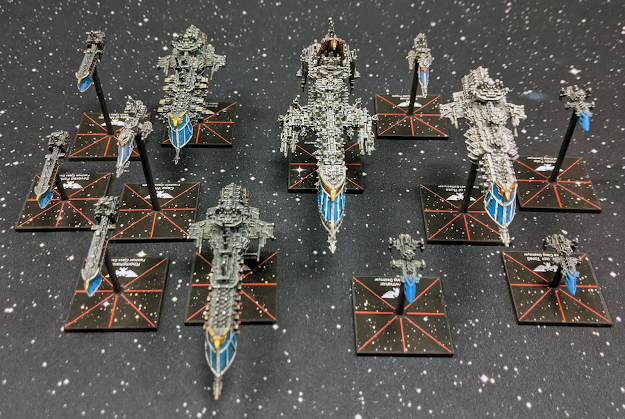 My Imperial fleet is just beginning but brings impressive combat capability to any fight, especially when you take into account the ludicrous dimensions of these vessels. These models represent only a fraction of the total gathering dust in the deep corners of my hobby area, not including Orcs, Chaos, and other forces. My gallery of WH40k models can be found here.
For now that is what I have completed and ready for pictures. Sitting on my shelves are nearly 50 newly painted ships for my Space Soviets that are awaiting decals (can't say they're done until they sport a Soviet star) as well as a Frostgrave warband (I know most of you come here for spaceships but I have needs too).
Check me out on Instagram.
Join me on Facebook.
Email Post