Skip to main content
Labels
Posted by Man For All Seasons November 27, 2018

Klingons, Klingons, and Klingons Oh My!

Good evening everyone, after two months I am finally back from my work excursion and primed to get some posts done. Upon my arrival home a package was waiting for me that had arrived while I was gone, a package from Shapeways.com, my favorite kind of package. For the past few months I have been quietly ordering a Klingon fleet and have managed to keep it secret from my gaming companions though not through any effort, I merely forgot to tell them. This realization gave me an idea and thus was born the game that occurred this past weekend.

I informed my good friend Adam that I had a surprise for a game and to prepare a force of a set point value. I told him he could compose this force out of anything in either of our collections indicating that this was a wholly new project. Little did I know the irony of what he would bring.

Setting myself to work I painted the Klingon fleet in two days (oh post deployment leave) and readied for Adam's arrival. 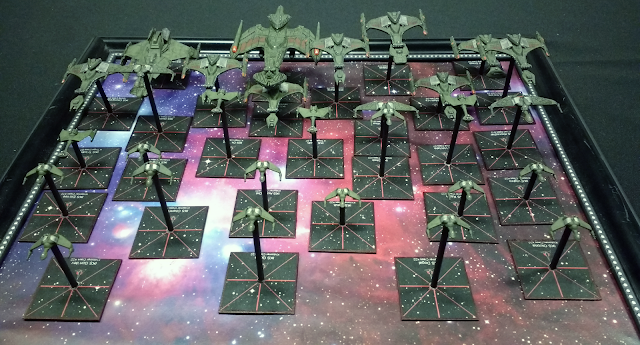 My fleet is quite extensive and includes the following:

Adam arrived with Phil in tow to command his fleet and I had brought Kevin to assist me. Pleasantries were exchanged and compliments on paint jobs and then the fleets were deployed. For his fleet Adam had chosen to bring a 'small' Colonial task force supplemented by Klingon reinforcements, ironic! This was not exactly what I had intended for this game to be but we would have a go regardless. 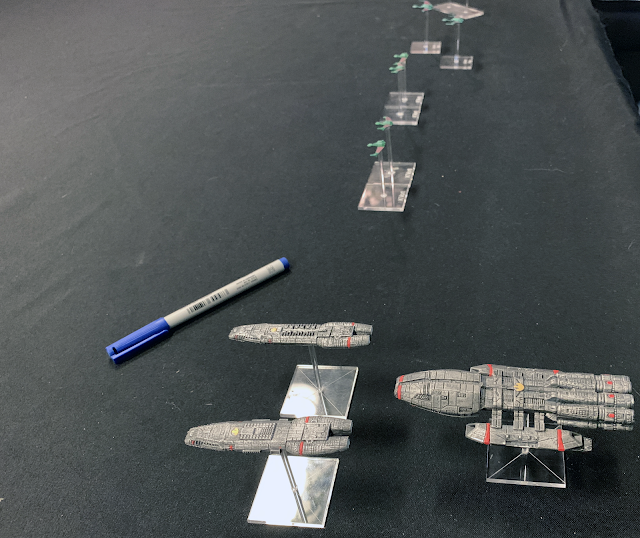 The fleet that Adam brought was centered on a Mercury Class Battlestar and consisted of the following:

Adam's Klingons can be differentiated by their clear plastic bases. 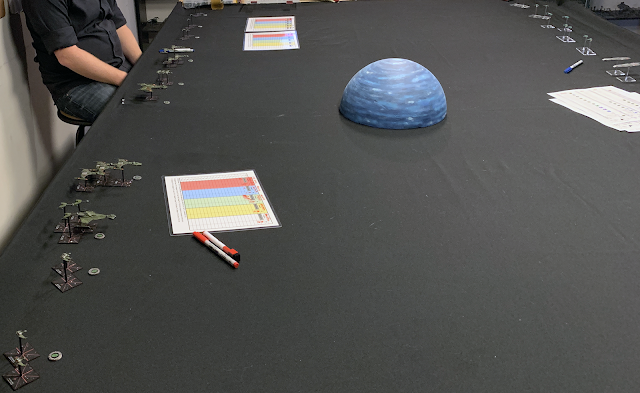 We set about deploying our fleets by rolling off the command dice of our respective flagships with the lower roller placing a squadron on the table. During this process Adam was mercilessly reminded of his history with placing all his eggs in one basket (sorry!). In this case half the value of his fleet was in the Mercury. Upon deployment the two fleets began their maneuvers. The Colonial Fleet, with Klingon Allies who were immediately deemed traitorous House of Duras, sailed towards the true Klingons as if they had already won the game. The Klingons began Operation Big Whale. This plan held little in the way of tactical subtlety nor really any end game that involved victory. Rather, the scope of Klingon operations resided solely in the killing of a Battlestar, more to prove a point than anything else. 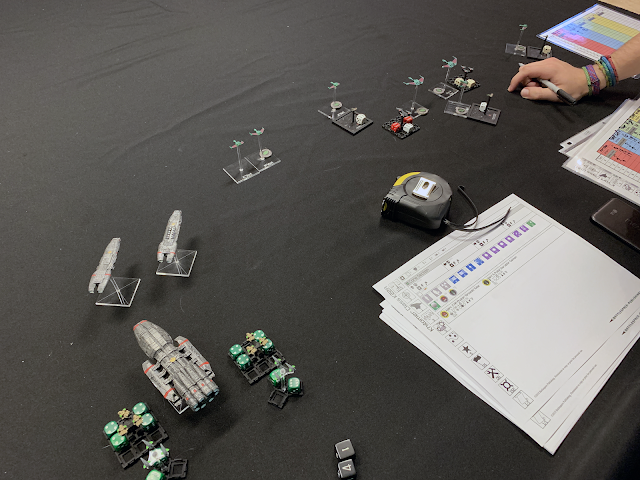 As the two fleets entered weapons range, the Klingon left flank began a long range torpedo bombardment of the Colonial cruisers. The dense flak fields of the hulking monsters prematurely detonated many torpedoes but some got through and defaced their noses. Subsequently the cruisers began a clockwise rotation to bring their broadsides to bear. Long range missiles from the Minerva Class Cruiser streaked across more than a light second and impacted the Negh'Var's bow shields. Much to the chagrin of the Colonials the shields of this tough ship did not break. On the right flank the opposing sides remained cloaked. 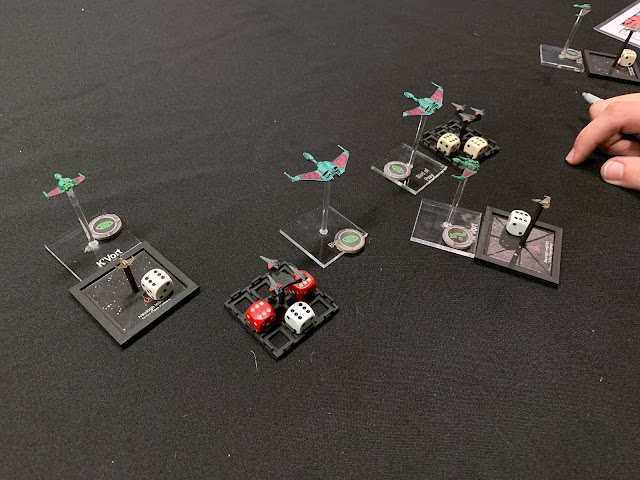 As the range continued to close the Klingon commander dispatched 40% of his To'Duj fighters to hunt down Duras traitors. This prompted Vipers to come to the aid of Bird of Preys, a truly strange sight. In the ensuing dogfights the Klingon fighters perished at triple the rate of the Vipers but the Klingon commander's intent had been realized. The primary intercept component of the Battlestar had been exhausted and would now need to return to the flight decks to rearm, a task that would give the remaining Klingon fighters some breathing room. Over the following turns Klingon To'Duj fighters would reek havoc throughout the Colonial right flank harassing their Duras allies and making them a non-entity. 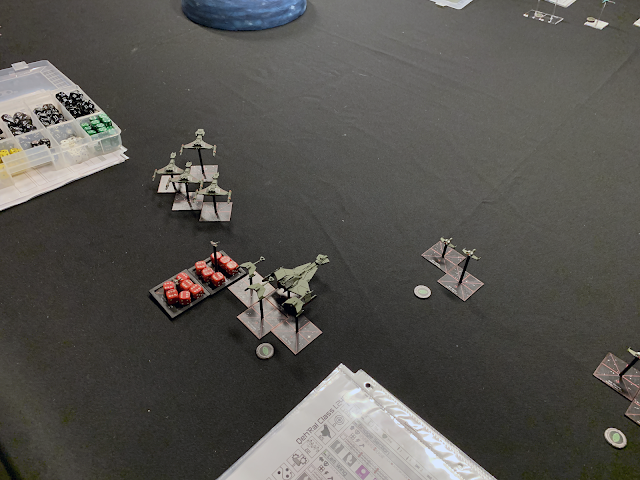 On the Klingon right flank, a group of cruisers turned towards the center to hopefully provide support against the giant hulks of metal their brethren were facing. The remainder of the right flank remained cloaked and played cat and mouse with their opposition. Critically, the fighter force from the Qeh'Ral Class remained un-engaged, this would prove useful later. 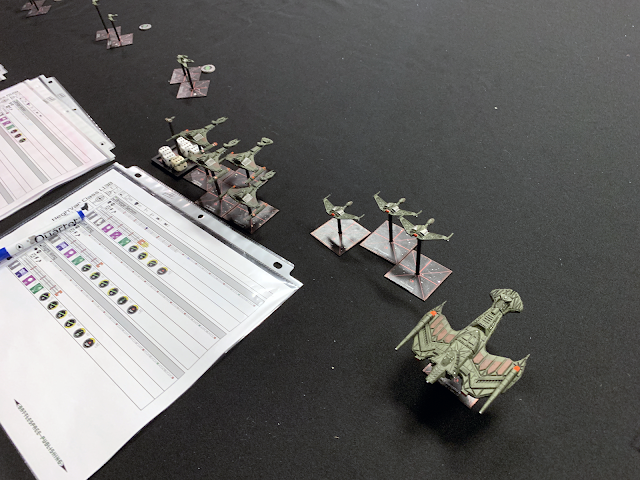 The lines on the left flank grew ever closer and the Klingons switched targets and began pouring torpedo fire into the Mercury. This monstrous ship's flak field again knocked down many but not all of the antimatter warheads. Blackened pockmarks appeared slowly across its hull. 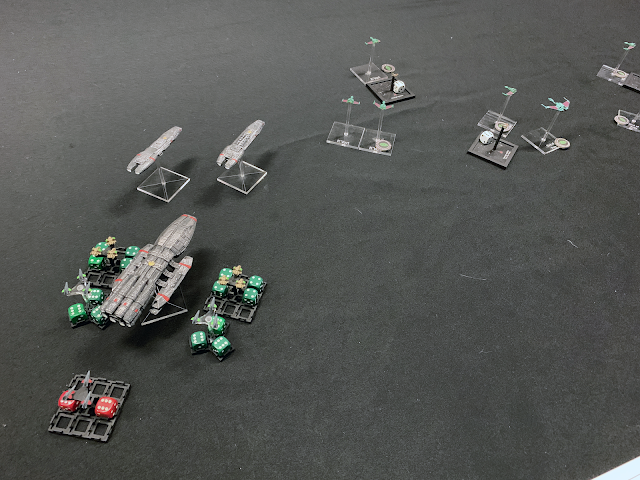 Like its smaller escorts, the Mercury turned to starboard to present its flank, unfortunately this was timed with an incoming volley of photon torpedoes that resulted in a few fires and decompressions throughout the port flight pod. Meanwhile the Klingon fighters were having a field day with the opposing Birds of Prey. Very quickly the herd thinned (or would that be flock?). 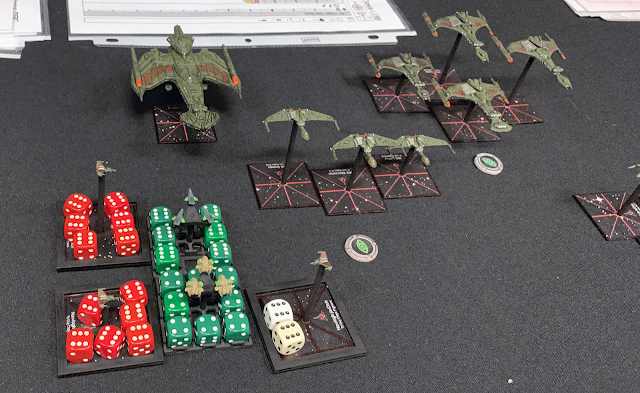 Just as the lines entered optimum range the Colonial commander threw a Hail Mary and sent the strike component of his air wing straight down the throat of the Negh'Var. Thankfully the frugal nature of the Klingon right flank commander paid off as the remaining To'Duj fighters rushed in. The CAG was now presented with a choice. His Vipers, themselves loaded with nuclear missiles, were escorting a large formation of Raptors with nuclear missiles. With the incoming Klingon fighters he could choose to break off, dump his ordinance, and fend off the enemy fighters or brave their fire and attempt a missile strike on the enemy flagship. He chose the latter. He chose poorly. Fourteen squadrons of Klingon fighters tore into the ponderous formation like a Targ in a china shop. None of the Colonial air wing made it back to the Battlestar.

As this happened the two sides opened up with their primary weapons suites. Shells slammed into the IKS Ditagh (Qang Class D6) mercilessly until she was one with the interstellar dust. Frankly the firepower applied to the ship was excessive but in Adam's words "I wanted to F%$@ing kill something!" In return the entire Klingon left flank tore into the Battlestar with close range disruptor fire tearing holes deep into her superstructure until finally hitting a Tylium fuel tank. In a blink the Mercury was gone. The subsequent morale checks on the Colonial fleet saw the fleet break and run, expected for Duras but unfortunate for the Colonials.

I would like to thank Adam, Phil, and Kevin for a decidedly odd but fun game. I will do a detailed post of this new fleet shortly and I have also ordered one more Klingon ship to use for a painting guide.