Skip to main content
Labels
Posted by Man For All Seasons November 29, 2018

Good evening everyone, as promised in my last post I have set up the studio and taken some glory shots of the new Klingon fleet. Astute observers will note that this is not my first Klingon fleet. For many years I had a hodge-podge fleet of so-so models gathered from many sources (much like my old Starfleet and Dominion collections). However, with the advent of 3D printing and high quality available models I embarked on a Stalin like 5 year plan to replace my collections with 3D models where necessary. The key factors in deciding to replace a model are quality and scale; if the quality of the model is less than ideal or it is not 1/7000 (or very close) then I endeavor to replace it with a 3D print. This obviously comes at a price as services such as Shapeways can be expensive yet I decided that I am a grown ass man with a government job and can afford it over time if I am careful and have my wife's approval. The different approach I made with this fleet as opposed to my other 3D printed fleets was to wait until I had gathered all the intended models before painting. While I enjoy painting my Starfleet models whenever I get them, the process of matching paintjobs is a pain. Thus I shouldn't need any more Klingons (yeah right). 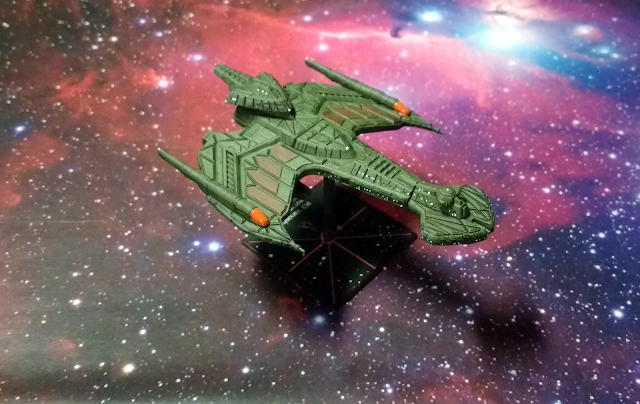 The flagship of this fleet is a massive Negh'Var Battleship, the IKS Vangshu'a. This was a wonderful model to paint, perfect crisp detail that spoke to my inner muse. This model can be found here: Negh'Var 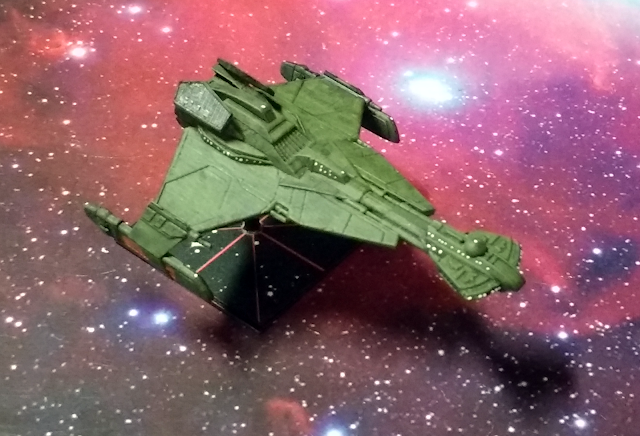 My fleet has a second battleship in the form of this Qeh'Ral Class, the IKS Hugh'Ragh. The Qeh'Ral is a beta canon ship from the Star Trek: Armada II video game. This model is not a perfect match for the video game avatar but is gorgeous nonetheless. This model can be found here: Qeh'Ral 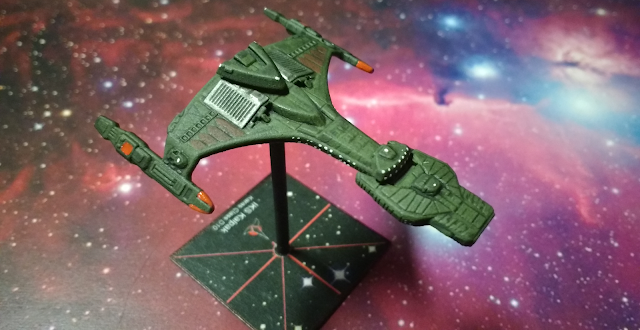 Another beta canon ship, the Karas Class is a strike cruiser boasting twice the torpedo tubes of a Vorcha. The Karas is mentioned in a Star Trek novel but never shown so this model was a perfect fit. The IKS Kalpak is the only one of this ship I intend to have. This model can be found here: Karas 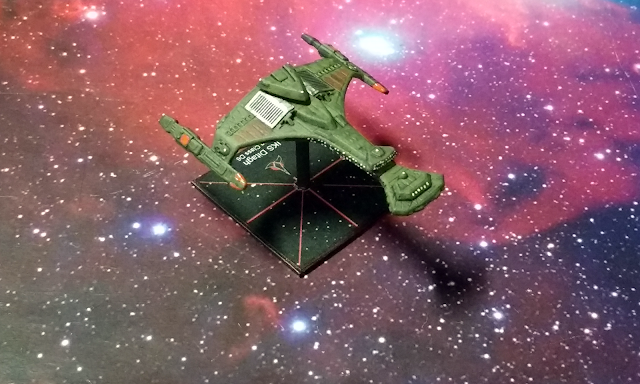 This strange looking ship is the IKS Ditagh, a Qang Class cruiser. The Qang class is a beta canon vessel mentioned in a number of TNG novels as an advanced cruiser built upon the lessons of the Vorcha and Negh'Var. This model can be found here: Qang 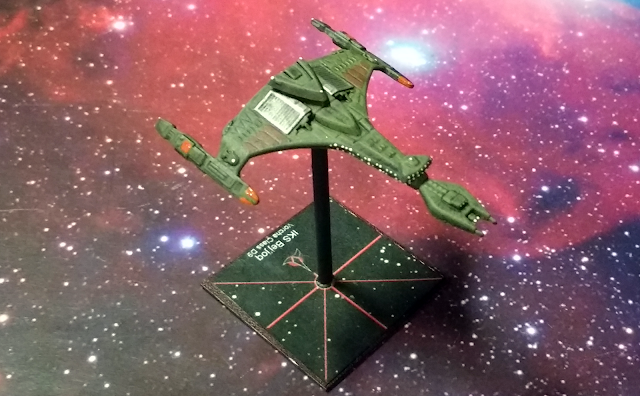 A TNG era Klingon fleet requires a healthy compliment of Vorcha Class cruisers and my fleet is no different. Vorchas are difficult to paint not because of scaling or details but because of the color uniformity of their hulls. Thus I chose to add a flair of Sienna highlights on the wings reminiscent of Birds of Prey. This model can be found here: Vorcha 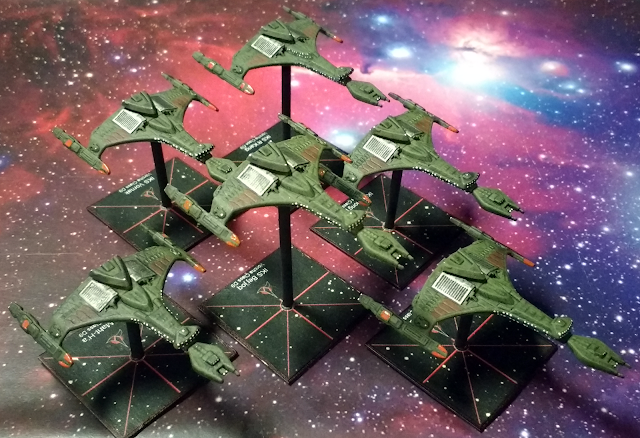 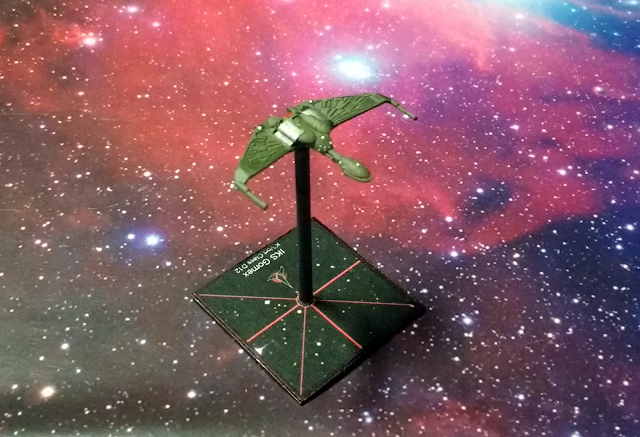 While I believe the existence of this ship is rather stupid I cannot deny it. Thus the K'Vort Class cruiser exists within my fleet. There is some controversy over the naming of this ship and its smaller brethren so I guess I have picked a side by naming it a K'Vort. Either way it is a ludicrously large Bird of Prey. This model can be found here: K'Vort If I think the ship is silly why did I buy three? Because I am obsessive, or an idiot, or both. Either way the fleet includes the IKS Gomex, Khorazhar, and L'Khor. 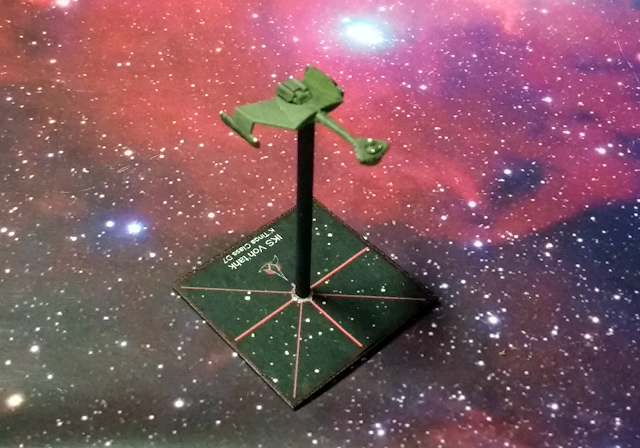 Like Starfleet's Miranda, the K'Tinga seems to be the Klingon ship that just doesn't go away. The K'Tinga and D7 are seen from Enterprise all the way to the Dominion War. Granted some of these appearances were due to budget/time constraints but it still seems like the little cruiser that could. This model can be found here: K'Tinga 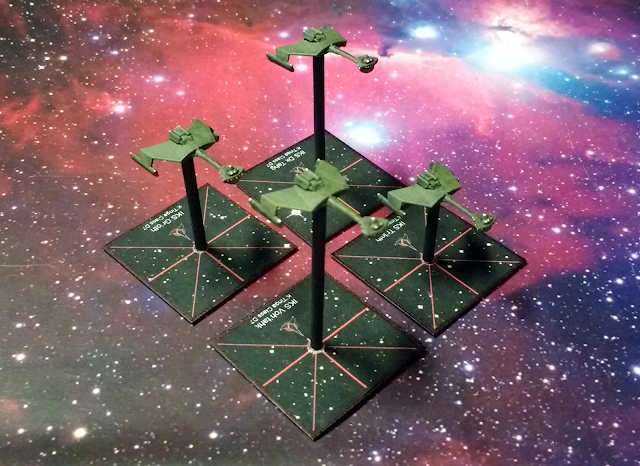 I didn't want too many of these little guys as I will inevitably be buying more for a TOS project, though those ones will be painted in grey. The IKS Dk Tahg, Gr'oth, Tr'loth, and Voh'tahk are the oldest class in my fleet. 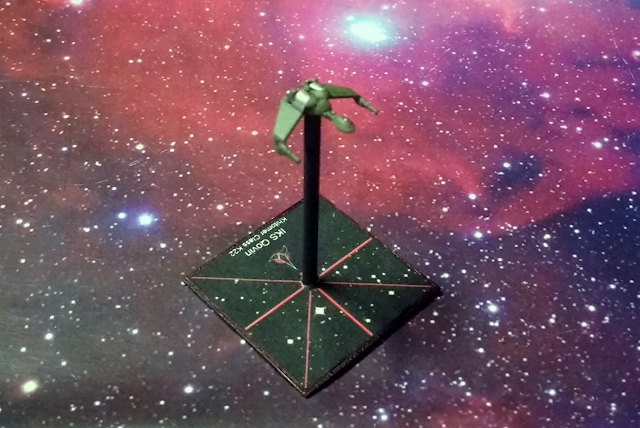 Finally, you can't do a Klingon fleet with birds of prey. What is the class name of these little guys? This seems to be a reoccurring question among fans and since I label my bases I had to take a stand (pun intended). Pulling from beta canon sources, specifically novels, I decided that the TNG era BoPs are the Khitomer Class with the TOS era vessels being the B'Rel Class. This model can be found here: Khitomer 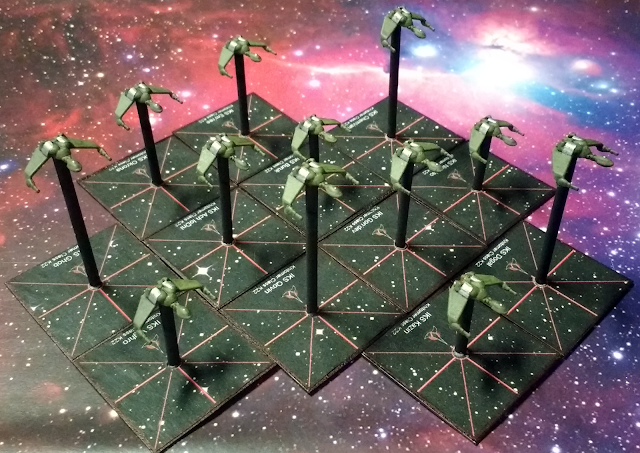 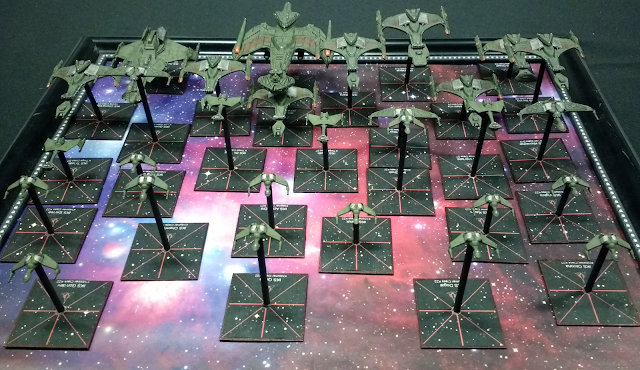 If there are any other paint jobs I have done that you would like some info on or for me to do a tutorial for just leave me a note in the comments or post on facebook at: BattlespacePublishing

Most of the 3D printed models you see in my fleets can be found through this database: MinisDatabase
Email Post
Labels: Metaverse Star Trek Starships