Skip to main content
Labels
Posted by Man For All Seasons February 20, 2019

Good evening, This past weekend I invited Adam and Will over for a game of spaceships. The primary motivation for this scenario was to test some new FTL rules for the second edition of the game. With that in mind we threw Earth Force from Babylon 5 against Colonial Fleet from BSG. This would allow us to have ships with a jump drive fighting ships with a dimensional drive. 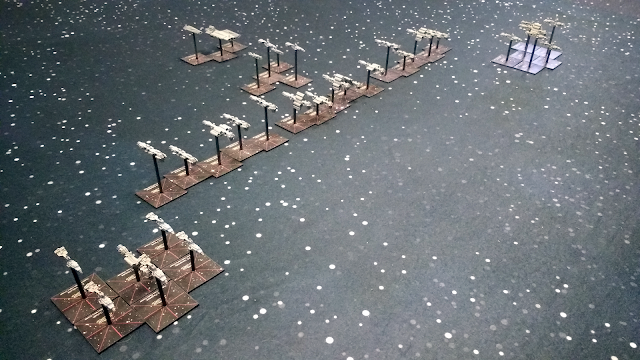 The Earth Force fleet consisted of the following:

This force composition was intended to be a heavy battle line, the frigates and other escorts were presumably in hyperspace or far on the flanks. 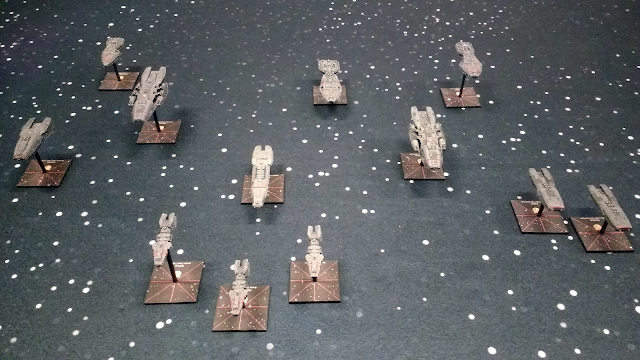 The Colonial fleet consisted of the following:

This force composition was intended to be reflective of the first Cylon war with a few pre-cylon legacy designs mixes in.

We started with the pre-battle steps, rolling for initiative, choosing scenario, and picking terrain. Earth Force won the initiative chose a basic encounter scenario and placed a medium sized gas giant on one flank of the table clearly trying to limit the playable area. With that done it was time for deployment. 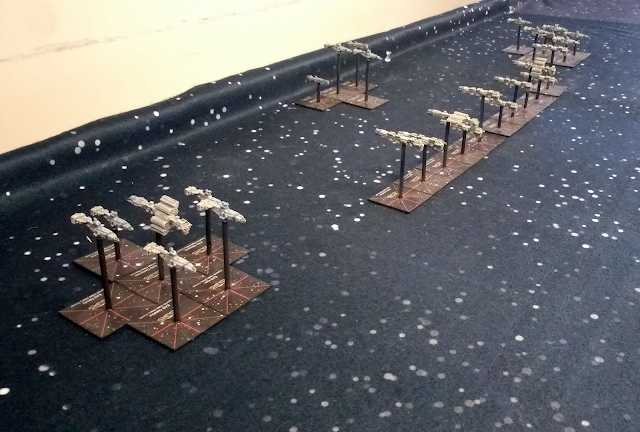 The Earth Force deployment was textbook. Facing the Colonials was a battleline centered on two squadrons each of four Nova Dreadnoughts and a commanding Omega Destroyer. Guarding each flank was a squadron of five Hyperion Heavy Cruisers and an Omega Destroyer. In support of the battle line was an ELINT squadron of two Oracle Fleet Scouts and two Hyperion Heavy Cruisers. This was an intimidating line of guns for the Colonials to face but it wasn't all the ships at Earth's disposal. 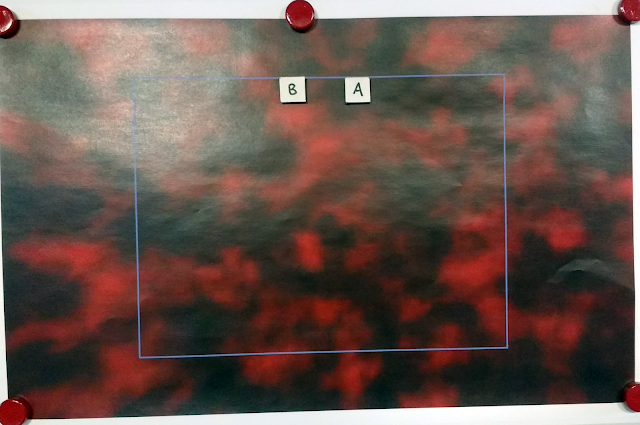 Sitting in hyperspace were two more unidentified squadrons. Earth Force could use these squadrons as a reserve or as a flanking force, if you can count getting behind the enemy via another dimension as flanking. 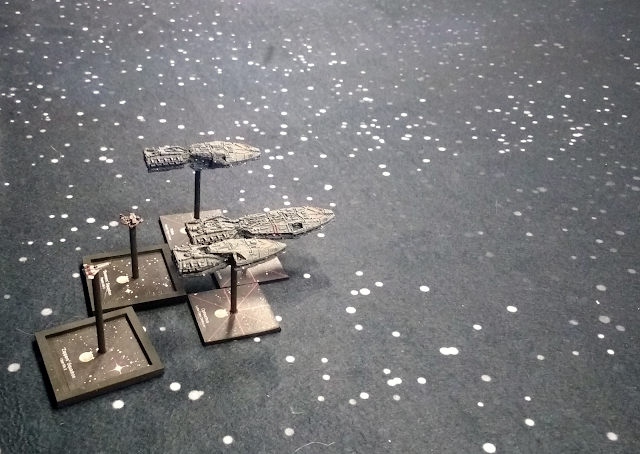 The Colonial forces were deployed to the front of the Earth Force battle line in two squadrons. On the right flank sat the Rhea [Nemesis Class Heavy Cruiser], Pallas [Hecate Class Cruiser], and Ophiuchus [Luna Class Destroyer]. All three of these ships were legacy designs from before the outbreak of the Cylon War so their utility was in doubt. 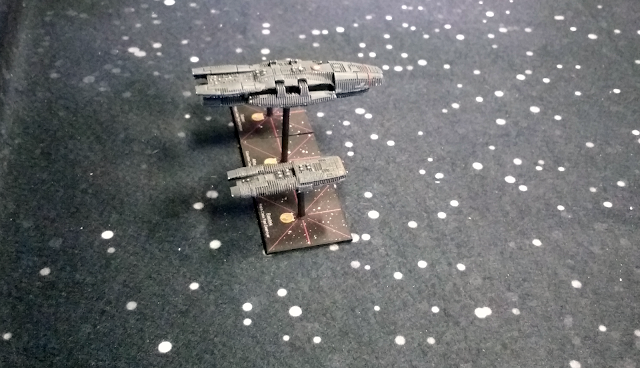 On the left flank sat the Athena [Columbia Class Battlestar], Basilisk, and Saber [Kopis Class Fast Destroyer]. This squadron was much more frightening. Staring down the nose of a battlestar is never calm inducing regardless of the era it was from. Despite this nervousness it was noticed that there were Colonial ships missing. The missing ships were deployed in reserve to be brought into the fight at an inopportune moment for the Earth fleet. 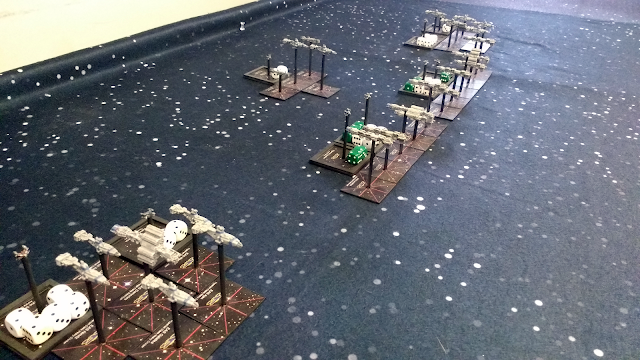 With the battle begun the two fleets began moving towards each other, Earth meandering more than racing. It was clear they had little interest in fighting a close engagement with the hulking Colonial ships. Aurora and Thunderbolt Starfuries exited the blocky Earth ships at a prodigious rate, a sight that made the Colonial pilots a little nervous. In hyperspace the two remaining squadrons pondered slowly hoping not to overshoot their mark.

With a bit more gusto the Colonial ships put their foots to the floor trying to close the distance. It would not do them any good to get into a long range shooting match with Earth Force. Viper Mk IIs and Raptor Mk Is shot out of their motherships but in far less numbers than the Starfuries facing them.

Breaking the silence of the vacuum a fusillade of laser beams snapped across the void between the ships focusing on the Ophiuchus [Luna Class Destroyer]. Far earlier than the Colonial Admiral would have normally thought, his ships were being fired upon. No one laser cannon was enough to threaten the mighty beasts of the Colonial fleet but they were facing a wall of Earth Force Dreadnoughts, the same wall that beat the Dilgar. Eventually the armour and superstructure of the 'little' destroyer melted away leaving her with gaping wounds that would fit a school bus. A small amount of fire was put towards the Basilisk [Kopis Class Destroyer] but she was made from sterner stuff than that pre-war hulk. 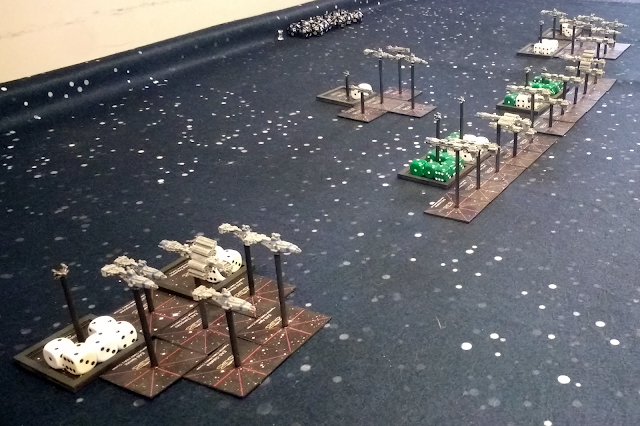 As the lines grew closer the Dreadnought wall continued to pour on the hate but the Earth Force Admiral began to get nervous. In response to the damage it had taken, the Ophiuchus turned to port and presented fresh armour and the rest of the Colonial fleet payed little attention to what must have looked like an 80's rock concert laser light show. Perhaps desperation overrode his common sense or perhaps just impatience; the Earth Admiral sent a communication to Hyperspace. 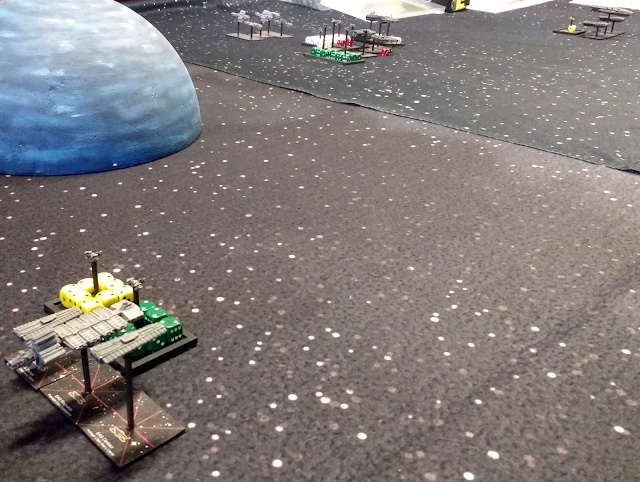 Breaking the stalemate two jump points formed and disgorged more Earth ships. Far on the Colonial right flank just off the gas giant the Earth carrier group entered normal space. Having already launched their Starfuries in hyperspace, the Ragnarok [Poseidon Class Supercarrier] and her escorting Avengers were ready to rock. 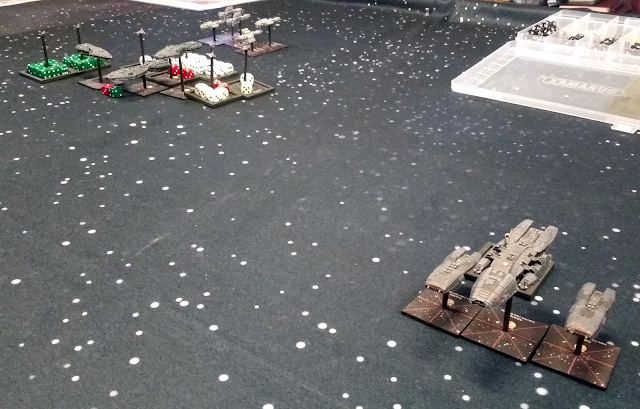 Hoping to sow chaos in the Colonial lines a squadron of five Omega Destroyers jumped out in a textbook manner landing just 80,000km to the rear of the Colonial cruiser squadron. Within moments Heavy Laser Cannons, Heavy Pulse Cannons, and Energy Mines struck at the pincered Colonial cruisers. In short order the Pallas [Hecate Class Cruiser] had much of her engine section reduced to mince meat. As revenge the Cadmus [Omega Class Destroyer] had her forward section simply removed. 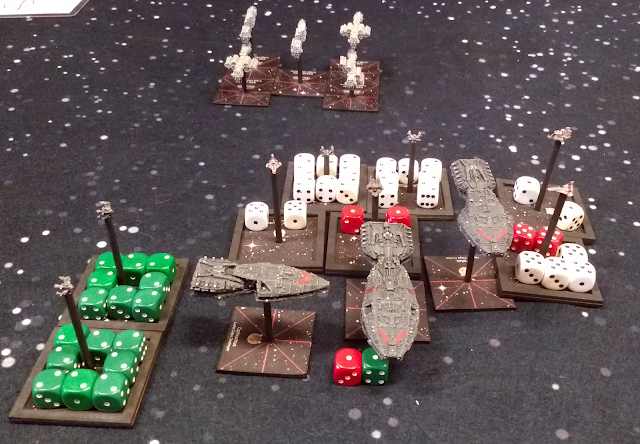 Wanting in on the fun, the carrier group decided to add some hurt to the party sending 16 squadrons of Aurora Starfuries to assist the Starfuries from the Omegas. Intercepting them were eight squadrons of Viper Mk IIs with Raptor support. This attack while cathartic for Earth was also costly. Of 31 squadrons that went in only nine made it out. The combination of the Flak fields, Vipers, and Raptors with Anti-Fighter Missile Pods was deadly. However, most of the Colonial fighter strength now on the table had been spent. 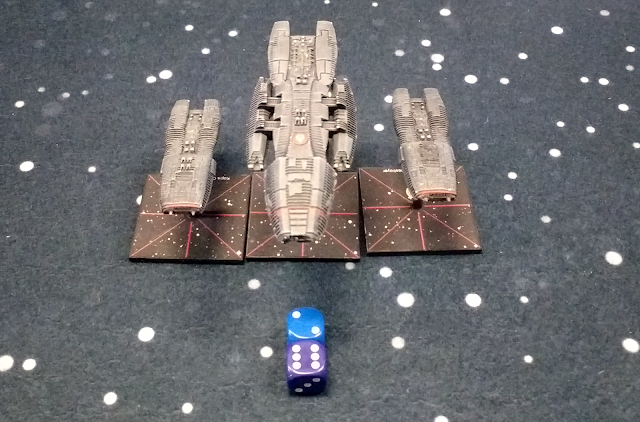 As that massive furball was being fought, the Athena [Columbia Class Battlestar] and her escorts continued to charge the Dreadnought Wall. Trying to keep the behemoth at bay the Earth line fired a number of energy mines at the squadron. However, no one does point defence like Colonial Fleet. None of them got through.

It was at that moment that the Earth Force Admiral was reminded that the Colonials had reserves too. Jumping in from outside the battlespace, the Cerberus [Columbia Class Battlestar] and her three escorting Brenik Frigates appeared directly behind the Earth Force carrier squadron. This was not going to end well. 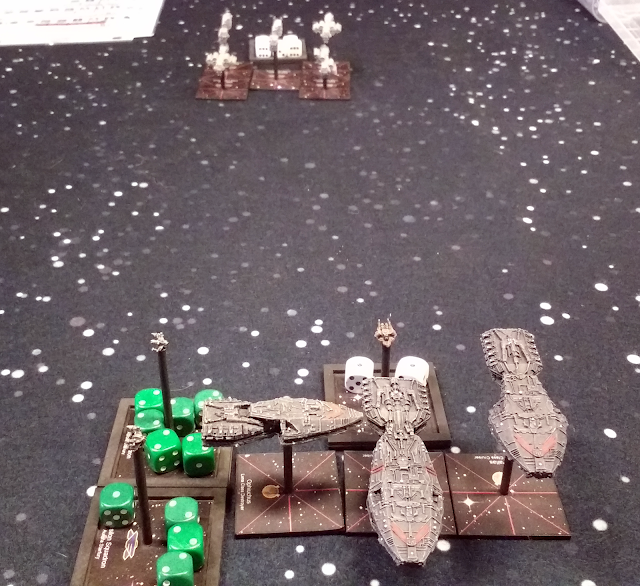 In response to this most unfortunate event the carrier's fighters were forced to be recalled from the fight in the middle of the table. 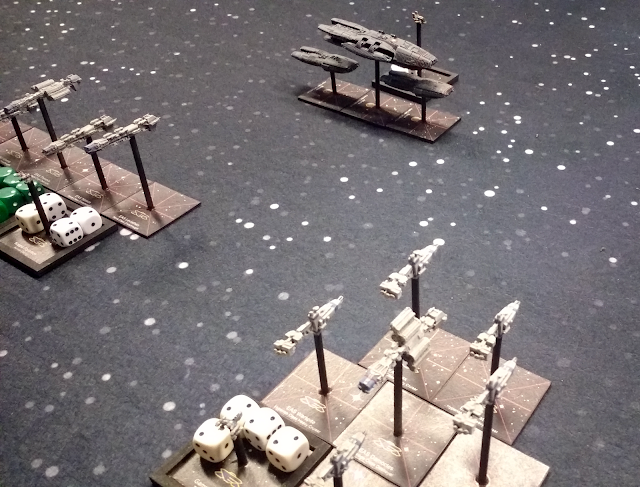 To add insult to injury, it became apparent that the Athena [Columbia Class Battlestar] had entered gun range. In a classic Colonial maneuver, without altering her vector, the Athena turned her starboard side to the Earth battle line and opened up with her gun batteries. The target of the battlestar's anger was not surprising. The EAS Athena had the audacity to bear the same name as the Colonial ship and it had to be put down, it was the only decent thing to do. By the time the battlestar was finished there was little left to identify the Nova Dreadnought that had caught her ire. 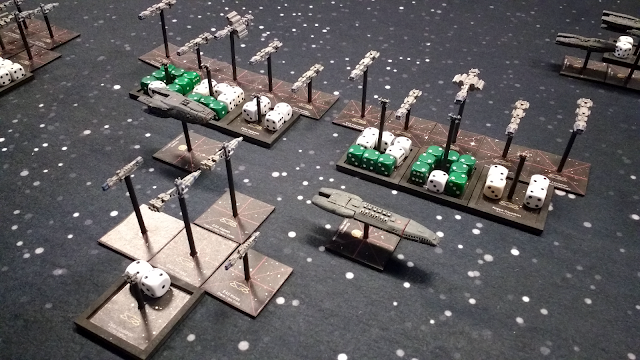 Amidst the rain of metal falling upon their line the Earth ships detected some strange readings behind them and then suddenly there was a flash. In an instant the Sovereign [Apollo Class Heavy Gun Cruiser] and the Solaria [Olympia Class Light Cruiser] had appeared in the middle of the Earth line. Uh oh. 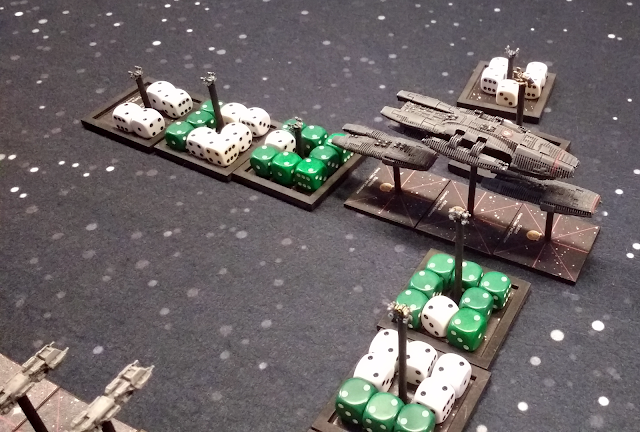 In this most desperate of moments Earth had little choice but to go all in. Every Starfury squadron in the fleet had a target, no one was on CAP. 41 squadrons alone hit the Athena from three different directions. 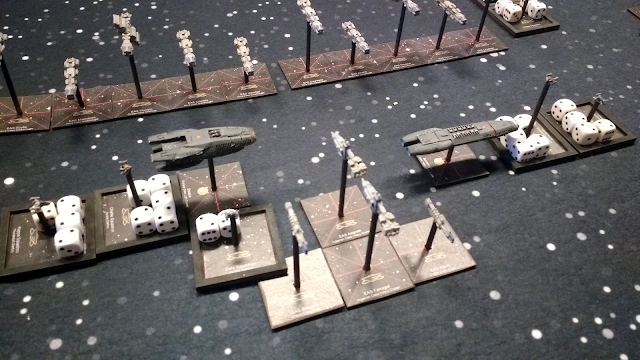 The Sovereign and Solaria were not left out each receiving their own helping of nimble Earth fighters. 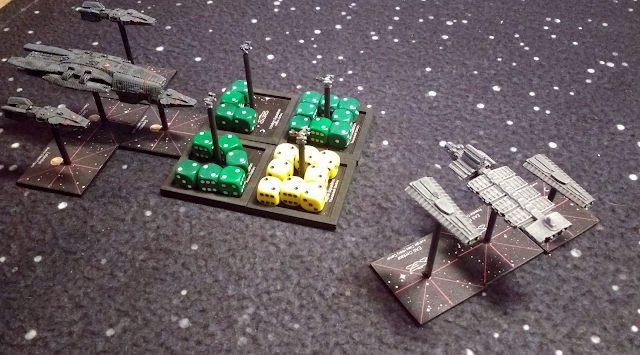 Alone and away from the main fight the carrier squadron also fought for its life sending every fighter they had straight down the pipe at the Cerberus. 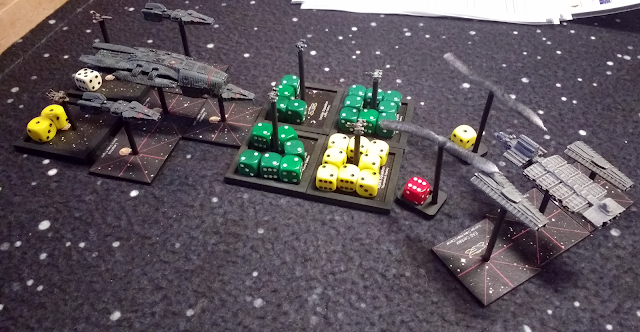 The Cerberus unleashed the full force of her gun batteries at the Earth Force flagship. Mountains of metal were thrown at the Ragnarok but a curious thing was happening, not all of the shells were making it. Those damned Earth Force Interceptors! They were actually shooting down the rail cannon rounds. In anger the Cerberus flushed her missile tubes. Her Interceptor grid too overwhelmed to even make an attempt, the missiles struck with fury shredding the back half of the might Poseidon Supercarrier, destroying her. 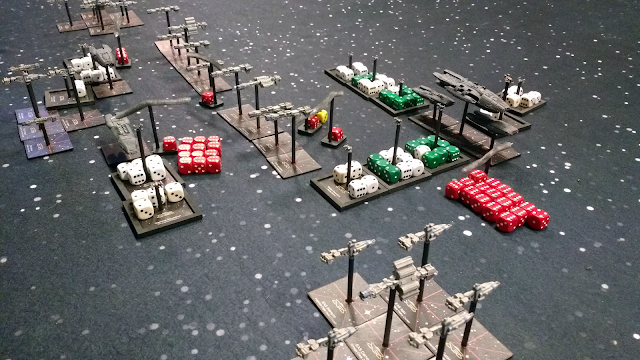 The main fight was shaping up to be even more dramatic. The gunfire from the Athena had claimed another Nova Dreadnought but the Sovereign and Solaria had much worse luck (i.e. some pretty bad dice rolling). In response the Earth battle line let loose with every weapon at their disposal. An outside observer might remark that they looked like laser porcupines. The forward guns of the line sheared off the starboard flight pod from the Athena. The rear guns picked away at the Sovereign and Solaria. Half of all the missile cells in the fleet were salvoed at the Athena, Sovereign, and Solaria. 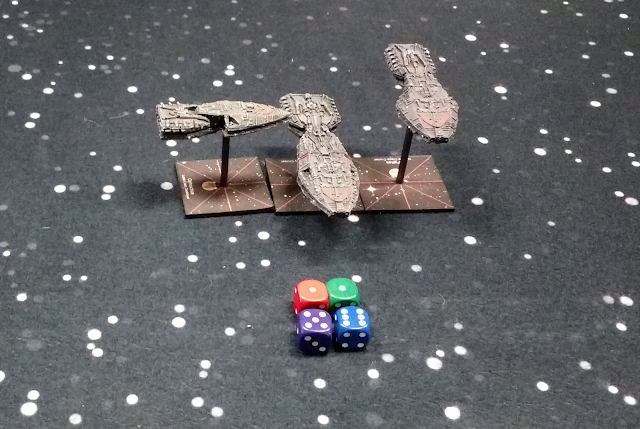 Just so they wouldn't feel left out a horde of Energy Mines were thrown at the cruiser squadron. 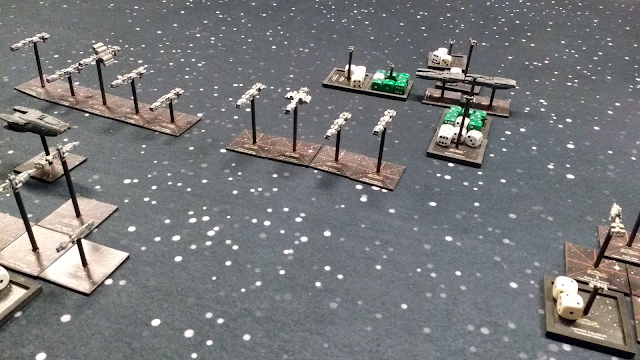 When the explosions had faded the carnage was remarkable. With her starboard flight pod no longer attached and greater than 70 ship to ship missiles hitting her hull, the Athena buckled and went dark. The Sovereign fared little better, with a few less missiles hitting but less metal to burn, she died too. 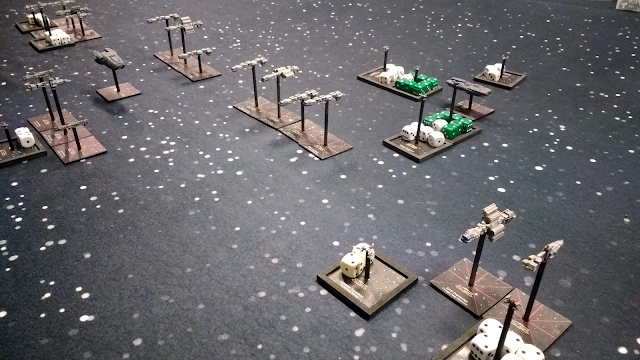 However, the real tragedy was about to happen. Both sides had just lost their flagship which required some morale checks in both fleets. For the Colonials the Saber [Kopis Class Fast Destroyer], Rhea [Nemesis Class Heavy Cruiser], Pallas [Hecate Class Cruiser], and Lelantos [Brenik Class Frigate] struck their colors and exited the battlespace. 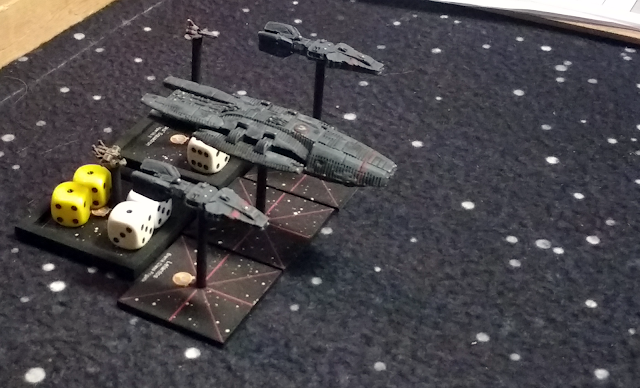 This left the Colonial fleet with an untouched battlestar as their primary combat power and Earth with half a battle line to fight it. Neither side was keen to try their luck and decided that maybe diplomacy isn't such a bad idea after all.

This was an exciting game for a number of reasons. Earth and Colonial fleets operate very differently on the battlefield. Earth Force likes close mutually supporting formations and strict battle procedures, all of which makes sense if your entire military industry is based on fighting a technologically superior enemy that you have to overwhelm with firepower. Colonial fleet on the other hand gives its commanders considerable latitude and expects them to exercise tactical initiative. Both systems have their benefits and draw backs.

Also the FTL methods of these two fleets are vastly different but grant a similar advantage, the ability to circumvent enemy forces and perform flank or rear attacks. It was interesting to watch both sides effectively try to perform the same maneuver.

I would like to thank Will and Adam for an enjoyable and tactical game.