Skip to main content
Labels
Posted by Man For All Seasons September 09, 2019

Good day everyone. Over the last three months I have been adapting to having a very small but growing person in my life and my model painting has had to adapt as well. I am now finding, for the time being at least, it to be easier to attack smaller portions of projects. In this line of thinking I have of late painted quite a few fighter models for three of my collections. These are small, relatively quick to finish, and have the added bonus of getting some lingering bits out of my way. 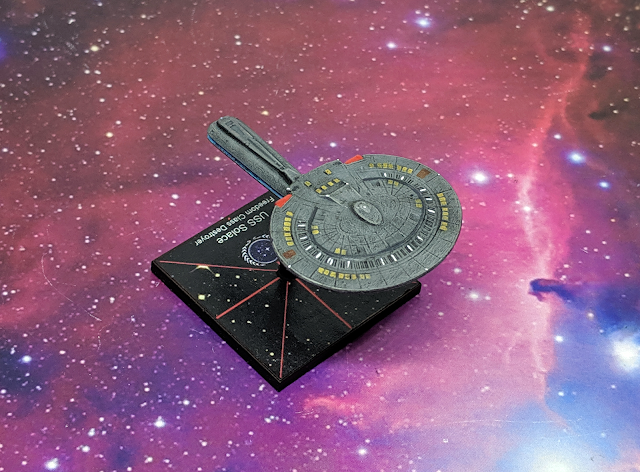 First up, though not the first of the following models painted, is the USS Solace, a Freedom Class Destroyer. The Freedom Class is an ugly ship that was only seen in the debris scene from Best of Both Worlds. I enjoy getting a few of the one-off ships for my Starfleet force such that it is not all just Mirandas and Excelsiors.

The Freedom Class model can be found here. 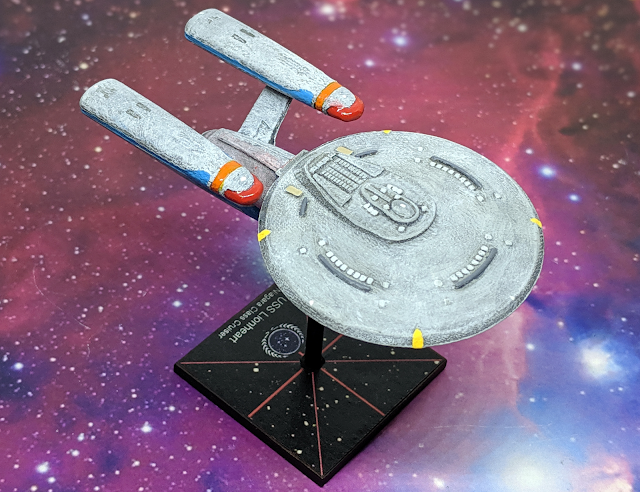 If you thought the Freedom was ugly, let me introduce you to the USS Lionheart, Niagara Class Fast Cruiser. This three nacelled monstrosity (the third nacelle is hidden by the secondary hull at this angle) is one of my favorite Starfleet ships, though I am not entirely sure why. This model is not up to the quality of the rest of my fleet but it is the best quality I have found in 1/7000 scale.

The Niagara Class model can be found here. 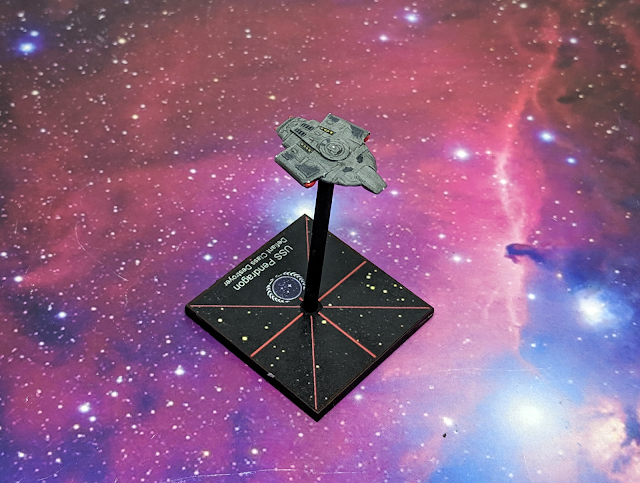 Until recently my Starfleet force included one Defiant Class, but that didn't feel like enough, so now I have two. The USS Pendragon joins the Hurricane and together they add some much needed firepower to the Space Coast Guard.

The Defiant Class model can be found here. 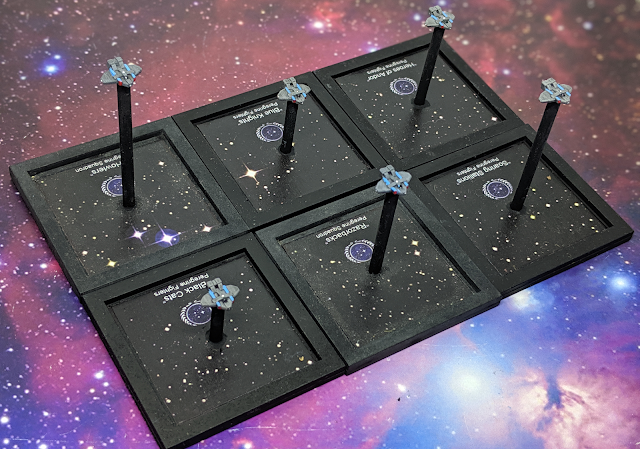 I have had a few Starfleet small craft models laying about for the better part of a year and they desperately needed to get finished. So one day I pulled them out and got around to doing them. The strike portion of the small craft are six Peregrine Class Fighters.

The Peregrine Class model can be found here. 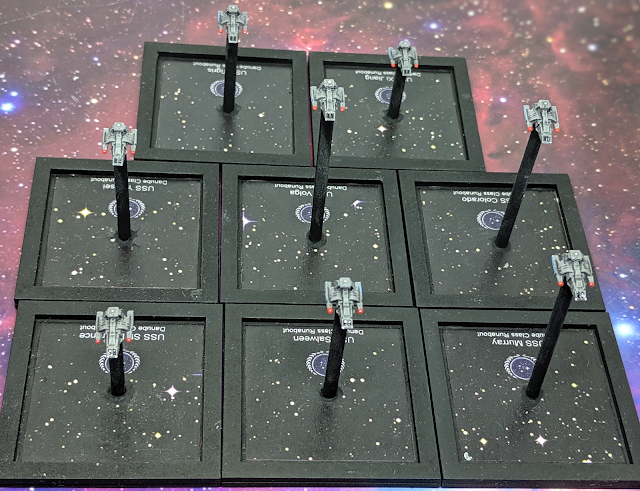 Next up are Danube Class Runabouts. These are gorgeous little models that were honestly fun to paint. Why I needed eight of them I don't know.

The Danube Class model can be found here. 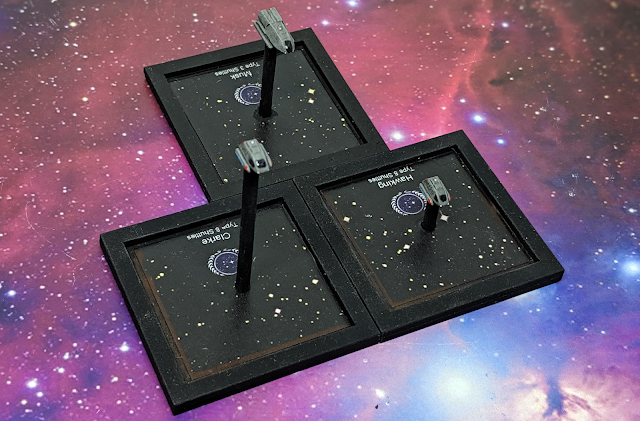 My ultimate goal is to have a number of shuttles for players to use with Starfleet when facing the likes of Battlestar or Star Wars. As a test I ordered two Type-8 and one Type-3 shuttle. The models are excellent and I plan on buying many more.

These shuttle models can be found here. 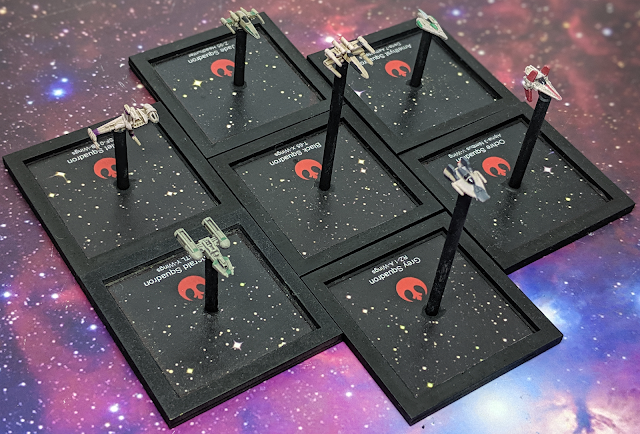 I currently have two fishing tackle trays loaded with Rebel and Imperial fighters and when I get the urge to paint some I grab a couple of unique or rare fighters and a handful of standard models to fill out the fleet. This group was no different; I feelt like painting a Delta-7 Aethersprite and an Alpha-3 Nimbus V-Wing. To fill out the fleet I grabbed one of each of an X-Wing, Y-Wing, B-Wing, A-Wing, and Z-95 Headhunter. The X-Wing, B-Wing, A-Wing, and Y-Wing are all Star Wars: Armada models.

The Z-95 Headhunter model can be found here.

The Delta-7 Aethersprite model can be found here.

The Alpha-3 Nimbus V-Wing model can be found here. 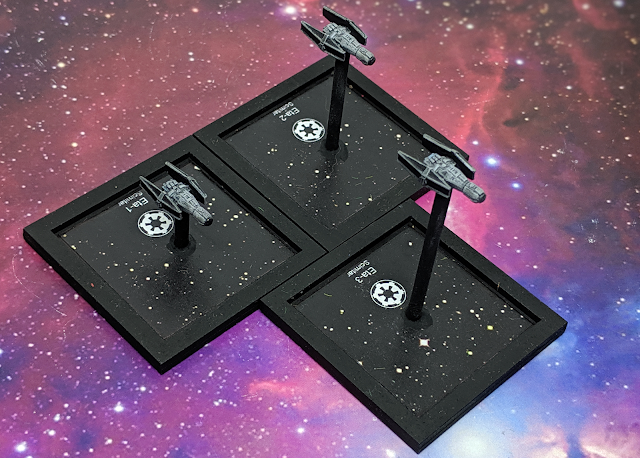 From my Imperial box I pulled three Scimitar bombers. These are a rare fighter but provide a nice change from TIE bombers.

The Scimitar model can be found here. 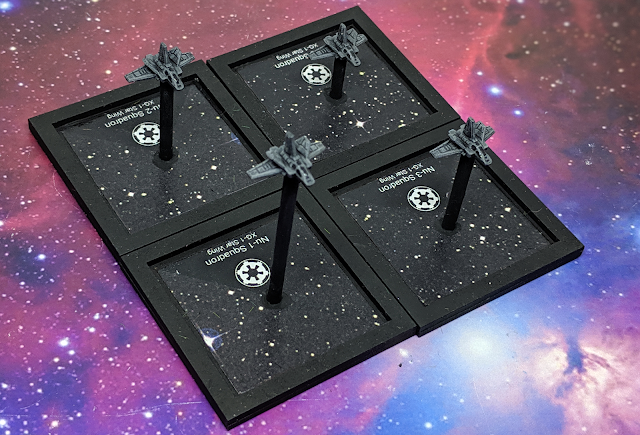 Next I grabbed four more XG-1 Star Wings to join the two I already have. I always wanted this ship as it was my favorite in the X-Wing and TIE Fighter series games.

The XG-1 Star Wing model can be found here. 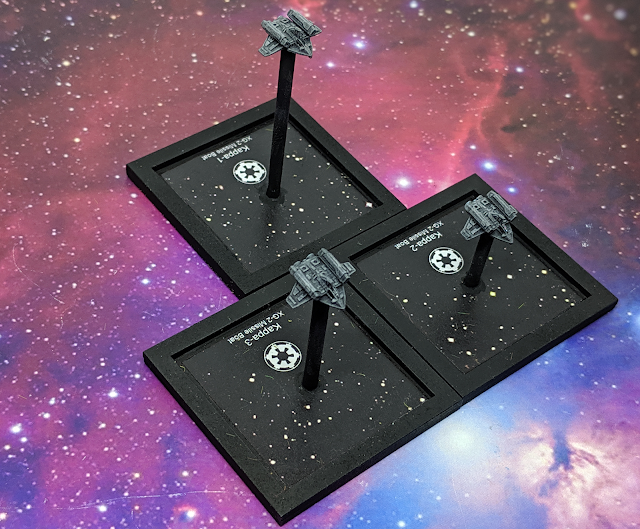 Another product of those video games was the Missile Boat. This is a truly ridiculous craft that probably won't get used much, but as with any of my "bespoke" projects I have to have everything.

The Missile Boat model can be found here. 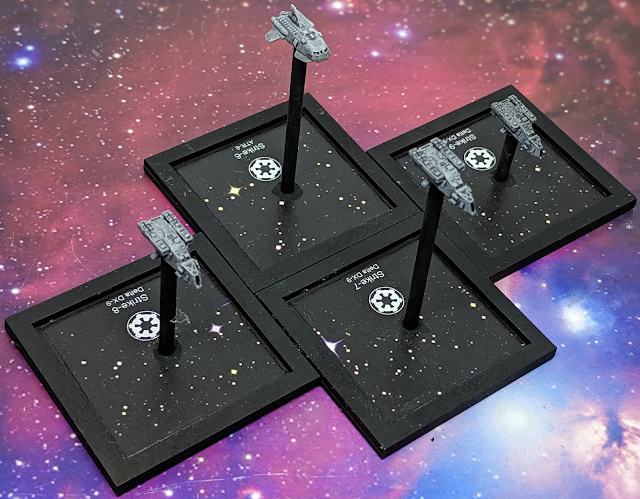 Digging through my box I discovered that I had some left-over assault shuttles, specifically one ATR-6 and three Delta DX-9s. With these completed I have three and six respectively. I can now effectively board me some Rebel ships.

The ATR-6 model can be found here.

The Delta DX-9 model can be found here. 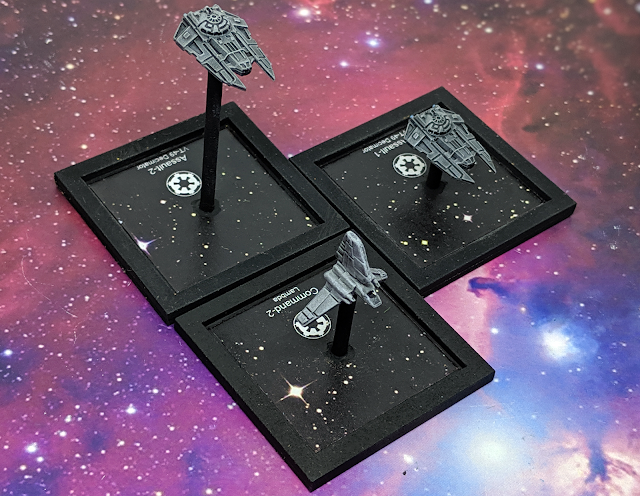 For heavy support I grabbed two VT-49 Decimators and my last Lambda Class Shuttle. I'm not sure how much use I will get out of the Lambda but at least its not in my box anymore. Both of these models are Star Wars: Armada models. 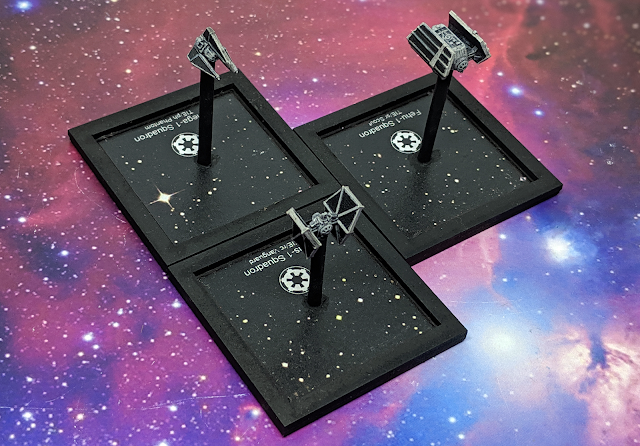 Lastly, for truly unique items I pulled out a TIE/Rc Vanguard scout fighter, a TIE/Sr Scout, and a TIE/Ph Phantom cloak fighter. The scouts will get much more play time than the phantom, but the phantom is cool as hell. The phantom is a Star Wars: Armada model.

The TIE/Rc Vanguard model can be found here.

The TIE/Sr Scout model can be found here.

That's everything for now. Sitting on my desk at the moment are some warships of the Imperium from W40K. This again represents reaching into my boxes and seeing what comes out.
Email Post
Labels: Star Trek Star Wars Starships