Skip to main content
Labels
Posted by Man For All Seasons April 19, 2020

Good morning readers. The Ado Sector Campaign I ran recently came to a close with an explosive ending putting a stop on the Star Wars fun. [Read about that campaign here] Not wanting to sit idle, I put together a Star Trek campaign and invited a different group of friends to participate, as much to spread around the fun as to see different personalities at play.

Both my and my friend Adam's Star Trek collections are geared towards the Dominion War with a host of modern ships, though not without a horde of older designs. However, I did not want to do the Dominion War proper as it is both a much more complicated environment than I want to tackle at the moment and I have a plan to run such a campaign when we are able to once again be in each other's presence.

All the relevant models for the campaign from both Adam's and my collections.

Instead I chose to model the Federation-Klingon conflict over the Archanis sector in 2372-2373. For any unfamiliar with this conflict, this Memory Alpha article should get you up to speed. This conflict is much easier to model as it is a more contained space, has only two sides, and lasted just six months. This also had the benefit of utilizing two of our more extensive collections, Starfleet and the KDF.

Drawing on the experiences of the Ado Sector Campaign recently concluded, I devised a new set of rules to govern play. Certain elements of the previous campaign proved to be clunky or often inadequate for the imaginations/machinations of the players. Also, Star Trek is a very different environment than Star Wars.

I have always held to the idea that Star Wars is a much more complex tactical environment with many interacting pieces, much like naval warfare in the pacific theater of WWII. Star Trek by comparison, while my preference in terms of narrative fiction, is relatively simple tactically, resembling aerial combat. Developing this campaign I realized that it isn't that simple. While Star Wars offers a complex tactical environment, operationally and strategically it is less so. Combat in Star Trek is, by comparison, very simple, but strategically it is much more detailed than Star Wars.

This came about as I was grappling with modelling starships with real-time FTL sensors that reach out much beyond their movement ranges in a reasonable time frame that function even while travelling at warp. This creates a witches-brew of action-reaction-counter action as starships can see each other as they are moving across great distances and can intercept and flee from each other. Breaking the campaign down into turns of discrete time does little to alleviate the headache. And I haven't even mentioned combat while at warp. Star Wars, you just jump point to point and fight.

But I managed to do it, at least sort of. 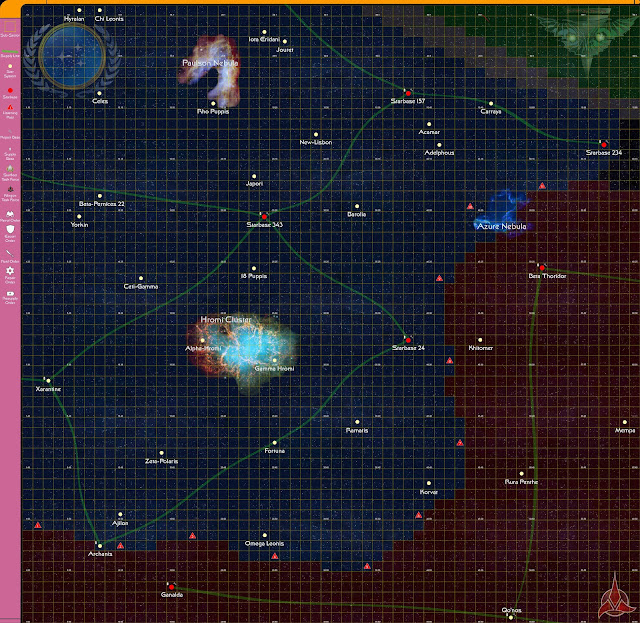 The map of the campaign showing a 60x60 light year area around the Federation-Klingon border. In its normal format this image is quite large, built with hundreds of layers in Photoshop, so large I couldn't post it on the blog. Apologies for the lower quality image.

The Archanis Campaign is a map game whereby three players will vie for control of the hotly contested Archanis Sector and the surrounding space in 2372-2373. One player will take control of Starfleet’s forces in the area and desperately attempt to halt the Klingon advance as the Federation re-tasks its spread out forces. The other two players will each adopt the role of the leader of a Great House tasked with the invasion of Federation space. One player will be House Antaak, the other House Korath. These two players are nominally working together, but as with all things Klingon, cooperation may be difficult.

Each turn, the three players will issue orders for their starships and task forces. There will be a number of orders a player can issue to any task force as well as a stance that task force can be set to. When the orders from each player have been received by the game master, the turn will be processed and each player’s files updated. Battles may occur as a result of the issued orders. These battles will be adjudicated by the game master with an assistant if possible. Each turn represents 72 hours. The campaign will last a maximum of 60 turns representing 6 months.

The two Klingon players will each have an Honor score. Their Honor will take into account the systems and starbases they have captured as well as Starfleet starships they have destroyed. The specific amount that any captured system or destroyed starship will affect Honor is not visible but can be roughly inferred through the importance of a system and the size and cost of the destroyed starship. Their own losses are not included in their Honor. In the event of a loss for the Federation, the Klingon player with the greater Honor is considered the victor and a grand statue of them erected outside the Great Hall. In the event of a Federation victory, the player with the greater Honor will not be stripped of all their lands and titles.

The map represents a 60ly by 60ly expanse of space along the Klingon-Federation border with the Romulan Star Empire present at the coreward edge. A grid of 60x60 squares lies across the map denoting sub-sectors of 1ly by 1ly. A coordinate system exists to aid in the issuing of orders with a two number system. The first number is the column and the second number the row. Only every fifth sub-sector is labeled to avoid crowding the map.

Federation territory is colored blue, Klingon territory red, Romulan territory green, the Romulan Neutral Zone grey, and unclaimed space clear. Notable star systems are shown with a yellow star icon and the name of the system next to it. Starbases are denoted with a red circle. Neither side may enter the Romulan Neutral Zone or Romulan territory. Starfleet has not been authorized to enter Klingon space by the Federation Council at this time. Eleven watchtower listening posts along the Klingon border are represented with a red triangle. Three nebulas exist on the map, the Paulson Nebula, Azure Nebula, and Hromi Cluster, and are given a graphic. A sub-sector is considered to be nebula if at least half of it is filled by the nebula. 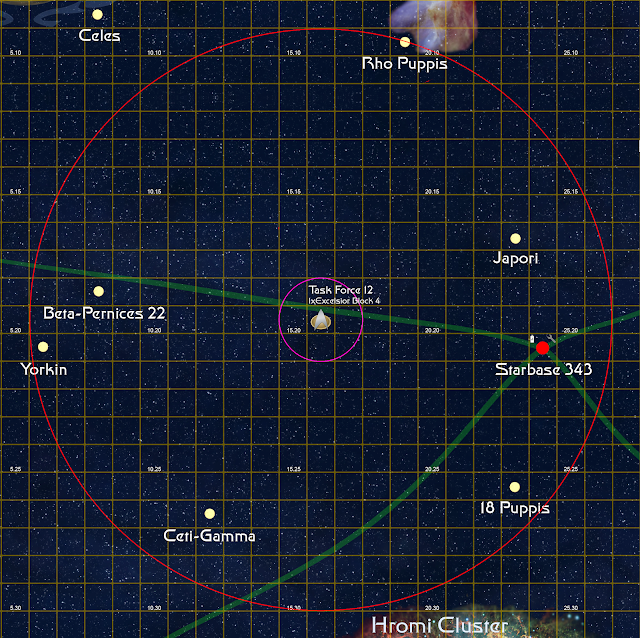 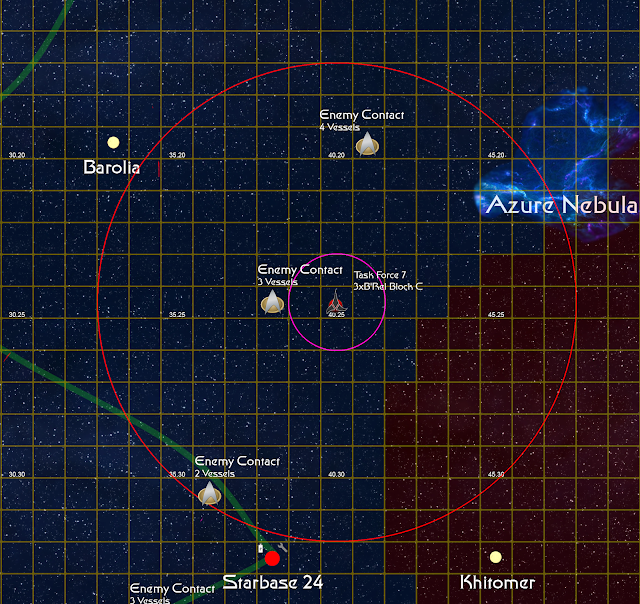 The systems containing supply bases automatically replenish their supply capability each turn assuming an uninterrupted route can be traced through the supply lines off the map. If a supply base cannot do this, its supply inventory is not replenished and therefore finite until such time as the supply line is restored.

A starship with a supply rating of zero is only capable of a move, resupply, or repair order and if forced into battle cannot utilize any on-board torpedo tubes and phasers/disrupters hit with ½ their normal damage (rounded down).

Both Klingon players have the ability to establish a new supply base in a Federation system that has been the target of a successful Invade order. This supply base will create a supply line back to the player’s primary supply base. Each Klingon player may only do this once.

Task forces can be given any number of orders to accomplish the player’s goals. Only one order can be issued to a task force even if not all the starships contained within it are required or capable of performing the order, i.e. a task force cannot be ordered to move to a system and invade it in the same turn. Whether task forces encounter each other or are able to intercept one another will be determined by the game master taking into account how much each task force has moved that turn and the relative speeds of the starships.

Move: A task force issued a move order must be given a destination within 3 sub-sectors of its current location. A move of 3 sub-sectors is equivalent to Warp 6. A starship can tow another starship up to twice its size (Mass Factor) with its tractor beams on a move order if required. Enemy starships will only be engaged if the move brings them into the same sub-sector. Corner-to-corner moves are not permitted.

Patrol: A task force issued a patrol order will attempt to engage enemy forces detected within their max cruise warp range within the limit of it’s stance. A task force that engages an enemy task force will expend one supply rating from each of its starships for the move and one supply if they enter combat.

Raid: A task force issued a raid order must be within 1 sub-sector of an enemy supply line. The constituent starships will intercept and destroy or capture enemy supply vessels travelling this route, although this is abstracted. The supply route will be considered compromised by the enemy. Any starships conducting a raid order can replenish their supply rating by one at the end of the turn.

Task forces must have one of three stances which indicates their willingness to engage enemy forces.

Evasive: A task force set to evasive will always attempt to flee in the face of enemy vessels.

Aggressive: A task force set to aggressive will attempt to combat enemy forces of ~equal combat capability or smaller. 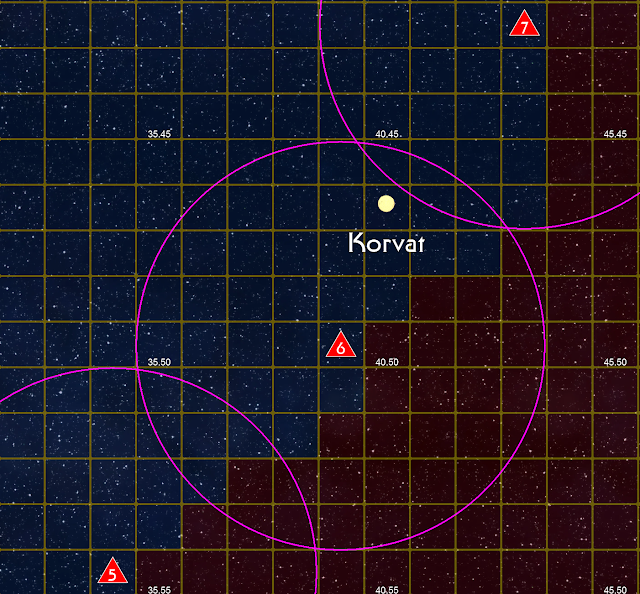 Some of the starships under a player’s command will have a flag rank officer aboard. Rear Admirals are one command die, Vice Admirals two command dice, and Admirals three command dice. Each flag rank officer will have a rating of Poor (D4), Average (D6), or Brilliant (D8). When one or more of these commander’s are present in a task force and that task force participates in a battle, a proper chain of command will be established. If no flag rank officers are present at a battle, the captain of the starship with tactical superiority will command the fleet as a single D4 commander with all present starships reporting directly to them.

The setup and deployment zones for a battle will be determined by the approach vectors of the participating starships, i.e. a task force being engaged by two enemy task forces from two different vectors would likely fight a flank attack scenario. Reserves will be available in most battles at the discretion of the game master.

Occasionally with one task force on a patrol order and its target at an evasive stance, warp combat may occur. For the purposes of the campaign, only a stern chase will be modeled. This will occur when one task force is being pursued by another task force of a higher max warp cruise speed and the choice is made not to drop to sub-light for combat. The two forces are deployed 300cm apart with the pursuing force facing the stern of the evading force. There is no plotting or movement as this is mostly a mathematical exercise and could be done on paper.

Only torpedo launchers will function for the battle. The evading force’s torpedo launchers range bands are doubled for the battle to represent the massive closing speed any torpedo fired would have. The evading force may only utilize aft facing weapons. The pursuing force may only utilize bow facing weapons.

These are the constraints the three players are operating under. There are a number of things they are not privy to such as the specific mechanics of reinforcements and detecting cloaked starships. This is mostly to maintain some level of mystery and avoid gaming of mechanics.

The campaign has already progressed to turn six and I have four small skirmish battles ready to go for a deployment. A post detailing the first few turns will be coming soon. Stay safe everyone.