Skip to main content
Labels
Posted by Man For All Seasons October 09, 2020

Good morning space cadets. Followers of my blog will be aware that I have a moderate Battlestar Galactica collection covering the first and second Cylon Wars in 1/21,000 scale. These models have served me well for many years. However, the particular dragon that I chase is one of consistent scale. The scale I prefer is 1/7000 and my efforts over the years have resulted in my Star Trek, Star Wars, and Stargate collections being in this scale.

I have a particular affinity for playing cross-over games and having models in scale with each other enhances the experience; at least to me it does. Seeing a star destroyer flying with the Enterprise in proper scale adds a certain gravitas to the monster Imperial ship.

Until recently, my efforts to unify the scale of my collections has encountered difficulties when it comes to BSG and Babylon 5. Availability of models and the consistently large size of starships in these universes has been the main impediments. Now that home 3D printing has advanced to the point where I can achieve the high detail I require, the situation is resolving itself. 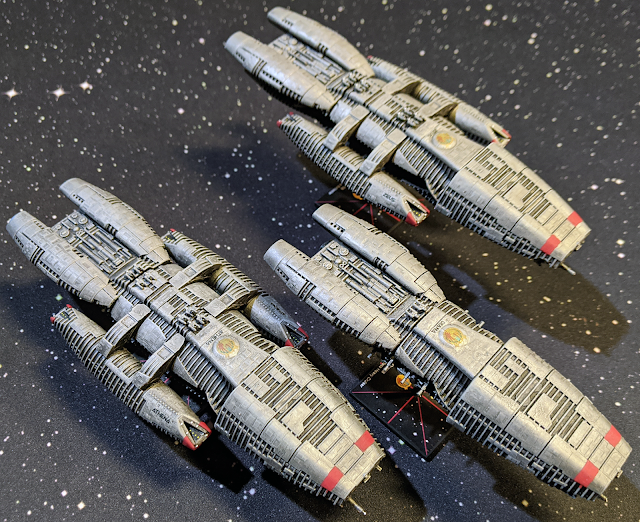 Utilizing my friend Adam's printer we have begun this journey with a Columbia Class Battlestar. Adam of course took ownership of the first model printed and then I quickly ordered two more from him. In addition, he granted me a failed print to see if I could do anything with it, which indeed I did. Some careful construction and kit bashing later I created a custom cruiser. 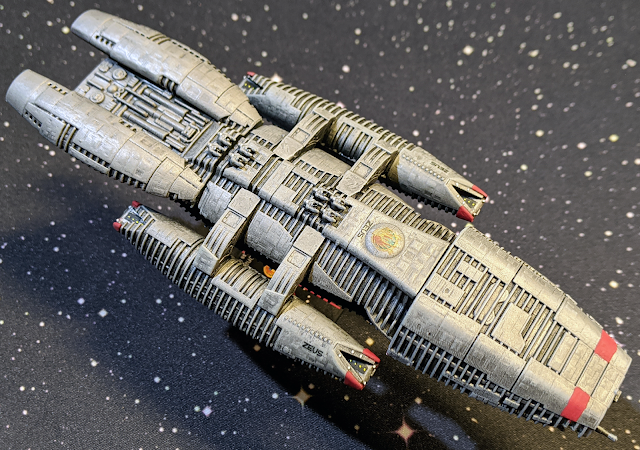 The first battlestar is the Zeus. As is evident in this shot, the detail level of the model is up to the standard I expect from my models. My specificity and retentiveness with models comes not just from a desire to have the best quality I can, but also because the higher the detail the better painted result I can achieve and frankly because high detail accurate models are a joy to paint. 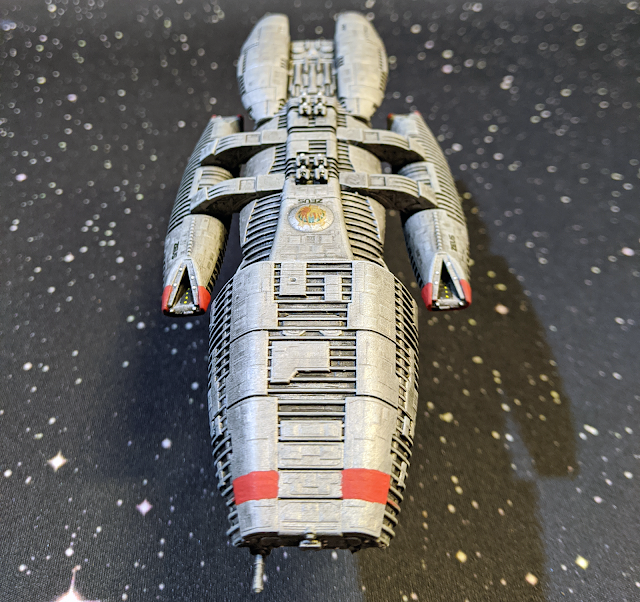 The challenge with painting BSG models is the hull coloring. Adam and I have had a multi year "discussion" as to the appropriate look of a battlestar's hull. Essentially the divisive point was, are battlestar hulls metallic or grey? With these models I put the effort in to achieving as close to the correct look as possible and I believe I got there. The Zeus' hull appears both metallic and battleship grey at the same time. 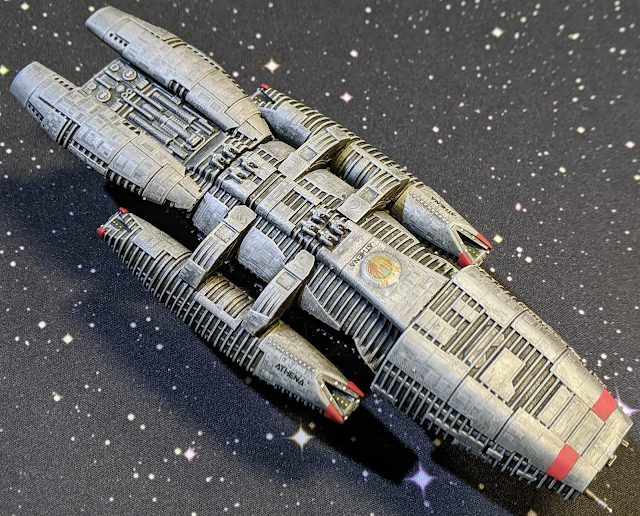 The second battlestar to join the fleet is the Athena. With all three models in a large scale I was presented with the problem of the names on the hull and the Twelve Colonies crest on the spine. In the smaller scale I have crudely painted the crest on and skipped the names. For these I did some leg work and acquired decal paper compatible with the laserjet printer in my home. A quick bit of measuring, photoshopping, and printing later, the models had their names and crests. The only lingering issue is that the names on a battlestar are in white while these decals are in black. I did contemplate using the decals as a template and painting over the letters but the letters are 2mm high, so not happening!

As with most of my models I put a little effort into the engine glow. I find that since most starships are fairly boring color scheme wise (notable exceptions exist such as the Narn from Babylon 5) as a painter I am obliged to find ways to add pizzaz. Engine glows are one way to achieve this as are running lights and window lights. The Diana is a cruiser of my own design utilizing parts from a failed print of a Columbia. The hull of the model had numerous raised nodules and a graininess that required extensive sanding and fixing. With that complete I chopped the core hull down and joined the sections together. Where the flight pods normally rest during FTL jumps I utilized the turrets from 6mm Roland II air defence vehicles from my bits box to emplace missile turrets. Under the 'chin' of the model I replaced the two forward turrets with heavier mounts. These turrets were in my bits box but I could not tell you where they came from if I tried. 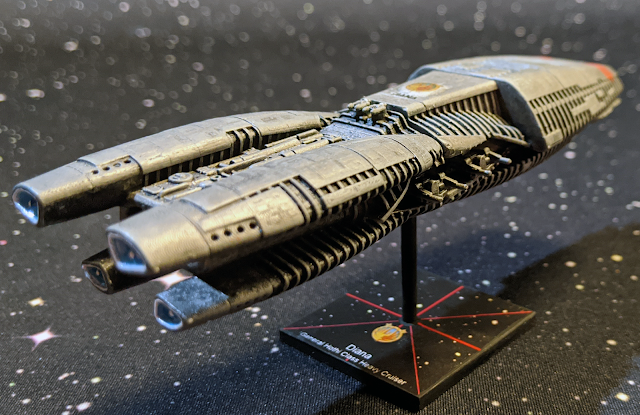 After completing the model I designed the stats for her in Metamaker, the starship design software for Metaverse 2. The turrets in her port and starboard trenches are multi-shot missile weapons similar to the ones found on the Valkyrie. The heavy turrets under her 'chin' are high velocity penetrators similar to the forward guns on a Mercury. Finally I designated her a General Hothi Class Heavy Cruiser. 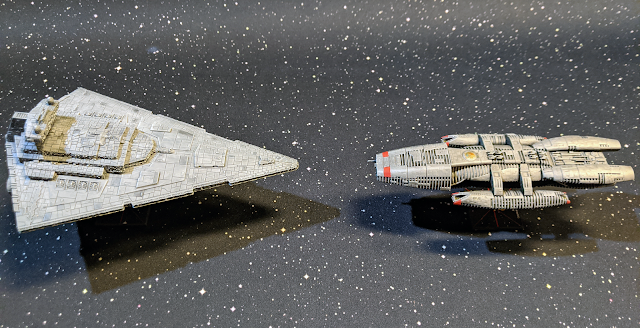 Only when you put a 1/7000 battlestar on the table do you begin to understand just how big these monsters really are. Until this point myself and other players had to imagine the immensity as my current fleet is 1/3 the scale.

Being a lifelong Star Trek fan I always imagined the Sovereign Class as a big ship; not so much anymore.

I have plans to continue to expand on this collection with the next acquisitions hopefully being a Mercury and a couple Valkyries. Then we'll see what else I can get my hands on. Eventually I hope to retire my smaller scale models entirely. Then it'll be on to Babylon 5 in 1/7000, a much bigger ask.

The rules I use, Metaverse, can be found here.