Skip to main content
Labels
Posted by Man For All Seasons October 23, 2020

State of the Fleet - Galactic Empire

Good evening everyone. I am in the middle of sorting through a large set of 3D printed Starfleet models I received recently and am setting up an order of Star Wars models. In the process of working out said order I realized that my two fleets have reached 50% or more of their intended composition. In celebration of that achievement I have catalogued the current state of the Imperial fleet. There are many models missing as well as a good portion of the existing models requiring a rebase to my version 3 standard but I still believe this is an impressive sight. 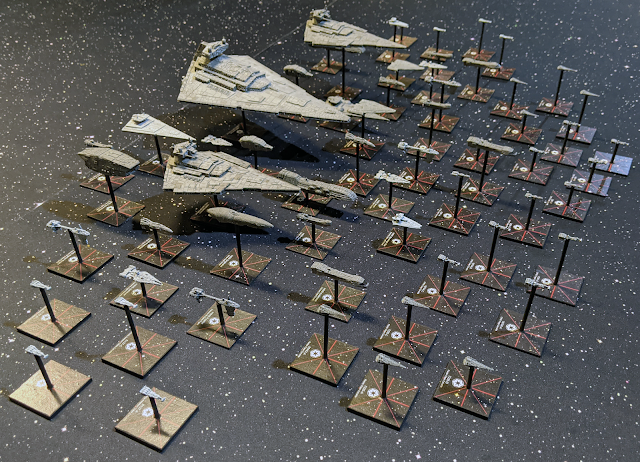 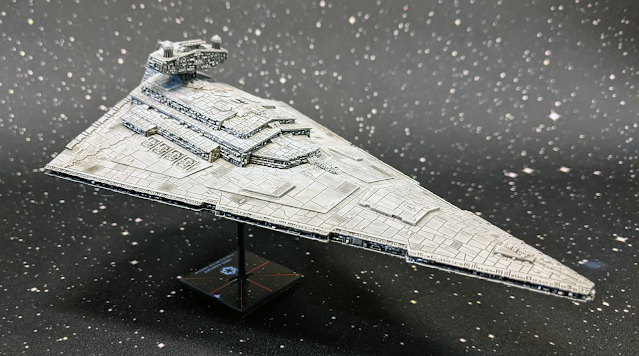 The flagship of the 12th Battle Squadron is the HIMS Adamant, a Mk II Imperial Class Star Destroyer. 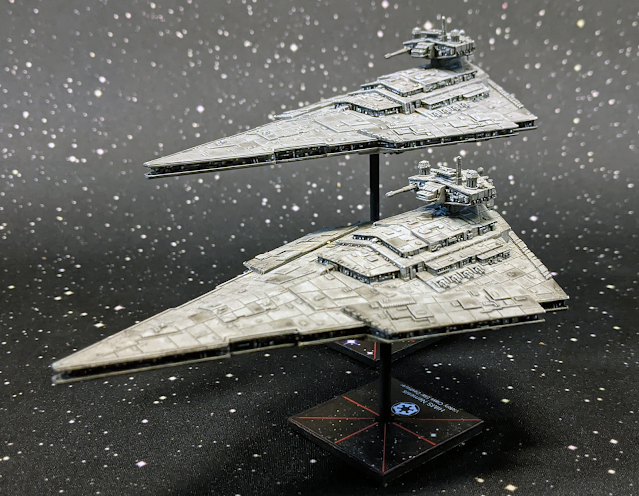 The HIMS Nemesis and Titan, Mk II Victory Class Star Destroyers, each command one of the squadron's Heavy Attack Lines. 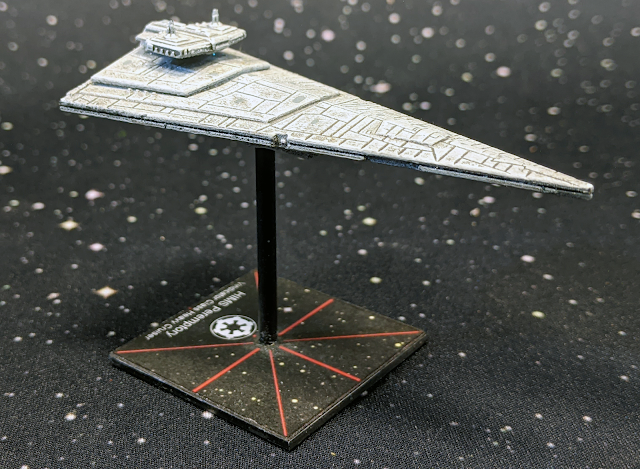 The Pursuit Line of the 12th Battle Squadron is led by the HIMS Peremptory, a Mark II Vindicator Class Heavy Cruiser. [Rebasing Required] 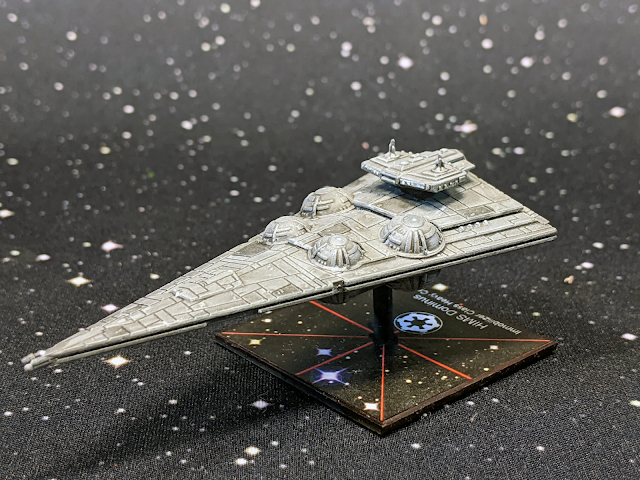 Attach posted to the Capture Group of the 12th Battle Squadron is the HIMS Dominus, an Immobilizer Class Heavy Cruiser. [Rebasing Required] 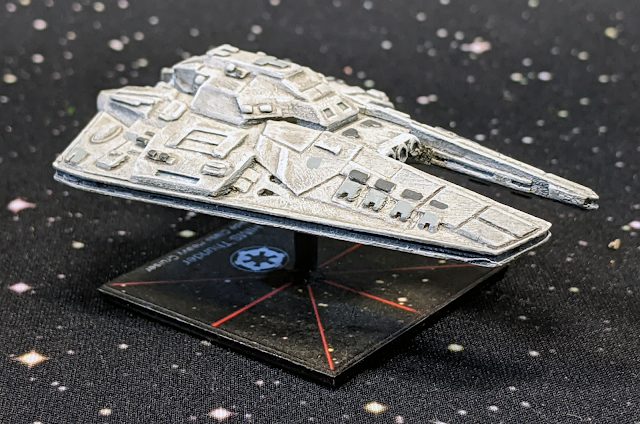 HIMS Thunder serves in the 1st Group of the 2nd Heavy Attack Line and is the only Broadside Class Heavy Cruiser in the squadron. [Rebasing Required] 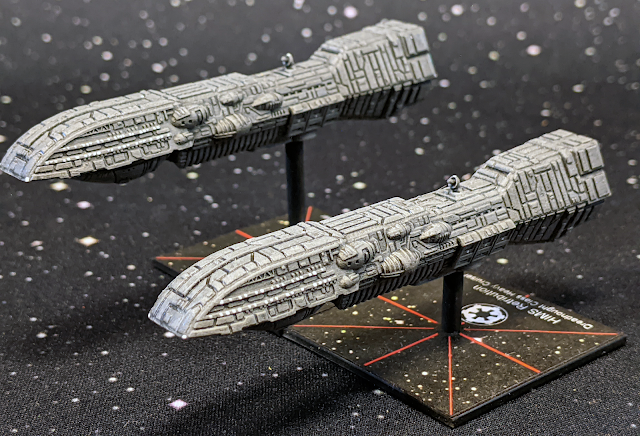 The 1st Group of the 1st Heavy Attack Line is entirely composed of Mark II Dreadnought Class Heavy Cruisers, two of which are the HIMS Apocalypse and Retribution. [Rebasing Required] 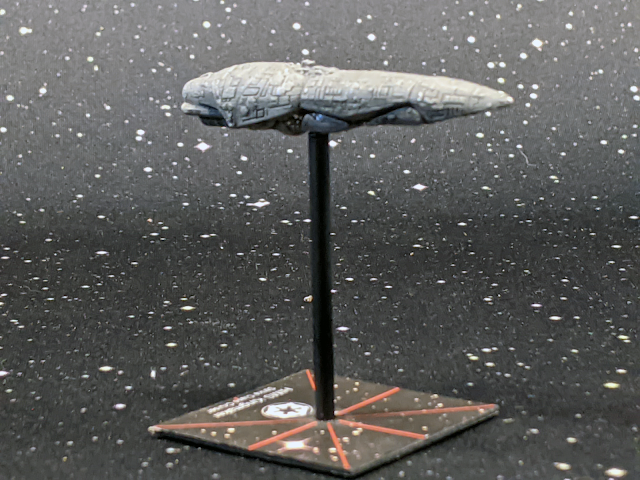 The 2nd Group of the 1st Heavy Attack Line contains three Strike Cruisers, one of which is the HIMS Kingmaker. [Rebasing Required] 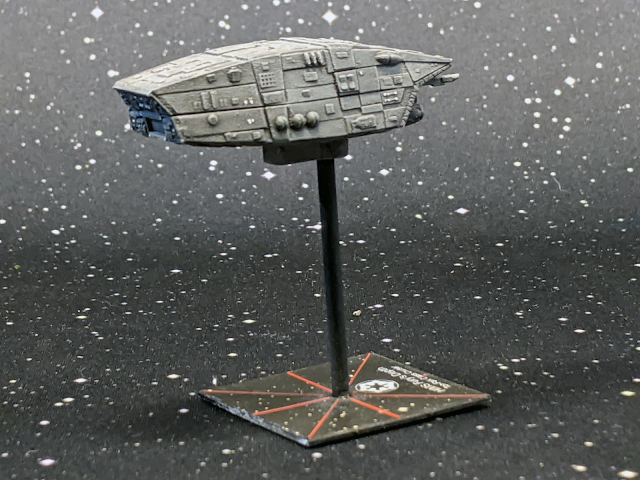 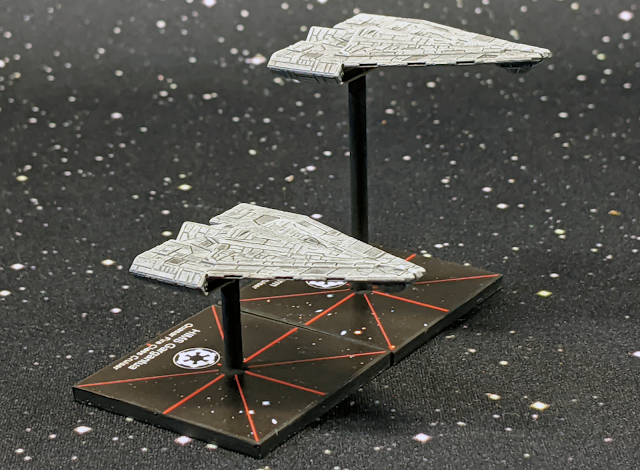 In addition to the Ton-Falks, Quasar Fire Class Carriers are also embedded in the squadron; the HIMS Polearm supports the flagship while the Gargantua supports the 1st Heavy Attack Line. 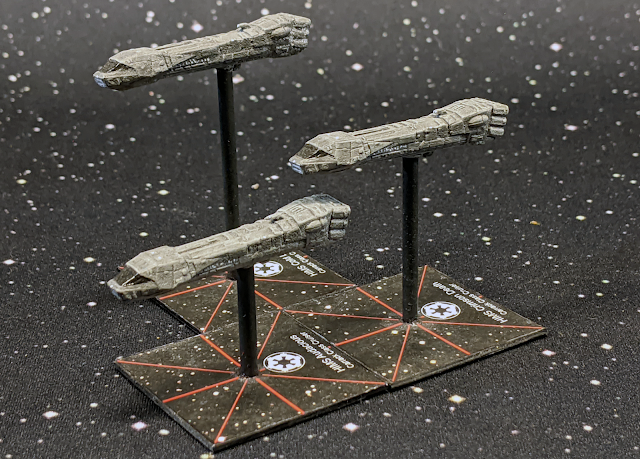 The primary firepower of the 1st Attack Line is provided by Carrack Class Cruisers; the HIMS Audacious, Crimson Death, and Cold Light form the 1st Group of the line. [Rebasing Required] 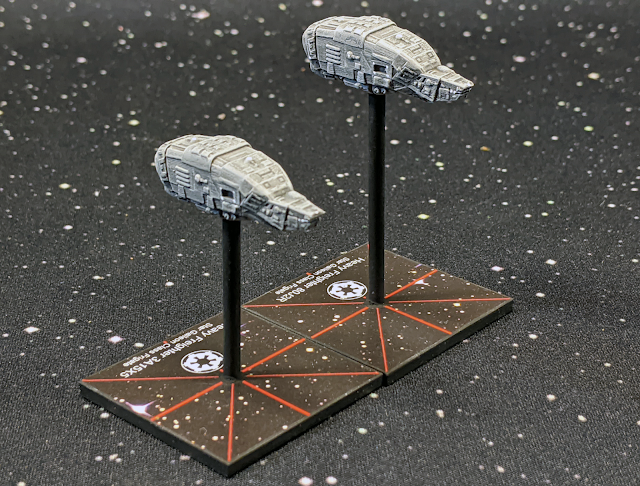 The logistical needs of the 12th Battle Squadron are provided by 80J2R and 3A15X5, Star Galleon Class Frigates. 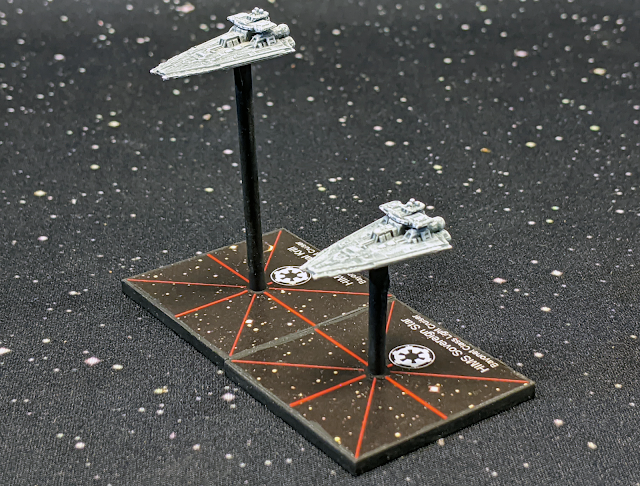 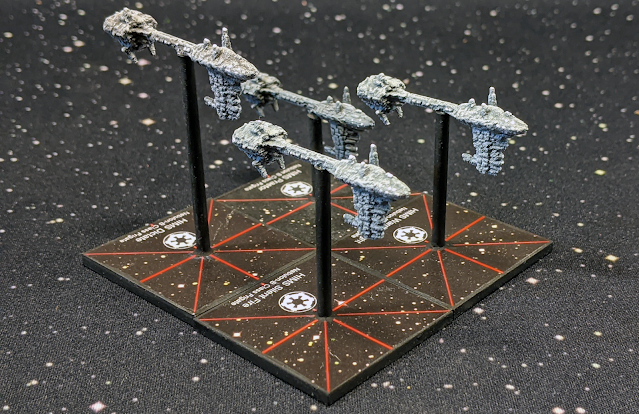 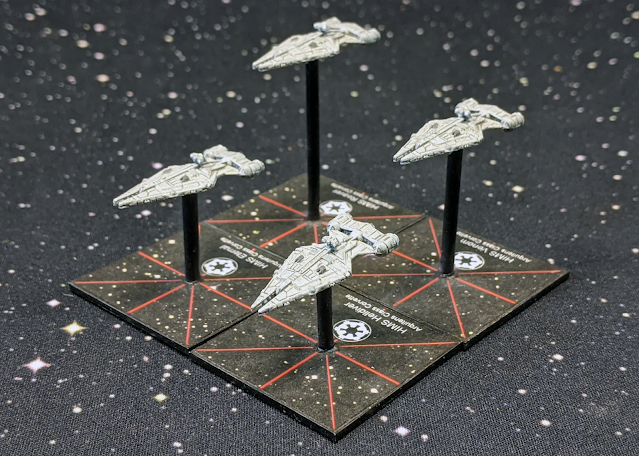 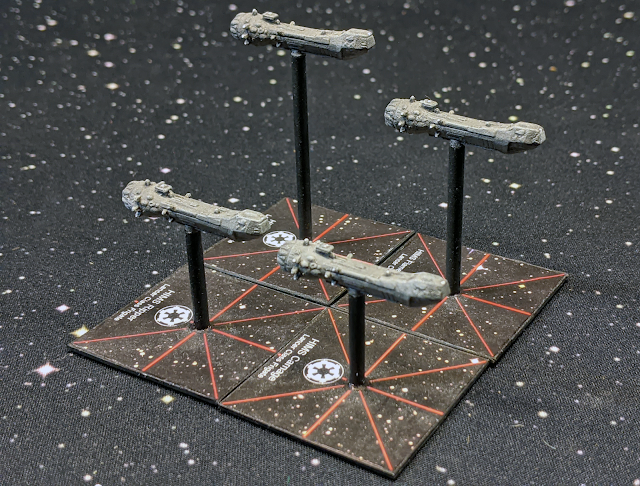 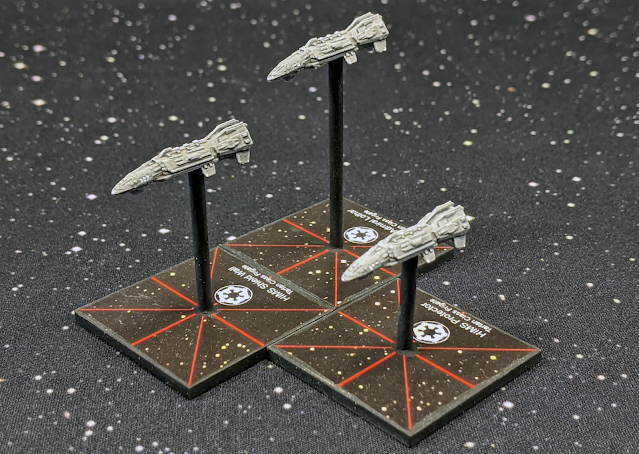 Performing much the same job as the Lancers, the Tartan Class Frigates HIMS Protector, Shield Wall, and Admiral Lothar defend against Rebel starfighters. 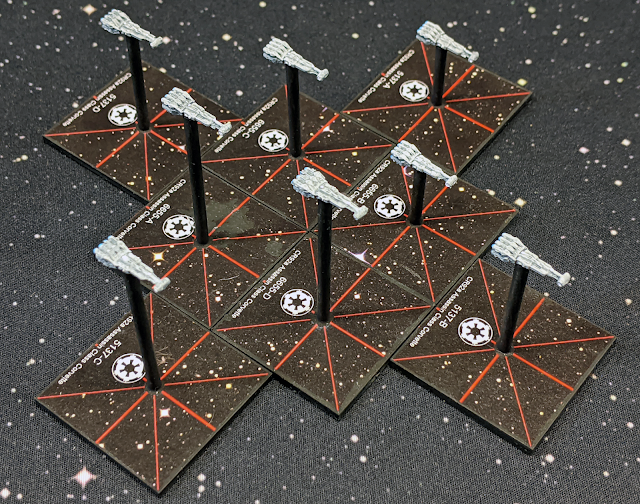 Two groups of CR-92 Assassin Class Corvettes, Sqn 6655 and 5137, screen the squadron as part of the 1st and 2nd Skirmish Lines. 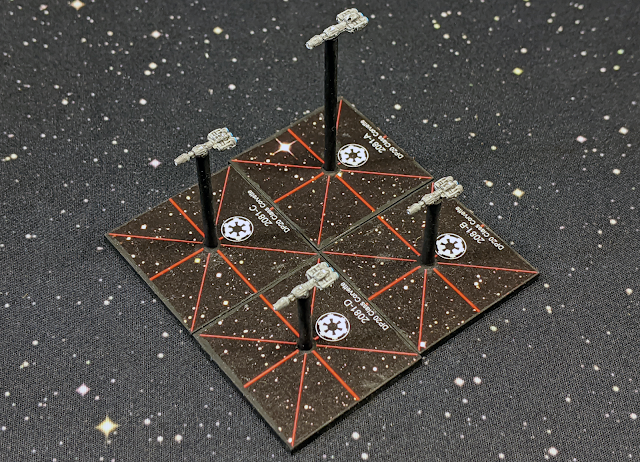 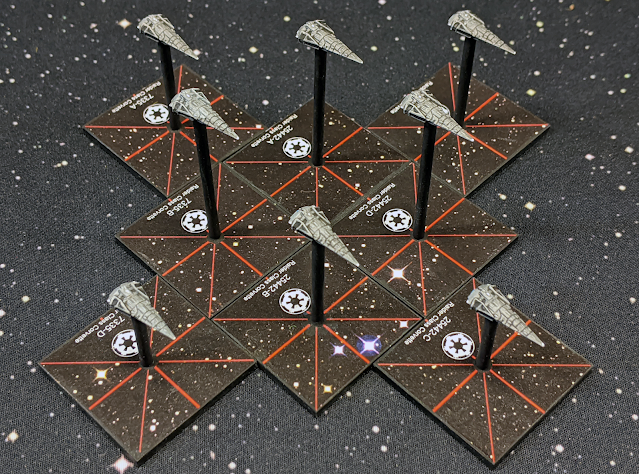 Sqns 7335 and 25442, composed of Raider Class Corvettes, screen the 1st Attack Line and the flagship of the 12th Battle Squadron. 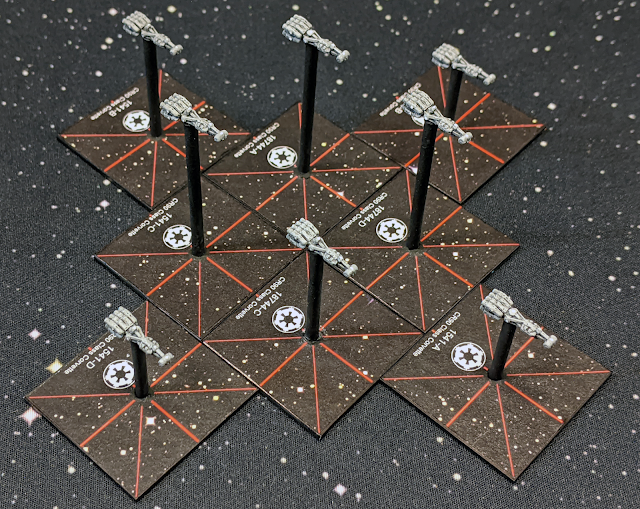 The 1st and 2nd Skirmish Lines each field a squadron of CR90 Class Corvettes, Sqns 18744 and 1541 respectively. [Rebasing Required]

That is everything I have painted thus far. My fleet list still requires some cruisers and frigates but the corvette and star destroyer weight classes are filled. On my desk at the moment are these: 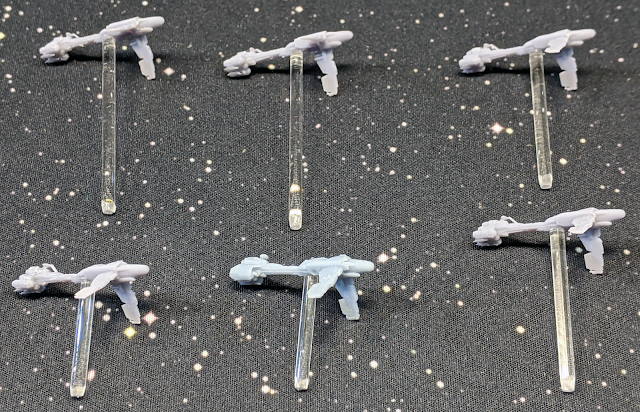