Skip to main content
Labels
Posted by Man For All Seasons June 10, 2017

Hello everyone, this past Friday my mates and I played a thoroughly silly game of Metaverse that proved to be both humorous and exciting. My friend Matt informed me that he would be passing through town on Friday evening and asked if I would be up for a game. Instead of just playing a sedate game for the two of us I decided to muster the troops and put on a monster of a game since Matt has been relegated to far off Ottawa for some time and I figured he would enjoy the socialization.

For this game I decided that I would gather as many gamers as possible and play a cross-universe free-for-all. I planned out 8 approximately equal value fleets from Star Trek, Star Wars, Battlestar Galactica, and Babylon 5. The accuracy of a mixing such as this is always in question but is a somewhat muted point as the intention of a game such as this is just to bring a group of gamers together, enjoy some beer, and create entertaining conversation. 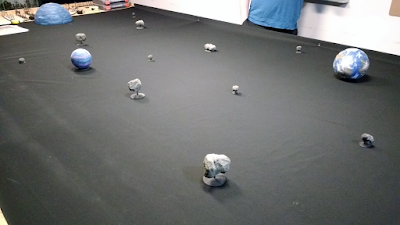 I setup a large table full of terrain including a gas giant, two major moons, and many minor moons and asteroids.

The fleets I designed are as follows: 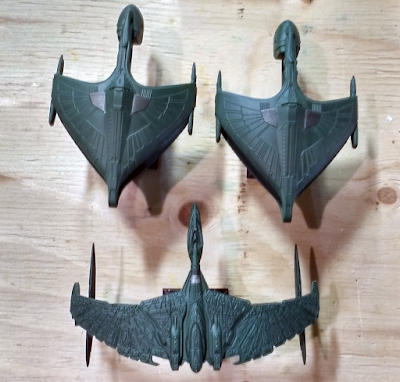 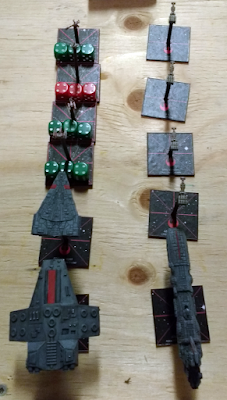 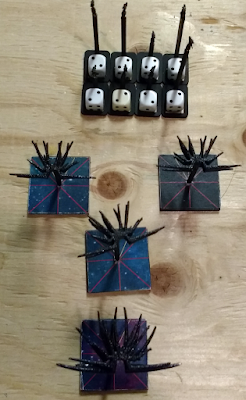 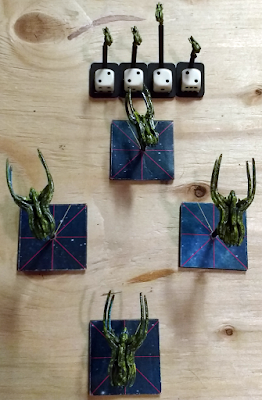 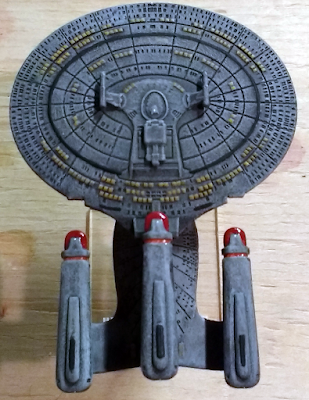 Players selected their fleets in the order in which they arrived at the game. Players then selected their starting locations in the reverse order. 7 players arrived (1 last minute cancellation) leaving the Vorlons unchosen. I selected the Rebels last (that Interdictor looked interesting) and chose a corner near the gas giant. 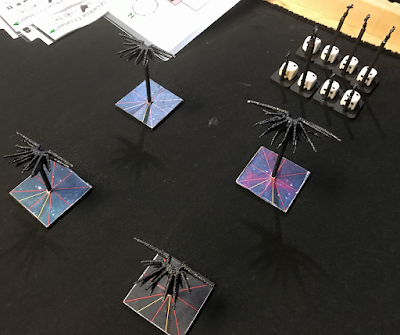 Matt chose the Shadows and selected the opposite corner from me declaring that he wanted to be far from the large collection of heavy fighters I was wielding. 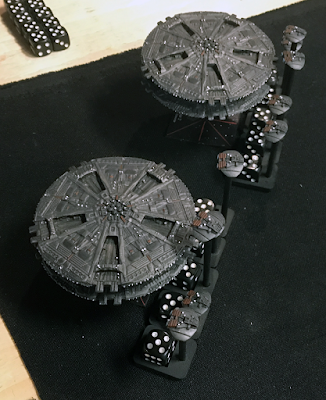 Simon chose the Cylons and picked the corner on the other side of the gas giant from me. 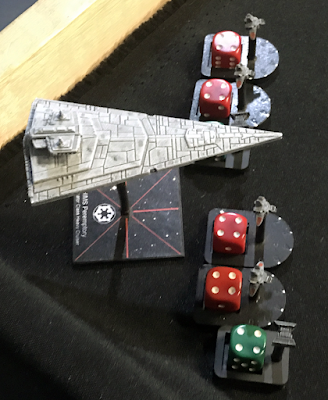 Lino chose the Imperials and selected the remaining corner at the Shadow's end of the table. 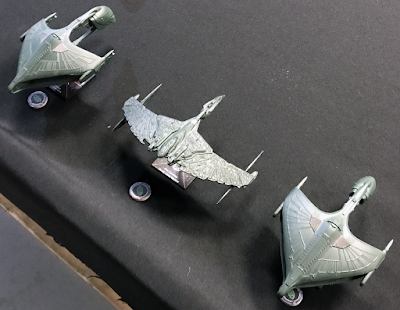 My lovely wife Melissa chose the Romulans and selected the middle of the table on the Rebel/Imperial side muttering something about being sneaky. 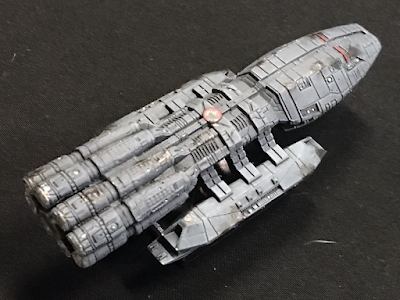 Anthony chose the Colonials and selected the middle of the table opposite the Romulans with the Cylons on his left and the Shadows on his right. 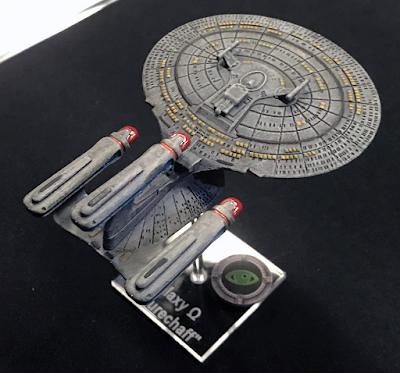 With a twinkle in his eye, Adam chose Starfleet and selected the middle of the table between the Shadows and the Colonials. For the first 30 minutes the only thing he could talk about was the certainty with which he was going to decloak and fire his phaser lance at something big. He did not specify a target during this rambling. 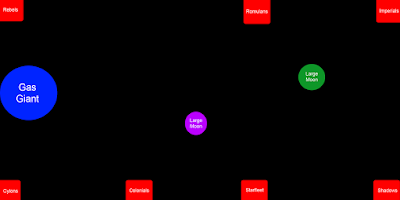 With the deployments complete the table looked like this. 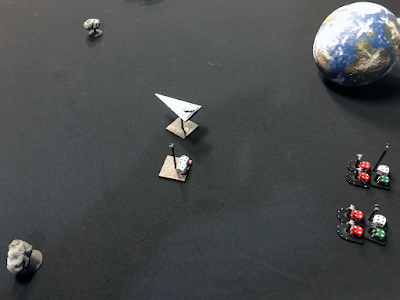 And thus the game began. The Imperials made their way towards the center of the table using one of the moons as cover against the Romulans and their port side facing the Shadows. 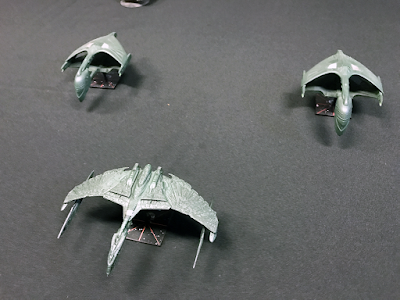 The Romulans confidently sailed across the table under cloak seemingly unaware that a battle was taking place. 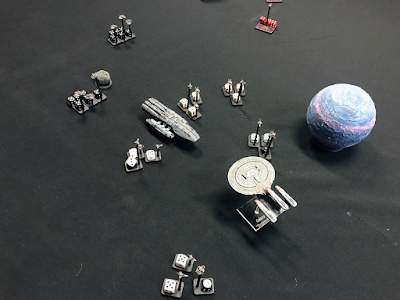 Starfleet turned towards the Colonial Battlestar apparently having selected the target for their "complex" decloak and fire plan. The Colonials disgorged their airwing and obliged the Starfleet ship by heading straight at it. Starfleet initiated the combat by decloaking and firing photon torpedos, quantum torpedos, phaser arrays, and the phaser lance. The Galaxy class utilized its impressive sensors and computers to perform a surgical strike with the phaser lance, knocking out the starboard launch tubes. Additional damage temporarily disabled the starboard flight pod's reactor. Undeterred the Mercury Class Battlestar unleashed every weapon in arc, including its Flak weapons and tore into the mighty Starfleet ship. Moments before this torrent of lead the Starfleet player was noted as saying that the Colonial use of kinetic weapons was adorable, he would soon eat his words. The weight of fire of the beastly Battlestar brought down the forward shields of the Galaxy Class and tore into the hull. The coup-de-grace came with the firing of the Mercury's forward heavy cannons which punched a hole straight into the engineering section and caused a fluctuation in the Galaxy's power grid. For precious seconds the Starfleet heavy hitter could not return fire. 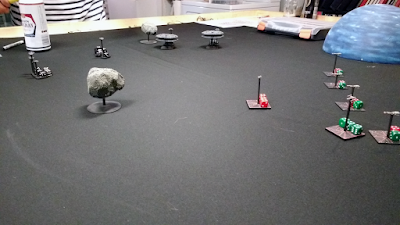 This impressive display of kinetic energy was the highlight of the first minutes of the battle. However, other developments were occurring across the table. Far behind the Battlestar, the Cylons had launched half of their raiders on strike missions while the Rebel corvettes accelerated towards the center of the battlespace with XWings, Y-Wings, and A-Wings flying with them. The B-Wings slowly sneaked towards the rear of the Cylon Basestars. 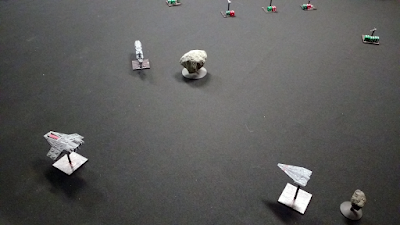 The Rebel capital ships turned down the length of the table hoping to extend their interdiction field over the majority of the battlespace. This would prevent the use of FTL drives over much of table, a serious hindrance to the Star Trek groups as their Warp Drives can be used tactically. 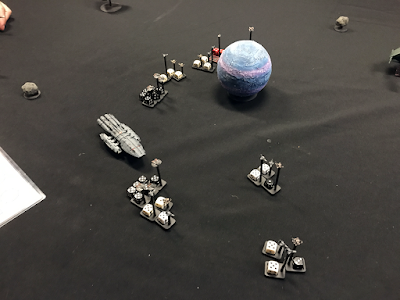 With her forward shields down, holes torn through her hull, and Colonial strike missions incoming, the Galaxy Class engaged her warp drive and performed a Strategic FTL Jump. This jump brought her outside the battlespace with the intention of re-entering on a later turn at a different point on the table. This left the Battlestar without an immediate opponent. Using the respite wisely, damage control teams went to work on the disabled systems. 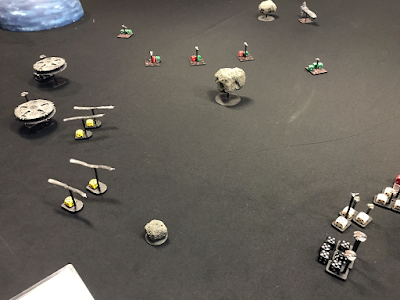 At this point it became clear that an unholy alliance had formed between the Colonials and Cylons (I mean really?) as the Cylons were in a perfect position to exploit the Battlestar's weakened state but chose not too. In response the Rebel Corvettes opened up fire on the Basestars. Turbolasers crossed the void and impacted on these massive vessels. The Rebel player was heard complaining profusely about the sheer size of his targets. In response the Cylons redirected some of their Raiders and began loosing missile salvos. 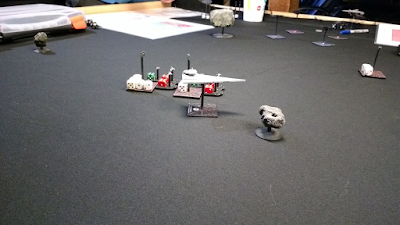 At the other end of the battlespace the Imperial Heavy Cruiser, still launching her fighter squadrons came under fire from the Shadows. Purple lances of death reached across space and impacted Rendilli designed shields. With her shields holding for the moment the Imperial ship chose to return fire not on the Shadow vessels themselves but on the Shadow fighters. Light Turbolaser batteries in Flak mode took down a portion of the Shadows fighter strength. As if pausing to consider the outcome of this battle, the Shadow ships seemed to hold their breath for a moment and then quickly recovered their fighters. A few eyebrows were raised at this move.

With the colossal amounts of energy being tossed around it seemed that everyone had forgotten about the Romulans. Still sailing under cloak, the three Warbirds appeared to be biding their time. Compliments to my Wife as she was roleplaying well! 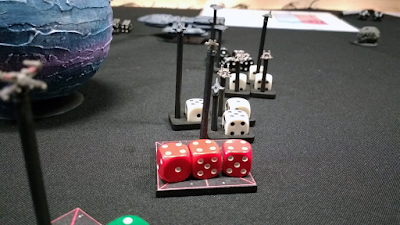 The Cylon-Rebel fight continued to develop but with the Colonials now assisting them, cementing this unthinkable union. As the two fleets closed a squadron of A-Wings encountered a group of Vipers and Raptors. Unfortunately for the Colonial fighters, the A-Wings were loaded with concussion missiles and wiped out the entire Colonial group before they reached gun range. With this dogfight concluded the Cylon and Rebel players looked at the other end of the table. Their first question asked: "where are the Shadows?" It seemed that the Shadows had phased into hyperspace and were re-positioning for a different angle of attack. 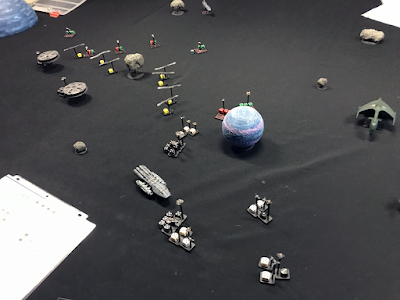 The fight at the Cylon-Rebel end of the table had the beginnings of a real vicious fight as fighters clashed, missiles raced across space, and turbolasers from the bigger Rebel ships impacted Cylon armour. 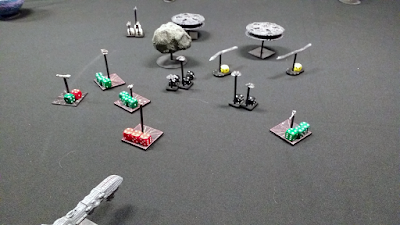 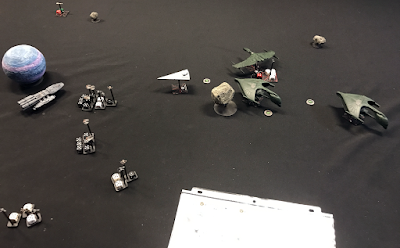 The Romulans, Imperials, and Colonials could hardly pay attention to the Rebel's conundrum as the fight here was also getting interesting. The Imperials, deciding to take on the Battlestar, could only afford to send their fighters against the Romulans. While the Romulans were still under cloak, the Imperial fighters closed in on the visual distortions with the intent of hitting them with their shields down. This forced the Romulans to de-cloak and open up with disruptors and photon torpedoes. The Imperial fighters certainly had elan but when targeted by multi-megaton photon torpedoes set to proximity detonation that doesn't mean much. The Imperial fighters were significantly reduced in number and achieved little damage. The turbolasers of the Imperial Heavy Cruiser began exchanging fire with the Battlestar's kinetic batteries. The outcome of this firefight was uncertain with both sides taking damage. However, after trading many shots, the Imperial ship's forward shields finally cracked and the front of the ship started taking damage. Many minor systems were taken offline but most important of all the forward shield generators were wrecked keeping the forward shield down permanently. 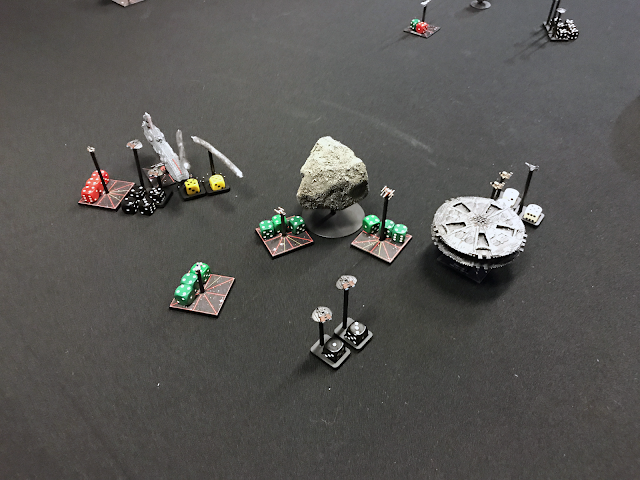 As the Imperial's outlook became grimmer and the Colonial's brighter, a great cry was let loose from the Rebel player. Becoming frustrated by the lack of progress against the Cylon Basestars, the Interdictor was brought into weapon range. This is when the Rebel player remembered that the Interdictor was armed with capital grade proton torpedo launchers. As a hail mary, a volley of proton torpedoes was sent towards the nearest Basestar. Only a single torpedo managed to impact the huge double-disc ship but its effect was massive. Penetrating into the heart of the Basestar the most unlucky of critical rolls seen in quite some time saw the round hit the central reactor and the ship split into two pieces. However, the universe is not without its sense of irony. Moments after this display of bad luck, a display of good judgement by the Cylons was seen. Four squadrons of Raiders unleashed their loadouts of Nukes upon the front of the Rebel Heavy Cruiser. The explosive effect of these weapons was finally enough to drop the front shields. As the Raiders cleared the area twenty shaped-charge Cylon missiles hit the hull of the Rebel Heavy Cruiser. When the radiation cleared the front of the Rebel ship was no longer in one piece. Her main sensor array had been destroyed, her bridge lifeless, all forward guns knocked out, and her CiC capabilities ruined. The Rebel player no longer looked as happy while the Cylon player had the look of someone who had exacted righteous revenge. 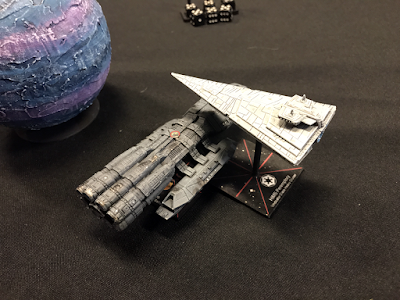 With the game drawing to a close and not to be outdone, the Imperial player decided to end the game in a spectacular way. Turning to his XO, the captain of the Imperial Heavy Cruiser ordered a RAM on the Battlestar. The Colonial player, in a moment of clairvoyence (i.e. the Imperial player gleefully announced his intention), predicted this move and attempted to move out of the way. Unfortunately one does not simply dodge with millions of metric tons of metal. The gunnery captains on the starboard side of the Battlestar fired with everything they had in a desperate attempt to stop the Imperial ship but there was little hope of stopping the ballistic approach of the Imperial ship. With breaths held, every player watched as an 8,000,000t Imperial starship collided with a 60,000,000t Colonial starship at close to 30% the speed of light. After a blinding flash little remained to tell the fate of these massive warships save perhaps a scorched atmosphere on the nearby moon.

At this point both the Imperial and Colonial players had only segments of their airwings left. The Shadows were lurking in the... umm... shadows, the Cylons had lost half their Basestars and over half their Raiders, the Rebels were leaderless, the Starfleet ship was light minutes away attempting damage control, and only the Romulans were in any shape to continue the fight. We all decided to retreat to the backyard for a debrief/argument.

I would like to thank Matt, Adam, Anthony, Simon, Lino, and Melissa for giving me a most enjoyable evening and I assure you it will be a while before we do anything that massive or silly.