Skip to main content
Labels
Posted by Man For All Seasons June 17, 2017

Hello everyone, this past Friday I challenged my good friend Simon to a one-on-one game of Metaverse using custom fleets. As Simon had not yet designed a custom fleet in the game this would be his first experience with it. I of course have many custom fleets designed and so I gave him a choice of three vague options for him to face. He decided on the Space Organism option. After designing his fleet he informed me of a 2100 point total for the game and I prepped my fleet. I'm not sure what it was that Simon expected to face when he arrived at my place on Friday evening but what he found was certainly a surprise. I explained to him that his little fleet, in the process of investigating some interesting sensor readings of a nearby solar system came to discover that this was no ordinary solar system. In fact it appeared to more like a giant organism several AUs across. His intrusion into the organisms' space seemed to have triggered some form of immune response. That immune response was the fleet that he would be facing.

By far the most numerous of the incoming vessels, or cells if you will, were 21 of these little organic clumps. They emitted very little EM radiation and had no visible weapon ports. They did however seem to have several what could only be described as birth canals. His intelligence officers gave these strange "things" the designation: Parasite Class. 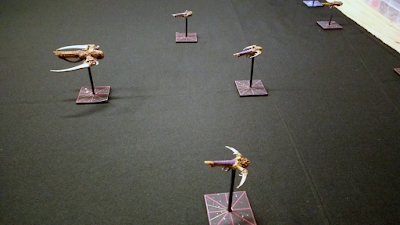 Far larger than the more numerous cells on the flanks, were three medium sized cells and one larger cell. These "ships" clearly were centered around some form of biological laser weapon and were protected by some form of bone like ablative armour. The smaller ships were designated Hemoglobin Class and the larger ship was designated Phage Class. 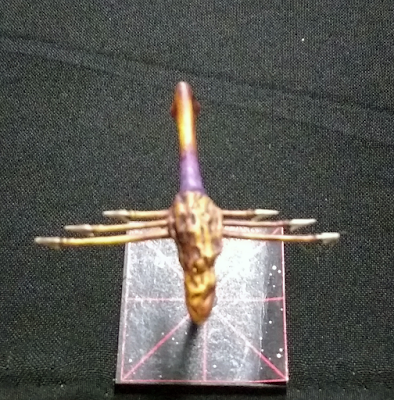 At the heart of the swarm was an unusual ship sporting many spines and emitting an exceptionally strong EM signature that made sensor scans of the local area very difficult. Simon's intelligence officers concluded that his must be some form of nerve center for the organisms and designated it Ganglion Class. To the flanks of this odd vessel were two ships that seemed to be up-scaled versions of the Parasite Class with a much larger and more robust birth canal. Wondering as to the purpose of these orifices, his intelligence officers designated these two vessels Placenta Class.

The fleet that Simon brought to bear on this odd collection of biomass was stylized after flying saucers. Not yet having acquired the models for this fleet Simon borrowed some of my Cylon models as substitutes. At the center of his fleet was a Roswell Class Saucer that acted as both command ship and carrier launching Foo Fighters! Flanking this flying cliche were two Ghost Rocket Class Saucers that acted as escorts and gun platforms. Finally on the far flanks were nine Monkey Wrench Class Saucers. Tiny in comparison to the larger saucers these ships seemed to be some form of fast attack vessel. 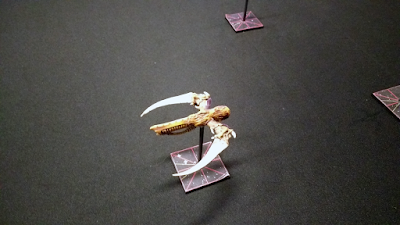 The game setup placed our two fleets approximately 3 light seconds distant from each other. On the first turn the core of the bio fleet began a lazy acceleration towards the Saucers. Simon wondered why these vessels that were essentially big guns were not closing the distance faster. 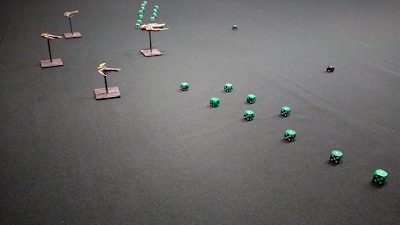 He soon realized why the enemy was not closing faster. Within seconds of the battle beginning the 21 Parasite Class ships each launched a single small attack craft of some kind. These fast moving small vessels were designated Anti-Body Class. At this point it was not clear what the purpose of this swarm was but it was noticed that the launching vessels noticeably reduced in mass when the craft were launched and then slowly regained that mass over the following seconds. Suspicions arose that these biological vessels may be slowly generating these antibodies. In addition to these Anti-Bodies the two Placenta Class each launched a different and much larger kind of attack craft designated T-Cells. Each of the Placenta Class followed the same mass shrinking and growing pattern as their smaller cousins. 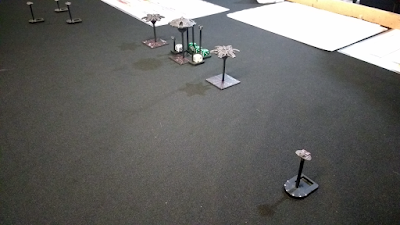 In response to the sudden appearance of 23 attack craft, the central saucer began launching its Foo Fighters. The Monkey Wrench Class Saucers started to accelerate ahead of the larger saucers and started the process of charging their FTL drives. 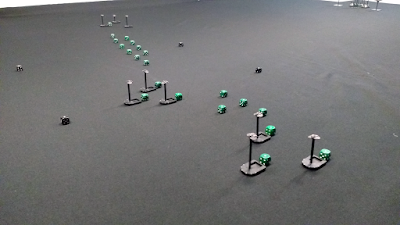 Moments later with a flash these 9 frigate sized saucers leaped across 2 light seconds to bring themselves into weapons range and right into the middle of the wave of Anti-Bodies. Strangely the small saucers did not fire at the large bio ships now in range indicating that they needed to close further. When the bio ships attempted to fire their biological lasers at the incoming ships they found little success as each of these saucers was producing significant amounts of defensive EW. Instead, a number of the Anti-Bodies turned back and closed with the little saucers. At this point Simon realized that these Anti-Bodies were aptly named as they appeared to have no weaponry. Closing in at high speed the biological attack craft collided with the saucers, penetrated the hull and unleashed biological terrors into the hallways. These monstrosities started to consume the crew and destroy the equipment with abandon. This space organism wasn't just going to fight Simon's fleet, it was going to eat them! After this first wave of Anti-Bodies, three of the nine Monkey Wrench Class Saucers were consumed from the inside out. 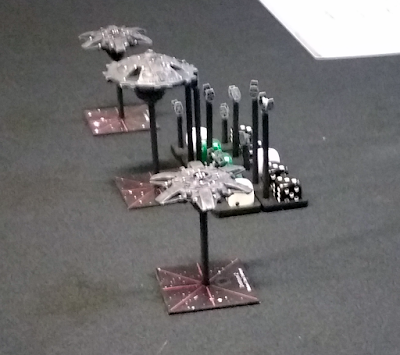 Watching in horror the larger saucers could only launch more Foo Fighters in the hopes of keeping these Anti-Bodies at bay. Unfortunately the load-out of the Foo Fighters was 60% anti-ship.

Looking across 2 1/2 light seconds the commanders of the saucers began to sweat as more and more Anti-Bodies were unleashed as well as the larger T-Cells whose function still remained a mystery. 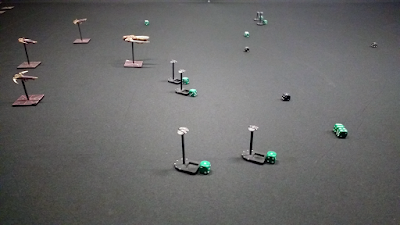 The Monkey Wrench Class Saucers now struggled to survive but were also determined to disrupt the main body of bio ships long enough for their larger brethren to adapt to the situation. Anti-Bodies continued to pour into the hapless ships. In the next few minutes four of the remaining six ships succumbed to unholy boarders.

With their air group now fully deployed the commander of the saucers now made a crucial mistake. While the Foo Fighters with anti-ship missiles on board were capable of using their on board weaponry to fight off the Anti-Bodies, the commander chose to launch half of his Foo Fighters on strike missions with the intention of striking at the heavier bio-ships. This decision came from a career of combat experience against foes similar to his own fleet, not against the immune system of a solar system scale organism. The commander hoped that the remaining half of his Foo Fighters would be enough to fend off the bio attack craft.

Unfortunately the Foo Fighters were too slow to cross the incredible distance in time to affect the outcome of the battle. 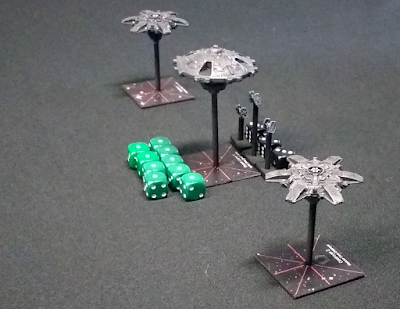 Just as the commander feared the remaining Foo Fighters on CAP would not be enough to prevent the Anti-Bodies from reaching the large saucers. In desperation the saucers opened up with their Flak batteries into the middle of the furball around the Roswell. These Flak batteries did tear through the incoming attack craft but also decimated the defending CAP. In the end five Anti-Bodies survived and deposited their terrifying cargo into the forward section of the saucer. This boarding action did not bring down the saucer but a portion of the crew was consumed and numerous systems in the forward section were wrecked by rampaging biological horrors. 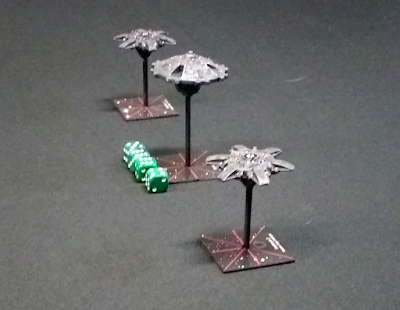 As if to add insult to injury, minutes later another wave of Anti-Bodies screamed into the fleet fighting their way through the Flak field. Again their numbers were decimated as the gunners did their utmost to destroy them but again a small number got through and added their cargo to the expanding combat on board the Roswell. 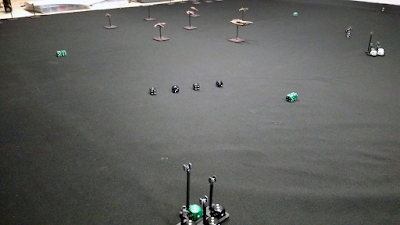 At the other end of the battlespace the Monkey Wrench Class Saucers were now all gone. The Foo Fighter strike missions were closing in on their prey but the CAG was tracking a growing number of T-Cell attack craft shadowing their moves. He suspected that they must be some form of starfighter analogue. The Foo Fighters would have to fight their way into the fleet. 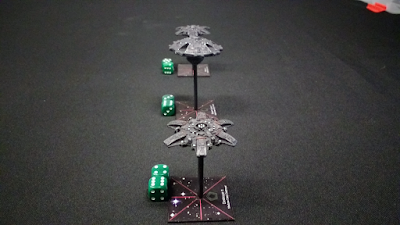 As the CAG was reporting his situation back to the fleet the comm channel went crazy. One moment the voice on the other end of the line was calm and collected and the next moment the fighter pilot heard screaming, gunshots, and a sound not unlike a whale song and a tiger's roar mixed together. Moments later the channel was cut. Looking back the CAG saw that all three ships had been boarded, their power was flickering and it was unlikely their would be anything friendly alive back there. With no way home, and a hopeless situation in front of him the pilot ordered a full charge into the abyss.

With a confused and frowning face Simon then threw in the towel. Being his first experience with custom fleets Simon had admitted that he did not expect to win this game but he then admitted that the enemy he fought was certainly not one he expected. I feel a little bad about bringing this fleet to the game but then again it is the one Simon chose, even if only vaguely aware of what it was. I did assure Simon that this bio fleet is not some unbeatable fleet, in fact it is quite vulnerable to many fleets, his just was the wrong one to bring. Rather than being upset or angry, Simon walked away from the table with a grim determination and design revisions floating in his head.