Skip to main content
Labels
Posted by Man For All Seasons May 09, 2020


Good day fellow starship fanatics. The Archanis campaign has continued into the second month (in campaign) and the action continues apace. A lack of large fleet engagements in month two does not mean there were no skirmishes and brushes with danger. 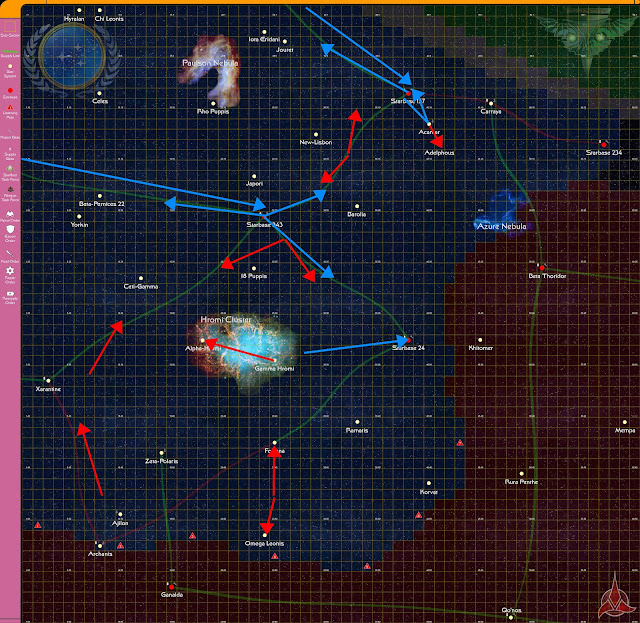 The movement portrayed here is an average of the fleet movements not the specific path of any fleet and only shows those movements at the front lines.

The second month of campaigning centered on the actions of House Korath and its many Birds of Prey. General Korath had separated his many small scout ships into wolf packs and dispersed them across the battlefront, penetrating Starfleet's lines to cause as much chaos as possible. This lead to Starfleet assigning a noticeable portion of the fleet to escort duty along the supply routes. Smartly, Admiral Gow mostly assigned older, slower vessels like Mirandas, Constellations, and a few Excelsiors leaving his more powerful, faster vessels to form combat groups. As his Birds of Prey were causing problems behind enemy lines, General Korath also conquered the Adelphous system.


For his part, General Antaak was not idle. With Starfleet pulling back to his front, the General conquered the Omega Leonis, Fortuna, and Alpha-Hromi systems. On his other flank his forces secured orbital control of Xarantine and pushed fleets past the system opening up Starfleet's rear. 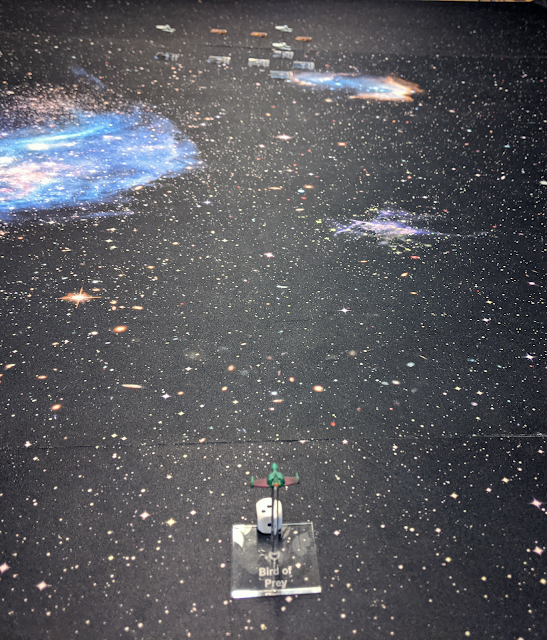 One of House Korath's raiding groups believed it had found a juicy target when it tracked onto a slow moving collection of six warp signatures. The three B'Rel Class Birds of Prey pursued the group and dropped to impulse. 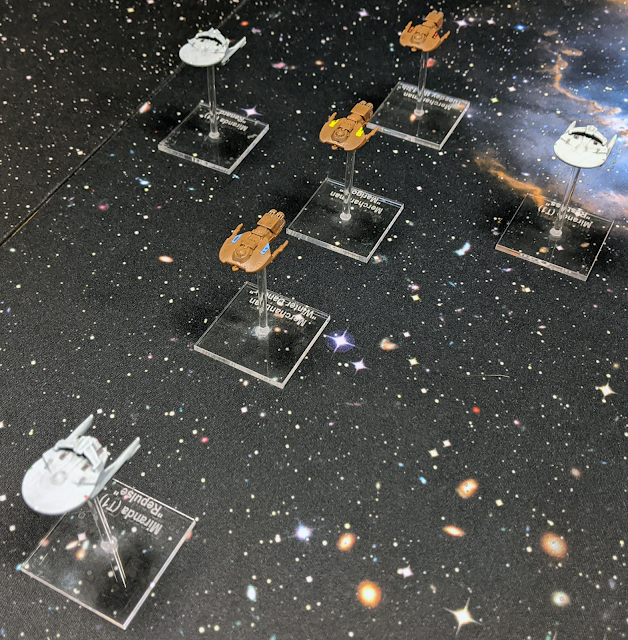 Unfortunately, this group was not only defenseless merchantmen. Three of the sensor contacts were escorting Miranda Class Destroyers. Not deterred but emboldened, the Klingons accelerated to full impulse. 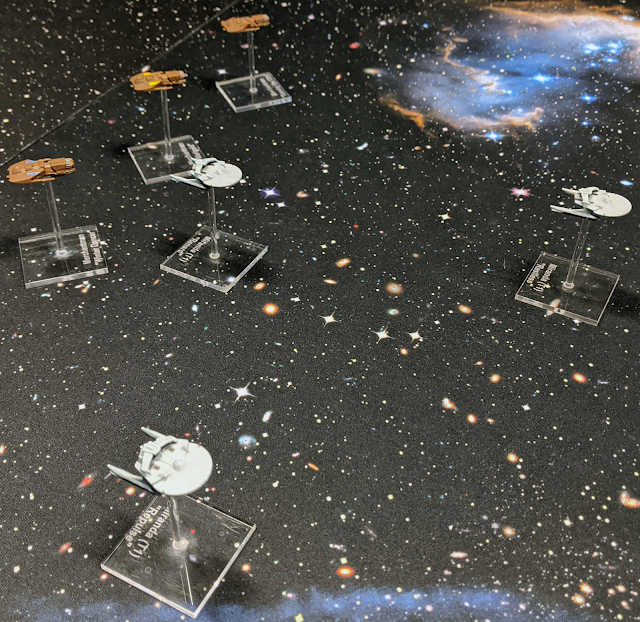 Following standard procedure, the Starfleet ships turned into the Klingons while the freighters made to escape. 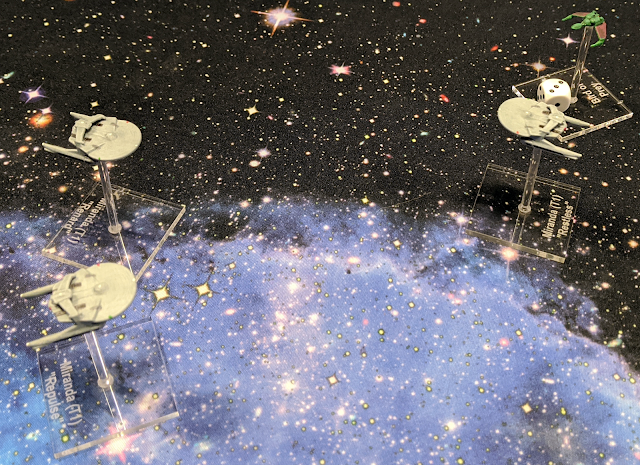 The B'Rels danced and weaved under cloak closing the distance. Starfleet fired a few errant torpedoes hoping to get lucky to no avail. Finally, the Klingons closed to point blank with the Mirandas and dropped their cloak. Disruptors and torpedoes targeted the nearest Miranda and left her a drifting debris field. For their efforts, the three B'Rels were quickly destroyed. One less Klingon raiding group could annoy Starfleet but they had one less old destroyer to combat them with. 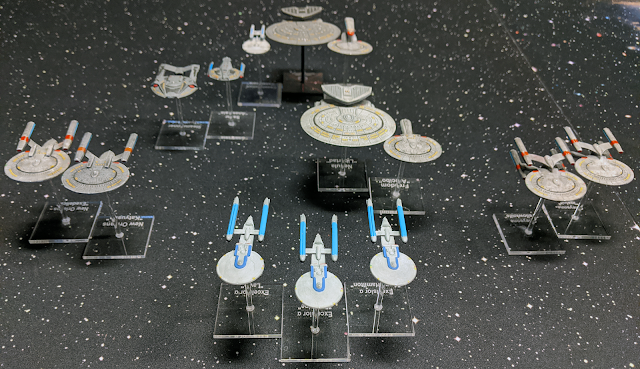 Eventually Admiral Gow felt that he had assembled a strong enough task force to push back against the forces of House Korath and their salient around Carraya and Acamar. Setting out from Starbase 157, 14 ships headed to Acamar to confront the Klingons. Two Nebula Class Heavy Cruisers, three Excelsior Class Explorers, one Constellation Class Cruiser, one Challenger Class Light Cruiser, one Steamrunner Class Light Cruiser, two New Orleans Class Frigates, two Cheyenne Class Frigates, one Freedom Class Destroyer, and one Saber Class Frigate made for an imposing force.

The Starfleet force dropped out of warp in the Acamar system and got a look at the opposition for the first time. Five Vorcha Class Attack Cruisers, one Karas Class Strike Cruiser, three K'Vort Class Light Cruisers, five K'Tinga Class Battlecruisers, nine B'Rel Class Birds of Prey, and six Khitomer Class Birds of Prey. Taking one look, the Starfleet group immediately reversed course and headed back to the starbase. The Acamarians weren't that important apparently. 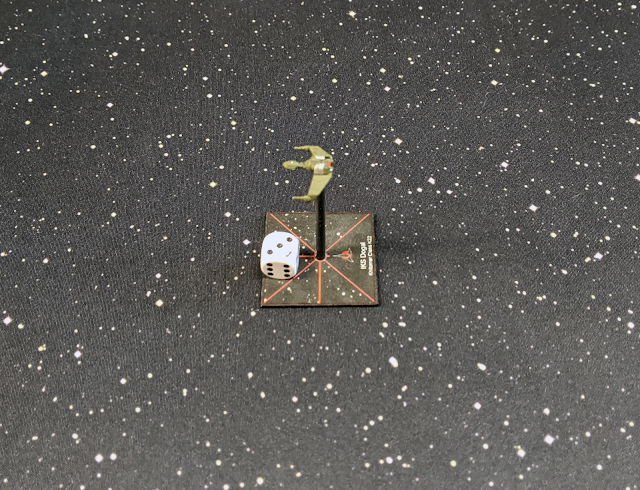 The raiding groups of House Korath had become ever more successful and ever more bold intermittently disrupting supply shipments across much of the sector. One squadron chased down a tempting target, dropped to impulse and prepared for combat. 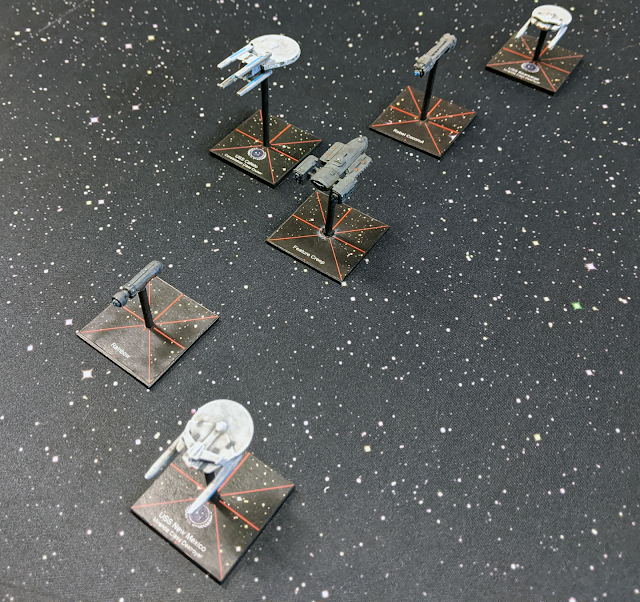 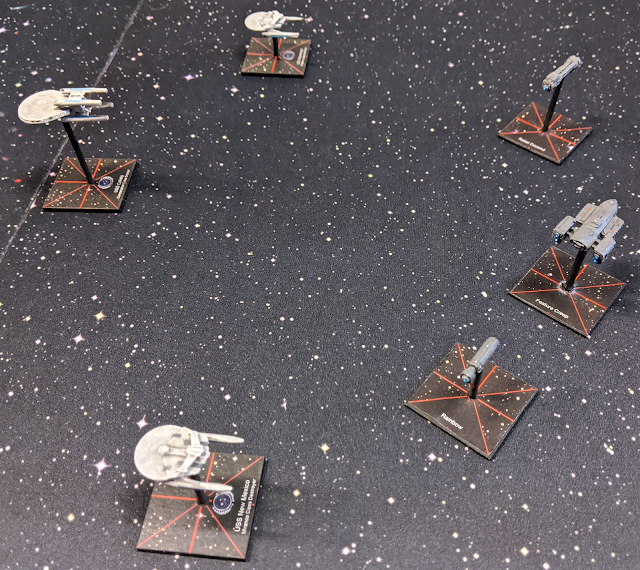 Just as before the Starfleet ships turned to face the Klingons while the civilians made a run for it.

At medium range Starfleet began a blind torpedo bombardment of the cloaked ships and got lucky. One B'Rel Bird of Prey was struck by a photon torpedo while cloaked and therefore without shields. It died in an antimatter fire. 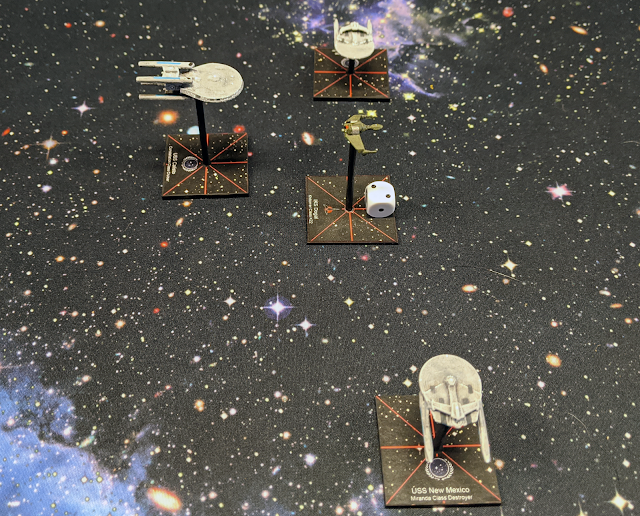 The bad luck of the Klingons did not end with a lucky torpedo. Screaming towards Starfleet at full impulse the two remaining Birds of Prey performed an end-to-end flip attempting to bring themselves into the enemy's rear. Starfleet had predicted this maneuver with the Constellation going full reverse and the flanking Mirandas turning inwards. A perfect kill box had been created. Though the Klingons were still cloaked, at this range the chances were not zero to achieve hits and another bird bit the dust. 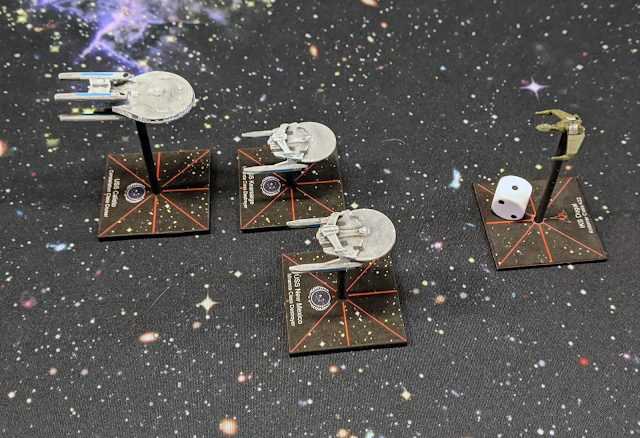 Realizing that the only two options were Sto'Vo'Kor or Gre'thor, the Klingons chose the former. Cutting their velocity even further by flipping again, the Klingons dropped their cloak and opened fire flashing the shields of the closest Miranda. For their valiant action, the last remaining Bird of Prey joined its brothers.

These small actions (and one denied action) along with a couple actions involving only a single Bird of Prey that didn't warrant photos, brings the campaign to the end of the second month. 60 days have now transpired and the Klingons have made significant gains. Starfleet, in response, has established an extensive network of escorts for it's supply routes and is forming strong battle groups to retake conquered space. The next month could decide the campaign.


The rules for the tactical gameplay is Metaverse second edition, as yet unreleased. The first edition can be found here.