Skip to main content
Labels
Posted by Man For All Seasons May 01, 2020


Good morning fellow starship enthusiasts. The Archanis campaign continues to progress, though with a slightly longer delay between turns as one of the Klingon players has been deployed to the sea (damn navy getting in the way of our hobby). Thankfully, the player has been able to process ~a turn a day so we haven't stopped. 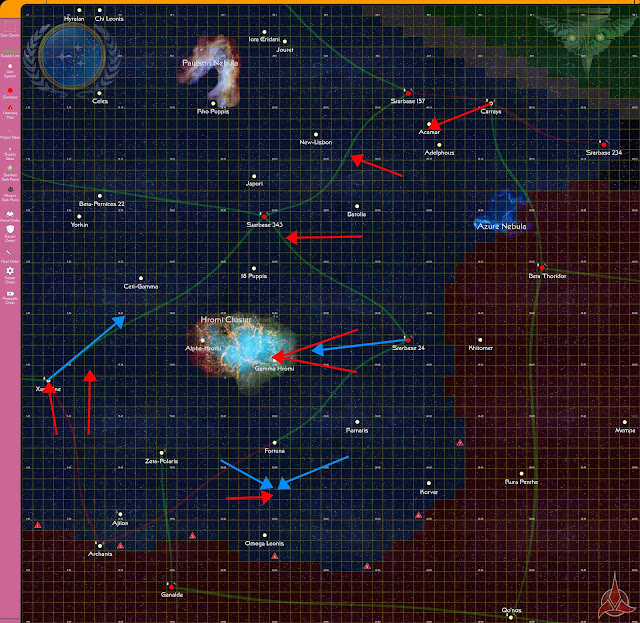 The movement portrayed here is an average of the fleet movements not the specific path of any fleet and also only shows those movements at the front lines.


The next few days of the campaign saw a flurry of maneuvering and action. House Antaak established a supply base in the Zeta-Polaris system to further the reach of their fleets while House Korath conquered the Acamar system. The fact that the Acamarians are not even members of the Federation did not seem to bother the Klingons.

Coreward, House Korath engaged in a kind of standoff with the Starfleet forces in the area. Both sides were aware of each other and knew their opponent possessed significant numbers of starships and neither side was willing to pull the trigger. Between Starbase 24 and 343, small groups of House Korath ships danced with their Starfleet counterparts hoping to infiltrate the lines. Two such task forces were forced to run for the protection of the Hromi Cluster with a squadron of Starfleet ships hot on their tails, just barely making it into the clouds of dust and gas.

Rimward, House Antaak continued to push against the Starfleet lines focusing on two axis; one towards Xarantine and the other towards Starbase 24. 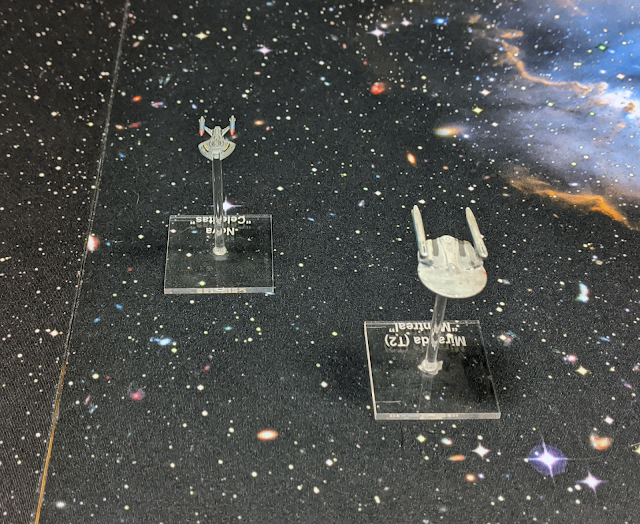 The Xarantine system houses a Starfleet ground supply base and hosted a small garrison force of Starfleet ships. This garrison detected cloaked warp signatures incoming to Xarantine and moved out to intercept them. A Nova Class Science Vessel and a Miranda Class Destroyer [Tempest Subclass] would be able to deal with a few Klingon ships. 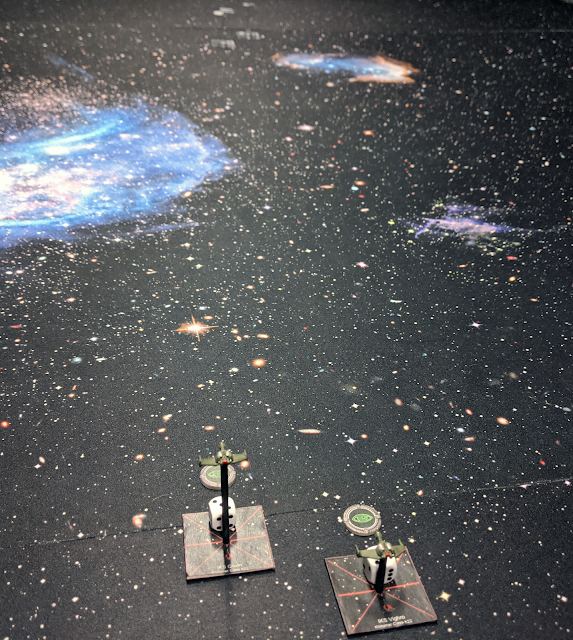 However, as they raced out of the system, another group of Klingon ships intercepted them in turn. Six B'Rel Class Birds of Prey forced the Starfleet ships out of warp and an unexpected battle began. 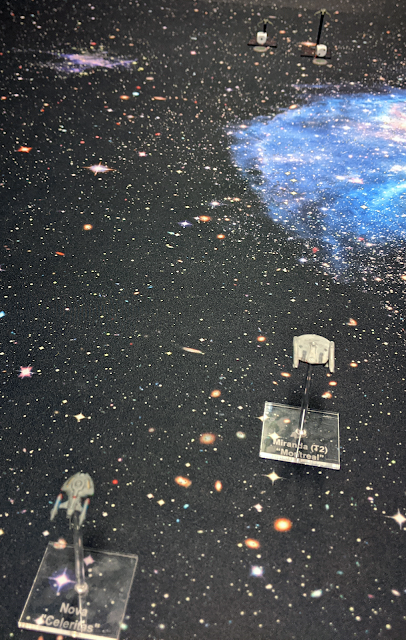 As the two groups engaged their impulse engines, the Miranda took point position to protect the smaller science ship.

Bravely she closed to point blank range and blind fired her torpedoes and phasers at the cloaked targets. In return the Klingons dropped their cloaks and put everything they had into the stalwart ship. Pulse disruptors and torpedoes tore into the century old ship and in a handful of seconds she was destroyed. 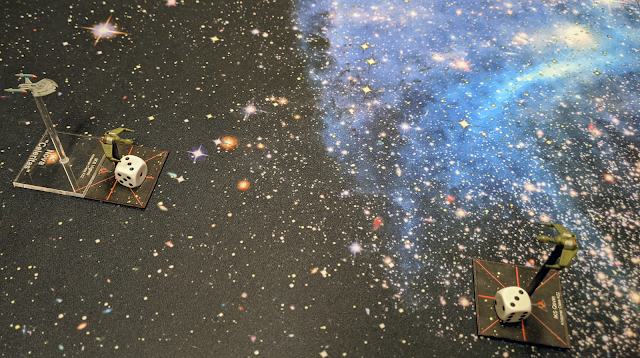 All that was left was the 'helpless' science vessel. Three Birds of Prey hung back while the other three sped forward and performed a loop to hopefully catch the enemy in a cross fire. However, the Nova predicted this maneuver and slammed on the brakes leaving her outside the Klingon's kill box. In short succession she speared two Birds of Prey with phaser fire and they exploded. Unfortunately, she was still only a science ship and was quickly destroyed by the remaining Klingons. The way to Xarantine was open. 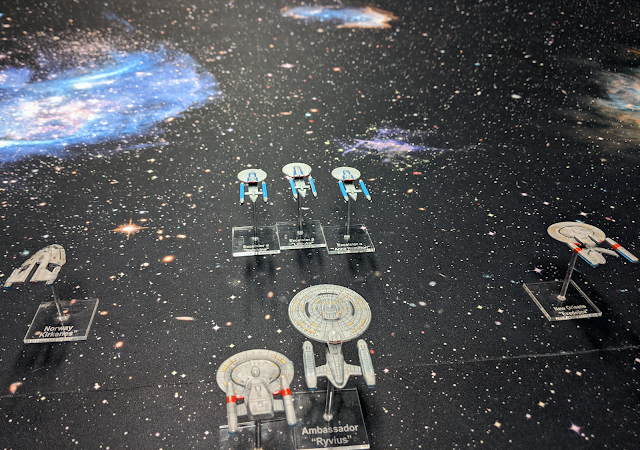 House Antaak had been advancing relatively unopposed in the space between Archanis and Starbase 24 but Starfleet aimed to blunt that advance. A task force was formed centered around the Admiral's flagship, an Ambassador Class Explorer. She was joined by three Excelsior Class Explorers, one Norway Class Destroyer, one New Orleans Class Frigate, and one Springfield Class Frigate with an SWAC pod installed. This was not the most powerful group Starfleet had but it should be good enough for the job asked of it. 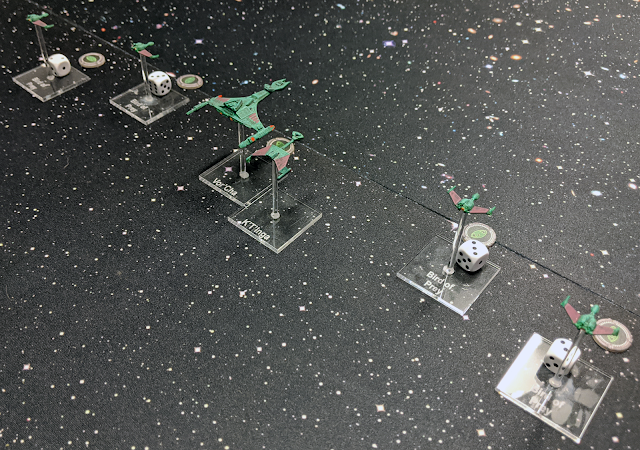 Flying smack into the face of the Klingon advance, Starfleet faced a Klingon group of one Vorcha Class Attack Cruiser, one K'Tinga Class Battlecruiser, five B'Rel Class Birds of Prey, and six Khitomer Class Birds of Prey. The Khitomer Class are the newest Bird of Prey design and come from the KDF forces. Until this point Starfleet had only faced the house fleets primarily composed of older designs. House Antaak had requested reinforcements it appeared. 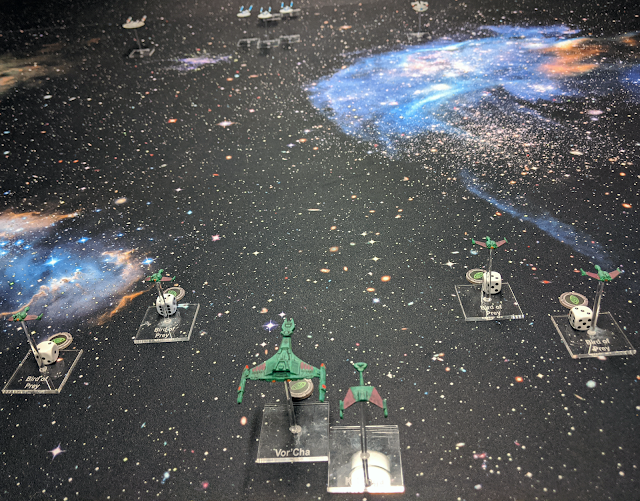 The two fleets closed the distance at full impulse with the Klingons waiting to drop their cloaks until optimum range. 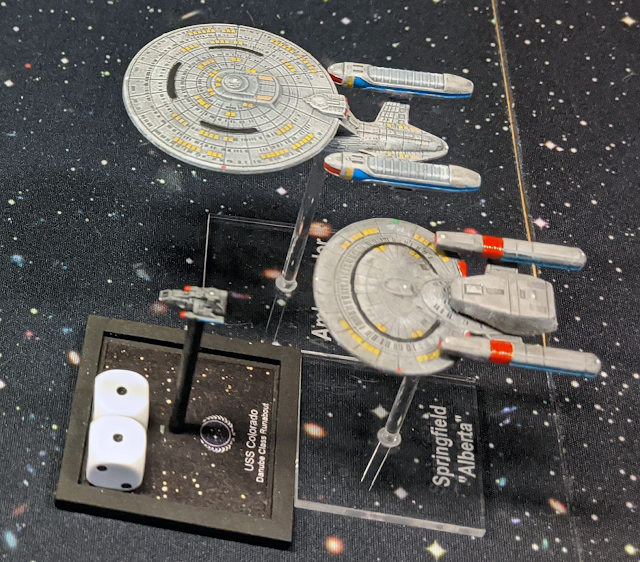 As the range closed the Ambassador launched a pair of Danube Runabouts to assist the fleet. 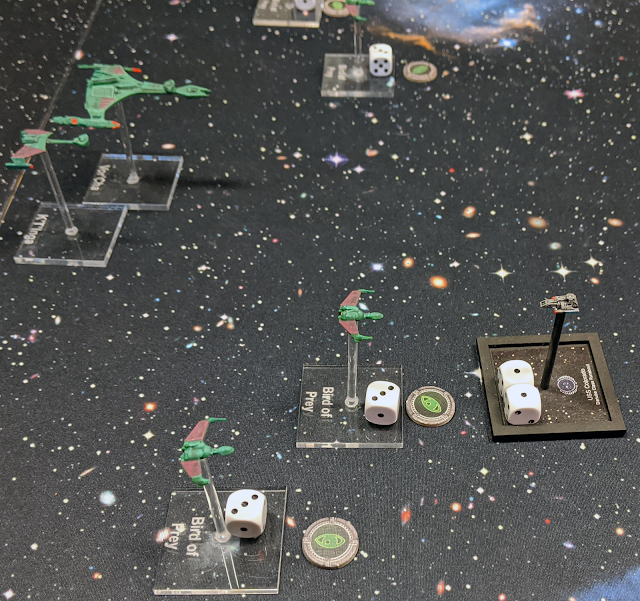 These jinky gunboats were immediately dispatched to thin the herd of Birds of Prey. Curiously the Vorcha and her K'Tinga escort dropped their cloaks while the Birds remained cloaked. Starfleet began to concentrate their firepower upon the Vorcha hoping to cripple the powerful vessel before it could close but the range was long and little damage was achieved. The return fire from the Vorcha was equally disappointing. The Danubes, however, did not disappoint, killing two Khitomer Birds of Prey over the next few minutes.

With the Vorcha and K'Tinga engaged in a gunnery duel with the Excelsiors, the Birds of Prey raced ahead under cloak towards Starfleet's center. Starfleet kept their center strong and swung the New Orleans and Norway out to the flanks but did so a little too early. In the ensuing firefight the Vorcha had her forward shields dropped and her hull lightly scorched. In response an Excelsior was gutted and destroyed but not before three more Birds of Prey sailed for Sto'Vo'Kor.

As the fleets closed it became obvious what the Klingons were attempting to achieve. The Birds of Prey flew past the main line and decloaked pouring fire into the Ambassador to keep her busy. Meanwhile the Vorcha and K'Tinga got so close to the enemy they could have boarded by simply jumping out an airlock. The next few seconds found both the remaining Excelsiors destroyed. For her efforts, the Vorcha no longer had bow, port, or starboard shields and her hull was breached in multiple locations while the K'Tinga was reduced to drifting debris. 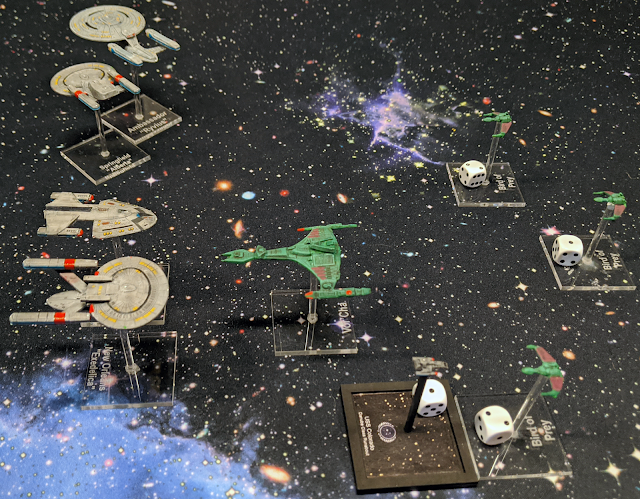 Thinking that the Vorcha would continue on to capitalize on the light damage dealt by the Birds of Prey, the Ambassador and Springfield turned to starboard unmasking their rear torpedo tubes. However, the Vorcha was not aiming for the flagship. Performing a high G flip, she came about to attack the remaining frigates with the Birds of Prey hot on her heels. The Vorcha was so damaged at this point it was simple for the Starfleet ships to finish her off but at this range her remaining weapons backed up by the torpedoes of the Birds of Prey tore the Norway apart.

With their command ship destroyed, the remaining Klingon ships attempted to flee but were chased down and destroyed by the Starfleet survivors. The toll for this battle was heavy. The Klingons lost one Vorcha, one K'Tinga, three B'Rels, and four Khitomers. To achieve these kills Starfleet lost three Excelsiors, one Norway, and two Danubes. Even though Starfleet claimed a tactical victory, the Klingons celebrated a glorious battle.

The rules for the tactical gameplay is Metaverse second edition, as yet unreleased. The first edition can be found here.