Skip to main content
Labels
Posted by Man For All Seasons May 11, 2020


Good day space junkies. The Archanis Campaign has continued into its third month (in campaign) with a renewed sense of action. Some seriously important developments occurred during this time which makes this entry a long one. 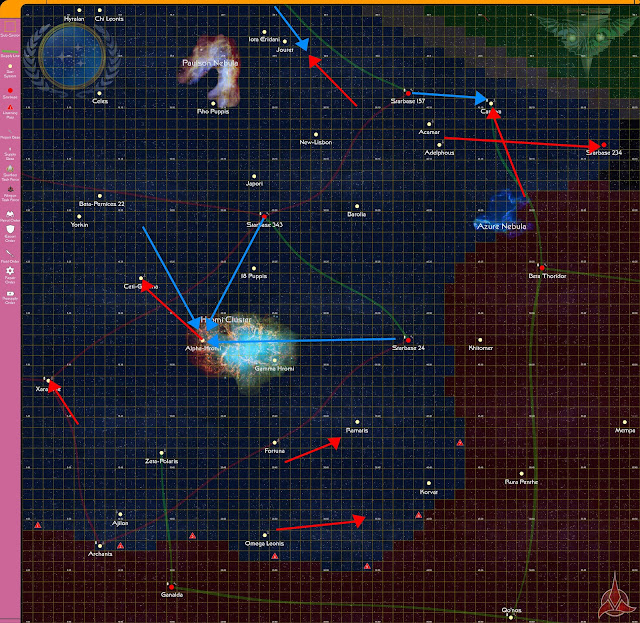 The movement portrayed here is an average of the fleet movements not the specific path of any fleet and only shows those movements at the front lines.


As the Federation-Klingon War progressed into it's third month Starfleet's position got more tenuous but also hopeful. House Antaak continued its conquering spree adding the Ceti-Gamma and Xarantine systems to its holdings while making a push towards Ramatis and Korvat. House Korath continued its efforts to be the most annoying group of Klingons with its many dispersed raiding squadrons. However, Starfleet had by now amalgamated enough forces to form a second battle group based out of Starbase 343, joining the first group out of Starbase 157. Feeling confident, these groups pushed out from their home bases to take back the space that had been lost over the previous two months. 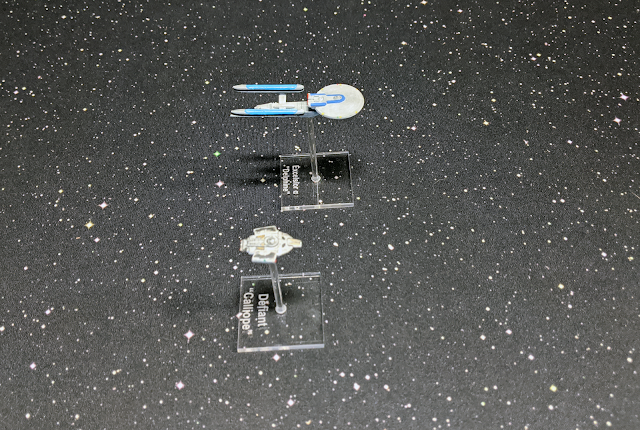 Throughout the campaign, Starfleet forces had been streaming into the area in small groups, coalescing the disparate elements of the 22nd Fleet. One such group of reinforcements, an Excelsior Class Explorer and a Defiant Class Escort, were travelling to Starbase 157 when they detected a cloaked ship nearby. Laying in a pursuit course these starships expected to encounter one of the many annoying Birds of Prey of House Korath. 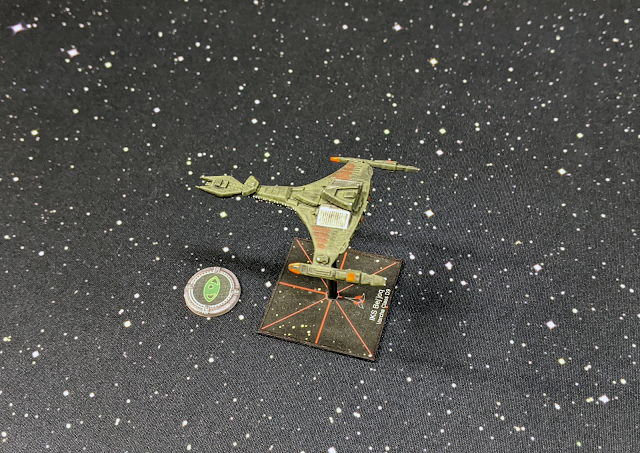 What awaited them was something else entirely. Somehow a lone Vorcha Class Attack Cruiser had infiltrated the lines and ended up near the supply line feeding Starbase 157. Who knows the damage the Klingon capital ship could have caused had it continued on undetected. 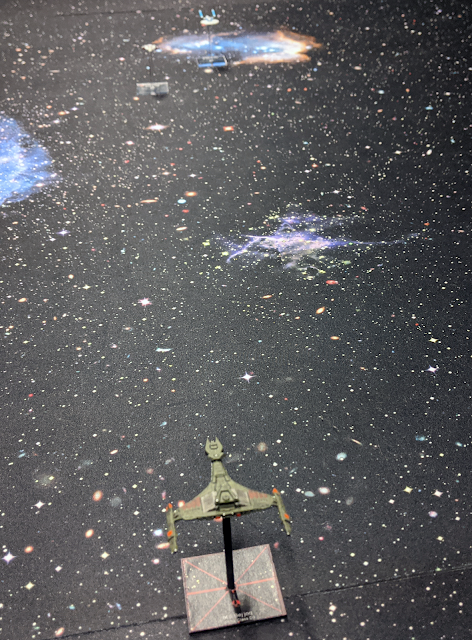 The two Starfleet ships hit the gas and sped towards the Vorcha which dropped its cloak and opened up long range torpedo fire against the Excelsior. At this range the torpedoes either missed or were shot down.

As the range closed the Vorcha was forced to switch targets. The Defiant had pushed ahead of the Excelsior and was flying right down the throat of the bigger Klingon ship. Pulse phasers and quantum torpedoes tore open the front of the Vorcha leaving the front half a burning wreck. However, simultaneously, the Vorcha's many disruptors and torpedo tubes dropped the forward shields of the Defiant and then something unexpected happened. Klingons began beaming over to the cramped little ship. Bat'leths clashed with phaser rifles and though the crew put up a valiant fight there were too many Klingons. In the midst of the brawl main power was knocked out and the ship left adrift at nearly 0.25c.

This left the Excelsior in an interesting situation as she now faced a half dead but still fighting Vorcha. She didn't flee and she didn't turn to fight, rather she chased after the Defiant and beamed some of her security teams over in an attempt to retake the ship, a fight that would continue for a while yet. The wounded Vorcha began a lazy turn and fired its meager side weapons into the rear of the Excelsior. 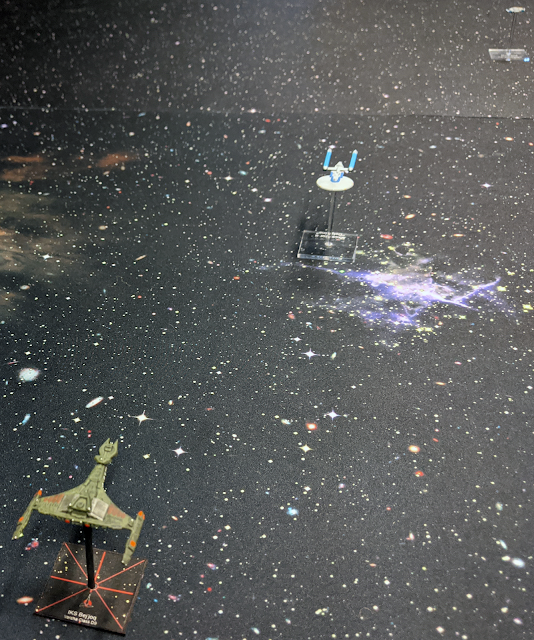 Having deposited some of her crew onto the Defiant, the Excelsior turned back to face the Vorcha. At medium range the two ships tore into one another until almost at the same time the Excelsior suffered a war core breach and the Vorcha broke apart from extensive damage. This left only a drifting and captured Defiant. The crew from the Excelsior that beamed over managed to eliminate half the Klingon boarders but were themselves put down. This left ~60 Klingons on a captured Starfleet ship drifting into the void at 1/4 light speed with main power shut down and the computer locked out. It would be a cold lonely death.

After having chased off Starfleets primary force in their area, the main fleet of House Korath sought to remove a thorn in their side. Almost from the beginning of the campaign, Starbase 234 had been cut off from Starfleet support by the Klingon advance and left out to dry. Warping into the system, General Korath intended to destroy the starbase with a fleet of five Vorchas, one Karas, three K'Vorts, five K'Tingas, and six Khitomers. 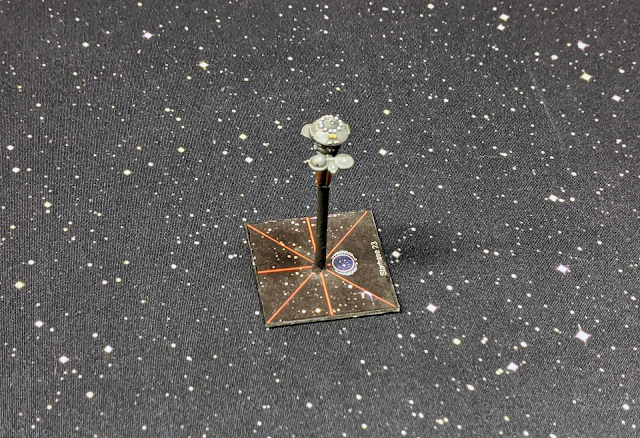 Starbase 234 was a Sigma Class Starbase (the same as Starbase 375 in the Dominon War), not the most powerful of starbases but nothing to dismiss out of hand. 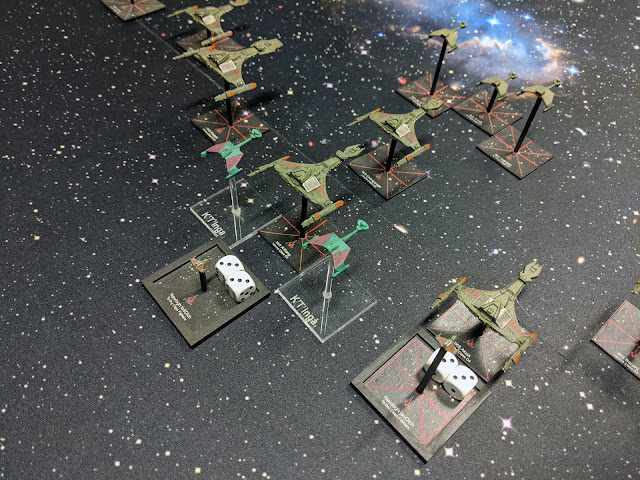 Immediately upon entering the system the Klingons began launching To'Duj Class Interceptors. Two of the Vorchas were Block Ds, a carrier variant. 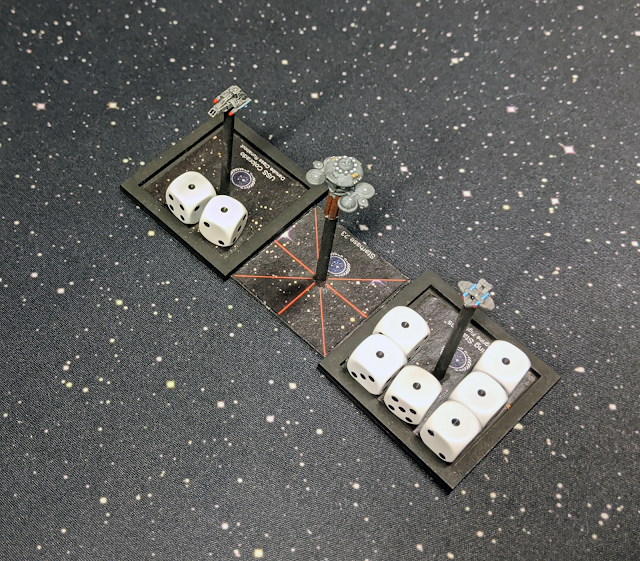 The Klingons were right to bring carrier support as in response the starbase launched six Peregrine Attack Fighters and two Danube Runabouts. 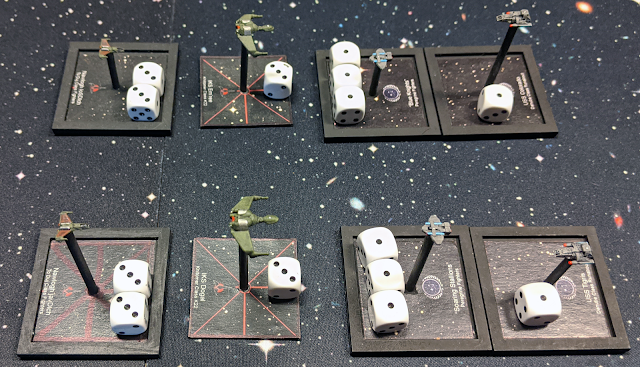 The Starfleet small craft flew out to the Klingon right flank intending to deal with the Birds of Prey deployed there. The To'Duj Interceptors moved to counter them. 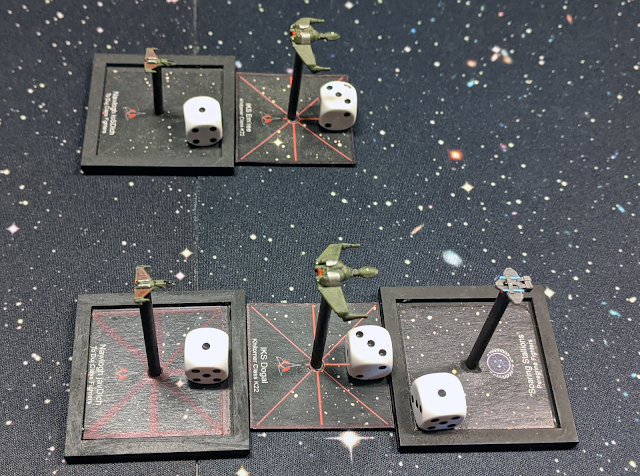 What followed was a bloody dogfight that felt out of place in Star Trek. Both Danubes and five of the Peregrines were destroyed along with almost all the To'Dujs. Critically, Starfleet's objective had not been met, the Birds of Prey were safe. 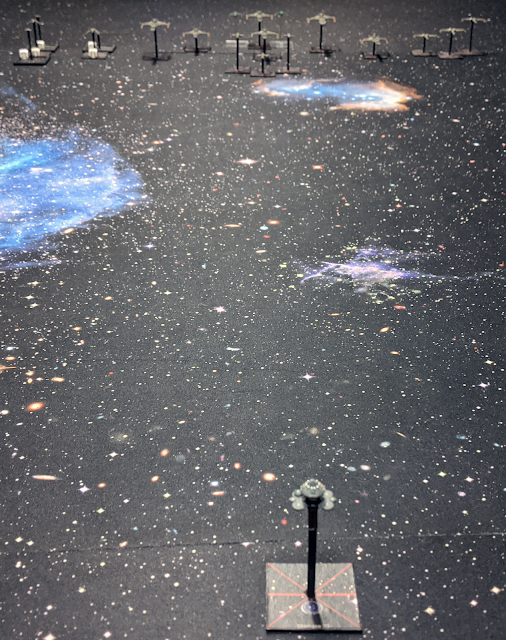 For a while the Klingons flew towards the starbase at 1/2 impulse happy to lay down a torpedo bombardment against the immovable station. The starbase responded with the torpedoes it had in arc.

Finally, the Klingons felt like they had softened up their target enough and began a full burn acceleration towards the starbase turning their flanking escorts inwards. In the ensuing seconds the Starbase's facing shields began to buckle under the strain. 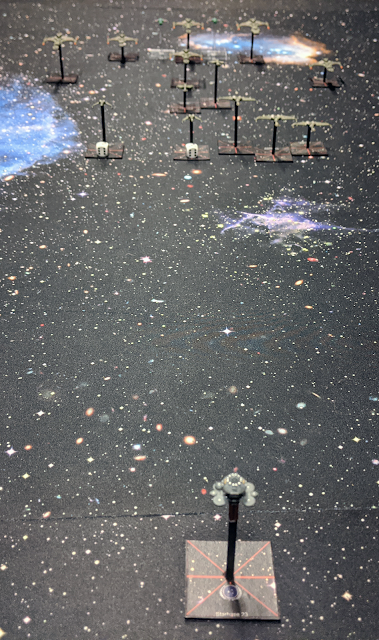 With the Klingons closing, the range was becoming optimal for phasers and the starbase reached out and eliminated a K'Tinga and a K'Vort  like they were composed of wet cardboard. In return the Klingons finally dropped the shields of the Starbase and landed hits directly to the hull but she was a big target and not easy to put down (the model I have is for Regula 1 and not to scale with the other models). 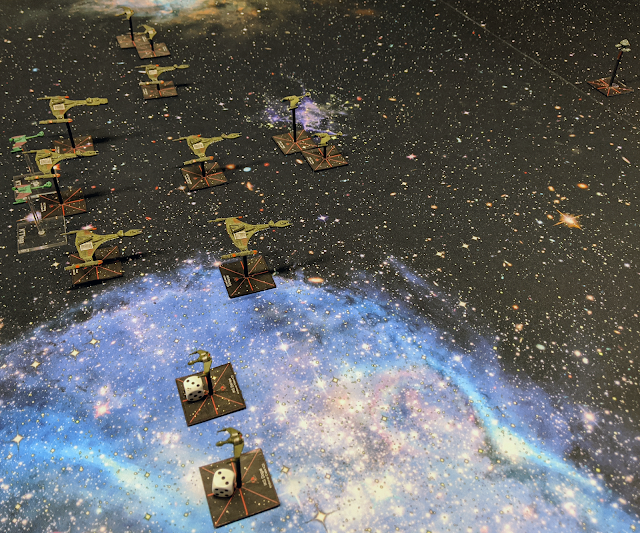 It became clear that even with her shields dropped, Starbase 234 was a tough nut and so the Klingons pulled their flanking escorts out of the line of fire to let their heavies do the work. The Starbase still managed to destroy two more K'Tingas over the next few seconds. But the fire against her was too great and too concentrated on one sector and she eventually broke up. A starbase like this is best utilized with a defending fleet to ensure the enemy must maneuver. Otherwise, the attacker can simply stack their firepower against one area. 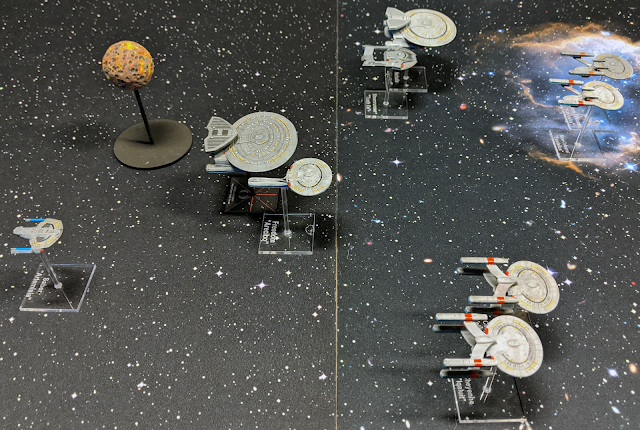 While General Korath was destroying Starbase 234, Starfleet punched into her strategic rear. The battle group from Starbase 157 launched for Carraya with the intention of seizing the supply base the Klingons had setup there. Having achieved orbital control, Starfleet prepared to land security on the planet and clear the Klingons out.

However, having noticed Starfleet's adventures at their supply base, the Klingons moved to perform a spoiling attack. A Qeh'Ral Class Dreadnought, Vorcha Class Attack Cruiser, K'Tinga Class Battlecruiser, and three B'Rel Class Birds of Prey would not be enough to push Starfleet out of the system but it might be enough to delay them until the rest of the fleet could return from their escapade at Starbase 234. 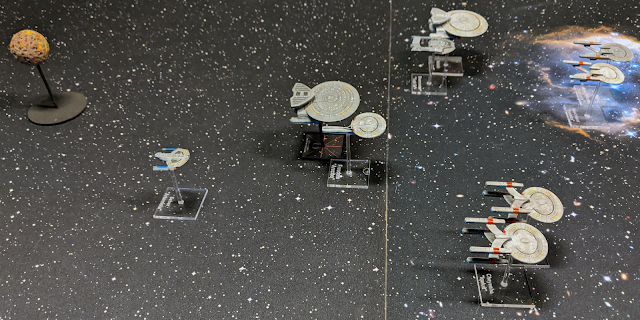 The Starfleet force pushed out of orbit of Carraya and moved to intercept the Klingon interlopers. This fleet had been seen before the only change was the dropping of its slower Excelsiors and Constellation at Starbase 157. 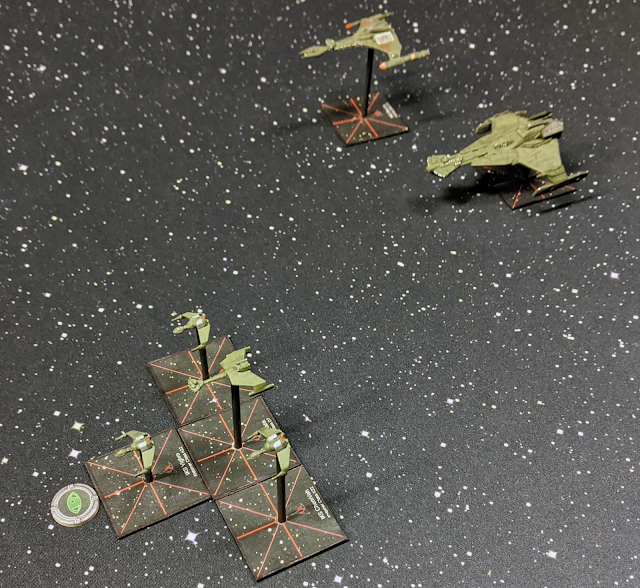 The Qeh'Ral and Vorcha dropped their cloaks while the K'Tinga and Birds of Prey raced forward at full impulse. 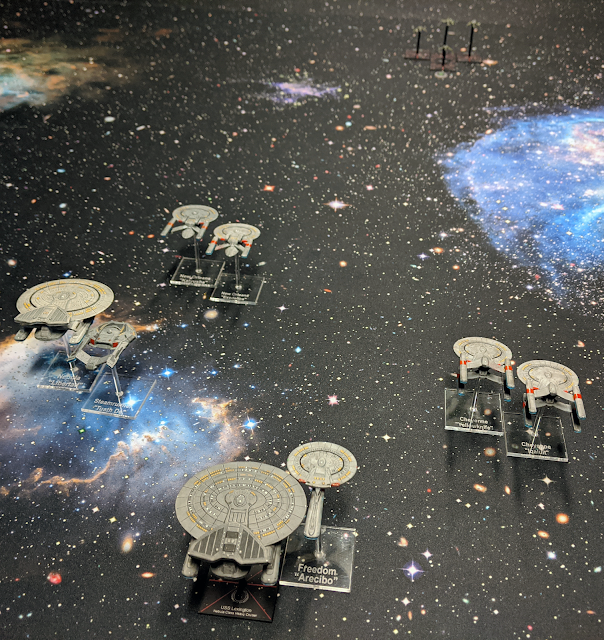 At long range Starfleet began salvo firing their torpedo launchers at the Qeh'Ral Dreadnought with the Klingons doing the same in return against one of the Cheyennes. Neither side achieved much success with the Klingon torpedoes intercepted by accurate phaser fire and the Qeh'Ral's shields standing up to the Starfleet torpedoes. 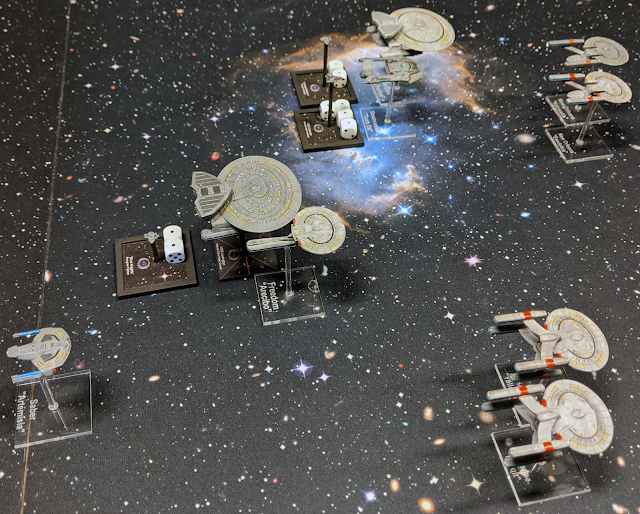 To deal with the cloaked escorts, Starfleet launched Peregrines and Danubes. 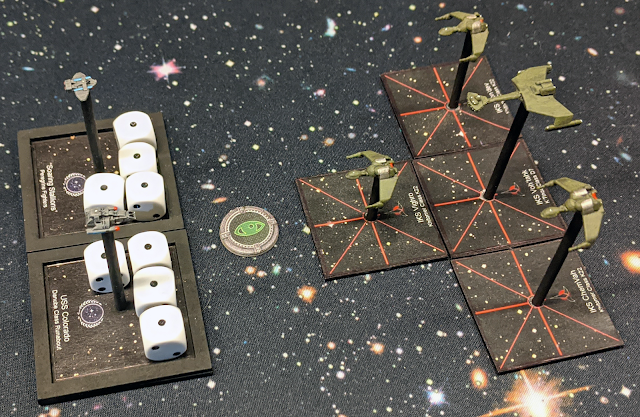 Four Peregrine Attack Fighters and four Danube Runabouts intercepted the K'Tinga and B'Rels. These ships were forced to drop their cloaks for fear of the Starfleet small craft chasing them down and firing on them without shields. Using disruptors and torpedoes the Klingons managed to destroy the Peregrines but the Danubes made it to their targets. Over the next minute all four Klingon ships were destroyed.

This left only the Vorcha and the Qeh'Ral facing an entire fleet and the Qeh'Ral's forward shields were on the brink of collapse from the torpedo bombardment. In the finest traditions of the Klingon Empire these two ships did not waiver, instead they pushed their impulse engines to the max and fired every disruptor and torpedo tube they had at the two New Orleans Frigates destroying them quickly. In return a massive wave of burst fired photon torpedoes and phaser strikes left only atomized dust where once flew two ships.

These battles brought the campaign to day 72 and upon the input of data and results a terrible discovery was made. The confidence of the Federation Council that Starfleet could achieve victory had slipped to 39.76%. The victory conditions for the campaign stated that if the confidence dropped to 40% or below before turn 60 then Starfleet loses. The campaign was over.

26 turns of grinding, fighting, pursuing annoying Birds of Prey, and chasing tails led to the Federation Council asking for peace. Right as Starfleet had finally mobilized and was on the verge of pushing the Klingons back. An analysis of the force disposition and deployment showed that the next turn Starfleet would have been reconquering lost systems and raising the confidence score. The campaign came down to one turn, to one lost frigate even. If one of the two New Orleans Frigates had survived the campaign would have continued. That close.

The only thing left to do was figure out which of the two Klingon players had won.

General Korath had conquered Carraya, Adelphous, and Acamar. He had destroyed one Defiant, one Excelsior, one Miranda, and two New Orleans.

However, General Antaak had requested significantly more reinforcements than General Korath. Apparently, House Antaak could only achieve those impressive results with outside help.

Adding up the honor scores for the two houses, House Korath finished the campaign with an Honor of 48 while House Antaak had an Honor of 55. General Antaak would have a statue of himself erected outside the great hall and songs sung in his name. General Korath would have to make do with several barrels of 2309 Blood Wine.

Thank you to Adam, Phil, and Chris for playing my little game. It is always fun to watch players dance around a map blindly attempting to "win" a contest with somewhat nebulous conditions. All three were great sports and had a great time. There will be more campaigns coming soon with the next one possibly being a cross universe adventure.

The rules for the tactical gameplay is Metaverse second edition, as yet unreleased. The first edition can be found here.