Skip to main content
Labels
Posted by Man For All Seasons May 19, 2021

Hello everyone, as I have promised of late, I have started a new period. I have long been fascinated by the dark corners of Star Trek history from the years of the Enterprise-C to the Earth-Romulan War. We came tantalizingly close to that war in Enterprise; if only it had not been cancelled.

When thinking about modelling this obscure part of Star Trek lore (visually anyway), it can be a daunting prospect. Of course the one side of the conflict is the Romulans which do not pose a problem. However, the other side is a coalition of Earth, Vulcan, Andoria, and Tellar Prime. That is potentially a lot of starship classes, paint schemes, and research to be done.

Yet, I have already set myself the goal of modelling the Dominion War 200 years later which has six factions, so this shouldn't be a problem, right?

Beginning this project became a closer reality last fall when I acquired a resin 3D printer. This allowed me to source many of the required models myself and only filling in gaps from Shapeways or other sources when necessary. Having scoured the depths of the internet (really just Thingiverse) for relevant .stl files, I devised my plan. I would start with United Earth.

1st Fleet of the United Earth Starfleet circa 2160 as designed in Metaverse Second Edition.
My United Earth navy is viewable publicly here.

The fleet I planned out would  consist of 31 starships and represent a significant portion of Starfleet's combat power at the time. Sourcing the .stl files or commercially available models was the easy part of this project. The difficult part was the research. I knew there would be NXs just like Enterprise, however, other classes and even the names of classes seen on screen required delving into the murky waters of Beta Canon (I know, I know). 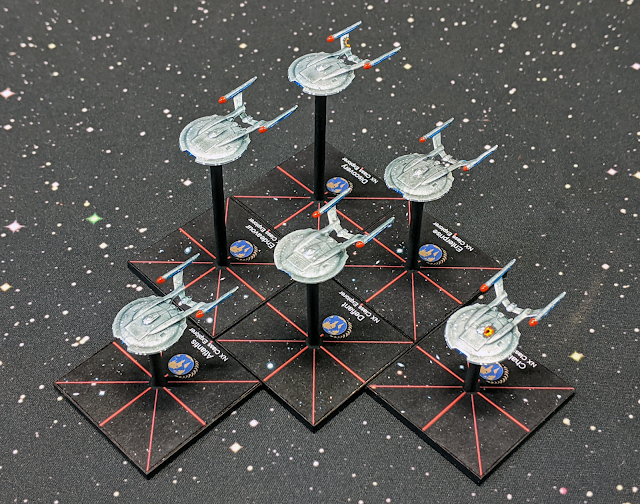 The most recognizable part of the fleet are the six NX Class Explorers. Enterprise, Discovery, Endeavour, Challenger, Atlantis, and Defiant form the core of the two cruiser wings of 1st Fleet. 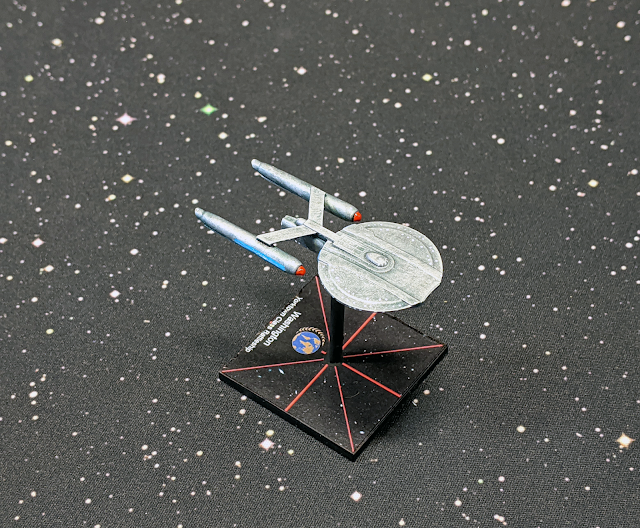 For the flagship of the fleet I first considered using Enterprise, it seemed appropriate. When doing research into Beta Canon, mostly derived from a licensed novel series about the Romulan War, I discovered the Yorktown Class. This battleship saw service in the latter half of the 2150s and I inferred it as a reaction to the Xindi Conflict earlier in the decade. The Washington is considerably larger than the NX and I assume much more expensive. Whether that expense is worth it will be answered once I have Romulans for it to fight. 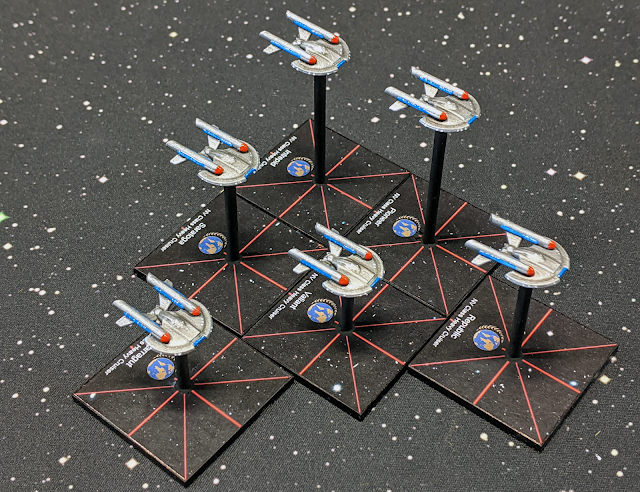 Backing up the NXs in the two cruiser wings are six NV Class Heavy Cruisers. The NV can be seen on screen on a few occasions in Enterprise and appears to share a technology base and design aesthetic with the NX. Memory Beta lists this ship as the Intrepid Class Light Cruiser. Here I took some artistic liberty and assumed that as a sister design to the NX that she also had a alphanumeric designation and was only christened Intrepid Class after the forming of the Federation. This happens too with the NX turning into the Columbia Class in Federation service. I also felt she better fit the description of a heavy cruiser. Argue with me if you like but its all made up in the end anyway. The Republic, Saratoga, Pioneer, Intrepid, Farragut, and Valiant are heavy cruisers to me. 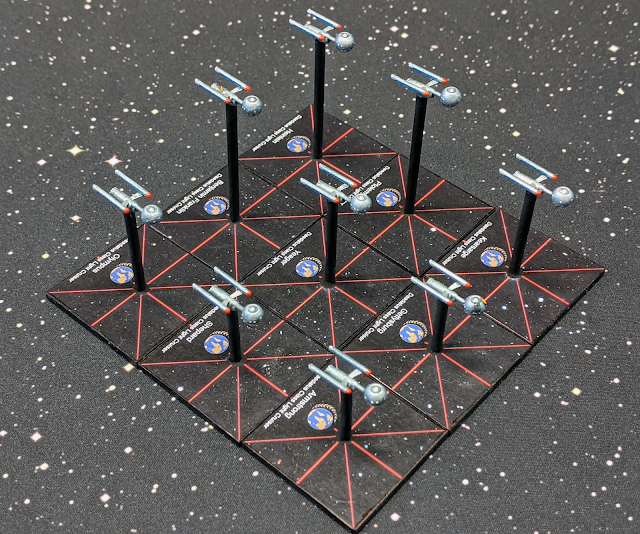 Long known to Star Trek fans, the Daedalus Class Light Cruiser is a favorite of mine and at least 25% of the reason I wanted to do this period. In recent years depictions of the Daedalus have circulated in the styling of the NX class, an obvious retcon, but a retcon that served it well. Nine Daedalus, Armstrong, Gettysburg, Shepard, Olympus, Yeager, Kearsarge, Heinlein, Ptolemy, and Benjamin Franklin form the core of the two screening wings of 1st Fleet. 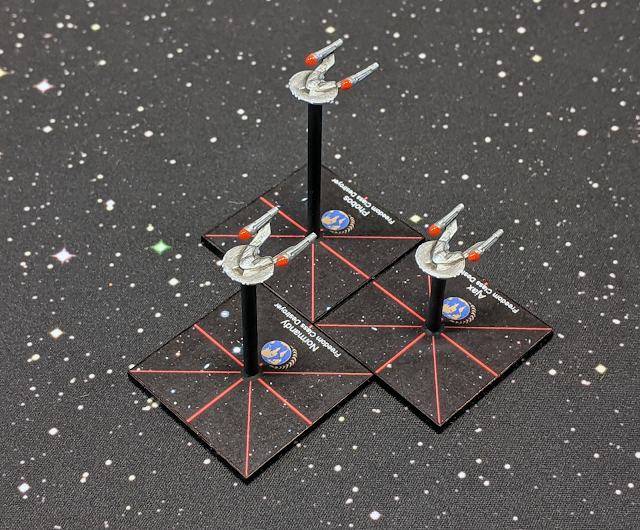 First seen in Star Trek Beyond, the Freedom Class Destroyer is a strange little ship but nonetheless canon to the period. Based on its size and potential armament I deemed the Phobos, Normandy, and Ajax as destroyers and placed them in the screening wings of the fleet. 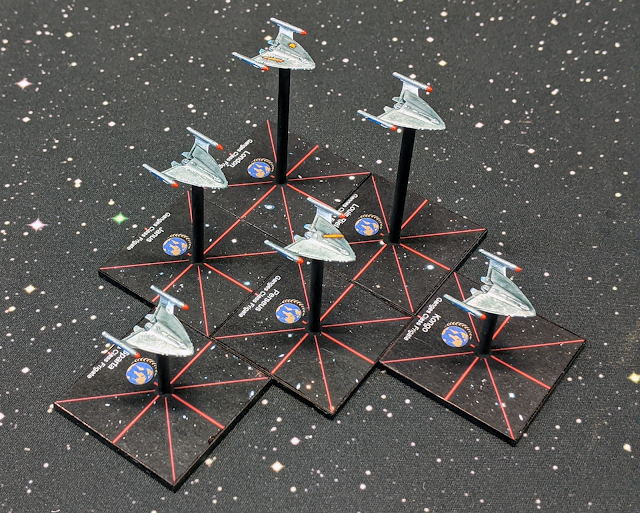 Easily overlooked in the battle scenes of Enterprise, the Ganges Class Frigate is an older design that still has a role in the screening wings of the fleet. The Louis Riel, Janus, Sparta, London, Perseus, and Kongo lasted long enough to see Federation service for a short time but even during the Romulan War their age and inferior technology was showing.

Whilst assembling and cleaning, a couple of models suffered some damage and I was instantly hit with inspiration. Seeing as this war takes place long before replicators (except for maybe the Vulcans) and the brutal nature of the conflict, I decided to experiment with active battle damage. 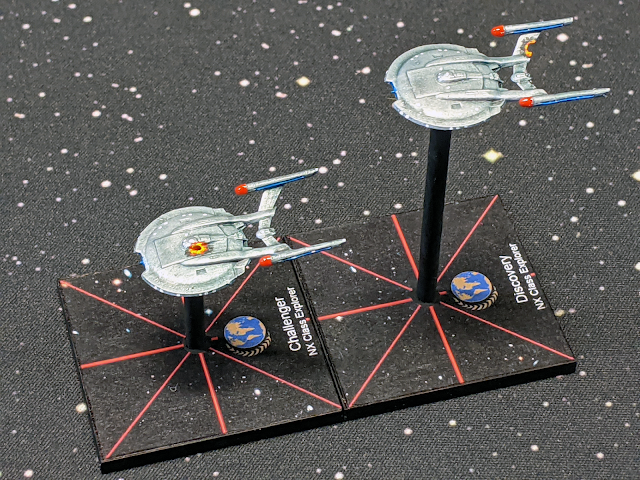 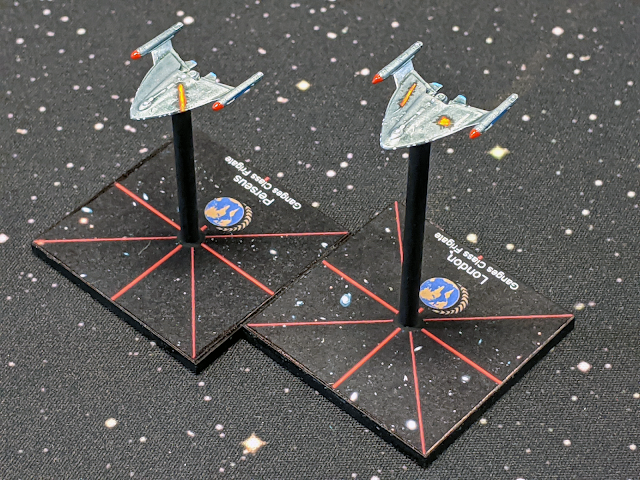 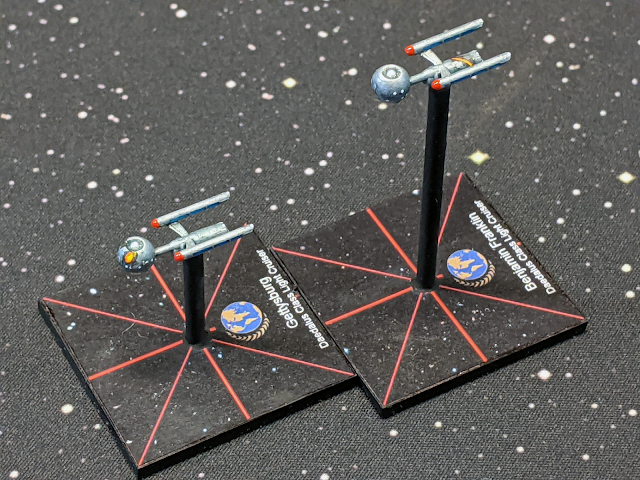 This has been one of the few times where I have been able to start and complete an entire fleet in one go. I actually prefer it this way, though I say that with only 31 models. My Dominion War Starfleet has 112 ships planned out, bit of a different beast. With one of the five factions complete I think I can convince myself that I am 20% complete the project.

I also know that I will want to do other factions beyond those such as Klingons, Xindi, Suliban, Orion Pirates, etc. But for now I will pretend they don't exist.

As a teaser for what is coming next: 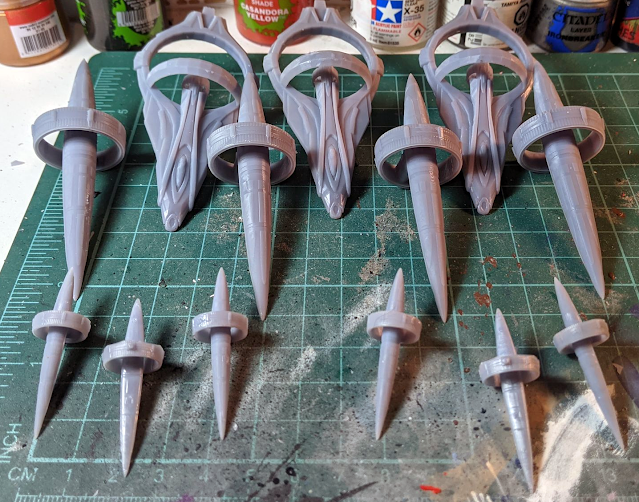