Skip to main content
Labels
Posted by Man For All Seasons May 11, 2021

Hello again everyone, work has taken me away from my hobby desk as of late; the pandemic seems to have done the opposite of decrease work in my little corner of the universe. I am now back and recently have been itching to get some output on the go and it seems that my Star Wars kick still isn't finished.

Faced with a plethora of choices with which to apply my brush, I picked through the models for a galaxy far, far away. The good/bad news is that there are no more in that particular pile (until I order more/print more). The other good/bad news is that my planned out fleet lists are nearing completion. If I want to do more I will have to do other factions. I suppose I could do Pirates, Hutts, Mining Guild, Mandalorians, or even go backwards to the Clone Wars. I guess I am not done with Star Wars yet. 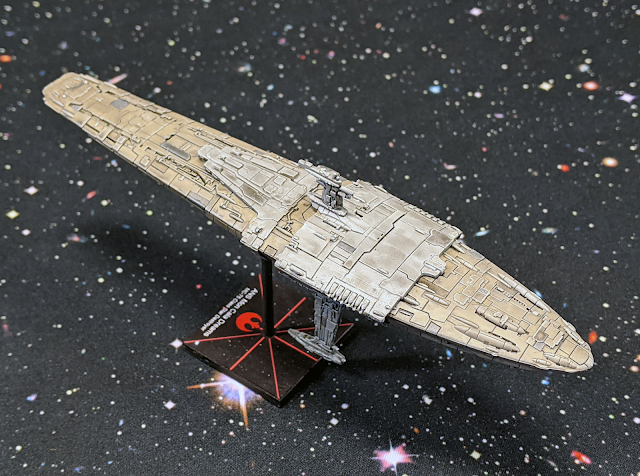 This model is from Star Wars Armada.

I always intended for an MC75 to be the flagship of my Rebels, in this case the ANS Mon Cala Dreams. I actually received this model months ago but just didn't want to be finally done with it, it looked like it would be a joy to paint. And it was. As with most of my Rebel ships, I went for a dingy used look. I believe that in a universe of mostly grey ships, what stands out about the Rebels is that their ships look like they haven't seen a drydock since they were launched. 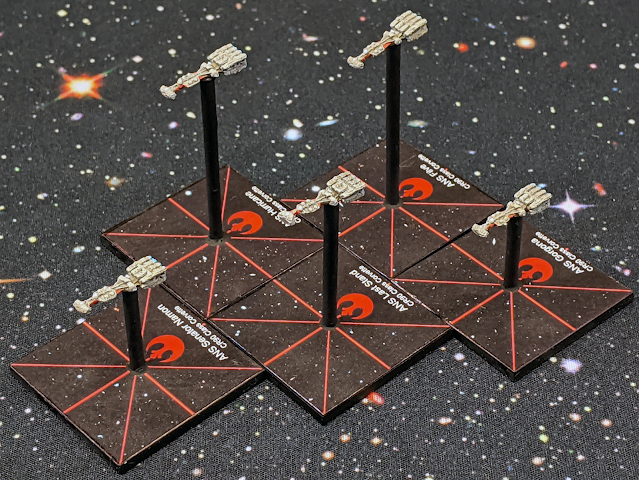 While I was away for work, a package from Utar Ships arrived. In that package were some odds and ends to fill out some classes in my fleets. Prior to now, I had 8 CR90 Corvettes in my Rebel fleet. However, the fleet list I created called for 13 so 5 more it is, the ANS Senator Namon, Last Stand, Gorgona, Filve, and Hurricane. I should never have to paint a Corellian Corvette again. Until I do Pirates or something. 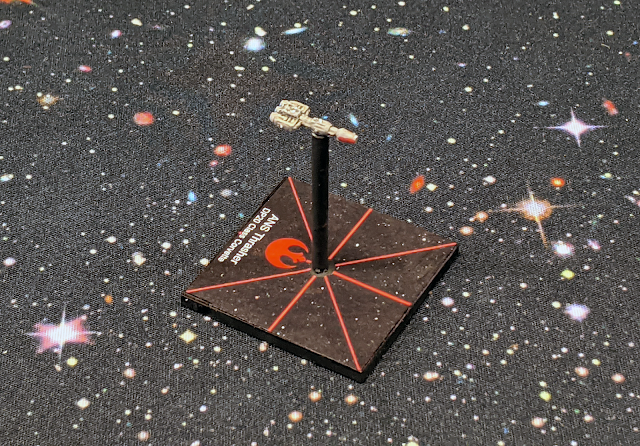 My last order from Tom at Utar Ships was short one DP20 Corvette, my fault not his. Now I am not short anymore. The ANS Thrasher joins her two sister ships in the Rebel fleet. 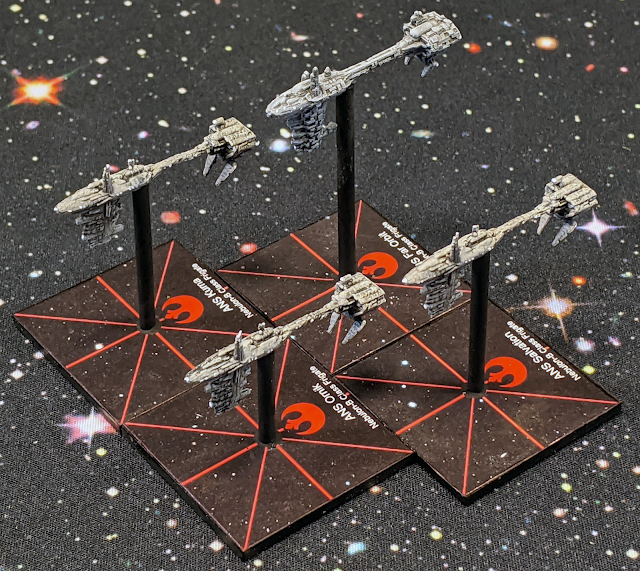 The ubiquitous Nebulon-B Frigate. Previously I have ordered this ship from Mel Miniatures on Shapeways and been impressed by its detail. However, the cost of printing this ship in the quantities I required was high and I never found an STL file of sufficient detail to print it myself. Tom did have one on his site for noticeably cheaper prompting an experimental order. I wish I had ordered from him sooner. The ANS Ornik, Kuma, and Salvation join the Far Orbit. 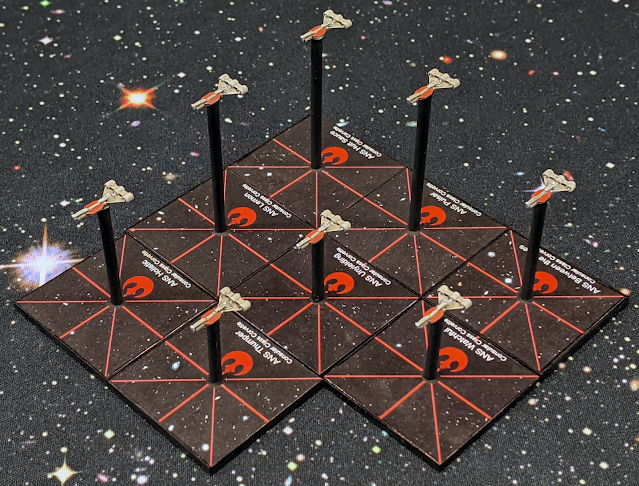 This model is self 3D printed.

One of the last corvette class ships I needed for the Rebels was the Consular Class. I had planned on ordering them online but luckily found a decent STL file. The result is satisfactory for the size of miniatures and I shouldn't need anymore. The ANS Unyielding, Watchful, Pulsar, Between the Lines, Holistic, Thumper, Lemon, and Hutt Sauce join the Rebel ranks. 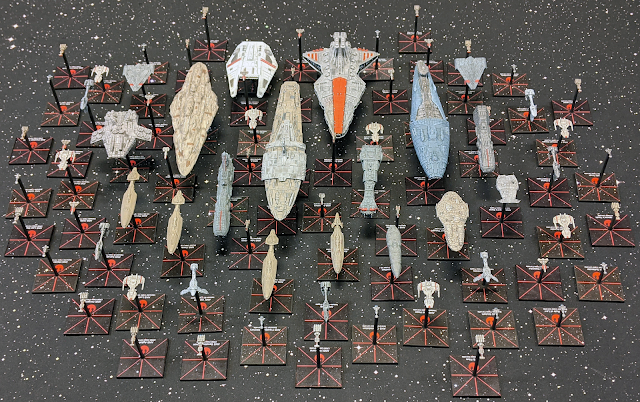 My Rebel fleet has grown considerably from its humble beginnings just a few years ago. I only need 16 more models to complete the plan. 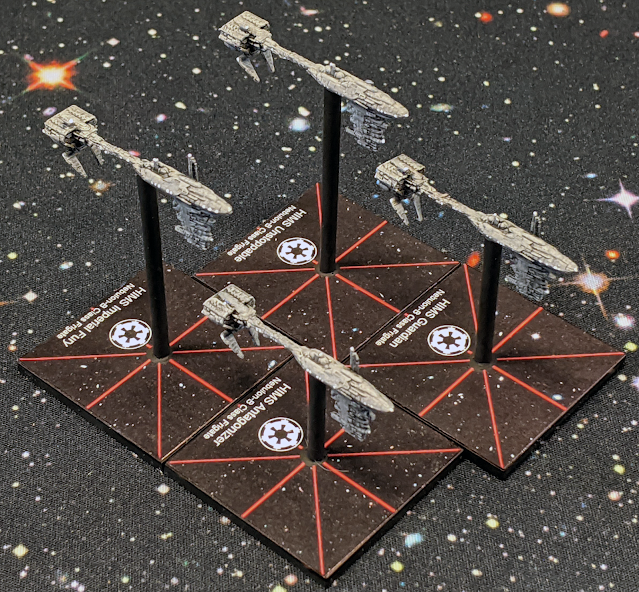 The Imperials also needed a few more Nebulon-Bs in their ranks. The HIMS Antagonizer, Guardian, Imperial Fury, and Unstoppable bring me up to 8 Nebulon-B Class Frigates. 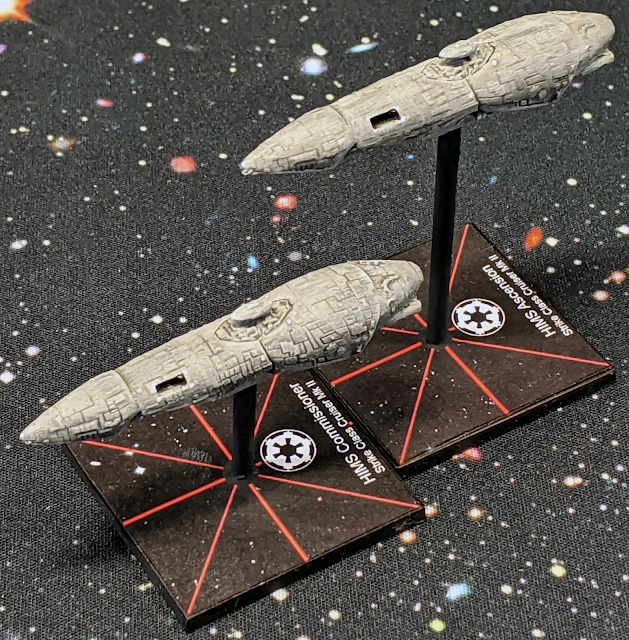 A glaring hole in my Imperial line-up for some time has been the venerable Strike Cruiser. Growing ever more common in the later days of the Empire and post Endor, this medium ship should be seen in nearly every engagement above frigate/corvette skirmishes. The HIMS Commissioner and Ascension are both Mk IIs, their hanger bays visible on the port forward hull. 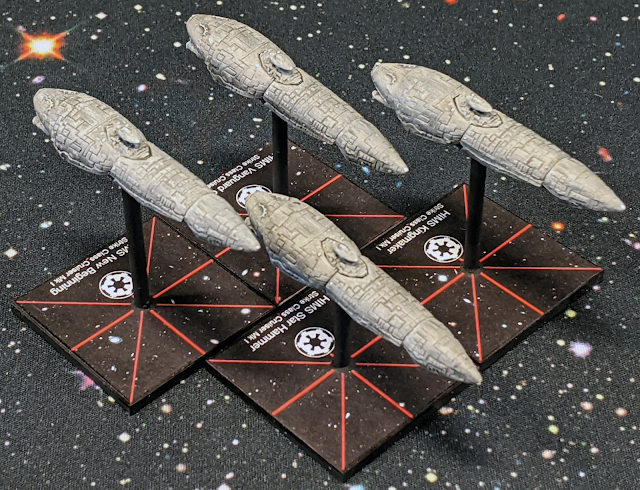 Completing the squadron of Strike Cruisers, the HIMS Star Hammer, Kingmaker, New Beginning, and Vanguard of Truth bring the total to 6. 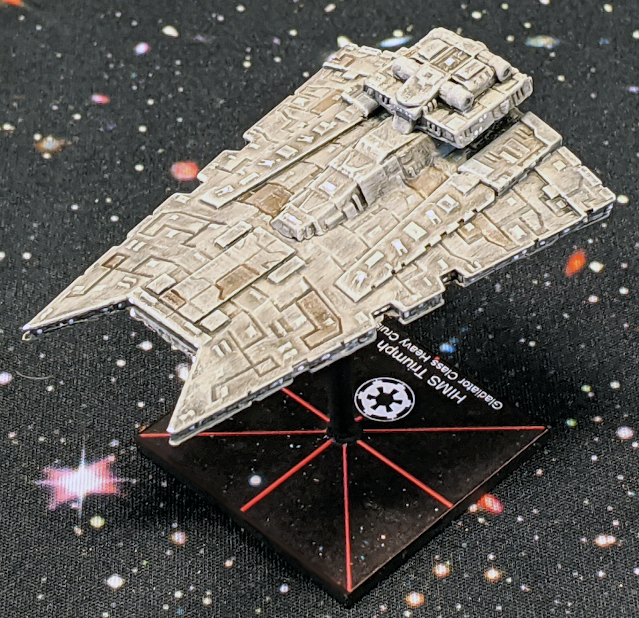 Common in the years before Yavin and seeing limited service for years afterwards is the Gladiator Class Heavy Cruiser. The HIMS Triumph is unique in its weight category as it carries extensive hanger facilities and should prove useful as a flagship for small scale engagements.

The ordered ranks of the Imperial fleet have grown into a behemoth of firepower (and more models than I will every reasonably use in any given game). And yet, there are still 16 models yet to acquire and paint, but the end is in sight.

Coming next is likely a foray into the Earth-Romulan War from Star Trek's early history. I have already printed much of what I needed for my planned United Earth fleet. A few odds and ends are in transit from Shapeways and should arrive imminently.