Skip to main content
Labels
Posted by Man For All Seasons January 15, 2017

After a brief respite, and a clearing of the table, AJ and I setup a game of 18th century Imaginations. For those unfamiliar with the concept, an Imaginations game entails playing with fictional forces in an historical period, in this case the 18th century. Having got out of our system the need to play something truly fantastical earlier in the day with some Star Wars starships, this game provided for the need to play something more traditional. Accompanying the game would be fine wine, Bach, and cigars for the debrief. As I am still completing my forces for the fictional nation of Nordstrum, we would be using my Father's collection. He has this convenient habit of leaving his figures in my gaming bunker. His excellent blog can be seen here: http://spqrdave.blogspot.ca/ 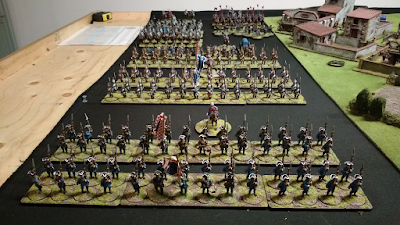 AJ chose to command the forces of Das KaiserReich. This German Protestant force consisted of a Musketiere Brigade, a Fusiliere Brigade, a Grenadiere Brigade, a Cavalry Brigade, and a Light Brigade. The unique facet of the KaiserReich forces is the size of their infantry battalions, at 28 figures they are considered large units with bonuses to firepower, melee, and stamina. 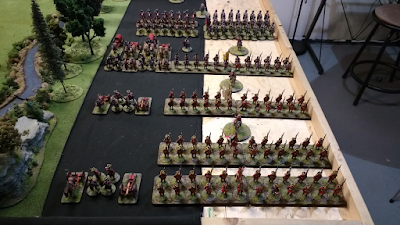 I would command the forces of Le Grand-Duche de Gourmandie. This French Catholic force consisted of two Infantry brigades, a Grenadier brigade, and a Cavalry brigade. The unique facet of the Gourmandie forces is the larger contingent of artillery and the single large Guard cavalry unit. 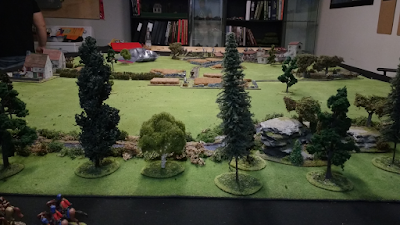 The battlefield we set up was a traditional affair featuring fields, lonely trees, village buildings, and a forested river on one flank. I like to provide a natural excuse for table edges such as forests and rivers. 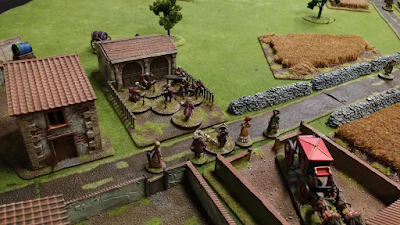 The monarch of Le Grand-Duche de Gourmandie is Grand-Duc Pierre Louis. The Grand-Duc does not lower himself to such base professions as commanding an army in the field. Instead, he brings with him a small orchestra to amuse him amidst the din of battle. He also is known for bringing his favored hounds with him on campaign as can be seen here. The command of the army is left in the capable hands of Jean Lafitte Roquefort, Marquis de Fromage. The Marquis is accompanied by the Arch-Bishop Ambroise de Chabichou du Poitou who ensures the religious and moral fortitude of the men. 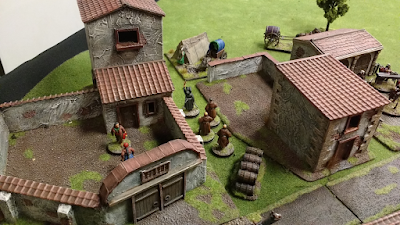 Here local priests can be found accosting a camp follower for her un-pious activities. 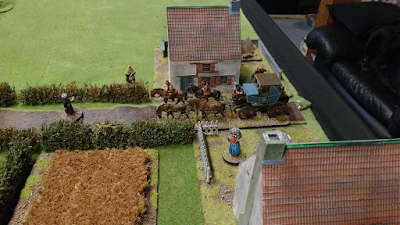 The army of Das KaiserReich is commanded by KronPrinz Friedrich Wilhelm himself who likens himself to be a professional of sorts. Here, his carriage awaits him to finish the battle while locals gawk at the display of aristocracy. 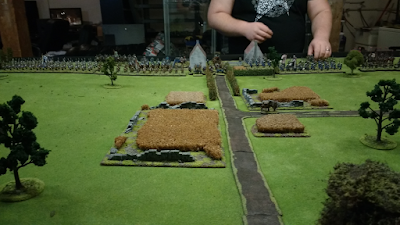 AJ arrayed the army of Das KaiserReich in a linear fashion (duh) with his heavier cavalry in reserve behind the right flank. He lamented on more than one occasion that the chosen battlefield was not suited to a sweeping cavalry flank action. 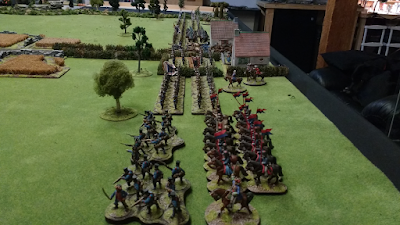 The left flank of the KaiserReich forces was anchored by the Freikorps der Jagers Radeburger and the Ulanen Radeburger under the command of Freiherr Erik Von Radeburger. 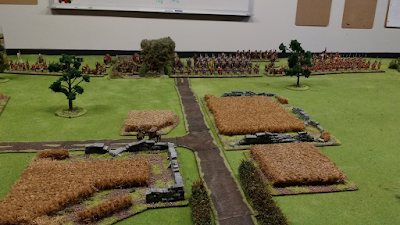 I arrayed the Gourmandie army in a similar fashion with my heavy cavalry behind my left flank opposite the KaiserReich cavalry. In the middle of the field a local farmer seems oblivious to the colorful display around him. 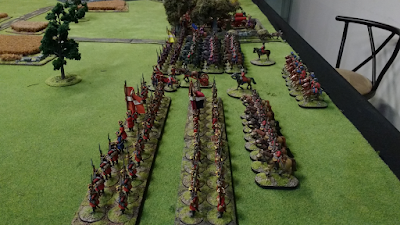 The Gourmandie cavalry nervously awaited the advance of the KaiserReich line. 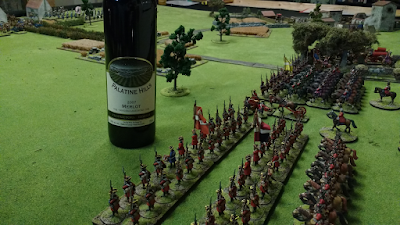 With the commencement of the battle it was time to open the wine. No 18th century battle would be complete without an appropriate vintage. 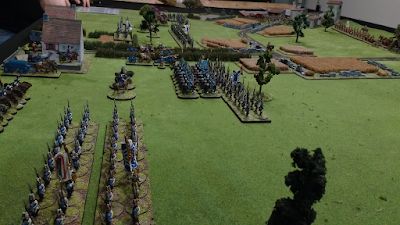 The KaiserReich forces advanced across the field in almost good order. 2. Brigade became confused by their orders (blunder roll) and stayed firmly in their starting positions. The sight of the entire army advancing without them did nothing to clear up the situation. 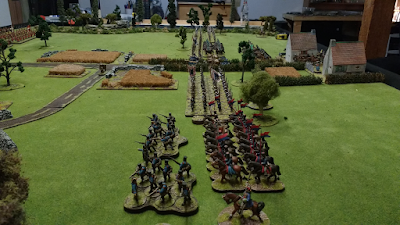 The light forces on the left flank of the KaiserReich army did understand the orders, unlike the right flank, and advanced steadily upon the godless Catholics. The Gourmandie artillery opened fire on the KaiserReich as they advanced. While the intensity of the fire did not cause considerable casualties, the disorder did slow down their advance. 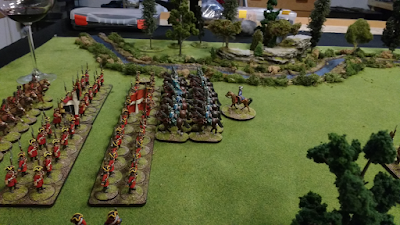 With the advance of their infantry slowed by the Gourmandie guns, the KaiserReich opted to conduct a heavy cavalry charge against the opposing line. This melee would ultimately see the Grenadiere zu Pferde Warsteiner rout the 1er Infanterie Roquefort. 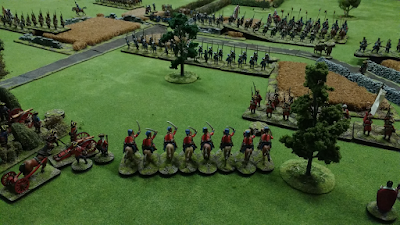 With the KaiserReichs light forces making headway on the right flank, Jean-Jaques LaPierre, Comte d'Auvergne ordered his infantry to push right. To fill in the gap in the line the Hussards Grand Duc were ordered to cover the Auvergne infantry's flank. 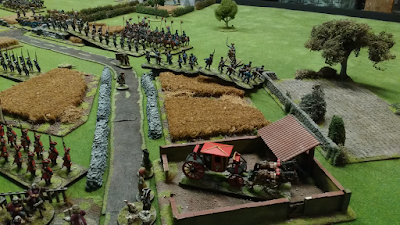 The 1er Infanterie d'Auvergne successfully halted the march of the Freikorps der Jagers Radeburger before they could over run the village. The Grand Duke payed little attention to these going ons in favor of his orchestra. 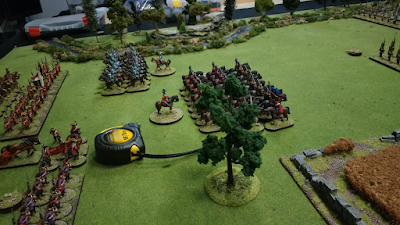 With the 1er Infanterie Roquefort routed, the KaiserReichs Grenadiers advanced in support. However, Gourmandie's Grenadiers a Cheval Boursin sallied forth and chased them back to their lines. A temporary success, this maneuver would be the end of the Grenadier Cavalry. 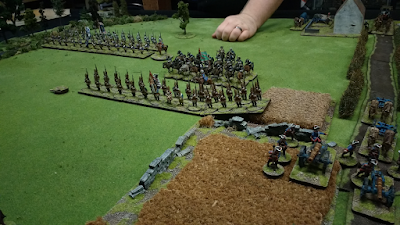 Seeing his Grenadiers falling back in the face of the heavy Gourmandie cavalry, AJ considered his options. 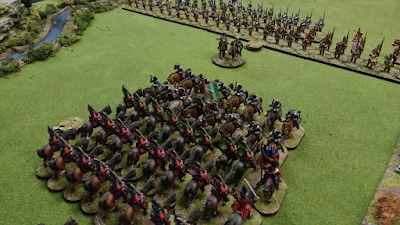 He opted for the bold move, crying "fortune favors the bold", and charged the Pistoliere von Doppelbock into the Grenadier Cavalry. Thankfully not performing their famed caracole, the KaiserReich cavalry slammed into the Grenadiers who could not counter charge due to being disordered. 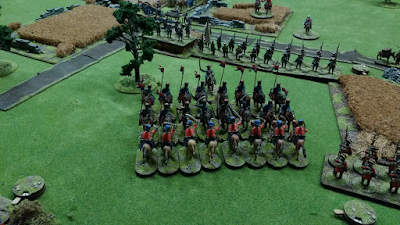 Embracing his new found courage, AJ charged the Ulanen Radeburger into the Hussards Grand Duc on the other flank. The hussars were able to counter charge. 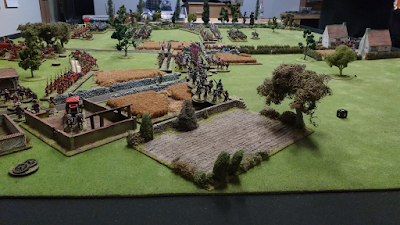 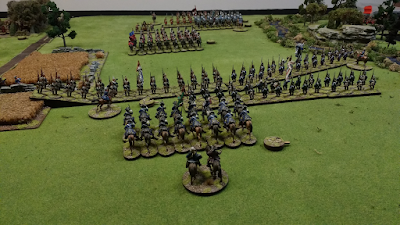 The Pistolieres did not favor well either, retiring back behind their main lines. This did leave the Grenadiers a Cheval Boursin nearly shaken and in a precarious position. With KaiserReich artillery and two infantry battalions firing into them as they impotently tried to order themselves, the Grenadiers succumbed and retired from the field. 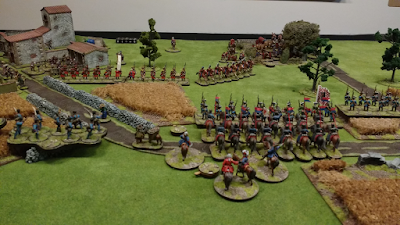 The firefight on the right flank was not going my way either and assessing the situation I adopted to honorably withdraw from the field of battle. AJ graciously granted me the dignity of withdrawing in good order. 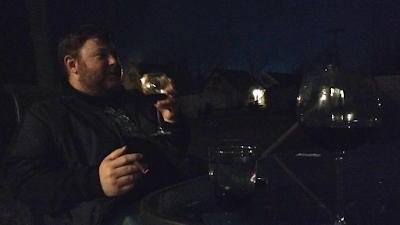 The game complete, AJ and I braved the Canadian January temperatures with our wine and enjoyed cigars during the debrief. An imaginations game is always a pleasant experience and I happily play whenever I can. AJ and I both noted that their is something quite viscerally appealing about gaming in the 18th century. We both enjoy games ranging from WWII tank fights to starships battling amidst the stars, but pushing colorfully painted infantry battalions and cavalry regiments about the field with the roar of cannons ringing in our imaginations seems both dignified and "right". Thank you to AJ for a wonderful day of gaming and I look forward to more imaginations gaming next weekend when my father arrives.