Skip to main content
Labels
Posted by Man For All Seasons January 15, 2017

Attack of the Clones

My good friend AJ was up this weekend for some gaming and he brought his very unique Clone Wars starship project. I have a Star Wars starship project for the Civil War era and have gamed with it many times but the Clone Wars is a period that I have never had the pleasure of gaming, although admittedly many of the vessels are available in the later period. AJ's miniatures are a collection of the old Wizards of the Coast products, Odyssey Slipways, Studio Bergstrom, and 3D printed models from Shapeways. He has done a fantastic job painting these up and giving the right feel from the prequel movies and the Clone Wars TV series. With little deliberation AJ chose to play the Confederacy forces granting me the Republic forces. 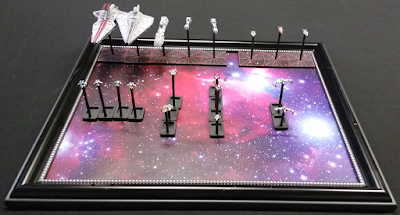 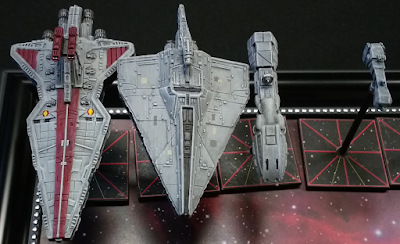 AJ did a marvelous job painting the heavy Republic ships. 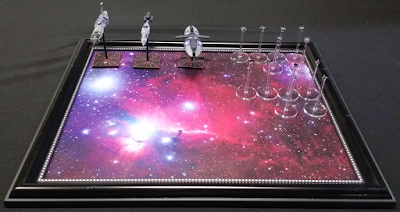 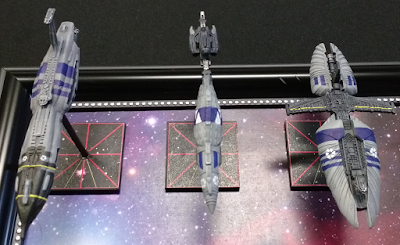 The Confederate ships were even more impressive in their blue colours. 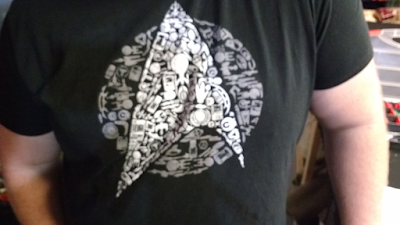 AJ wore an appropriate shirt considering the forces we were commanding. 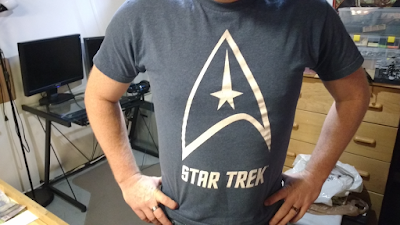 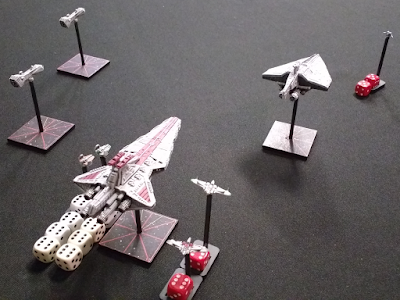 The Venator, Acclamator, and Carracks meandered slowly angled 45 degrees off from the Confederate battle line. This gave time to flush the considerable fighter compliment of the Venator off the deck. AJ did not have enough starfighter models to represent each squadron so each D6 is a squadron. The cost of the 3D printed models is high, especially to represent the entire compliment of a Venator. 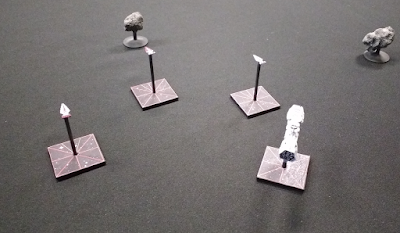 The Dreadnought and Arquitens move much faster attempting a flank around the local planet. 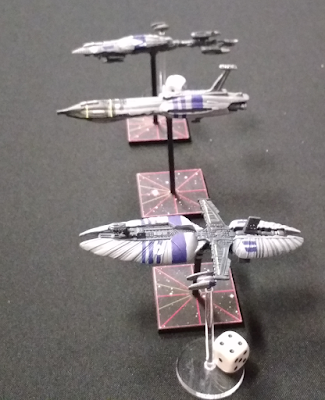 The Confederate battle line proceeded towards the Republic heavy units at a medium speed in line abreast. The Droid fighters began to empty out of the Star Destroyers. 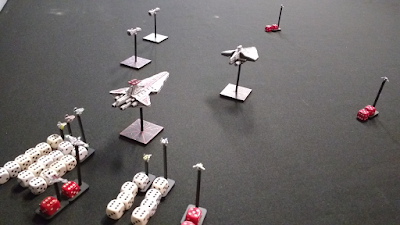 The Eta-2 Actis' are all off the deck of the Venator with the V-Wings following close behind. The LAATs, loaded with concussion missiles, I deemed to make an appropriate screen against the swarms of droids. While terrible dogfighters in space, their ordnance would allow me to thin the herd somewhat. As it turned out AJ played his starfighters conservatively making the exercise redundant. 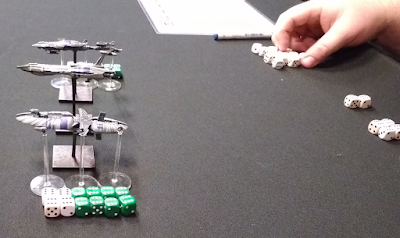 AJ kept placing more and more dice to represent the Droid fighters. From my perspective it looked daunting. 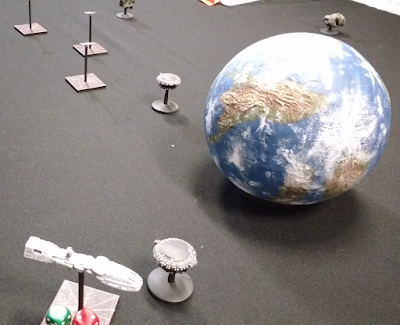 The Dreadnought hooked right to cut inside of the planet and began a straight run on the flank of the Confederate line. At this point the Dreadnought was moving a whopping 1/4 light second per turn! 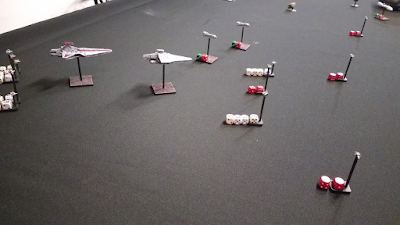 The Carrack cruisers accelerated and turned to face the big Confederate ships allowing both their broadsides to bear. These little ships can dish out quite a punishment compared to their size; unfortunately as soon as the enemy so much as sneezes in their direction they disintegrate into clouds of interstellar dust. 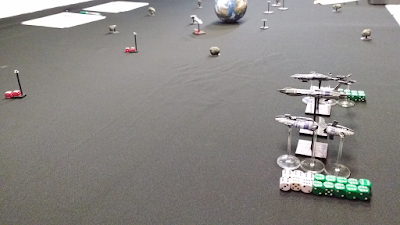 The Droid fighters had almost completely formed up by this point. It looked like it would be a Herculean task to overcome them. The long range turbolaser and ion cannon fire between the fleets intensified as the range closed. The Republic fleet concentrated fire on the front of the Munificent. I deemed this to be the most important target due to its considerable electronics suite. The Acclamator, a mark II with a heavier turbolaser armament, scored a flurry of hits well beyond the expected number. The Munificent's bow shields collapsed and the armour began to melt away. 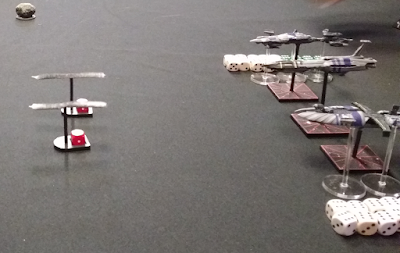 In response to the Republican insult, the Confederate ships returned fire on the Acclamator nearly collapsing her shields. The Providence unleashed her armament of long range concussion missiles. 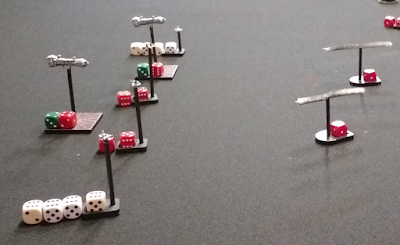 The Carracks, V-Wings, and LAATs were nervous as the missile salvos closed the range. I was convinced that AJ would use the concussion missiles against my screen to further tip the starfighter balance in his favor. 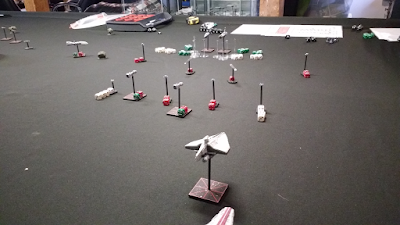 As the turn closed AJ had to roll multiple criticals on the Munificent. At first only some weapons and secondary systems went offline but then an unfortunate roll saw the entire front of the ship disintegrate. This caused a further critical roll on the core of the heavy cruiser. With anticipation I watch AJ roll the dice. AJ's face slumped and I grinned as the Munificent's core reactor went critical. The ELINT advantage of the Confederates had just disappeared in a hypermatter explosion. 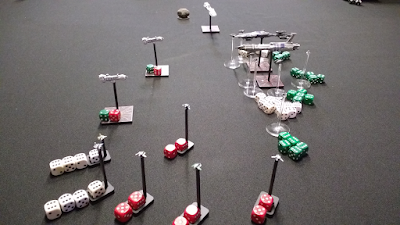 Following that series of unfortunate events, I continued to press the attack with my Carracks and my Dreadnought screaming into close range. The Republic weapons fire, while not ineffective, failed to live up to the previous turn's miracle. The Confederate fire, seemingly out for revenge, collapsed the Acclamator's front shields and tore away the nose of the ship, taking with it the majority of the Quad Medium Turbolaser batteries. Almost as an after thought, secondary fire destroyed one of the Carracks. AJ continued to play his droid fighters conservatively. As it turned out, AJ chose to have his concussion missile salvos fly past my light screen and head for the Republic capital ships. 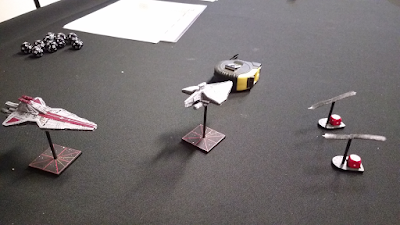 With the Acclamator leaking plasma fire, smoke, and clones, I turned her away to bring to bear a still shielded arc; the forward shield generators had evaporated under the intense fire. The Venator turned to face the Confederate ships. Turbolaser and Ion Cannon fire poured across the vacuum hitting the Providence and the Venator. The Venator's shields held, barely, while the Providence had her's collapse and hull begin to melt away. With the Dreadnought and Arquitens concentrating on the Recuscant at close range, AJ threw in the towel.

The debrief over beer at noon decided that the game was decided by two factors: the Acclamator will need to promote its chief gunnery officer for an amazing display of disciplined fire, and the Confederate starfighter operations officer will need to be fired for incompetence. This was my first experience with Clone Wars era gaming, an experience I will be happy to repeat in the future.

The rules we used can be found here: http://battlespacepublishing.ca/