Skip to main content
Labels
Posted by Man For All Seasons February 04, 2017

Good morning friends and gamers! Having just finished up my new Galactic Empire models this week I asked Adam if he wanted to come down for a game on Friday. As I had also finished up another batch of commissioned Starfleet models for him we elected to field a game of all new models. It was our hope that this would mitigate the 'curse of the new model' that all of us gamers are familiar with. As it turned out the gaming gods simply picked a side.

The Imperial force that I fielded was comprised of the following:

I intend to write up a post detailing these new miniatures this weekend. You will note that I have adopted a convention of naming the truly small Imperial vessels with a number and letter code. I feel this is sufficiently inhuman and bureaucratic for the Empire.

The Starfleet force that Adam fielded was comprised of the following:

Adam explained that he had imagined this force as a pair of science vessels investigating a wormhole like effect with a squadron of escort vessels assigned to them for defence should the worst happen. Little did they know that the wormhole lead to an outer rim system in the Galactic Empire. 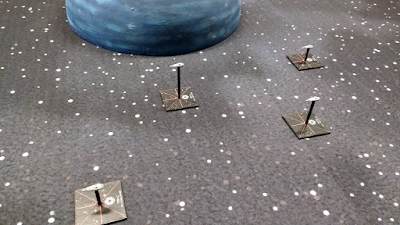 The local defence force for this remote system was a squadron of IPV-1 Corvettes, sometimes called patrol vessels. The IPV-1 is lightly armed and has no hyperdrive but is sufficient for chasing off pirates and smugglers. 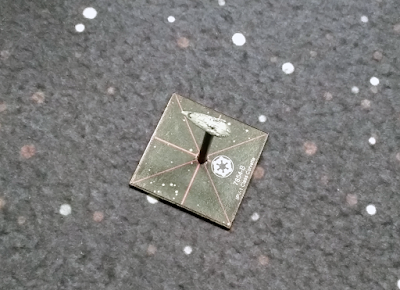 These tiny vessels would be facing something more than smugglers this day, Science Vessels! 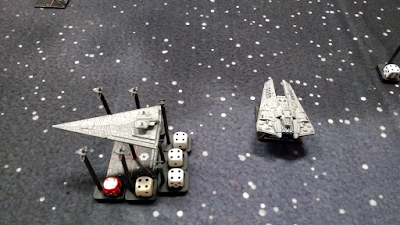 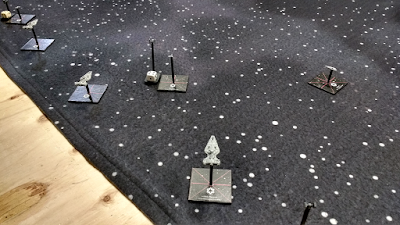 Of the 10 starships in the squadron, 8 of them were corvettes. This grouping was clearly designed for chasing down Rebel Scum not science vessels in the cruiser range. 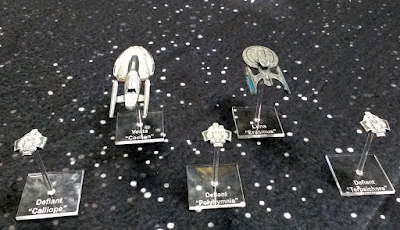 The Starfleet squadron looked menacing even though outnumbered by the numerous Imperial corvettes. The three Defiants particularly caused a lump in my throat. 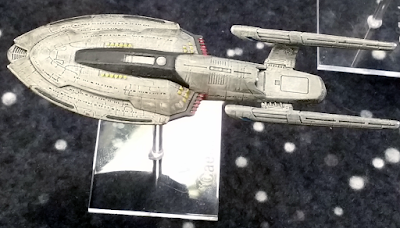 Had I not known that the USS Caelian (Vesta Class Explorer) was a science vessel, the fact that she was nearly the same size as the Imperial heavy cruisers would have forced me to pause. 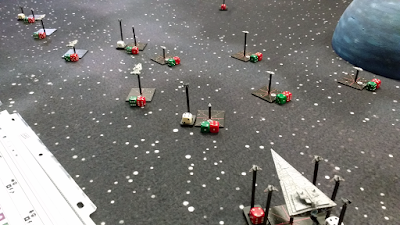 The bulk of the Imperial forces began the game by heading left around the local gas giant. The numerous corvettes, including the IPV-1s, did their best to perform some evasive maneuvers. The Starfleet task force charged straight towards the Imperials at 3/4 Impulse. 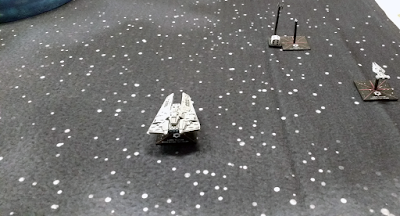 The HIMS Thunder (Broadside Class Heavy Cruiser) along with a Gozanti and Arquitens Class Corvette maneuvered around the right side of the gas giant hoping to bring the Thunder's sizable missile battery into the flank of the Starfleet ships. 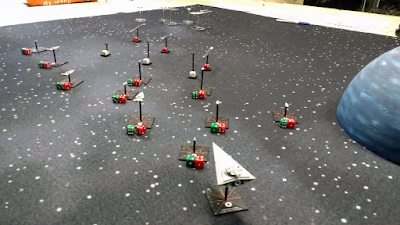 Opening fire from the two sides resulted in the HIMS Venom (Arquitens Class Corvette) having her forward shields flicker while the USS Erasmus (Luna Class Light Explorer) shrugged off some turbolaser fire. The Imperial corvettes unleashed some salvos of concussion missiles that would take a couple of turns to cross the gulf between the lines. The evasive maneuvers of the corvettes payed off as not a single quantum torpedo connected. This is also where I learned that all the torpedo tubes on the Starfleet ships launched Quantum Torpedoes, oh joy! 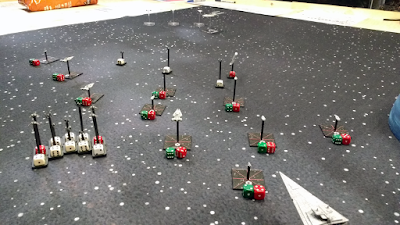 As the lines drew closer the fire intensified with the HIMS Peremptory (Vindicator Class Heavy Cruiser) entering range. This small ship by Imperial standards, carried 20 Quad Light Turbolaser batteries along with a smattering of ion cannons and laser cannons. A devastating barrage of fire from these batteries (17 out of 20 batteries hit, nearly double the expected number) crashed into the port shields of the USS Erasmus (Luna Class Light Explorer). The shields held for the briefest of moments and then collapsed leaving the hull bare to the torrential energies being tossed across the void. Turbolaser fire continued to pour into the hapless Science Vessel melting Duranium plating until finally the green bolts of death continued through a cloud of vaporized metal. The two halves of the Starfleet vessel drifted slowly apart. 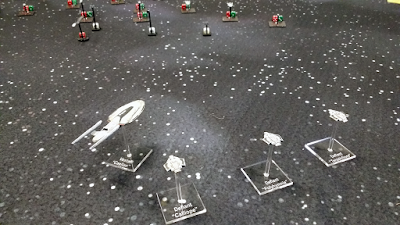 In an angry response the Starfleet vessels poured fire into the nearest corvettes, the HIMS Venom (Arquitens Class Corvette) and the 13655-C (Gozanti Class Corvette). Corvette 13655-C was removed from the universe in a judicious manner while the Venom had her shields brought down and her structural integrity fall below 50%. Amazingly, the little corvette managed to keep itself together through the many critical rolls and continued to fight, though ensuring to turn a new shield arc to bear. 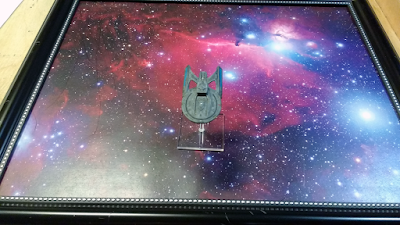 The USS Erasmus was returned to the reinforcement/dead tray for the remainder of the game. 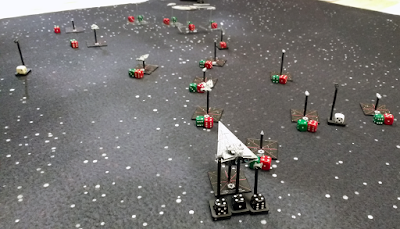 The Imperial squadron, high on its successes pushed the advantage and closed the range. However, the Starfleet ships turned to starboard and a power buildup was detected in their nacelles. Desperate to continue battering the fancy Starfleet ships before they jumped, the HIMS Peremptory (Vindicator Class Heavy Cruiser) switched targets from the expanding cloud of debris to the USS Caelian (Vesta Class Explorer). This Science Vessel was a bit bigger than the last one and a bit tougher to bring down. The port shields lasted longer than last time and the remaining green bolts of plasma that managed to hit the hull were absorbed by ablative armour. It appeared that Starfleet had learned a few lessons from the Dominion War! The rest of the fire from the two sides spattered on each others shields with nothing of note occurring.

At this point the Imperials had guessed that the Starfleet commander would tactically jump his ships across the table to get out of the front arc of the Imperial heavy cruiser. When the Starfleet ships jumped, however, they jumped off the table in a strategic jump with the intention of jumping back in somewhere else on the table.

The Imperial ships loitered for a short while regenerating their damaged shields, as presumably the Starfleet ships were also doing a light minute away. Suddenly the sensor officer on the Imperial command ship reported a strange energy reading to aft-starboard. The Imperial ships rushed to come about with fighter groups converging on the expected entrance point. Most importantly the HIMS Thunder (Broadside Class Heavy Cruiser) was in position to unleash its missiles at the soon to be present Starfleet ships. 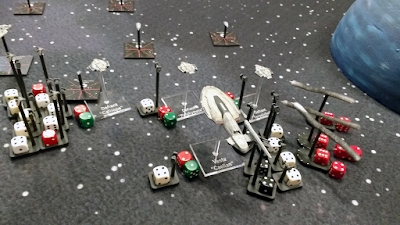 When the Starfleet ships re-entered the battlespace they flew right into a kill zone. Waiting for them were two squadrons of Tie Fighters, one squadron of Tie Interceptors, one squadron of Tie Bombers, one squadron of XG-1 Star Wings, a barrage of concussion missiles from the HIMS Thunder (Broadside Class Heavy Cruisers), and the combined turbolaser firepower of the rest of the squadron. A keen observer will note that the USS Caelian (Vesta Class Explorer) was missing its port nacelle, the result of an unfortunate slip of the hand off table. This would prove to be prophetic. 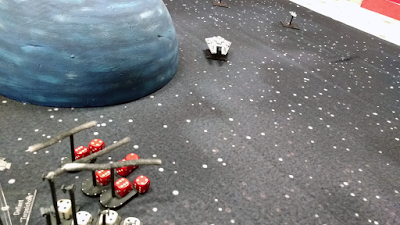 The Starfleet ships jumping into this kill zone were quite pooched, with the HIMS Thunder to their starboard... 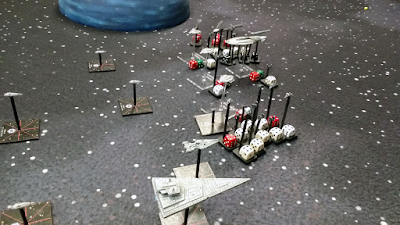 and the HIMS Peremptory to their port their was little chance of getting out. 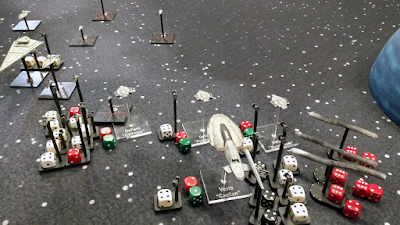 Turbolaser batteries from the HIMS Peremptory (Vindicator Class Heavy Cruiser) poured into the port side of the USS Polyhymnia (Defiant Class Destroyer) collapsing her shields but failing to penetrate her ablative armour. The meek fire from the Imperial corvettes did little to change this outcome.

The Starfleet ships were in an impossible situation; Adam chose to pour all his fire into two unfortunate IPV-1s. When I asked him why he put far more firepower than was necessary into these inoffensive little ships he responded "I'm gonna get some @%#ing models off the table before I die". With little effort he did just that.

With the Starfleet ships having finished their disproportionate attack on the corvettes the starfighters had their chance. The USS Calliope (Defiant Class Destroyer) was on the receiving end of 12 Tie Fighters, 12 Tie Interceptors, and 16 XG-1 Star-Wings. The numerous laser cannons and ion cannons of this strike group just barely brought the "little ship's" port shields down in time for proton torpedoes from the Star-Wings to slam home. The ablative armour did absorb much of the damage but not enough. Bag one Defiant.

Any crew member looking out a starboard window of the USS Caelian (Vesta Class Explorer) would have seen 16 Tie Fighters and 12 Tie Bombers swarming the ship like gnats. This swarm purposely attacked the weakest shield arc on the Science Vessel, bringing them down in short order allowing the proton torpedoes of the Tie Bombers to strike home. As the Imperial fighters broke off the Caelian was a drifting hulk.

As if to add insult to injury a full barrage of 34 concussion missiles closed in on the rear of the USS Terpsichore (Defiant Class Destroyer) tearing down her aft shields and putting a few dents in her hull. Adam now surveyed his fleet; two Defiants with at least one shield arc depleted each, surrounded by Imperial ships, and Imperial fighters chasing them down. Begrudgingly, the Starfleet ships warped out of the system.

Adam and I moved to a debrief and discussed the relative strengths of the two fleets. Starfleet is theoretically powerful with highly maneuverable ships with many tricks up their sleeve (transporters, tractor beams, tactically useful FTL drives) but the right fleet composition is required to face a Star Wars fleet. While three Defiants looks menacing they actually decreased his ability to deal with the fighters due to their phasers all being in one arc. In the future a Starfleet task force will need to include some other frigates and destroyers with distributed phaser arrays and banks.

Thank you to Adam for an enjoyable evening. I will post up a review of the Imperial models very soon.