Skip to main content
Labels
Posted by Man For All Seasons February 11, 2017

Smoke on the Water

Hello again, recently Adam and I sat down to do a play test of our upcoming game called Sail, Steam, and Sky. SSS is a naval wargame that can cover any historical naval battle from the 17th century forward. This might seem like a tall order for a rule set to achieve but the game is split into three distinct eras as detailed by the name. The core command and turn order mechanic remains the same such that players need not learn entirely new rule sets for age of sail, steam, or modern games but each era still feels sufficiently different and historically accurate.

For our game we decided to pull out the WWI collection and have a blast... blasting each other with the big guns. For the scenario we pulled out of the box elements of the British and German battlecruiser groups. Adam chose the Brits and I chose the Huns.

My German group consisted of the following:

Prior to putting models on the table Adam and I each had to decide which and how many ships to dedicate to Pre-Battle Positioning. Adam applied the entirety of his light forces, three light cruisers and 8 destroyers to the task, I applied a single light cruiser and 4 destroyers. With that done we each had to determine the task we would apply each of these ships to from among Scouting, Screening, and Interference. The relative numbers we each applied to these tasks (in secret) would affect how likely we were to know our opponents formations and deployments, the level of orders preparation we would be granted, and the likelihood of our tasked forces returning to the fleet in time for the battle. The result of this maneuvering was that Adam got a decent look at my deployment (I had to deploy more squadrons than he did first) while I was able to issue a more concise battle plan as the game began. Additionally, the relative screening and interference efforts meant that four of my destroyers did not make it back to the fight while Adam's light forces nearly all made it back. This resulted in a disparity. I was left with two light cruisers and four destroyers while he had two light cruisers and six destroyers. 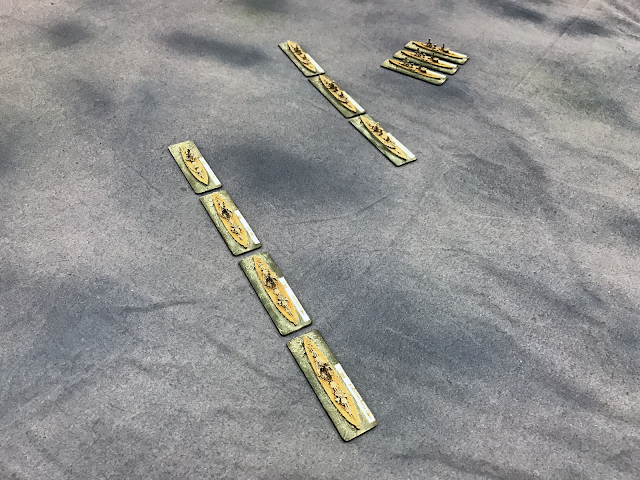 Adam began his deployment with the King George V battleships deployed in line astern with a parallel line of the Lion battlecruisers. Off to the flank were the Invincible battlecruisers in line abreast. He would later regret this initial deployment as he had accidentally put his battlecruisers on a near collision course. 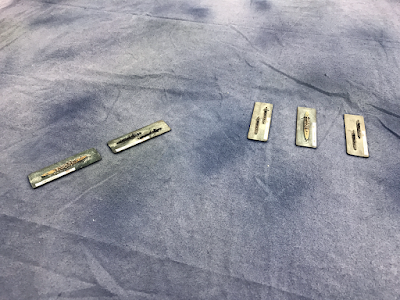 For his light forces, Adam deployed on the left flank with the intention of attempting a torpedo run at some point. 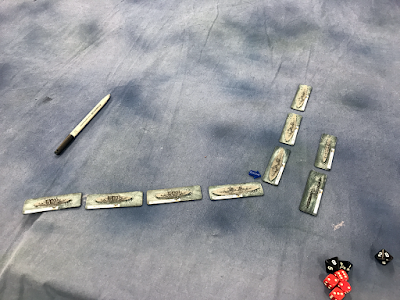 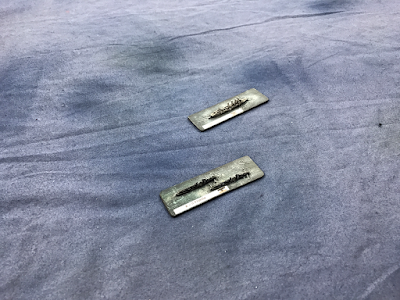 Far to the right of my battleships I deployed a lonely group of one light cruiser and two destroyers. 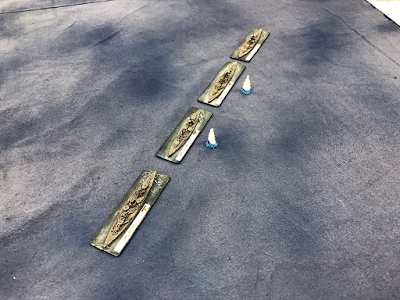 As the opening moves began the German battleship line made a turn to port to close the distance and enter gunnery range. The German battlecruisers sailed at full steam on a heading that would bring them perpendicular to the British battlecruisers. Unfortunately the longer range of the British guns meant that they opened fire first, although they achieved few real hits at this extreme range. 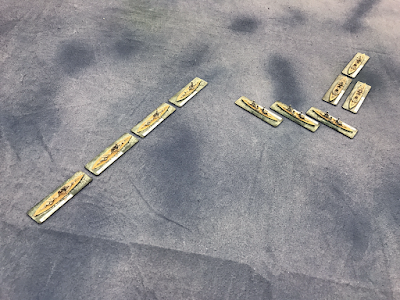 As the opening salvos were thrown across the waves, the British battlecruisers made apparent the mistakes in the initial deployments. Flags were hurriedly flown and many curses spoken as the Invincibles disrupted the formations by sailing through the lines. Last minute diversions and a little luck prevented any collisions but much confusion was sown. 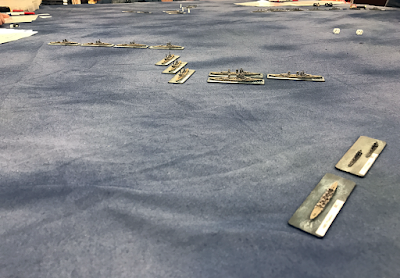 This debacle was looked upon with glee by the Germans as they maintained their straight (and thoroughly German) lines. In the distance the majority of the light forces have begun to tango. The few German forces are desperately trying to screen their bigger cousins. 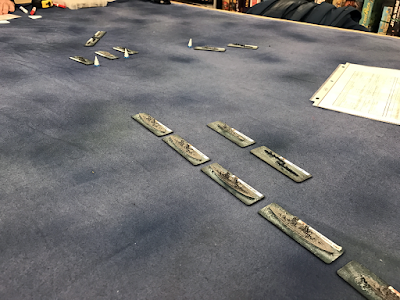 The German battleship line, steaming straight towards possible danger, were getting nervous. 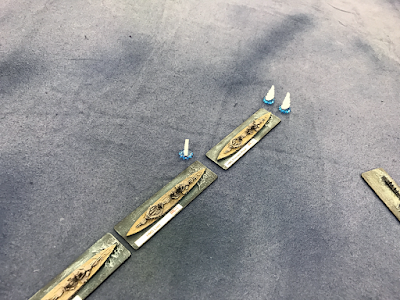 As the distance closed the German battlecruisers were able to respond to the British gunnery in kind. The accuracy at this range was not noticeably different from the earlier salvos of the Tommies. 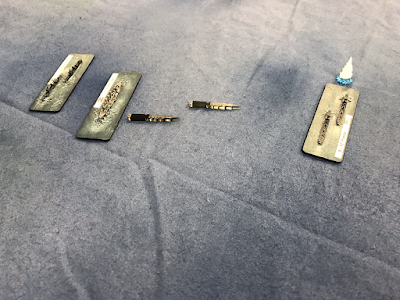 Meanwhile the light forces were engaging each other in close quarters. Up to this point the few German vessels present had done a decent job of distracting the British ships and had sufficiently frustrated Adam. In anger the British destroyers let loose some torpedoes towards the SMS Wiesbaden (light cruiser). As expected none of these torpedoes hit their targets but Adam exclaimed he was simply "pissed off" at the little ship. 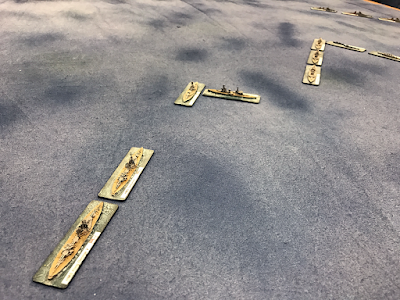 As the British gun line was attempting to sort itself out the German battleship group opened up with full broadsides on the confusion. This did little to help the situation and in short order the HMS Ajax dropped out of the line. Within minutes of this unfortunate event a repeat of historical events occurred. Shells from the SMS Kronprinz and Grosser-Kurfurst landed home on the HMS Invincible and Indomitable, both striking the ships' magazines. The resulting explosion was devastating, putting both ships on the bottom in short order. 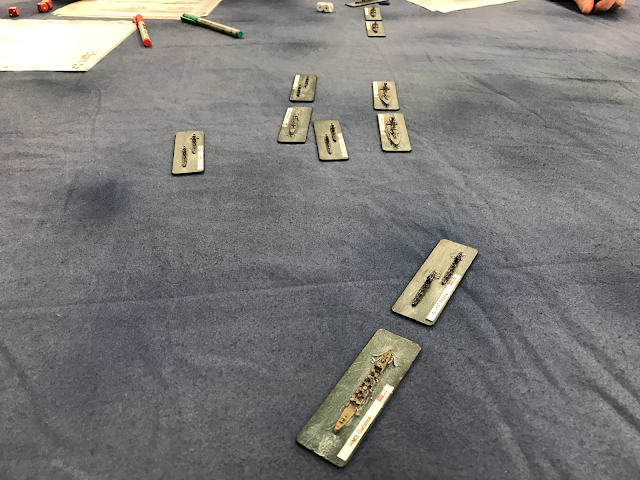 However, luck was not entirely on the German side, amidst these spectacular displays of pyrotechnics, British shells struck heavily on the SMS Markgraf and Kronprinz rendering them floating hulks. This split the German battleship line in two, severely complicating command and control. 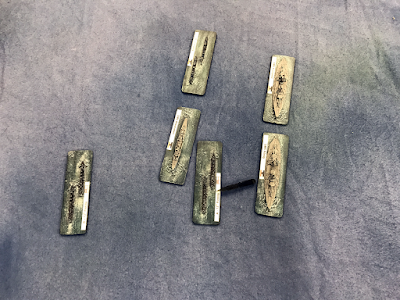 Not to be outdone, the light forces had closed the distance. While suffering moderate losses, and certainly not going to make it out alive, two of the British destroyers managed to get within a few hundred yards and unleash a torpedo salvo on the SMS Konig, the flagship. Some of these torpedoes struck home and caused some damage to the massive ship. Having more experience with WWII naval equipment, Adam was disappointed in the performance of the torpedoes but I assured him that torpedo tactics in WWI were more a case of prayer and wishful thinking. 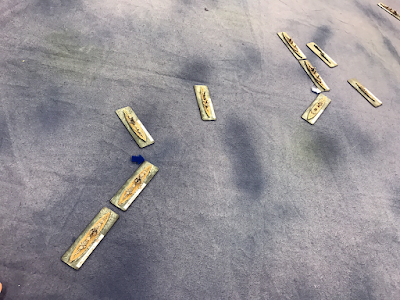 Finally achieving something resembling order, the British gun lines turned into parallel lines and continued their shelling of the German ships. Shell after shell struck the SMS Konig each one convincing Adam that the German flagship was on the verge of destruction, but like some great bulwark the grey behemoth refused to go down. 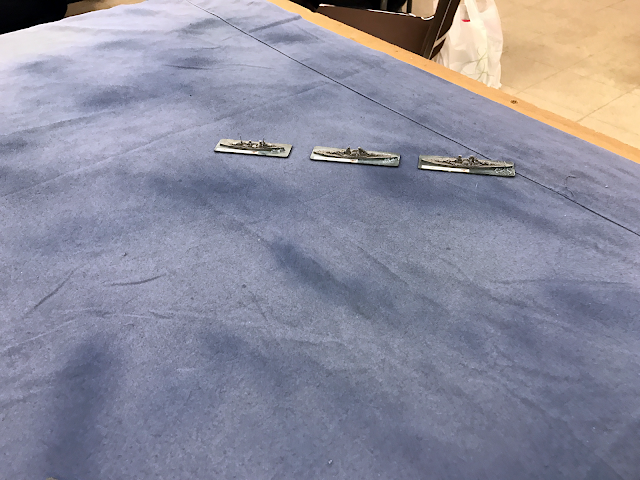 The German battlecruisers had taken losses as well. Their entanglement with their counterparts had left the SMS Seydlitz sinking in their wake and fires to have broken out on all three remaining ships. With the losses incurred the Germans had a good chance of breaking and leaving the field. The two fleets in an SSS game have thresholds calculated as a percentage of their overall forces. For each threshold in losses reached, the chances of the fleet breaking is increased. Whenever the player makes a command roll if they roll the number of thresholds reached or less they lose. In this case the Germans had reached a staggering four thresholds. However, the SMS Konig was stubbornly holding on to life and at the last moment the HMS King George V, the flagship of the British fleet, succumbed to a salvo of German shells and was never seen again. Immediately afterwords, Adam made a command roll to issue a new order and rolled lower than the threshold he had reached. In an unexpected turn of fate, the British had lost.

This was an entertaining and nail-biting game that displayed that we are really on to something with this game. We are in mid beta testing of the game at the moment with the associated software well under way. We are on target for a fall release, so pay attention. I would like to thank Adam for a most enjoyable game and our local store owner Mike for giving us the space to test SSS out in the open rather than in my gaming room. See you next time.