Skip to main content
Labels
Posted by Man For All Seasons February 11, 2017

I'm back with another AAR but his time of a different flavor. This week I finished up that last elements of a painting commission for Adam's Starfleet force, primarily Mirandas, Constellations, and other light ships. With the models needing to be delivered, Adam suggested we get together at our local game store as he wanted to use the models I had delivered in the last batch. Unlike most of our games which have highly detailed scenarios, objectives, and narratives, this was different.

Adam informed me of his point total and declared he was embracing the 'Imperial Guard Syndrome' and he encouraged me to do the same. For the uninitiated, the Imperial Guard Syndrome is manifested in the forces that a player builds or chooses for a game being the most elite that they can. An example of this phenomenon, and one for which the syndrome is named, would be a player that decides to build a Napoleonic French army and chooses to first collect, and possibly only collect, the Old Guard. While there were battles in which the Old Guard made a prominent appearance, it is somewhat uncharacteristic and a-historical to only ever play with them.

In Adam's case he has been accused, mostly in jest, numerous times of being a sufferer of the Imperial Guard Syndrome. To his credit he has fought this instinct with great success, but evidently he wanted to throw sensibility to the wind and go all out. Feeling that this could be amusing I readily agreed. Now the question was what should I bring that would be appropriate. My choice will be evident shortly.

I arrived at the local gaming store with Adam's new models in tow (I will do a photo shoot soon) to see this deployed on the table: 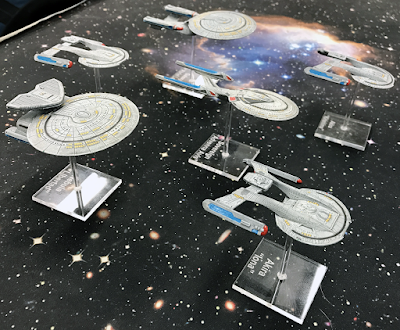 As expected this represented the cream of the crop of Starfleet and would no doubt be difficult to tangle with. As my response I brought this: 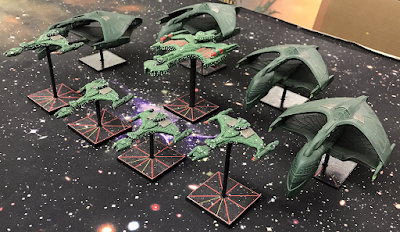 Under normal circumstances I would have mocked someone for bringing a force such as this with no back story or scenario, Romulans and Klingons working together, never! For this game I am lazy and will simply say House of Duras!

My intention with this fleet was to create a hard hitting alpha strike group hidden behind cloak. I determined two paths to victory depending on how the game played out. If possible I would attempt an alpha strike on the Sovereign Class (his flagship) in order to induce morale rolls on the rest of his fleet and simultaneously remove the strongest ship. Failing that, I would attempt to eliminate the three Akiras as quickly as possible to remove from play their massive torpedo armament.

As a warning to anyone who reads my AARs regularly, under normal circumstances my posts are detailed and narrative driven and I hope entertaining, this game was different and shorter.

The opening deployments were simple, Adam put his Akiras in the front with his three heavies in the back, all in one giant block, presumably to maximize forward striking power against whatever target he chose. I deployed my warbirds in line in the middle with the Vorchas to one side and the Negh'Var on the other. The opening moves saw me charge the warp drives on the Klingon ships and turn to face the Federation flanks while the warbirds took their time meandering towards the Starfleet line, all ships cloaked. The Starfleet ships fired torpedoes at long range on targets they weren't really sure were there. The sheer number of tubes on the three Akiras meant one tube randomly managed to hit a target. The IRW Atrox (D'Deridex Class Warbird) took a few photon torpedoes to the bow but was not impeded in her operations. Turn 1 complete. 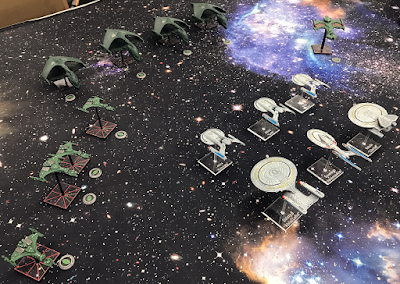 The Klingon ships then performed a tactical FTL jump and leaped across half a light second in the blink of an eye. This maneuver set me up for what I hoped would be an envelopment of the Starfleet line. Still cloaked I did not fire prior to Starfleet; my crew quality was uniformly higher than the Starfleet ships allowing me to normally open fire first. Adam tried his blind fire trick again but was not lucky this time. 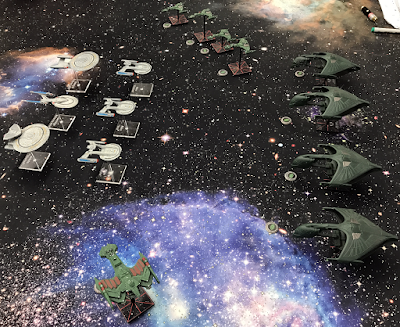 At the last possible moment in the turn the four warbirds unleashed plasma torpedoes into the bows of the Akiras. The plasma energy splashing against their shields collapsed them and scorched their hulls. I hoped that this would motivate these torpedo boats to turn away from my warbirds. Turn 2 complete. 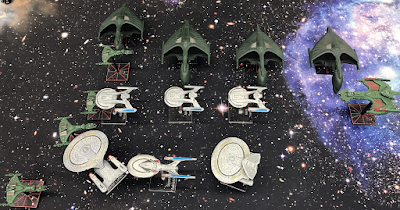 The next movements saw the entire Starfleet force turn to port, desperately trying to keep the damaged Akiras' bows safe. The warbirds closed the range rapidly while the Klingons turned into the Starfleet ships flanks. Success, I had boxed the Hoo-mans in. At the beginning of the combat phase I decloaked all my ships and opened fire (remember I had a higher crew quality so I could fire first). The resulting fire took us nearly 20 minutes to adjudicate. I apologized repeatedly to Adam saying this was the crucial moment of the game and the geometry was complicated, he remained annoyed.

The Klingons fired nearly every weapon they had on the Akiras, the Vorchas from the front and the Negh'Var from the rear. When I was finished rolling one Akira was destroyed outright and the other two had multiple criticals in each section of the ship awaiting his rolls. The Warbirds opened fire on the Nebula and Galaxy with abandon. Sustained disrupter fire from the warbirds and torpedoes from the Negh'Var brought down the Nebula's shields and pierced her primary hull multiple times. The Galaxy withstood the fire gallantly. My shooting was done. 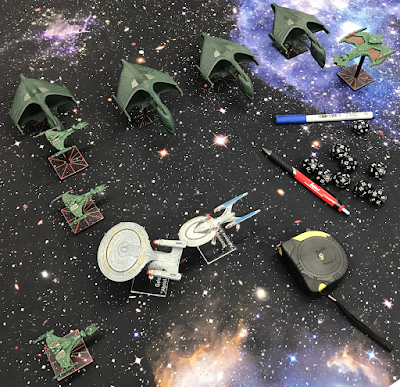 Before commencing his own firing, Adam had to roll the criticals on his ships. The two remaining Akiras were rolled for first. The USS Haruna suffered a warp core breached and disappeared in a flash of blue light. The USS Iona weathered critical roll after critical roll with multiple systems going offline until finally her hull buckled and she drifted away a lifeless hulk. The USS Libertad (Nebula Class Heavy Cruiser) was next. The ship had only received damage to her primary hull but many disruptor beams had pierced straight through the saucer section. With multiple criticals to roll it was with shock that we watched Adam have a Cascade Structural Collapse on the first roll. Bag one Nebula.

Quite irate at this turn of events, Adam unloaded torpedoes and phasers from the Galaxy and Sovereign into a hapless Vorcha directly to the Galaxy's front. The firepower poured into this poor ship would have been enough to eviscerate two Vorchas but Adam seemed determined to enact revenge. With little surprise the Klingon ship disappeared in short order. It then became apparent that the Galaxy was close enough to the target that the torpedo explosions would hurt her as well. Having just destroyed the Vorcha, Adam was now forced to roll damage for his own weapons on his own ship. Photon and quantum torpedo explosions ripped through the Galaxy's remaining forward shields and tore duranium plating off the saucer section. When the die rolling was complete she was left unable to go to warp. Her flagship, the Sovereign, quickly warped out of the system. The House of Duras had a new trophy to take back to Qo'nos. Turn 3 complete.

I am not going to say that this game was entertaining for any of the normal reasons. It was short, brutal, and not in anyway enlightening, but we enjoyed it much the same. I would encourage any gamer of any period to occasionally embrace the Imperial Guard Syndrome and have a silly game. Thank you to Adam and I am sorry buddy!