Skip to main content
Labels
Posted by Man For All Seasons April 25, 2020


Good morning space cadets. The Archanis Campaign is continuing at a good pace with a lull in the fighting after the skirmishes of the first few days. 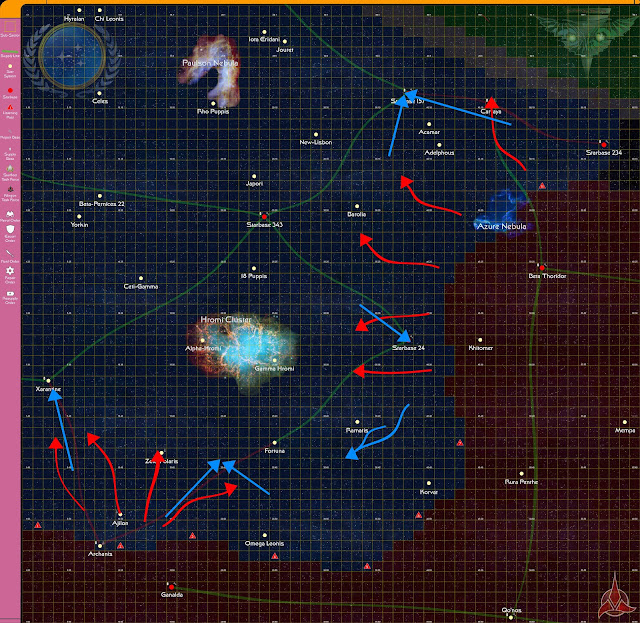 The movement portrayed here is an average of the fleet movements not the specific path of any one fleet.

The next week of the campaign saw continued maneuvers by both fleets. Starfleet again gave ground to the Klingons and began to consolidate its spread out forces into what became known as Death BallsTM. Meanwhile the Klingons advanced further into Federation space.

House Antaak successfully invaded the Ajilon system extending its control of the rimward section of the border. House Korath advanced to and successfully invaded the Carraya system. They then established a new supply base in the system to extend the reach of their fleets. Around Starbase 24, groups of House Korath Birds of Prey played cat and mouse with Starfleet vessels with no weapons being fired, only the war of sensor technicians and cloaking devices.

It was the coreward region that next saw action after the invasion of Carraya. Unable to tolerate this foray into the region, Starfleet mobilized one of its new concentrations of starships and headed out to push the Klingons back. 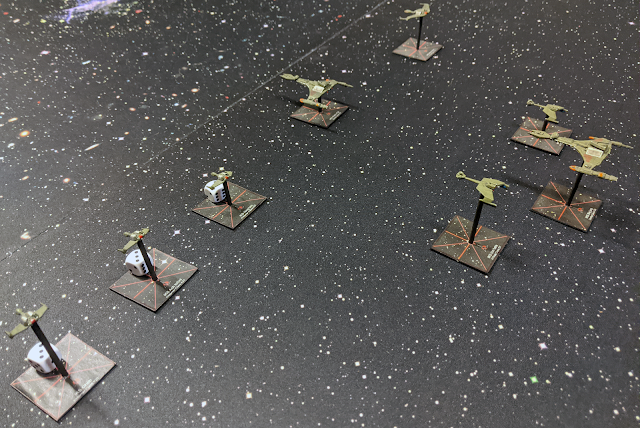 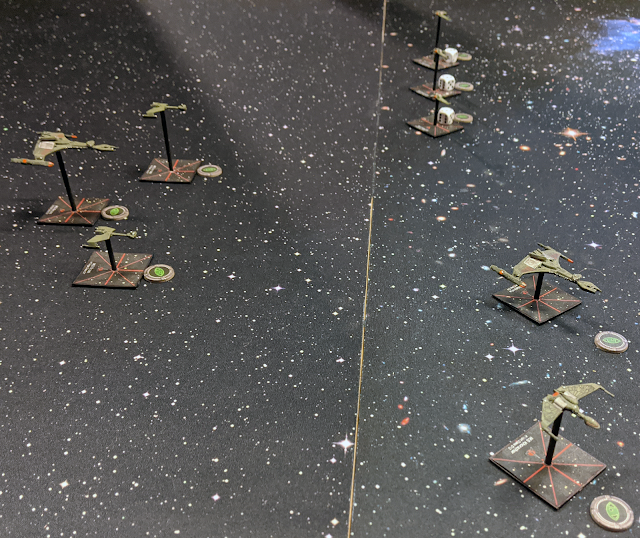 Immediately the Klingon fleet accelerated towards Starfleet with the Birds of Prey swinging left while a Vorcha and K'Vort swung right. 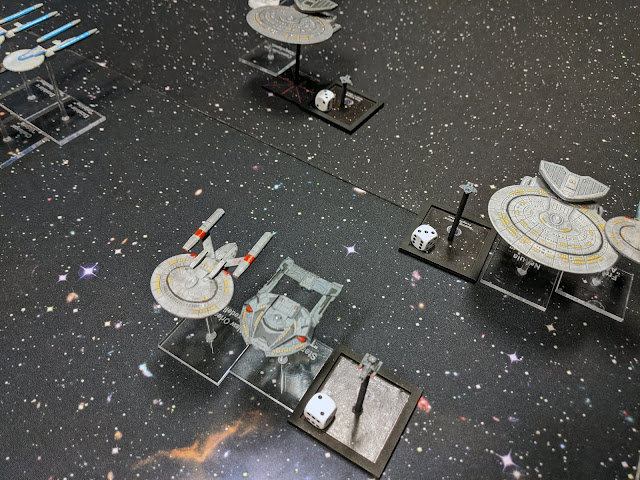 Starfleet pressed forward and launched a few surprises for the Klingons. Each Nebula launched three Peregrines and the Steamrunner launched a duet of Danubes. 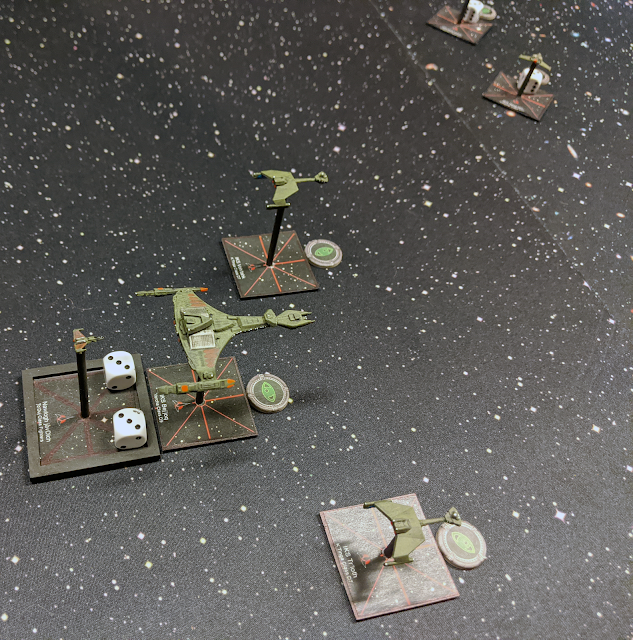 But the Klingons had a surprise of their own. The command Vorcha was a carrier variant and launched two flights of To'Duj Interceptors. Unusual for Star Trek, it appeared there might be a dogfight.

With the unexpected launch of Klingon fighters, Starfleet at first seemed unwilling to commit their Peregrines and Danubes. The two fleets continued to close with one another. The Starfleet line blindly fired torpedoes and a few phasers with almost all missing their mark. However, a lucky hit on a B'Rel consumed it in anti-matter fire. 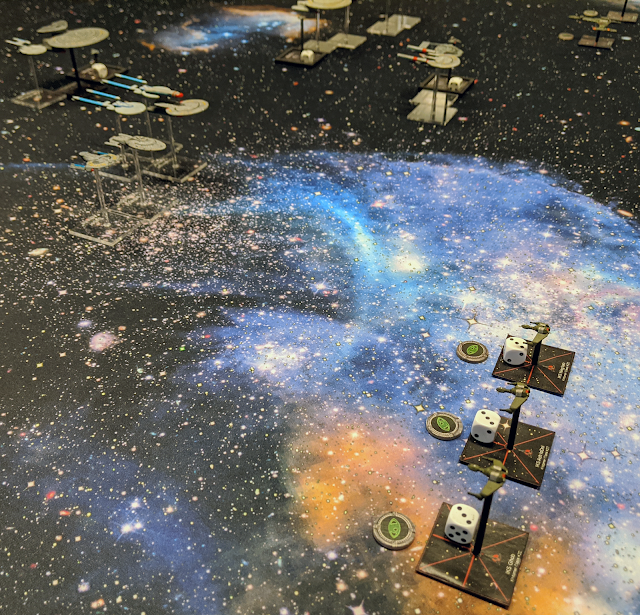 While the forward Vorcha and K'Vort charged at the Cheyennes, the B'Rel line hooked around the left flank. To counter this move, Starfleet moved its reserve of the Saber and Intrepid to reinforce the flank. 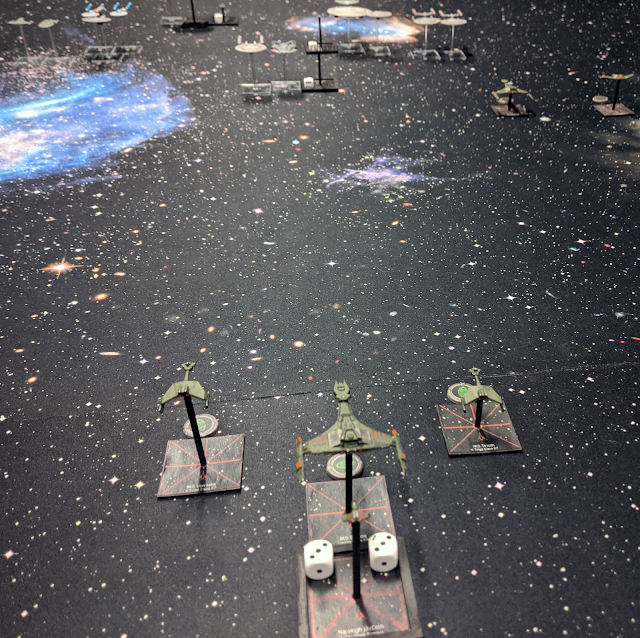 Meanwhile the Klingon command group held back surveying the progress of their forward elements. The Vorcha and her K'Tinga escorts provided long range fire support to the forward groups targeting the New Orleans stripping her forward shields bare and ravaging her saucer section. 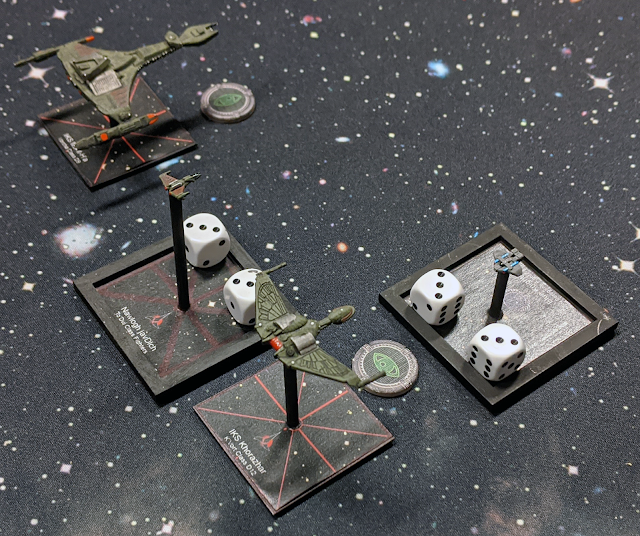 Starfleet countered the charge of the forward group by dispatching six Peregrines to take down the K'Vort. In response, the To'Duj Interceptors raced to the light cruiser's aid. The ensuing dogfight would take down half the Klingon fighters and two of the Peregrines. Four of the Peregrines ignored the Klingon fighters and attacked the K'Vort over the next minute bringing her shields down and destroying her. Before her death, the K'Vort struck at one of the Cheyennes nearly wrecking the four nacelled ship. The Vorcha targeted one of the Nebulas and seriously weakened her forward arc. In return, Starfleet focused their fire and annihilated the Vorcha with extreme prejudice. 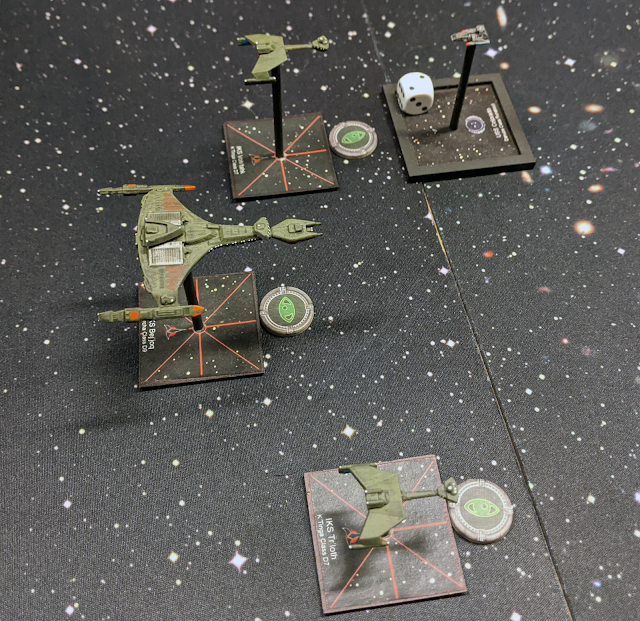 In an attempt to disrupt the Klingon command group, the two Danube runabouts attacked one of the K'Tingas, but in the face of these Klingon warships the two tiny craft were quickly dispatched. On the left flank the Birds of Prey concentrated fire on the Challenger and dealt serious damage to her saucer section. 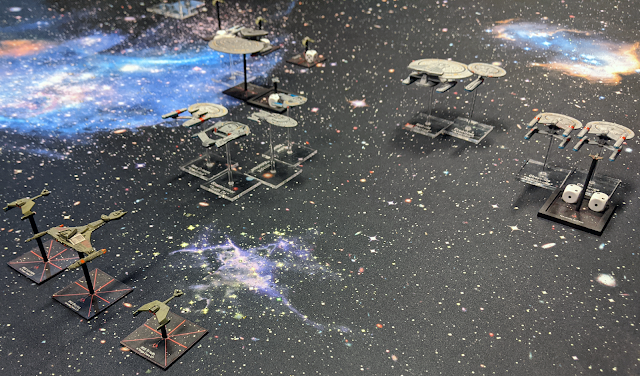 With the destruction of the forward Vorcha and K'Vort, the Klingon command group committed itself to the melee. Starfleet performed a series of bold g-force intensive maneuvers, flipping many ships end for end or turning hard 180 degrees to bring fresh shield arcs to bear. All in an attempt to rob the Klingons of kills. 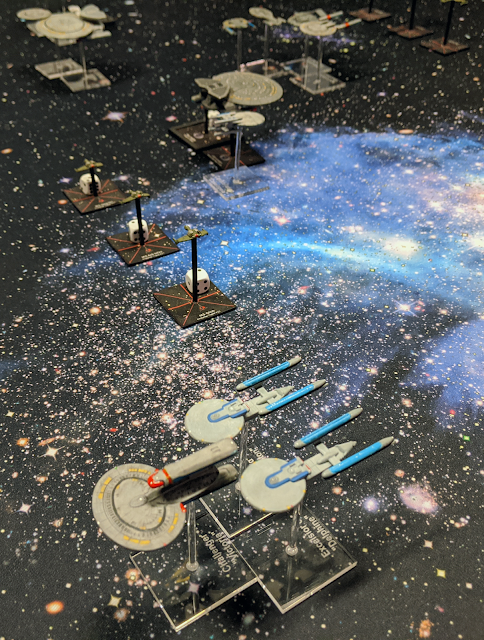 The next few moments saw the concentration of Starfleet firepower on the remaining Klingon heavy ships, enough firepower that the crews of the Vorcha and both K'Tingas greeted each other in Sto'Vo'Kor. In an act of either desperation or rage, the Klingons focused their weapons entirely on the Intrepid which had wandered into the middle of the firefight. In a handful of seconds, Voyager's cousin was drifting debris. The remaining Birds of Prey attempted to retreat from the field but were destroyed by pursuit fire.

This battle was definitely a tactical victory for Starfleet having destroyed several Klingon warships including two Vorchas, but they did lose an Intrepid and fly away with five ships in need of serious dock time. At least the Klingon advance coreward had been slowed for the time being.

The rules for the tactical game play is Metaverse Second Addition, as yet unreleased. The first edition can be found here.