Skip to main content
Labels
Posted by Man For All Seasons April 15, 2011

As promised I finished my Dominion fleet on wednesday, in time to play a game that night with the club. I say with the club and not in the club as it took 8 of us to play the game it was so big. The fleet is composed of 1 Battleship, 4 Battlecruisers, and 50 Attackships which are mounted magnetically to litko fighter bases allowing them to represent up to 300.

The battle saw the battleship, 4 battlecruisers, and 72 attackships face off against a combined Federation/Klingon fleet composed of 1 Galaxy, 2 Nebulas, 1 Akira, 1 Defiant, 6 Excelsiors, 1 Negh'Var, 4 Vorchas, 2 K'Vorts, and 36 Birds of Prey. 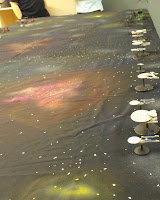 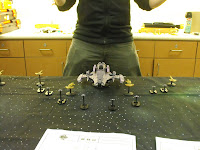 The game began with both sides starring each other down from far beyond weapons range. The Dominion advanced together with their attackships forming a screen far out front. The Federation in typical style held back and advanced slowly. Meanwhile the Klingon flank accelerated to the max. It was on the third turn of movement that the Klingons held true to fashion, left the Federation behind and tactically FTL'd half their fleet, including the Negh'Var into point blank range with the Dominion. 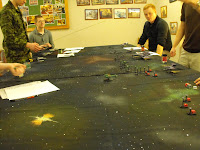 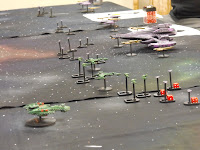 The proceeding weapons fire from the Klingons was most pathetic and not worthy of Kahless (consistent bad rolling) but the Dominion gunners earned their pay and nearly ripped the Negh'Var in two. With the largest Alliance ship damaged, two Dominion Attackships saw their opportunity and attempted a Ram of the Negh'Var.

Here We Go!
Both captains convinced their crews (not hard when they are Jem'Hadar) and initiated their run. The Negh'Var was given a chance to shoot them down and failed miserably as it was engrossed in damage control. The two attackships ripped through the hull of the massive Klingon ship and it broke apart in the silence of space.

The Negh'Var is gone, as would the two K'Vorts soon enough 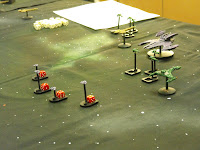 Attackships race past the Klingons

The fighting on the Dominion left flank would continue for another two turns in which the Klingon fleet was destroyed save for a few birds of prey and all but one battlecruiser and a Cardassian Galor survived amongst the Dominion. Notably two Vorchas were boarded by Jem'Hadar and their crews wiped out leaving prizes of war. 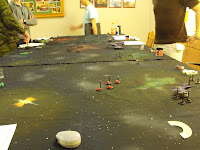 The flank is nearly empty 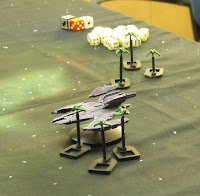 It became apparent that this was a wash and the real battle was about to begin. Conveniently, once the Klingons had been eliminated, the Federation chose to perform a tactical FTL jump towards the Dominion. Unfortunatley little coordination was achieved and half the fleet jumped behind the Dominion ships and half in front. 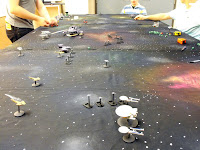 The Federation fleet completes their jump

Unfortunately for the Federation the Dominion had seen this coming and the Battleship had begun turning to starboard to counter the jump. This allowed some of her heavy forward guns to engage the nearest enemy ships. 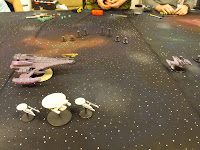 A Nebula takes on a Battleship

In the ensuing fire fight the Akira destroyed a Battlecruiser singlehandedly due to its many torpedo tubes and was then destroyed in turn. One of the Nebulas was destroyed through combined firepower and the Galaxy was boarded by Jem'Hadar and captured. Several Excelsiors were destroyed but the pesky Defiant survived. At the end of the game the Dominion fleet had the battleship (with a noticeable hole in its hull), 2 damaged battlecruisers, 2 Galors, and half their attackships. The Alliance had several birds of prey, 1 Nebula, 1 Defiant, and 3 Excelsiors. The Alliance chose that moment to make a retreat.

The game provided many lessons: Attackships are powerful but easy to destroy, Birds of Prey vs Attackships = wash, the Dominion battleship looks more intimidating then it is and generally just draws fire, and finally never trust Klingons to follow a battle plan.
Email Post
Labels: Star Trek Starships