Skip to main content
Labels
Posted by Man For All Seasons April 10, 2011

We played a game on friday night of Fire Team in 6mm. The scenario involved a US push on a bridge and town in the Crimea around 2015 against Russian defenders. A US armoured company of M1A2SEPs, with an infantry company in Bradleys supported by a battery of M777, Apache gunships and fixed wing support made the push. Defending the bridge and town was a company of Russian infantry in BMP-3s. This company was already deployed in defensive positions. As the game began two Russian armoured companies, one of T-80Us, one of T-90Ms, arrived and moved through the town to assist. 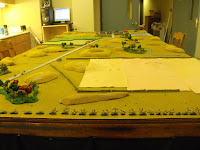 The table from the American end. 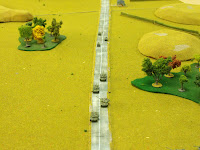 The Americans begin their advance down the road 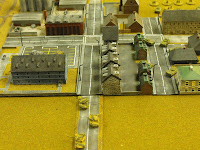 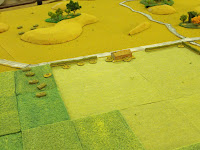 The Russian infantry ready to repel the capit.. err the western invaders

As the first turn began the American column, headed by a recce unit in Humvees and the tanks engaged in a gunnery duel with the lead elements of the Russian armoured column with support from the infantry. During this ongoing firefight the Russian column was badly mauled and the American column appeared to be on the verge of breaking until the appearance of "The God Tank." This namesake was unanimously given to this single M1A2 which took command of its platoon after the original commander was destroyed. Nearly single handed this deity among AFVs held the center position and aided in the eventual complete destruction of the T-80 company. The God Tank was hit several times during this exchange but remained in action. The crew even decided to make a "tactical withdrawal", i.e. route, for a time. However at the end of the game the God Tank remained and claimed a number of kills to its name across the Russian formation. 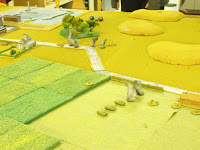 The Russian end of the firefight 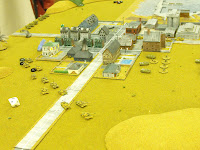 The T-90s move to reinforce their brethren 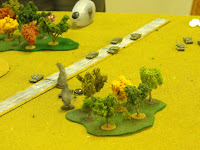 The American end of the firefight 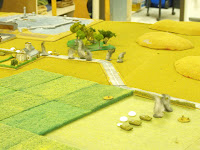 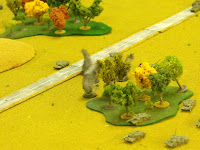 The God Tank stands alone looking down the road 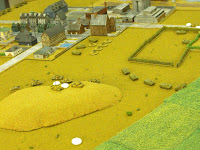 The T-90s take up an overwatch position, one which required the intervention of Apache gunships to dislodge 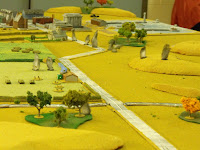 The end of the God Tanks firefight; three T-80s survived and retreated behind the hill to the right. 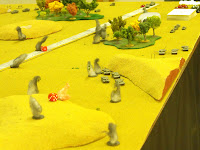 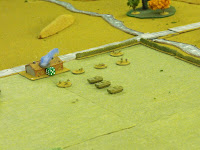 The sole defenders of the center, a platoon of infantry in BMP-3s, advance to take new positions 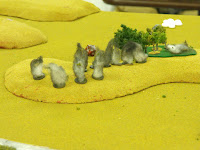 After the Apache gunships dislodged the T-90s from their overwatch position, the American M1A2s were able to establish positions on hills opposite this hill; the remnants of the T-80 company and a series of BMP-3s drove to the crest and were met by accurate gunnery from the Americans which destroyed every vehicle much to the chagrin of the Airforce which were inbound with several AT strikes. 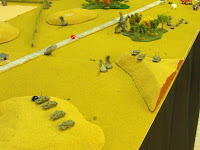 The American positions from which hell was unleashed 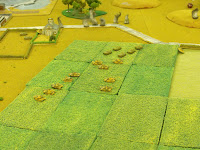 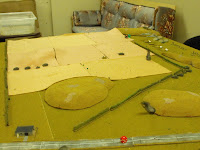 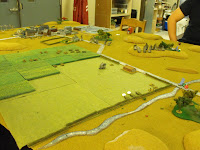 Abandoning their left flank, the Russians establish defenses on their right flank to hold the bridge 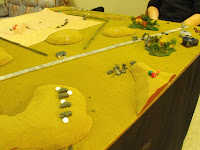 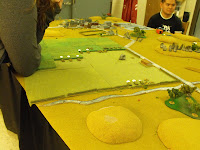 During all of this intensity another battle was being raged on the American right flank against a platoon of Russian infantry defending a wood line. The Americans attempted for some time to bring some mortars down onto their position. Until this platoon was dislodged no advance could be made on the right flank to exploit the loss of the T-80 company. However the mortars finally co-operated and struck home. With the confusion this created an American platoon used their 25mm guns on their Bradleys to drive the Russians out of the wood line. This turned into a hollow victory when flanking fire from the T-90s destroyed or routed most of the exploiting platoon shortly after.

The game was called at this point due to time but it was agreed that the Americans would have taken the bridge, though a costly endeavour it would have been, while the Russians would have held the town. This would seem to indicate a tie except for the presence of the God Tank which would have surely raised the spirits of the soldiers and brought them to victory, or so claimed the American commanders.
Email Post
Labels: 6mm Modern