Skip to main content
Posted by Man For All Seasons April 06, 2011

Wow! It has been a year since I last posted and a busy year its been. I never believed my compatriots when they told me that 3rd year is the busiest at RMC but I have been proven wrong. I have gotten work done on the wargaming front but the extra time to blog about it has either been scarce or finding motivation has been difficult. Well with the end of the school year only weeks away the motivation is returning especially with the knowledge that I will have a slow summer of second language training (6 1/2 hours of french a day).

To start off again I will report on tonight's game. As always Wednesday nights are open gaming nights at the RMC wargames club. Tonight we played a game of Extreme Thrust featuring the Federation-Klingon War of 2372. I will explain what Extreme Thrust is after the battle report. 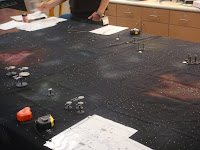 The fleets deploy
The scenario was somewhat lacking as the battle was essentially an equal point battle with no terrain or objectives. The Federation Fleet featured a Galaxy Class, a Defiant class, 2 New Orleans Class, 2 Excelsior Class, and 4 Miranda Class starships. Their adversaries brought to the field 2 Vorcha Class, 6 K'Tinga Class, and 12 D13 Birds of Prey. The dynamic of these two fleets requires some thinking on the part of the two commanders. Federation ships are well rounded vessels able to engage targets in nearly any arc whereas the Klingons focus heavily on frontal attacks. In addition to this the cloaking devices on Klingon ships adds a flavor of hit and run tactics.

The game began with the Klingon fleet cloaked with the Vorchas in the middle, the K'Tingas in 2 squadrons distanced from the center, and a squadron of 6 BoPs on each flank. The Federation fleet deployed the Galaxy and the New Orleans in the middle with the Defiant in reserve and a squadron of 1 Excelsior and 2 Mirandas on each flank. The fleets approached each other in a straightforward fashion; the Klingons accelerating as much as possible. The BoP squadron on the Klingon right flank pushed far out to the right drawing the opposing Federation squadron with them. Meanwhile the center held back and the left flank made no obvious deceptions.

At this point the Federation commander was informed that the BoP and K'Tinga squadrons on the Klingon right flank were readying their FTL drives (a sign that they will either be withdrawing or performing a tactical FTL jump on the next turn). At the same time the two Vorchas fired some ranging shots at the Federation center for little effect or return fire. The following turn the Klingon fleet decloaked and the Klingon right flank performed a tactical FTL jump and closed the distance to the Federation left flank. However the earlier maneuvering of the Klingon ships to the far right had disrupted the Federation formations. This resulted in the Klingon ships coming out of warp at point blank range into the starboard of 1 Excelsior and 2 Mirandas. The resulting fire saw the Excelsior destroyed, 1 of the Mirandas destroyed, and the other damaged for the loss of only a single BoP. At the same time the captain of the Galaxy Class (the USS Venture) made a curious move and turned to starboard to face the Klingon left flank. This opened up his weaker flank shields to the 2 Vorchas. The fire from these two ships was intense but the Galaxy Class survived with its shields holding. On the left flank a squadron of K'Tingas managed to get a favorable position on the Defiant and destroyed it under their combined firepower. 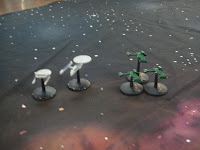 The K'Tingas fire into the Federation left flank

These three situations would make the Federation position untenable in the next turn. As the following turn was carried out the Federation fleet was broken. Of the 2 New Orleans class, one was destroyed by fire from a squadron of K'Tingas while the other was boarded by teleported Klingon Marine parties. The final Miranda on the Federation left flank was destroyed and the Galaxy found its bow, port bow, and starboard bow shields either completely down or failing. For this destruction the Klingons suffered a further loss of 3 BoPs for 4 BoPs total.

At this point the game was called which was a sad day for the two Klingon commanders as several barrels of blood wine had been promised to the captain who captured or destroyed the Galaxy Class. The final tally of destroyed ships was 1 Excelsior, 2 Mirandas, 1 Defiant, and 2 New Orleans to 4 Birds of Prey. This was not so much a failure of the Federation player as a maneuver victory by the Klingons. The tactical FTL jump on the 4th turn allowed for the Federation left flank to be neutralized for little return loss. This then in turn allowed the Klingon right flank to sweep towards the center effectively ending the game. Even in space flanks are important.

Extreme Thrust is a very detailed overhaul of Full Thrust (by Ground Zero Games) that I and the RMC wargames club have been working on for over a year now. This version of the classic game is designed to seamlessly incorporate a myriad of fictional universes as well as address a number of issues that we discovered with the printed rules. I have recently uploaded all the files for Extreme Thrust onto a simple website for ease of access.
http://extremethrust.zxq.net

I will in the next week begin posting reports on my progress over the last year in my wargaming pursuits starting with my space ship fleets and 6mm armies.
Email Post