Skip to main content
Labels
Posted by Man For All Seasons March 13, 2017

This past week my father came over to play with some toy soldiers. We decided on Chain of Command (28mm WWII) by Too Fat Lardies as our game for the day and I set about setting up the table. 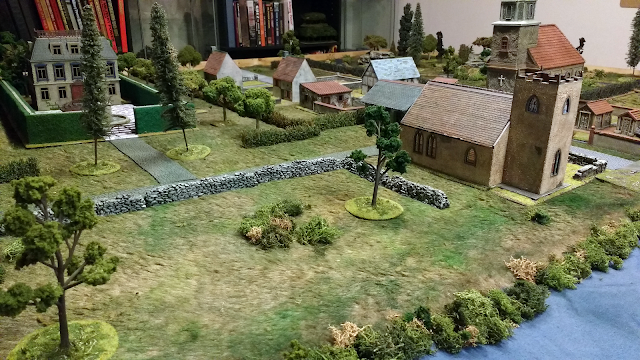 I set up an entire 12' x 6' table with a river down the middle. We only played one side of the river but this setup allows me to get a couple different games in on the same table. We chose the more built up side to push our figures through. 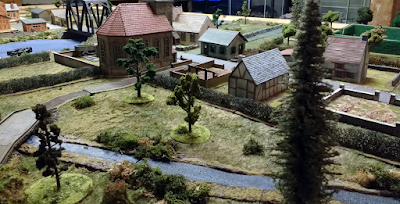 The table featured a number of buildings, including two churches, fields, walls, a stream, and plenty of foliage.

For the game we pulled out my 1944 SS Panzergrenadiers and my 1944 Soviets. I elected to play the Soviets seeing as they have not yet won a single game and I was determined to break their curse. We then set about performing the patrol phase (scout teams recceing each other) and establishing our jump-off points. With this un-photogenic process complete we chose our support options. Because of the sheer firepower of the SS Panzergrenadiers I was granted 10 support points automatically. The scenario granted me a further 6 and the Germans 3. In the end we each had the following: 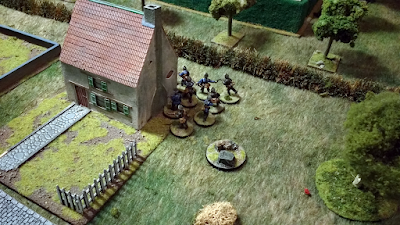 With the German's ears still ringing from the bombardment the Soviets brought on the naval infantry section first with the intention of capturing one of the jump-off points in the middle of the table. 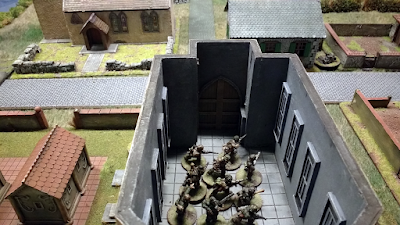 In response the Germans deployed a section into the largest church. This was impressive as the pre-game barrage made it difficult to deploy. 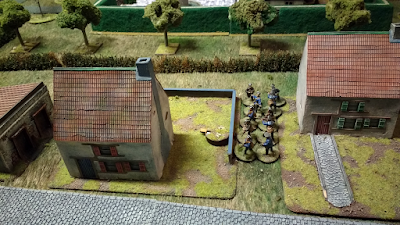 The naval infantry advanced around the buildings on the right side of the street trying to stay in cover. 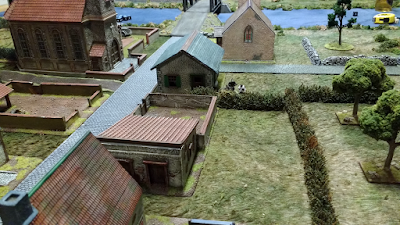 Hoping to block the Soviet advance, the Germans deployed a section off of the target jump point, into and around a small stone house. 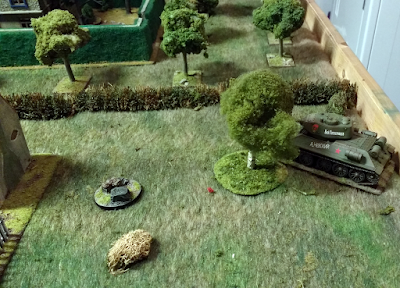 The Soviet commander pondered his situation for a brief moment and then decided that more firepower was needed. The T-34 made its debut. As the German eyes were on the T-34 making its entrance, the naval section managed to scurry one more bound forward. They were now very close to the opposing grenadier section. 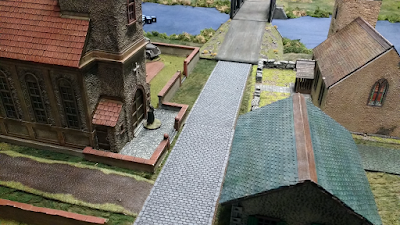 With the naval section becoming more of a threat, the German lieutenant made the decision to move across the street to the other section. As he reached the church doors his hat fell from his head. Confused, the Ober sturm furher then heard the crack of a rifle. The Soviet sniper had revealed himself and missed the SS officer. With little hesitation the officer ducked into the church. 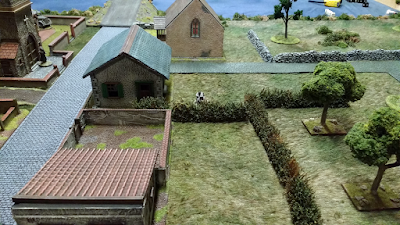 This single rifle crack set off a firefight between the naval infantry and the opposing grenadiers. Miraculously the Soviets won the first moments of the firefight and set one of the SS teams running. 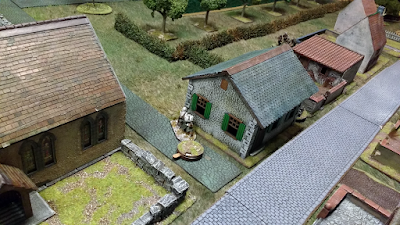 The LMG team retreated back behind the stone house. In the next few moments the remaining team in the building would be shot to pieces and sent running as well. 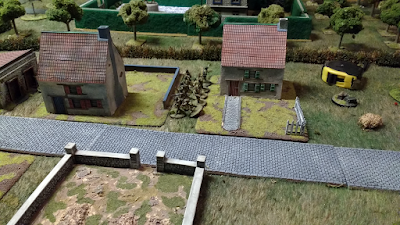 With this victory the Soviet commander deemed the time was right to support success and commit another section, especially since the T-34 crew had apparently decided that it was lunch time. 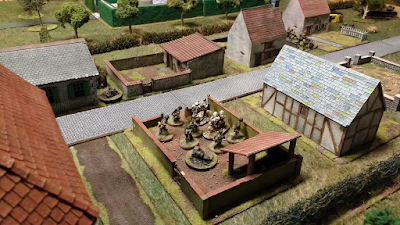 To counter this move the German commander committed his last section in a paddock down the street. From their vantage point they could dominate much of the center of the town. 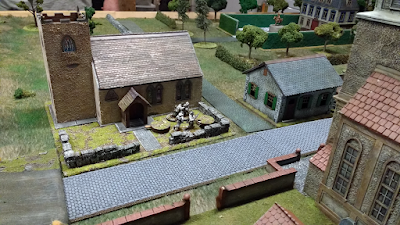 However, with the grenadier section on the left currently running away and yelling Mutter, there was the possibility they could be flanked. 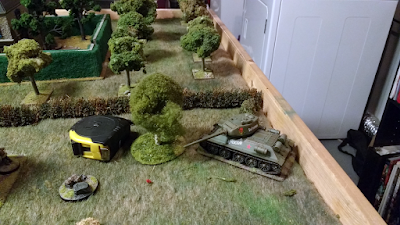 Then, as if on que, the crew of the T-34 finally finished their lunch and decided to participate in the firefight. With the fresh grenadier section in their sights, the crew began lobbing HE shells into the enemy position. 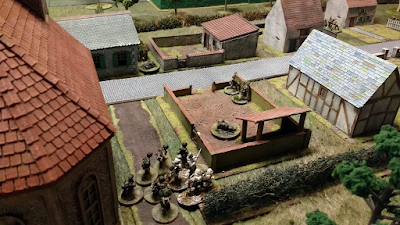 With no defence against the incoming shells, the grenadier section was forced to back out of sight. But the German commander was not out of options. Deploying a Panzershreck team into the paddock he fired a rocket at the T-34 but did not destroy it. The incoming rocket had, however, stunned the Soviet gunner. 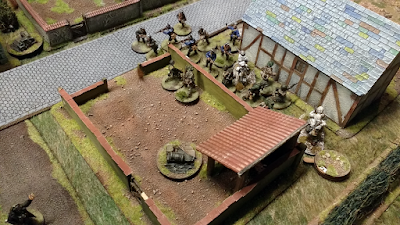 Sensing that it was time to grasp the nettle, the Soviet commander then charged his naval section across the street into a desperate melee with both the grenadier section and the panzershreck team. Submachine guns roared and bayonets clashed and when the smoke cleared 22 dead men lay on the ground, a lone naval infantry man running down the street in panic being the only remaining witness. 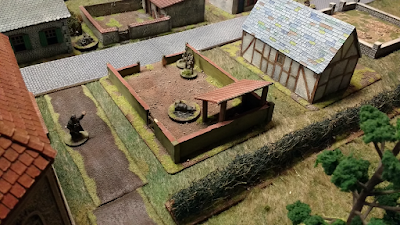 Amidst this carnage the German commander revealed a surprise, he had purchased a second Panzershreck team! In vicious desperation another rocket was fired toward the T-34. Whether due to the bloody sight around them or the tank's bullets striking ground near them, the team's aim was off and the rocket missed. In retaliation an HE shell was thrown at these two hapless Jerries. One of the two men fell over dead while the other remained standing only for a sniper's bullet to take him down moments later. 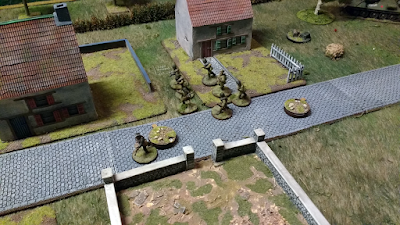 With these kills both the Soviets and Germans stood on the brink of defeat (both at only 2 morale points) and were finding it difficult to control their remaining forces. 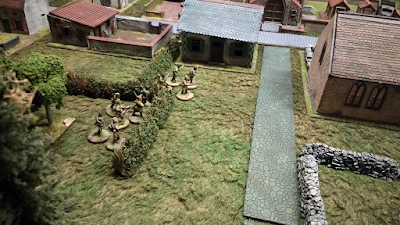 However, the Soviet commander managed to maintain enough composure to attempt a flank with another section. This threatened to undermine what little battlefield control the Germans had remaining. Before the German commander could react to this move a redemption occurred.

Surveying the carnage of the previous few minutes the SS Ober sturm furher lingered in the open for just a moment too long, this time the sniper's round did not miss and with a thud the German officer was dead. This spelled the end for the Germans as their morale promptly hit zero.

I have to say this was one of the more entertaining games I have played in a while, and not just because I broke the curse with my Soviets. Most of the time when I play Chain of Command we view being at 5 or less morale points as pretty much the end of the game. Yet, my father and I played a solid hour with both of use lower than that threshold and it was hilarious. Even though I technically won I would like to think that really I just lost a little less than my father did.

The rules we used can be found here: http://toofatlardies.co.uk/