For our second and last game of the day Adam and I were adventurous. We always put on a game of Metaverse at Hotlead but have generally avoided crossing universes due to the inherent complexity it involves. For this game we bucked the trend and put Star Trek, Star Wars, Babylon 5, and BSG on the table together and the objective was a space station from Warhammer 40K. Additionally we upped our normal player count from six to eight. This was a mighty beast to wrangle. Before we started playing we set up a bunch of models at one end of the table to attract players. I cannot attest enough how much this works, take note fellow game masters! 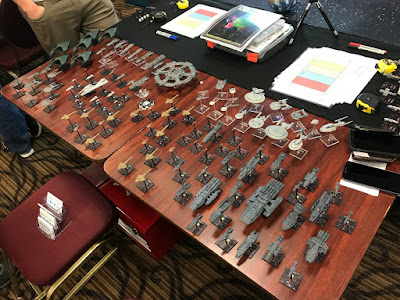 By far not all the models in our collections but enough for eye candy.

For the scenario each faction was split between two players who must work together. Each faction started in one of the four corners, their objective: the station in the middle of the table. At the end of each turn any faction with one or more ships (still alive) within 30cm of the station got a point. Considering that maximum weapons range is 100cm this meant that any ships gaining points would be in range of each other. At the end of the game the faction with the most points won, even if they were completely destroyed.

The forces the players used were the following: 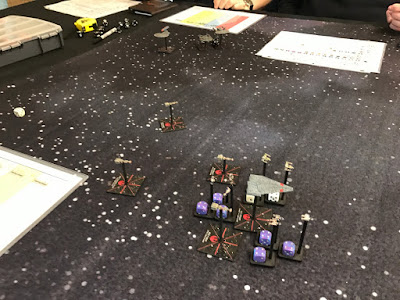 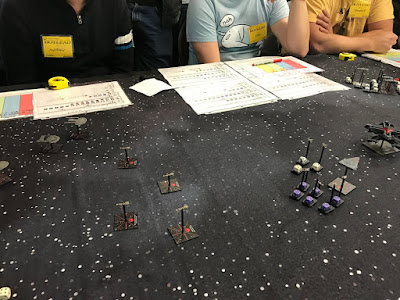 The Rebels in turn moved their corvettes into a screening position, moving the carrier to the station. 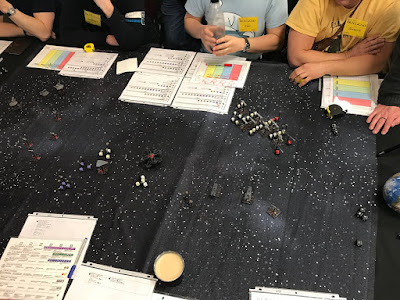 At the other end, Earth Force and Colonial fleet began a long range firefight that Earth Force was winning. 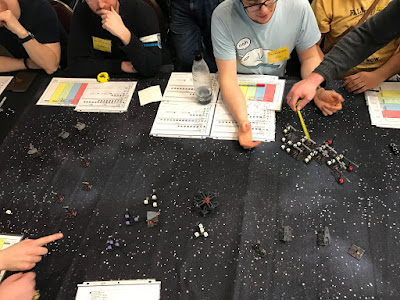 Yet no matter how much fire they put out the "Big F&$kers" would not go down. 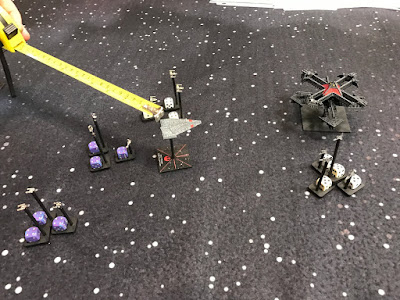 Starfleet decided they could not let the Rebel carrier accrue points that easily. 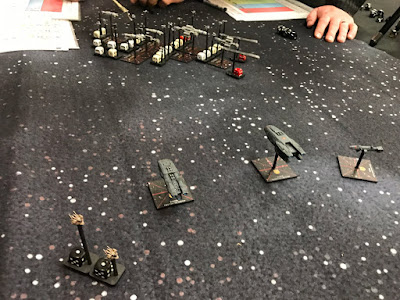 Closing the range the Colonials began to hurt the Earth Force ships. 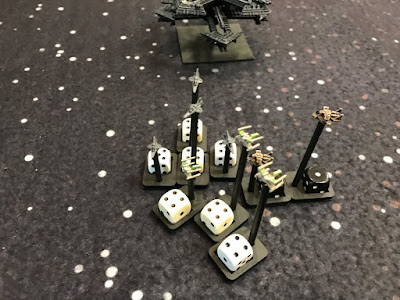 A furious dogfight between Vipers, Raptors, and X-Wings erupted near the station. The Raptors did not survive. 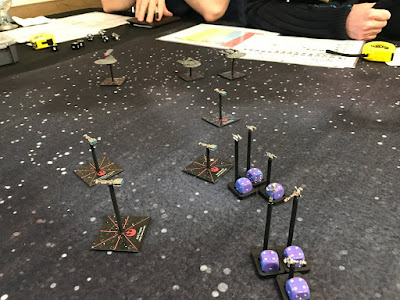 The Rebel corvettes did their best to be the most evasive targets they could while the bombers moved in on the Starfleet ships. 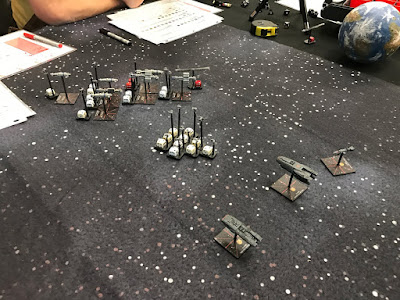 As the range closed further a large group of Starfuries decided to brave the Colonial Flak field. 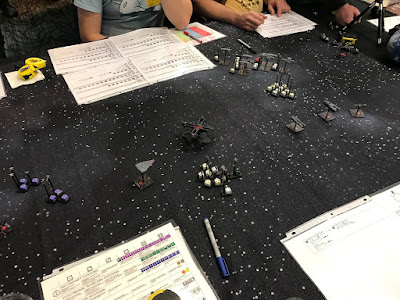 At the midpoint of the game only the Rebels and the Colonials had a ship in range of the objective. 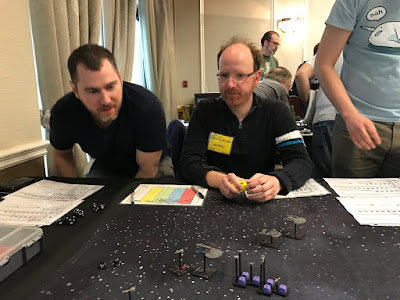 The Starfleet players contemplate how to deal with the jinky Rebel corvettes. 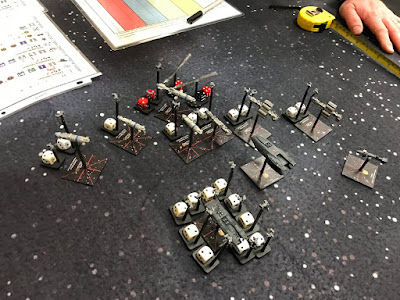 The great ClusterF*&k of the game erupted on the far side of the table. Missiles, lasers, fighters, railguns, and even a few opportunistic photon torpedoes crossed the void in a melee of destruction. 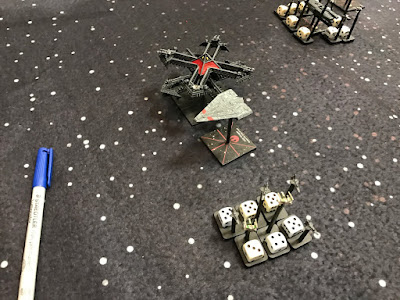 Trying its hardest not to be noticed the Rebel carrier continued to accrue points. Meanwhile the X-Wings and Vipers continue to hash out their differences. 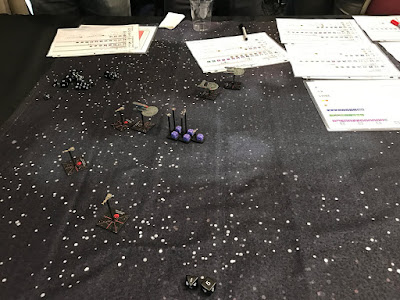 Starfleet had by now mostly brushed aside the annoying corvettes but found that they were no closer to the objective. 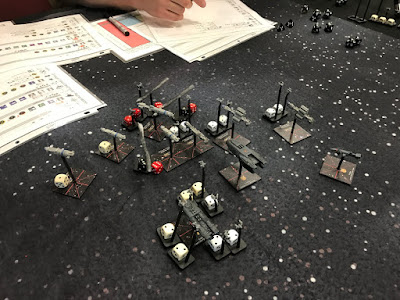 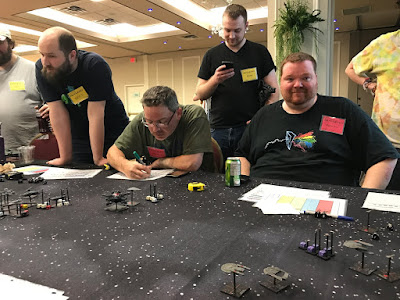 One of the Colonial players records hit after hit as his ship sails through the maelstrom. 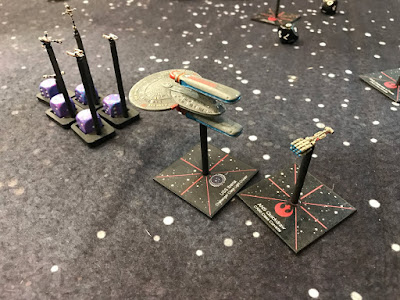 The Rebel bombers, with some losses, move in on the Challenger Class. 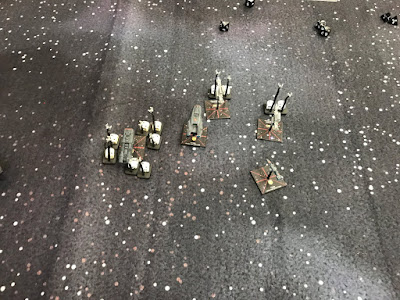 At the end of the chaos, Earth Force was decimated losing five of seven ships while the Colonials all had massive damage. 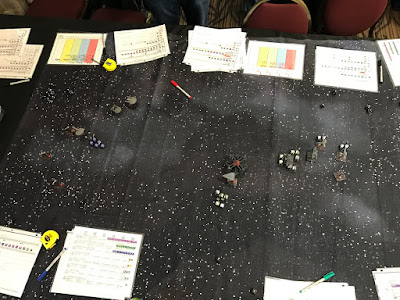 With the time limit for the game reached a tie was called between the Rebels and Colonials who had both racked up the same points with Earth force second and Starfleet a distant third.

This game was very tiring due to the inherent chaos of the scenario but frighteningly beautiful to watch. The Earth Force and Colonial players agreed that their melee was the most vicious battle they had every played in a game. The Rebel players were satisfied that their sneaky and evasive tactics had payed off. The Starfleet players had been so engrossed in their mission to kill the corvettes they forgot both the time limit and the scenario objectives.

I have to thank eight wonderful players who took to the scenario with gusto and learned the rules in short order. Many of them came up to me later and thanked me for the game, Dave even gave me a big bear hug in the middle of the hall, thanks buddy!

I think this game proved that I can run cross universe games at conventions, I just need to be ready for the chaos. See you next year!