Skip to main content
Labels
Posted by Man For All Seasons March 04, 2017

Adam contacted me earlier this week and proposed a game on Friday at our friendly neighborhood gaming store. Agreeing to the game, Adam then told me the details. The game would take place in 2343, two decades before the next generation, along the edge of Klingon space. Remember that this is before the battle of Narendra III so the Klingons have been stirring up quite a lot of trouble. Adam would command a group of Starfleet ships sent to investigate Klingon marauders along the border. I was told to bring an equivalent force of Klingons. To make this game interesting we decided to have the cloaked Klingon ships be represented by tokens such that Adam would have to guess as to my exact fleet makeup.

My Klingon force consisted of the following: 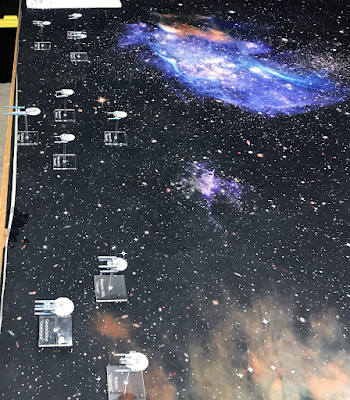 As required by the rules we rolled off using the command quality die of our respective flagships to determine deployment. After a series of terrible rolls on Adam's part, he had deployed his entire fleet and I had only deployed 1/3 of mine. This left me with an opportunity. Adam's fleet had two ships that were especially dangerous to me. The Excelsior was a beta model, fitted with powerful sensors and tracking systems that could help to cut through my cloak. The delta model Miranda was also a counter-cloak variant, though less powerful than the Excelsior. Adam had deployed his Excelsior in the middle of his line and the Miranda delta on his left flank. This meant that his right flank was more vulnerable. 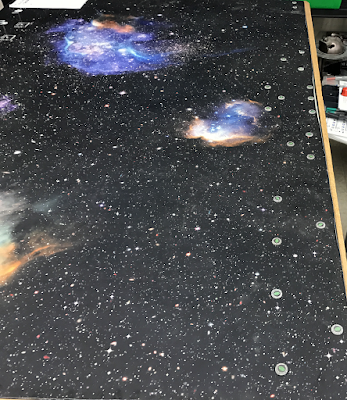 While it cannot be seen here due to the use of tokens, I had deployed all twelve birds of prey in the middle to distract the Excelsior and her escorts. Meanwhile, my heavier units would swing through Adam's right flank under cloak and close with the Excelsior. That was my plan at least. 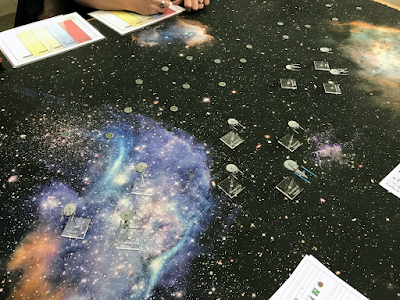 As the game began the Klingons spared no engine power in their drive to close the distance with the Starfleet prey. Detecting the subspace signatures of the cloaked ships but unable to get a target lock, Starfleet began to indiscriminately fire photon torpedoes in the direction of the sensor blips. Torpedoes soared across the void again and again as the sensor blips became closer, none achieving any appreciable effect. Then, as frustration grew among the Starfleet tactical officers, a single torpedo struck a target on the right flank. For a few seconds the Starfleet crews waited to see if the ship would de-cloak, but alas, it continued on its way. 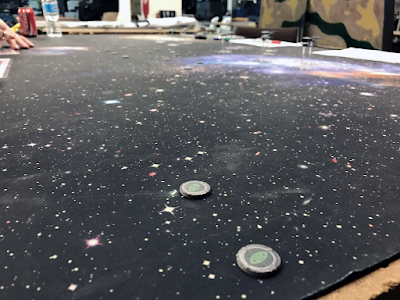 In the midst of their flurry of torpedo fire the Starfleet Admiral had seemed to miss two sensor blips on his far left flank that were moving apart from the rest of the fleet, and considerably slower too. Missing this detail was understandable as at that moment, almost as if in retaliation for the single torpedo hit, twelve Birds of Prey de-cloaked at close range and opened fire on the center Starfleet squadron. No critical damage was achieved by this move but shields flared and collapsed on a few ships granting possible opportunities as the seconds wore on. 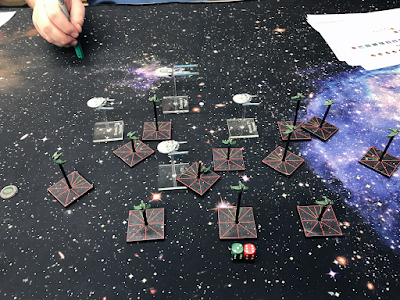 In order to protect their now damaged forward shields, the Starfleet center squadron turned to starboard. As they did so the Birds of Prey began to swarm about them like locusts. Disruptor fire continued to be poured into the Starfleet ships but again no critical damage was incurred. In response, carefully targeted photon torpedoes (careful of that splash damage!) and phaser banks eviscerated four Birds of Prey. 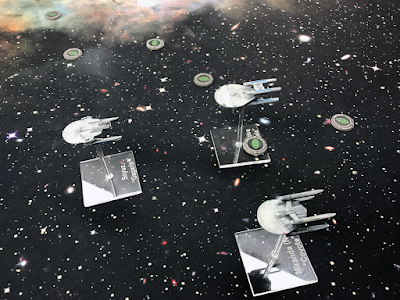 Meanwhile the USS Cassiopeia, Gagarin, and Coyote had turned into the Klingon left flank, searching the skies with their phasers. After several misses, the tactical officer on board the Cassiopeia (Constellation Class Cruiser) reported he had hit something. Although they didn't know it, Starfleet had just accidentally knocked out the primary sensor array on a cloaked B'Rel Class Cruiser. 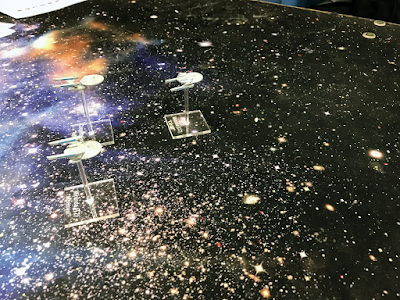 On the other flank the USS Nero, Cardiff, and Montreal were finally responding to the two lone blips. They reached out with photon torpedoes and phasers but did not have the luck of their brethren on the other flank.

At this point the Klingon heavy units on the left flank (2xB'Rel Class Cruisers, 4xK'Tinga Class Light Cruiser) de-cloaked and began to fire on the USS Hestia (Excelsior Class Explorer). First came torpedo volleys from the K'Tingas crashing against the forward shields, already weakened from the Birds of Prey. In short order the forward shields had collapsed, scorched hull panels across the saucer section indicating hull damage. Next came the torpedoes of the B'Rel Class Cruiser, the other B'Rel had her sensors knocked out earlier. Crashing into the hull of the saucer, duranium hull plating and tritanium bracers were tossed into space as matter met anti-matter. As the last torpedo landed, the saucer section was a twisted wreck of blackened metal and sparking circuits. Unwilling to show any mercy, the B'Rel then fired her disruptor cannons into the secondary hull of the Excelsior piercing holes through and through, sucking men and material into the black. 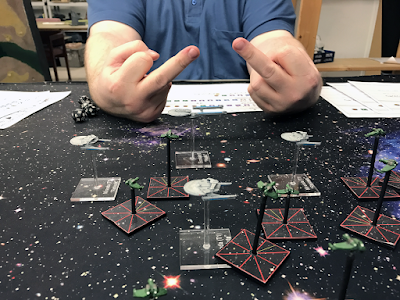 After this intensity a number of criticals were required to be rolled for on the Excelsior. Nearly every system went down across the remains of the ship. However, amazingly the ship was left with thrusters, its secondary sensor, and its forward torpedo tubes. Theoretically the ship, what was left of it, could be fought from engineering. Unfortunately the chief engineer, probably the highest ranking officer left on the ship, decided that this was not in his best interest and decided to save the ship. Trailing debris in its wake, the USS Hestia, minus a good portion of her saucer section, limped out of the battlespace at low warp.

Adam reacted to the departure of the Excelsior in the only way he knew how. I think he believes the little pieces of resin can understand sign language. With the flagship gone the rest of his fleet was required to make morale checks as well. In an amazing series of rolls Adam managed to fail seven of nine checks leaving only two ships to prosecute the battle further. 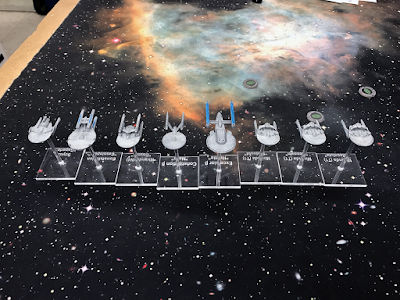 The cowards of the game were lined up after the battle so that they could feel shame together. Over the course of the game Adam hadn't lost a single ship. In fact I had lost four, and yet his fleet ran. That's what I call shock and awe!