Skip to main content
Posted by Man For All Seasons October 08, 2017

Happy Canadian Thanksgiving everyone, this past Saturday Adam and I subjected ourselves to another one of our "Good" idea games. Earlier in the week Adam had proposed to me that we do a Magic The Gathering style draft game with our combined Starfleet fleets. Both of us have been slowly collecting our 3D printed fleets and they are both now fairly extensive. With that in mind we made a list of all the classes that we had models painted for. Any ship with a visual identifier would qualify such as a Nebula class with different mission pods. However, if a single model could be used to represent different variants then that counted as a single choice.

It was decided that Adam would choose first and I would choose second. We went back and forth naming Starfleet ship classes. If a person named a class they could include it in their fleet makeup but their opponent could not. We did this until every class had been selected all the way down to the tiny NX Class. With that complete we determined a point value and then proceeded to make our fleets.

On Saturday Adam showed up with a twinkle in his eye to match my own. While we both knew what classes we each had available we had little idea as to the actual makeup of our fleets. Joining us for the game, Mel joined my side, while relative newcomer Will, joined Adam's.

The fleet I built was weighted towards heavy ships and specifically advanced ones. The fleet consisted of the following:

The fleet that Adam built was more balanced between light and heavy. The fleet consisted of the following: 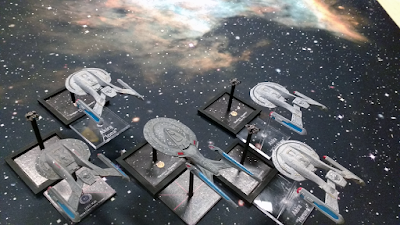 A series of command roles determining scenario and deployment and my fleet, which we determined was the Prime universe faction, was deployed along two edges of the table in a flanking position. Along the primary edge the USS Independence (Sovereign Class Explorer), our flagship, and the four Akiras were positioned to provide devastating long range torpedo salvos. I took command of this group. 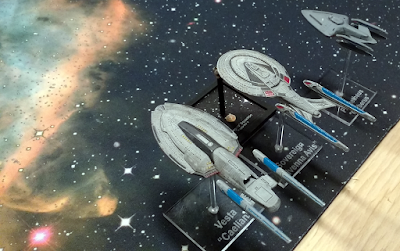 Along the flanking edge, my wife Melissa deployed the USS Advenna Avis (Sovereign Class Explorer), the USS Caelian (Vesta Class Explorer), and the USS Cerberus (Prometheus Class Cruiser). The intention with this formation was to have a fast moving brawler group that would disrupt the enemy's formation while the bombardment group tore them apart from range.

Adam and Will deployed their Mirror Universe fleet in a compact formation equidistant from the Prime Universe ships. The sensor pod Nebula and the three Defiants were deployed closest. With the opening moves, Mel's three ships charged up their warp engines announcing to all her intention to initiate a dogfight with millions of metric tons. Long range fire between the leading edges of the Mirror Universe fleet and the Prime bombardment formation bore witness to the Nebula's forward shields collapsing and antimatter scorching appearing on her saucer section. In response Mel's Sovereign had its forward shields severely depleted under a Quantum Torpedo barrage from the three Defiants.

As the opening seconds slipped into the opening minutes, Mel's three ship squadron conducted a micro warp jump into the middle of the Mirror Universe fleet. While the Galaxy Dreadnought was cloaked, Mel was still relieved to not be in its front as she wished to avoid its deadly Phaser Lance. The three severely outnumbered ships rapidly opened up with Type 12 Phasers in every direction and Torpedoes, both orange and blue, flowing from both fore and aft launchers. As the many dice were rolled and a terrifying number of hull and shield hits were blown away Will and Adam remarked that it resembled three porcupines made of energy lashing out at a swarm of predators.

As this deadly dance was occurring, my bombardment group struck another blow. Under a barrage of torpedoes the Sensor Pod Nebula crumpled and drifted away. Almost as an after thought one of the Excelsiors received a portion of the barrage wrecking its saucer.

Unfortunately for Mel, as she was dishing out death in every direction, the totality of the Mirror Universe firepower that could be brought to bear were aimed solely at the Sovereign. While a Sovereign is indeed a very tough ship, even they have their limits. When the dance of death was completed the Sovereign Class drifted apart in more than one direction having received no less than two dozen penetrating Phaser strikes across her primary and secondary hull. Apparently the fates were not satisfied with this penance Mel had to pay for her aggressive maneuver. After watching their companion be eviscerated right beside them, the Vesta and Prometheus' Captains chose to exit the battlefield (failed morale check). On this sour note Mel had been eliminated from the game. But she had not gone quietly. With her she had taken the Sensor Pod Miranda, the Tempest, two of the Excelsiors, and had dealt heavy damage to the War Variant Galaxy.

Stinging from that display of destruction, Adam and Will turned to close the distance with my bombardment group. As the distance shortened the many torpedoes let loose destroyed the two Mirandas and damaged the forward shields of the War Variant Galaxy.

Meanwhile the three Defiants, seemingly immune to the attention I gave them (thanks to their damned ablative armour) swung around my flank. 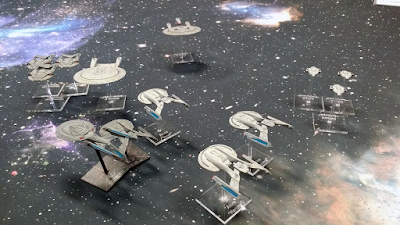 Finally in a Mirror (chuckle) of Mel's maneuver, Adam and Will performed a micro warp jump of their own to point blank range of my ships. In the ensuing firefight the Galaxy dreadnought dropped my Sovereign's starboard shields and scorched the secondary hull and Will's ships destroyed an Akira. As payment, The War Variant Galaxy succumbed to a whopping 57 criticals across all three sections and promptly died and all but one of the Steamrunners was vaporized. I actually felt bad for Will at this point as his only remaining ship was a lone Steamrunner with no forward weapons, only its secondary sensor array and no impulse engines.

Surveying the carnage that had occurred we decided to call the game a draw. Two players had effectively been eliminated and both sides were down to four ships of approximately equal firepower. We had tremendous fun with this draft idea and are looking at other fleets we own with which to repeat the process.

The rules we used can be found here: http://metaverse.battlespacepublishing.ca/downloads.php