Welcome back to part 2 of Saturday's game lineup. After completing our much enjoyed Battle Captains game AJ and I moved on to playing with his new Star Trek collection (Dave went and took a nap, old man!). AJ completed this project a few months ago and I have been itching to try it out. Seeing as my project is TNG, AJs TOS project is somewhat unique. The scenario we played involved a group of disgruntled Klingons and Romulans unhappy with the Khitomer negotiations and hoping to provoke a war. As such the forces available to the disaffectors were predominantly third rate coming from house fleets and reserve formations. Starfleet on the other hand was quite up to date with new and powerful ships on the table. AJ of course chose Starfleet.

The write up for game one can be found here: http://amerematterofpainting.blogspot.ca/2017/10/saturday-gaming-trio-part-1.html

The write up for game three can be found here: http://amerematterofpainting.blogspot.ca/2017/10/saturday-gaming-trio-part-3.html

The Klingon task force I commanded consisted of the following:

The Romulans contributed the following: 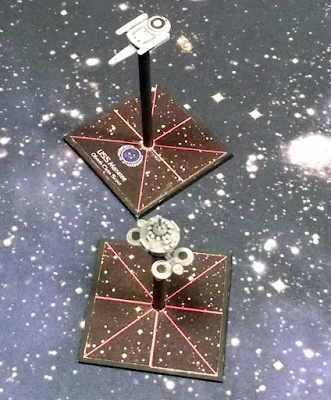 The primary goal of the Klingons and Romulans was to destroy this Regula class space station just inside the neutral zone. The station was accompanied by her attendant Oberth class vessel the USS Manatee... 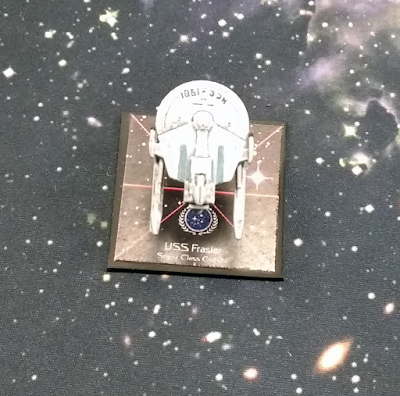 and her protector the USS Frasier, a Soyuz class monitor. 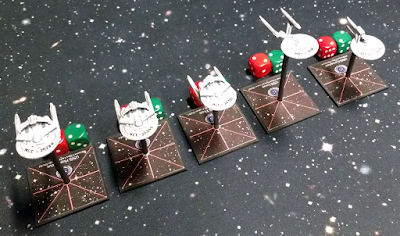 Starfleet arrived with two task groups to fend of the marauders, the first consisted of: 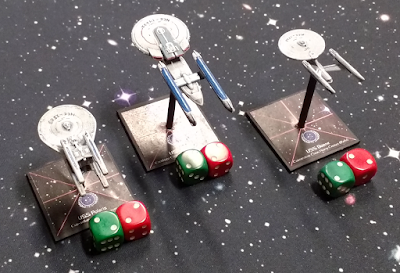 The second task force consisted of the following: 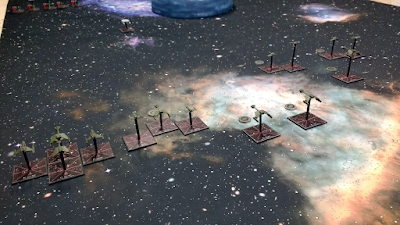 The game began with the Klingons accelerating to round the gas giant (cloaked of course)... 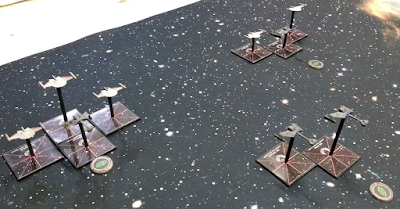 With the Romulans approaching on the opposite flank. 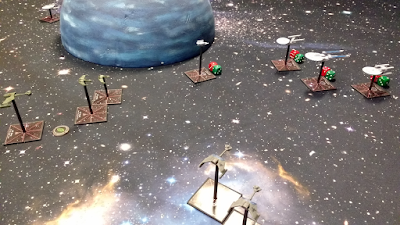 The Starfleet groups split to round the planet from opposite sides and force the marauders to confront them. It didn't take long with the Excelsior's group encountering a mix of Klingon and Romulan cruisers and Birds of Prey. 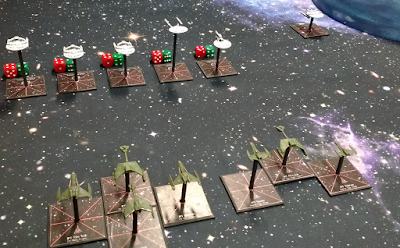 While on the opposite side of the planet the destroyer group faced off against a large group of Klingon cruisers and destroyers. 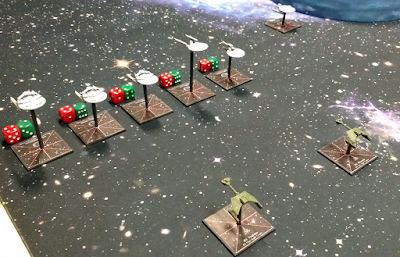 In the ensuing firefight all but the two D7s were destroyed. None of the Starfleet ships were destroyed on this flank but all received damage in some form with one Miranda's nacelles being sheered off by disruptor fire. 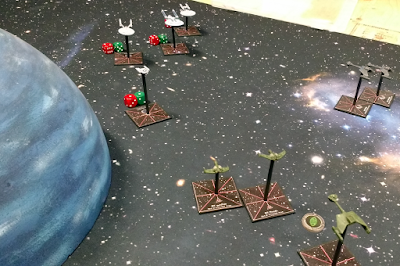 On the other flank two birds of prey disappeared (one at the hands of the Oberth!) and the Romulan flagship had its bridge destroyed, taking the fleet commander with it. Starfleet shields were depleted but it seemed as if the enemy was not giving it their all. 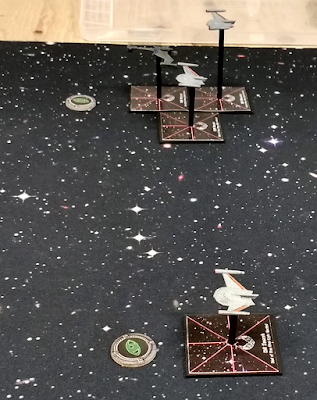 This was not helped by the Romulans as it seemed the majority of their fleet was being, well, Romulan. Hanging back with most of their fleet still cloaked, the Romulans were apparently seeing how the battle was going to progress before committing themselves. With the destruction of the flagbridge, four Romulan ships warped away without ever decloaking. 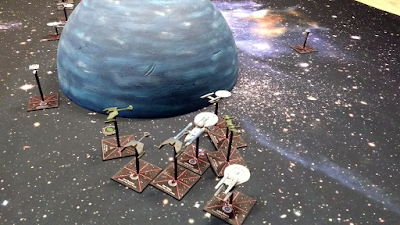 Further in the gravity well the ordered lines of the fleets had been replaced with a nasty furball as the Klingons and few brave Romulans tried to round the planet while Starfleet twisted and turned to keep torpedo tubes point at the enemy. All of this happened deep in the gravitational pull of the gas giant, taxing thrusters to their breaking point. 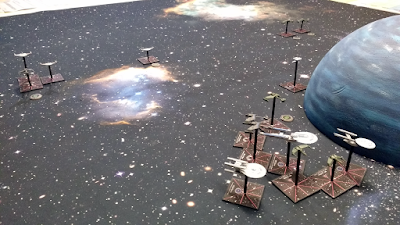 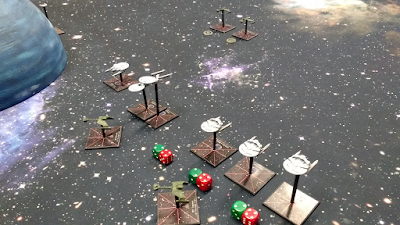 On the opposite side of the planet, the second Starfleet force managed to maintain their pretty lines as they pursued the target hungry Klingons, although not without a near collision between the Constitution and Wilkerson Classes. This group of Klingons seemed to be a little more clever as they had kept back two cloaked D7s as a secondary wave with only the Soyuz to confront them. 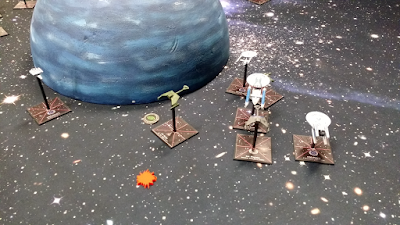 The disordered melee on the other flank became brutal as torpedoes, phasers, and disruptors were exchanged at point blank range but Starfleet remained intact. All seemed reasonably good until the Excelsior's sensor officer noticed a large ball of plasma approaching from the stern. One of the retreating Romulan Birds of Prey left a parting gift in the form of a plasma torpedo. 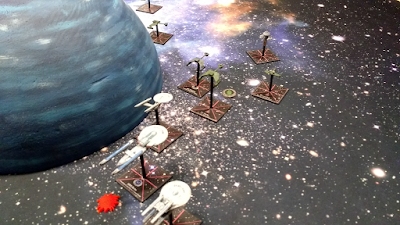 The Starfleet ships pushed their impulse engines past their limits to both chase the Klingons that broke through their lines and hopefully outrun the Romulan gift but they weren't fast enough. 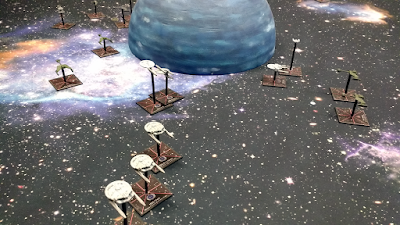 With a bang the plasma torpedo detonated against the aft shields of the Excelsior bringing them down and scorching the hull. It is a testament to the power of these big ships that no serious damage was inflicted that could not be remedied by a can of paint. The Constellation that was on the Excelsior's immediate starboard-aft did not fare so well. So close that the torpedo damaged it as well, the four nacelle cruiser disappeared into a cloud of debris.

As Starfleet reeled from this loss (the only one for the game) The Klingon's opened up on the station and although damage was inflicted and a few systems were knocked off line they failed to destroy it. It was here that their strategy fell apart. Slingshoting past the station at full impulse with angry Starfleet ships on their tail, the Klingon and Romulan ships were forced to retreat.

Thank you AJ for bringing your toys along and letting me play with them, it was a lot of fun.