Good day everyone, This past Saturday I had the pleasure of having both my father, of muchadoaboutnothing, and my good friend AJ up for the weekend. In anticipation I arranged to play three games over the day (why do I keep doing this to myself). The first game we played was a Battle Captains game set in the north western end of Romania in 1944. Dave took up the mantle of the Romanians while AJ managed the Soviets.

The write up for game two can be found here: http://amerematterofpainting.blogspot.ca/2017/10/saturday-gaming-trio-part-2.html

The write up for game three can be found here: http://amerematterofpainting.blogspot.ca/2017/10/saturday-gaming-trio-part-3.html 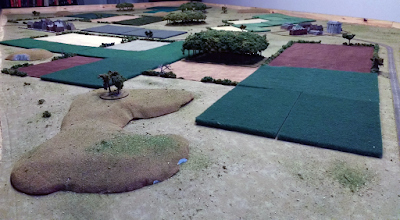 The battlefield consisted of a smattering of low and high crop fields, winding roads, light woods, and a smattering of buildings. Long range engagements were not impossible in this terrain but the many features proved to be an obstacle to lines of sight. 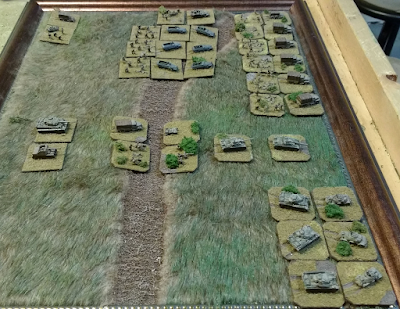 The Romanian Kampfgruppe consisted of:

In addition the Romanians had gathered up some disparate Germans with:
-Panzergrenadier platoon in SdKfz 251/1s
-Tiger
-Marder II 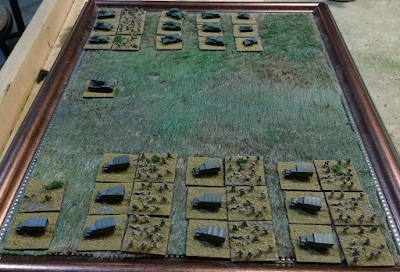 In comparison with the hodge podge nature of the Romanians the Soviets arrived with the following: 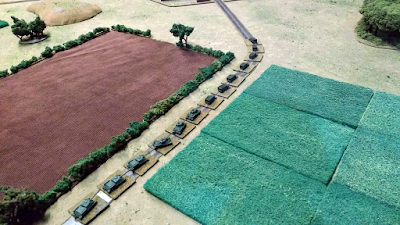 Having completed the pre-battle phase, establishing objectives, registered artillery targets, and the game's Centers of Gravity, the Soviets entered the table. The largest Soviet contingent with most of the infantry and armour moved in column down the primary road. 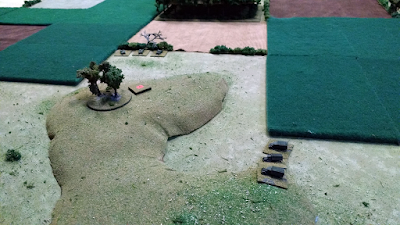 Meanwhile, another infantry platoon advanced to relieve the T-70s which had been deployed as the recce contingent. 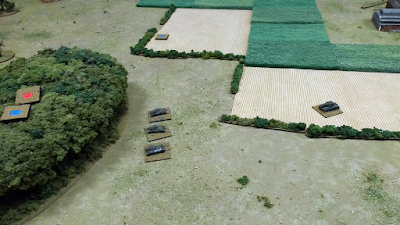 In support of the recce, the Soviets had deployed the Desant platoon with an attached KV-2 (resulting in vastly different movement rates within the platoon). This deployment threw off the Romanians and they were forced to completely change their battle plan from scratch within the first 5 minutes of game time. 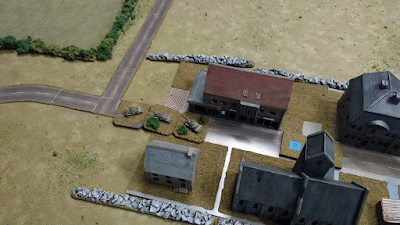 The initial Romanian move was to race their recce platoon of SdKfz 222s to one of the Centers of Gravity, in this case a village on the right side of the table. 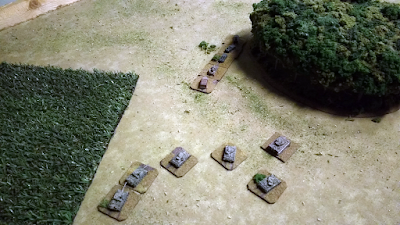 To counter the movement of the Desant platoon, the Romanians moved the Panzergrenadiers, with attached Stugs, to a woods with the T3s and the Tiger in support. This represented the majority of their firepower and was, in effect, putting all their guns in one basket. 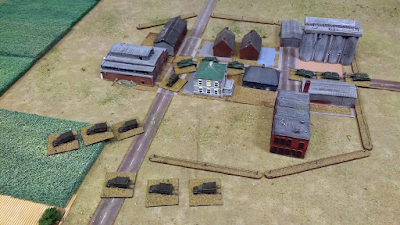 As the Soviet advanced guard and the Romanian heavy forces jockeyed for position, the rest of the Soviet company advanced through the industrial area. 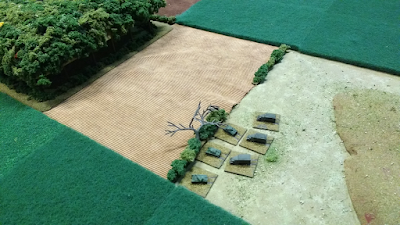 At the same time the third infantry platoon reached the T-70s. 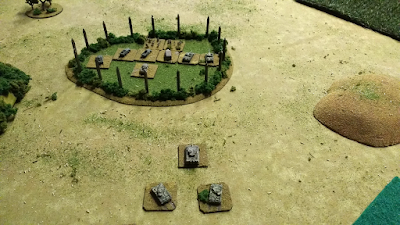 The Romanians began to disembark and establish themselves in the woods, 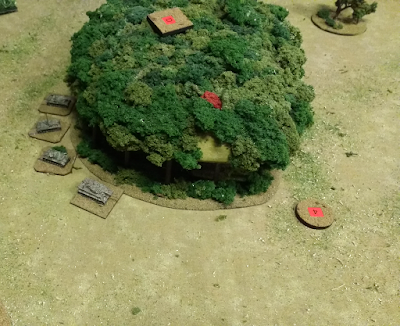 While the armour peaked around the corner to engage the T-34s. 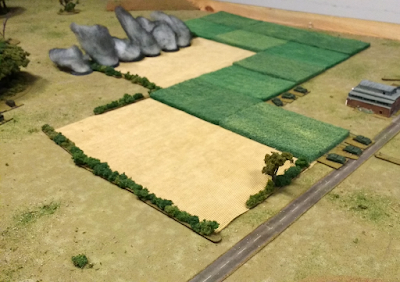 Thinking that they now had the Romanians pinned in place, the Soviets then moved up their T-34 85s and SU-100s in a fire support roll only for the Romanian mortars to fortuitously land a smoke screen directly in their line of sight. This meant the Desant platoon was on its own for now. However, the forward Soviet platoon had one ace up its sleeve, the KV-2. 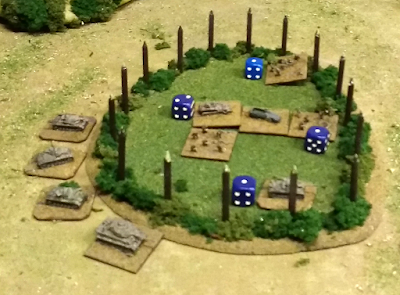 With a thunderous boom the KV landed a 152mm howitzer round amidst the Panzergrenadiers wreaking havoc. However, moments after the Soviets patted themselves on the back, a single round from the Tiger slammed home and brewed up the KV-2. Soviet morale was on a roller coaster ride. 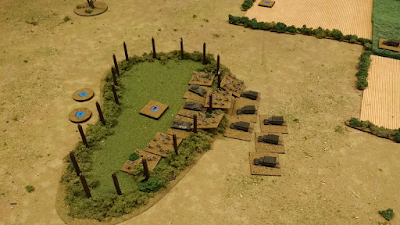 As if in fear of the big cat, the Desant platoon pulled back into the woods awaiting the disembarking of follow on infantry. 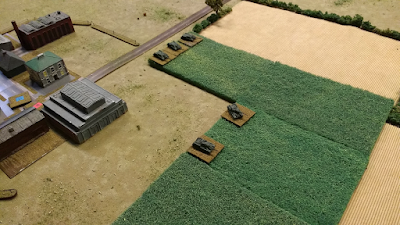 Then finally the smoke screen lifted and Soviet armour could engage but it was the Tiger that got off the first round destroying a T-34 85 in short order. The Romanians were ecstatic but the god of war does not favor those who put all their hopes in one unit. As one the three SU-100s fired on the Tiger with the third shot striking home and silencing the cumbersome cat. 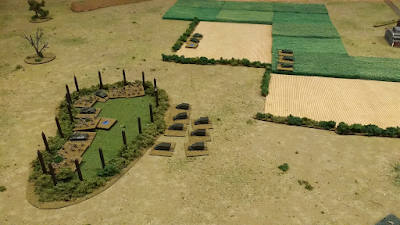 On que, the Soviet infantry moved back into their positions now reinforced. 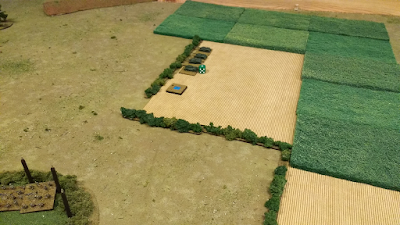 Sensing that the momentum had changed, the SU-100s advanced ready to strike into the flank of the enemy. 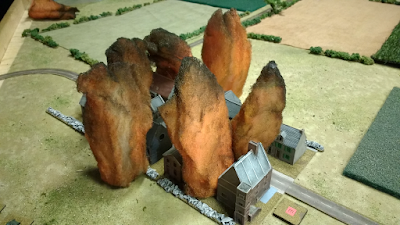 As if to add a soundtrack to the shifting of the fates, the Soviet battery of 122mm howitzers made their presence known. HE shells decimated the village on the Romanian right currently home to three SdKfz 222s. None of these lightly armoured cars would survive the onslaught. 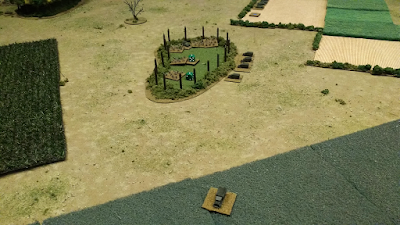 But the Romanians were not entirely out of the fight. Seeing the Soviet assault guns moving on their left, the T3s (Pz IIIN) moved to fire on the Soviet infantry. 75mm HE rounds rained down into the woods while the Marder II systematically destroyed the T-34s from long range. 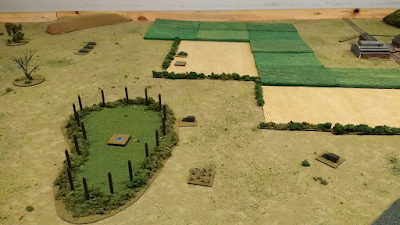 The effects from this coordination of fire was immense but unfortunately was not enough. With the SU-100s advancing on the left and the T-70s now occupying the cratered village on the right, the Romanian commander signaled the withdrawal.

We planned on this game taking 2 1/2 hours but we ended up playing for 4. Every time we thought that we should end the game it got more interesting. I am glad we played it to fruition as it felt so much more satisfying. Thank you to both Dave and AJ for a fun game. After a short break we moved on to Game 2.