Welcome back for part 3 of the gaming day! After having fought in the east and in space it was only appropriate that we move to the west, France! Having recently unpacked the Canadian platoon we decided that we needed to test two fully mechanized platoons in Chain of Command.

The write up for game one can be found here: http://amerematterofpainting.blogspot.ca/2017/10/saturday-gaming-trio-part-1.html

The write up for game two can be found here: http://amerematterofpainting.blogspot.ca/2017/10/saturday-gaming-trio-part-2.html 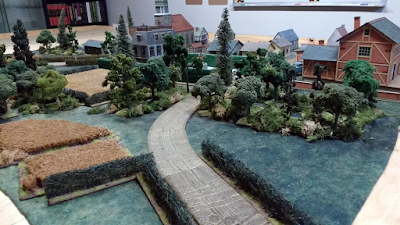 Having informed my father of the intention of this game and then moving upstairs to perform some admin he took to setting up the table. When I arrived back downstairs I was presented with this mess! The 4'x6' playing area was jam packed with obstacles and cover, not exactly the kind of terrain that mechanized forces are designed to play in. 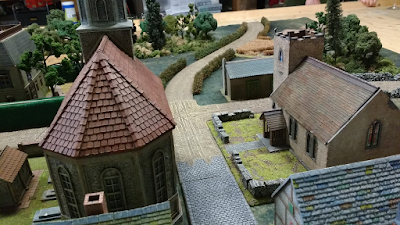 Short of two longer roads through the village their were few lines of sight longer than 50 yards. This was going to be quite silly. 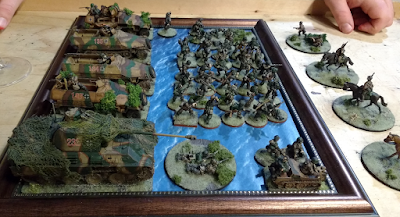 In the blue corner sat my Pansergrenadiers, fully mechanized in SdKfz 251 halftracks including the /17 with the 20mm Flak gun. Attached to this was a MMG team, a sniper team, and a Panther. (ignore the naval movement tray, the appropriate trays were occupied with figures from the first game) 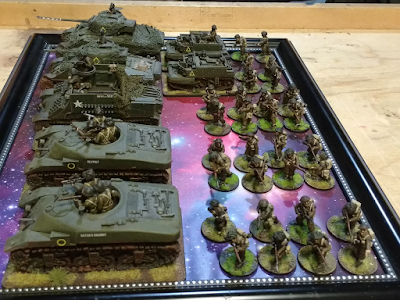 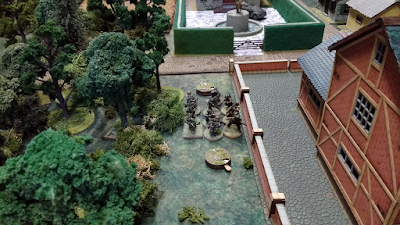 The Germans started with moving a section towards the warehouse. If you look closely you can see that these sections have two LMGs each and a smattering of assault rifles and SMGs. This project came about because of the Imperial Guard syndrome. 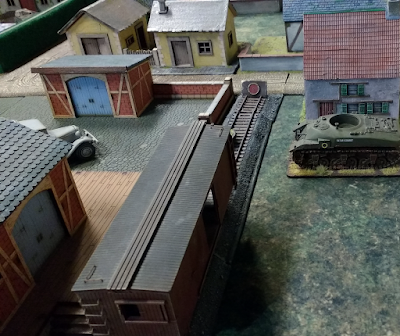 Counter to this, the Canadians deployed a section and its Kangaroo transport at the other end of the warehouse complex. 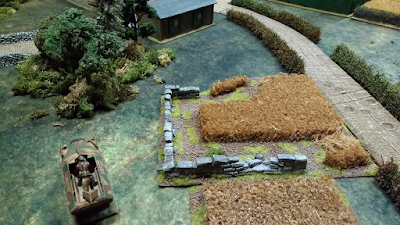 At the other end of the table another German section advanced in their halftrack attempting to do an end run around the flank. 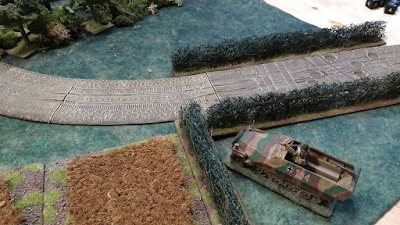 Meanwhile the first section's halftrack took up an overwatch position overlooking a road. 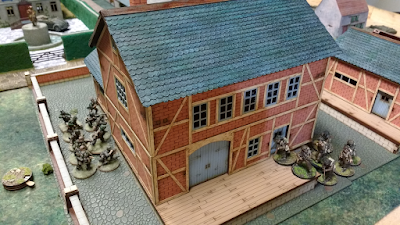 The German and Canadian sections raced to enter the warehouse first but it was the Canadians who arrived first. Yelling Handgrenaten, the German section charged into the building and in the ensuing fisticuffs, one Canadian and two Germans moved away to their respective lines. 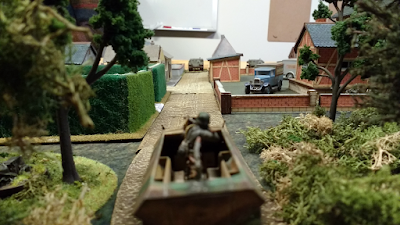 This left only the halftrack on the German right staring impotently at a Kangaroo. 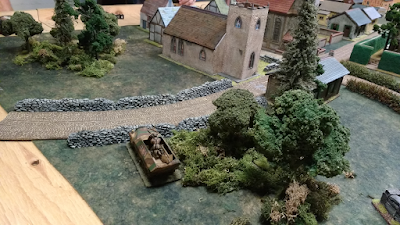 The flank run seemed to be fairing better for the Germans as the section prepared to cross the road. 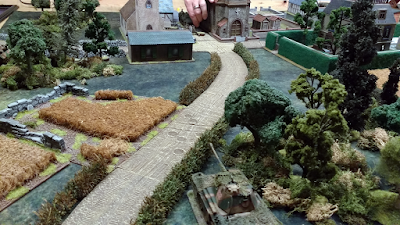 Ready to support this advance the Panther made its appearance. 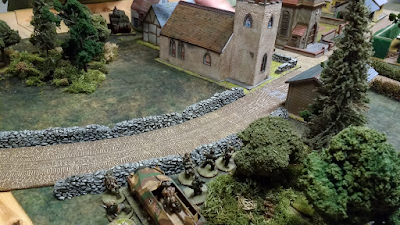 However, the Canadians had other plans. Appearing out of the mists a Sherman opened fire on the halftrack immobilizing it and forcing a dismount of its passengers. 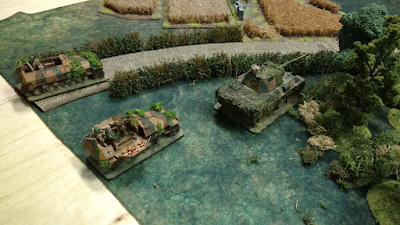 Not wanting to leave the injured section stranded, the Germans supported the push with the deployment of their last section and their senior leader with the Flak halftrack. 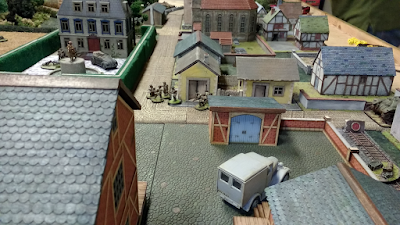 Sensing that the fulcrum had shifted to the opposite flank the second Canadian section began to make its way across the village as the MG42 team scrambled to get into the mansion. 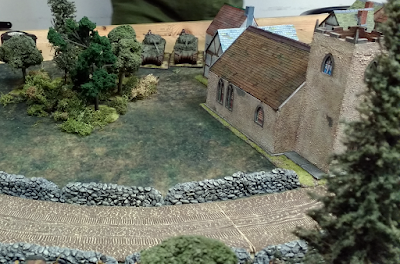 Having fired on the halftrack again and failing to destroy it again, the Canadians deployed the Firefly (a bit of overkill if you ask me). Loosing a high velocity round the Firefly crew was frustrated to see that they had missed. 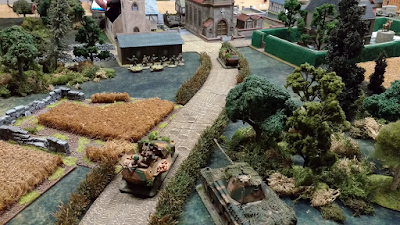 With the appearance of the final Kangaroo and its passengers the Panther attempted to land an HE round in the street but mostly just hit buildings. 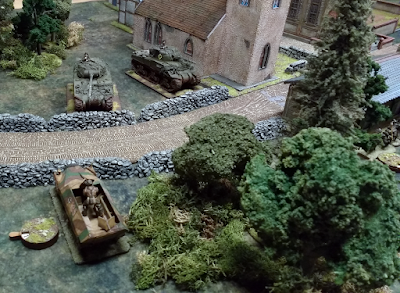 At this point the Canadian tank crews were vibrating with frustration and moved to point blank range to eliminate this unimportant halftrack. A mere dozen yards away the Firefly fired again only to see the high velocity round go completely through the halftrack with no apparent effect. The halftrack defiantly fired its MG at the tank. 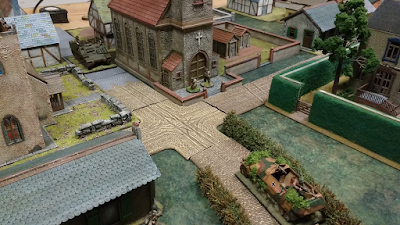 With the Canadians having left the open street for adjacent buildings, the remaining German section advanced up the road preparing to disembark and initiate another deadly assault. However, as they approached the cross roads, the church door was swung open and two men appeared in the doorway. 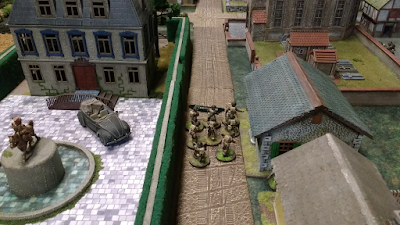 Still assuming that the outcome of the battle was in question, the other Canadian section was witness to a grey streak and a loud boom. 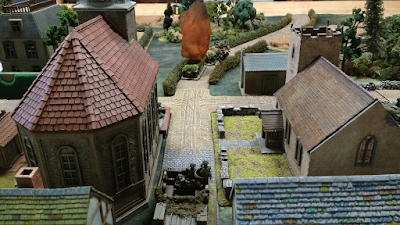 The game had been won with a PIAT!

Thank you to AJ and Dave for an educational game, the next time we use these forces lets remove at least half of that terrain!

The rules we used were Chain of Command by Too Fat Lardies.