Skip to main content
Labels
Posted by Man For All Seasons April 01, 2020

Good morning everyone; in light of all of us being (rightly) stuck in our homes I endeavored to find a way to relieve some of the collective boredom and scratch at least a small portion of the gaming itch felt by my local gaming group. This intention plus the fact that I have just finished a large batch of Star Wars models resulted in the idea for a campaign.

The concept is that two of my friends, Matt and Will, run the map side of the campaign; moving assets around the map, making strategic decisions, etc. Battles resulting from this campaign are played out by myself and my wife or in the case of very quick and small games, solo. So far I have achieved the goal, all four people involved have been having a good time.

I am starting this series of posts well behind the current status of the campaign which is currently prosecuting turn 11. This is to ensure that any slip up of mine in writing does not reveal any sensitive information to either player who are not sure of each others positions and movements.

This campaign is centered on the Ado Sector in the mid rim and is set six months after the destruction of the second Death Star. The Emperor and Darth Vader are dead. The Empire still stands as a unified state under Sate Prestage but cracks are beginning to show and as anyone familiar with the old EU knows, the house of cards is about to come crashing down.

But this isn't a story about the larger geopolitical implications of this collapse. Rather, the focus is on a lonely Imperial Admiral desperately trying to maintain order in a backwater sector while dealing with a shortage of resources. The Moff for this sector has already abandoned his post and fled for Coruscant. The Grand Moff of the Over-Sector has all but abandoned the Ado Sector, believing it to be a lost cause and stripped much of the naval power from the area. Admiral Risser has no shortage of problems.

The Alliance Admiral opposing the Empire in this area has been tasked with conducting a campaign into this sector to foment Rebellion, gather allies, and ultimately wrest it from the control of a failing state. He, however, also does not have the deepest pool of resources to draw from and must make do with whatever Alliance Regional Command can spare for his efforts.

The map is a simple hex grid with a few dozen star systems, most of them unimportant. The light blue lines represent fast hyperlanes while the dark blue represent slower hyperlanes. The multitude of alternate routes between systems are not represented, instead abstracted by allowing starships to move about freely but at a significant speed disadvantage when not using the primary hyperlanes. The capital of the sector is the Indupar system which contains noteworthy defenses and a shipyard capable of conducting repairs on starships as large as Star Destroyer sized.

At the beginning of the campaign the Imperial player was required to distribute their limited assets around the sector not knowing from where the Rebel attack would come nor where their supply lines would originate. Additionally, the primary mechanic at work for the Imperial player was the loyalty of the systems. Each system has its current loyalty and value to the sector tracked. Maintaining assets in any given system will provide a temporary boost to the system's loyalty as well as a possible permanent increase. The actions of both players can also affect individual system loyalty such as military victories, propaganda efforts, ongoing revolts in other systems, and other esoteric actions that the players are free to brainstorm. As the game master, I reward creativity.

The primary victory mechanic is the total system control. Each system's value is multiplied by the system's loyalty, always between 0 and 1. The total of all these values gives a percentage control of the sector. If the sector control lowers too far the Grand Moff will cut off all supply entirely and the campaign is effectively lost. However, the higher the control is, the greater the quantity and quality of the reinforcements Admiral Risser will receive. It is important to note that the Rebel player cannot see the details of these values and must therefore infer them from events and his opponent's actions.

The campaign began with both players maneuvering about the map and probing each other with Probe Droids and starfighter patrols. Within the first few turns the first battle occurred.

The 1st Battle of Omicron-Ceti

The first major action between the two sides occurred in the Omicron-Ceti system, a mining colony specializing in the extraction of Tibanna Gas from the system's gas giants. A small Rebel group consisting of four Marauder Class Corvettes had entered the system and made contact with a resistance cell on the ground. They quickly utilized their on-board starfighter squadrons to assist the cell in openly revolting against the Imperial authorities. This revolt continued for ~ 1 day until Imperial starships arrived. 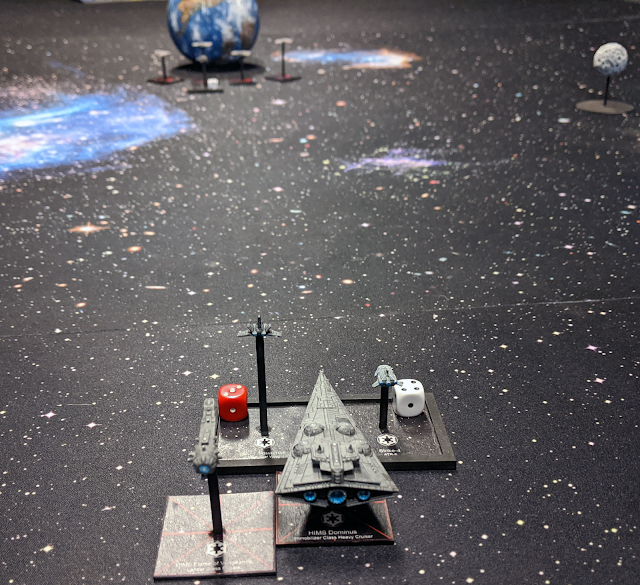 Exiting hyperspace at about 200,000km from the main planet, the HIMS Dominus, an Immobilizer Class Heavy Cruiser, sailed in system. Escorting the Dominus was the HIMS Flame of Vengeance, a Lancer Class Frigate. The Dominus had also pre-launched her embarked XG-1 Star Wings and ATR-6 Assault Transports. Moments after entering the system the Dominus activated her gravity well generators. 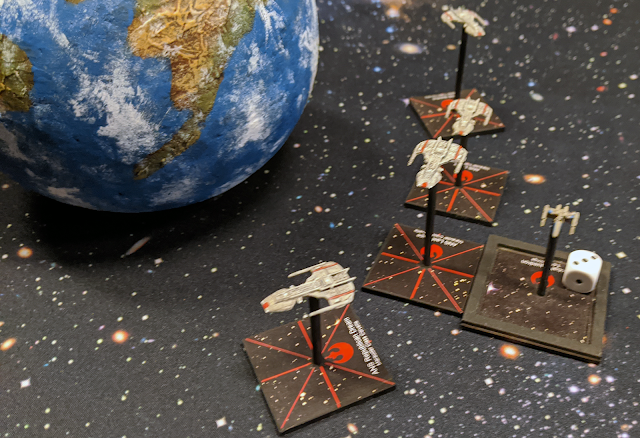 The four Alliance ships, the ANS Baleful, Lucky, Republican Dream, and Last Hope, were in low orbit of Omicron-Ceti Prime supporting the revolt with precision starfighter strikes against ground targets. This was an inopportune time to be engaged in space combat. 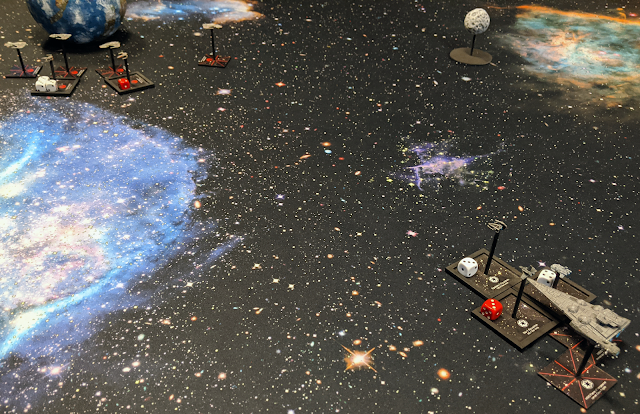 As the Dominus screamed into the system trying to keep the enemy ships inside her interdiction field, she began launching her TIE squadrons. Unfortunately, she only carried a squadron of TIE/Ln Fighters and a squadron of TIE/In Interceptors. 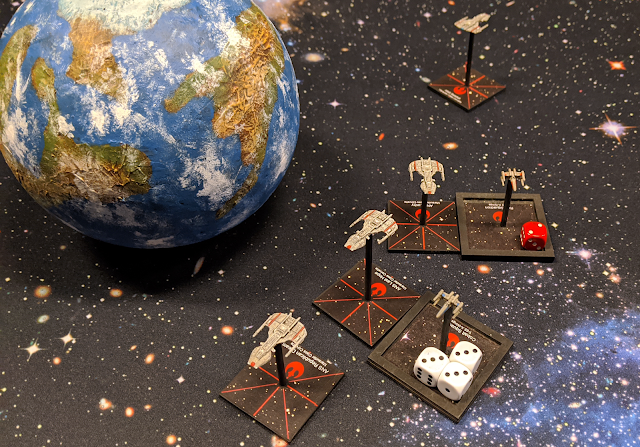 The four Alliance Marauder Corvettes recalled their squadrons from the surface and began accelerating out of orbit hoping to round the planet and use it as a shield. All four squadrons of Rebel fighters were T-65 X-Wings. 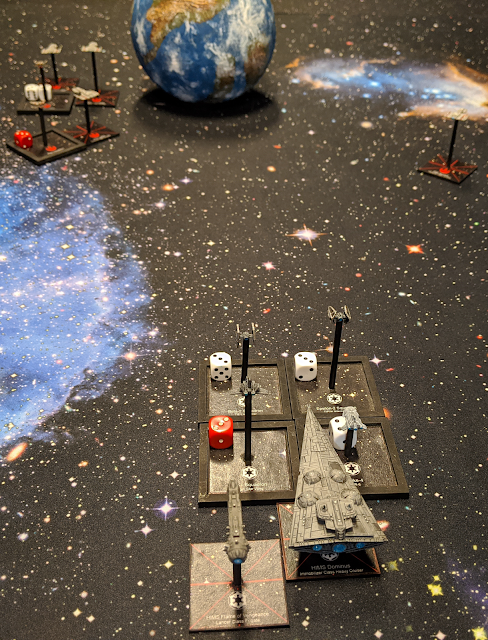 As the range closed it became apparent that one ship was not with the rest. The ANS Balefull had turned the opposite way from the rest. Was this a distraction, an attempt at a blocking force? 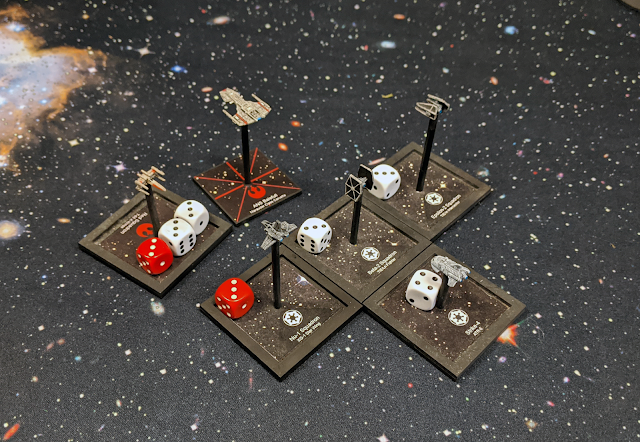 Rather than turn her guns on the errant corvette, the Dominus chose to launch her squadrons to engage the lone ship. The Rebels, having landed one of their X-Wing squadrons to reload on ordinance, had three squadrons of X-Wings to block this maneuver, one of which was loaded with concussion missiles. The ensuing combat saw all three X-Wings fall to a combination of missiles fired from the assault gunboats and the following dogfight with the TIE Fighters and Interceptors. In response the TIE Interceptors were destroyed and the XG-1s took a beating. This left the Balefull open and the ATR-6s took the opportunity to land their stormtroopers onto the ship. One captured ship, many prisoners to interrogate. 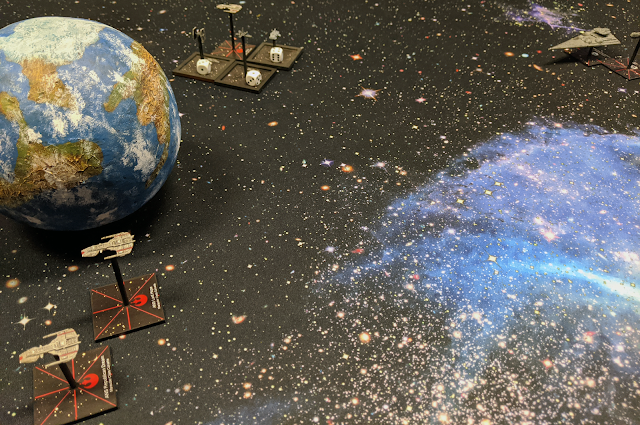 Meanwhile the Dominus chased after the fleeing Rebel ships and concentrated her firepower on the ANS Lucky, destroying her.

As the chase continued, the Republican Dream and Last Hope managed to get behind the planet, blocking all fire. The Dominus recalled her gunboats and transports for rearm and reload. 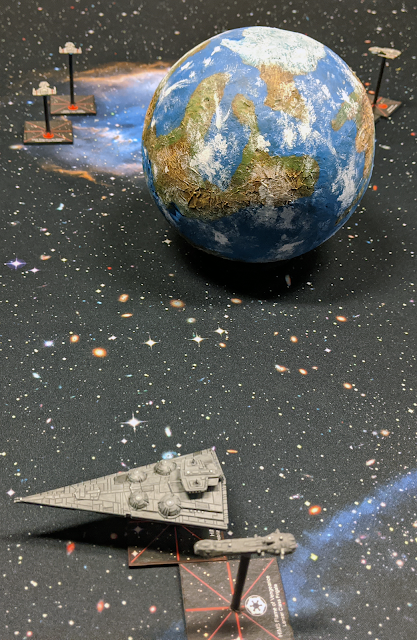 Unfortunately, the Dominus still had a temporary speed advantage, even if she couldn't accelerate as fast. She rounded the planet enough to get her starboard batteries in line of sight to the fleeing Rebel ships. Long range fire hit the Republican Dream and caused light damage. Critically, both corvettes had overtaxed their engines trying to flee the much bigger Dominus and the Republican Dream had blown out one of her engines cutting into her future acceleration significantly. 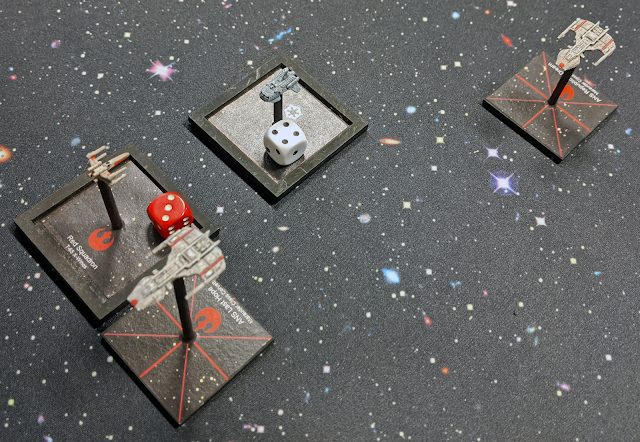 But the maneuver the corvettes had performed worked and they started to open the distance. In one last attempt to hurt the Rebels, the Dominus launched her ATR-6s again, reloaded with fresh stormtroopers. Unfortunately, the X-Wing squadron the corvettes had been hiding in their hanger bays also relaunched with concussion missiles loaded. The ensuing fight was no contest and the X-Wings trashed the incoming transports. Soon after the two remaining Rebel ships sailed out of range of the Dominus' interdiction field and fled into hyperspace.

The HIMS Dominus had wrested control of the system back from the Rebels, destroyed one corvette and captured another. The Imperials immediately established orbital control and began interrogating their prisoners. There was just the problem of the ongoing revolt on the planet and the Dominus had just lost her assault shuttles and much of her stormtrooper compliment.

The campaign continued from here and more battles followed. The next post will detail the days following the 1st Battle of Omicron-Ceti, a name which should indicate future events.