Skip to main content
Labels
Posted by Man For All Seasons April 21, 2020


Happy Tuesday space campers. The Archanis Campaign has been flying along and a number of small skirmishes took place in the first few turns. 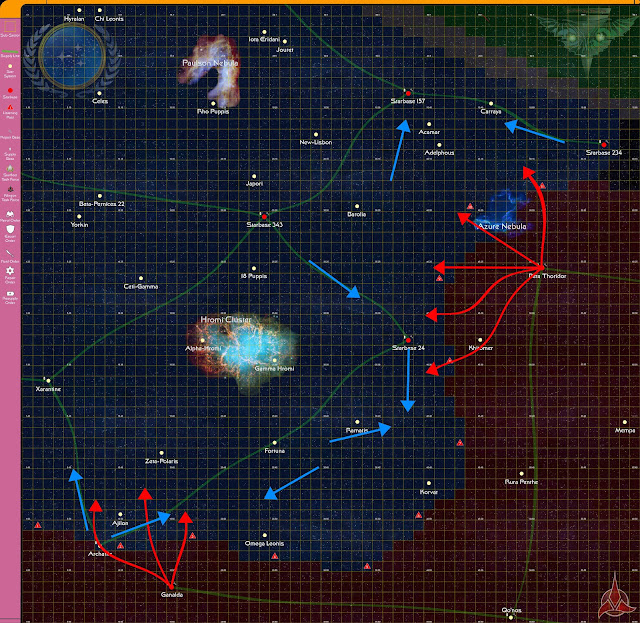 The campaign opened with cautious moves by House Korath in the coreward end of the engagement zone, near Romulan space. Every Starfleet warp signature detected in this area moved away from the advancing Klingons. However, at the rimward end, House Antaak struck deeper into Federation space aiming for Archanis, Ajilon and Zeta-Polaris. Here too, Starfleet seemed to pull back in the face of the mighty Klingon fleet. But the evolving situation was not without incident. House Antaak's main fleets were preceded by scouting groups of Birds of Prey. Operating in squadrons of six vessels, these ships were acting as the forward eyes of the invasion. They were also easy pickings for the scattered Starfleet forces.


Suddenly, some of the retreating Starfleet ships turned around and intercepted the Klingon escort screen. 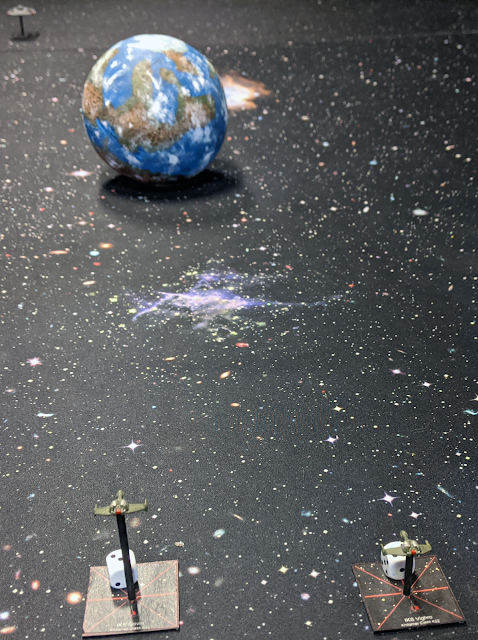 Six B'Rel Class Birds of Prey entered the Ajilon system, scouting ahead of the main fleet and the system appeared empty but long range sensors showed a single warp signature inbound. The Klingon squadron leader deemed that a lone Starfleet vessel could likely be dealt with. He thought that until the ship dropped out of warp. 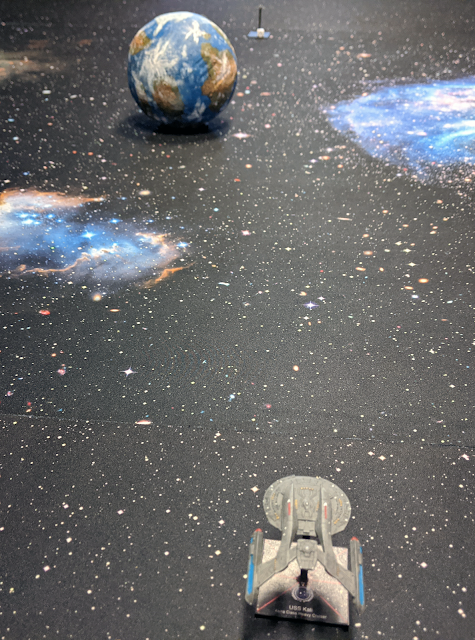 Being used as a fast reaction force, an Akira Class Heavy Cruiser had pounced on the intruding Klingons. Six B'Rels wouldn't be enough. 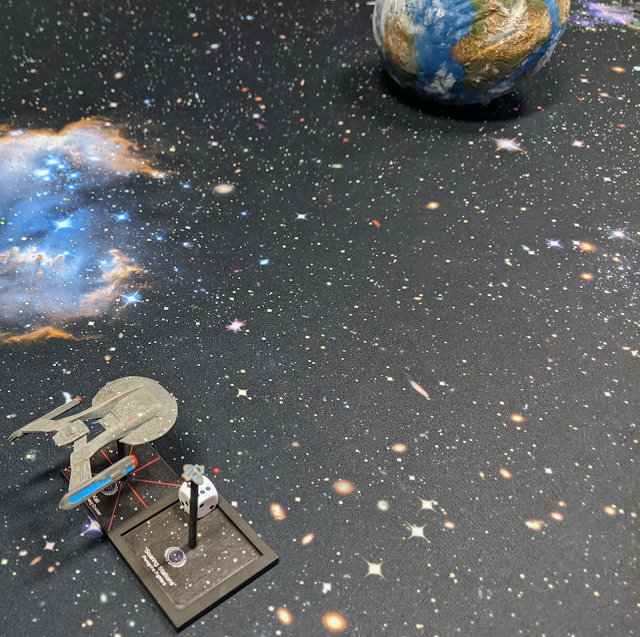 Adding insult to injury, this Akira also had an on-board compliment of Peregrine Attack Fighters, though only six of them. 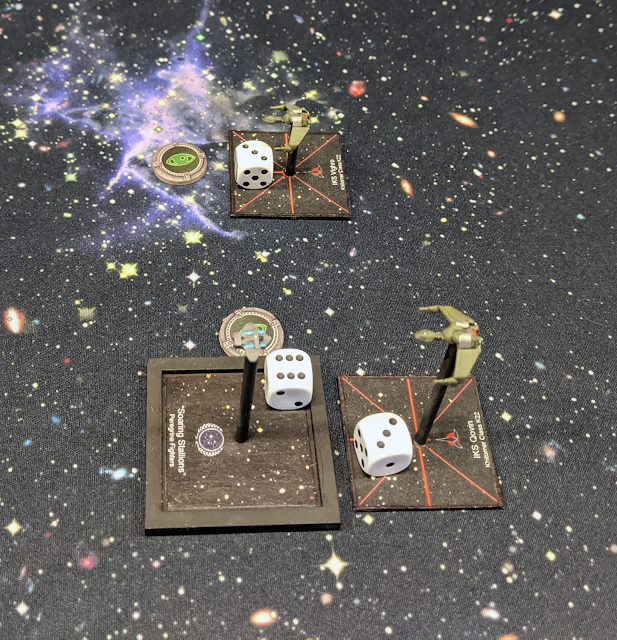 The Peregrines quickly closed the distance to the Birds of Prey, and though they were cloaked, the fighters simply flew up to point blank range and fired on the visual distortions. In short order three B'Rels died. Just to starboard, the other three Birds of Prey were subject to a blind bombardment of photon torpedoes from the Akira. This is normally a futile endeavor for a starship, but the Akira's vast array of torpedo tubes is not normal. One lucky torpedo managed to hit a Bird of Prey, which of course did not have shields up while cloaked, destroying the starship instantly. 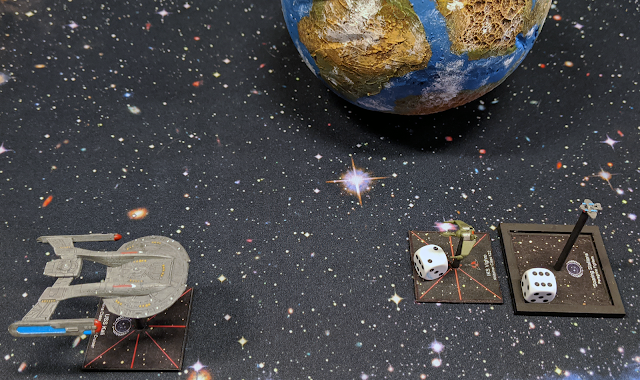 In a desperate charge, the Klingons sailed in to close range and loosed a few torpedoes at the Akira hitting her shields and scorching her paint through splash damage. The last two Birds of Prey ceased to exist moments later. 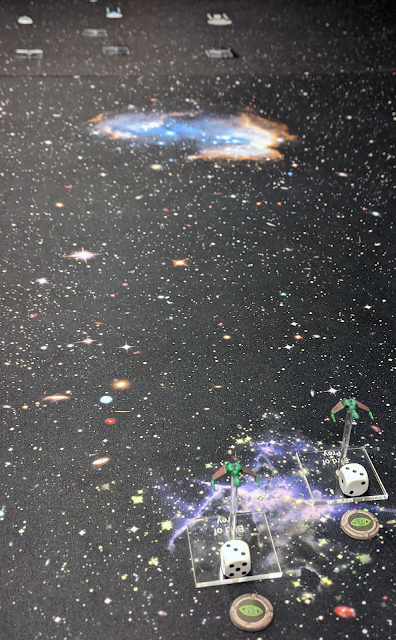 Only light years away and at nearly the same time, another squadron of B'Rels encountered a group of four Starfleet vessels. These Starfleet ships had run down the Birds of Prey who were forced to drop out of warp. 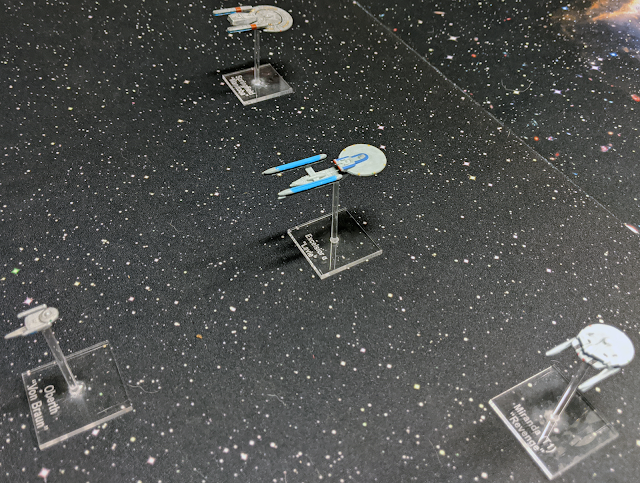 While this engagement did not have the awesome torpedo power of an Akira, it did have an Excelsior Class Explorer, Springfield Class Frigate, Miranda Class Destroyer, and an Oberth Class Science Vessel. The Oberth was obviously the linchpin to this task force's future success. 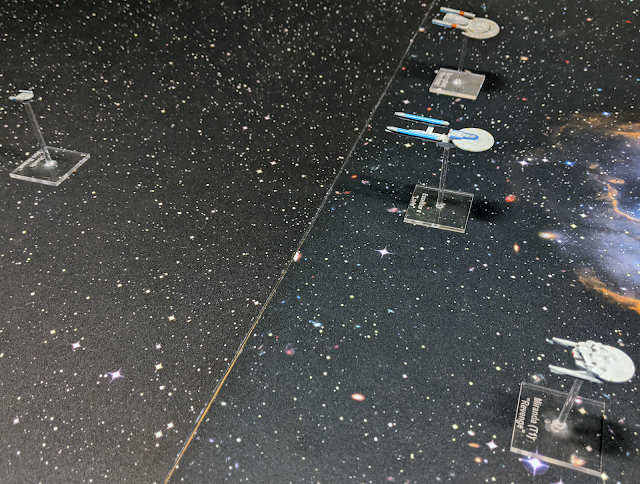 The Starfleet vessels, after dropping out of warp to the Klingons stern, immediately punched it with their impulse drives, except for the most important vessel in the group, the Oberth, which hung back. 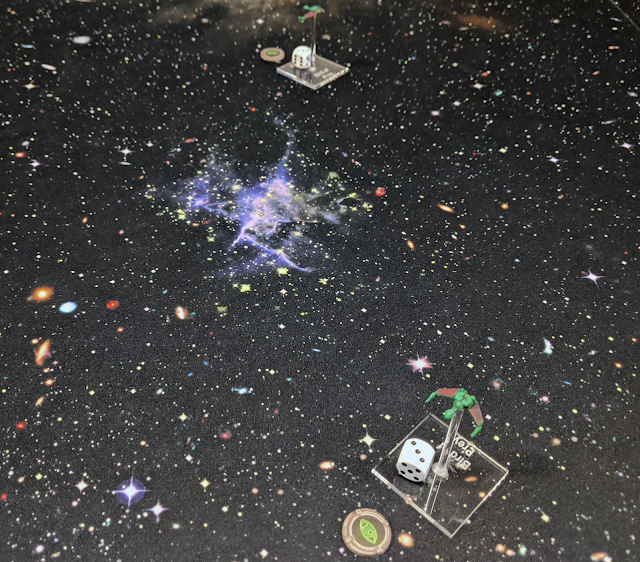 The Klingons came about and split onto two different vectors hoping to split up the Starfleet force. 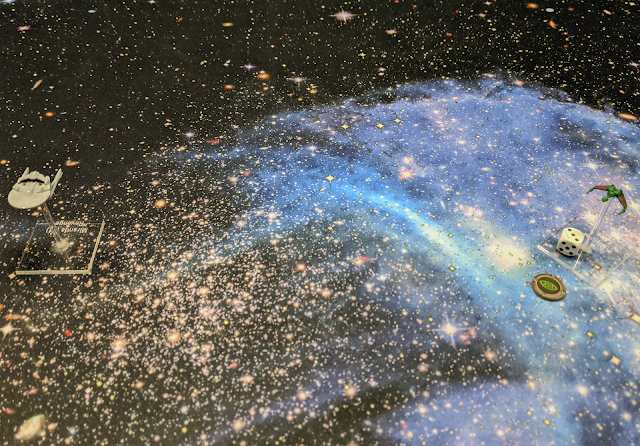 Three B'Rels faced the Miranda which turned to starboard to prevent them from reaching the Oberth. The Klingons on this flank dropped cloak and loosed torpedoes at the old destroyer dealing significant damage to her primary hull. For their efforts the Birds of Prey were hit by no return fire.

On the other flank, the remaining Birds of Prey danced with the Excelsior and Springfield. It became apparent quite quickly that the Springfield had an SWAC pod installed as she and the Excelsior speared one ship even while it was cloaked. 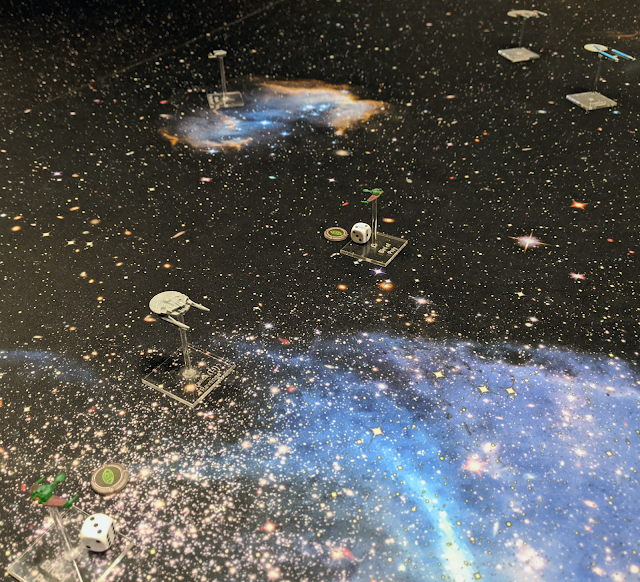 In the dance that proceeded, the Miranda faced three Birds of Prey attacking her flank at close range while the remaining two had faked out the larger ships into turning the wrong way giving her a clear line of fire on the Oberth. In seconds the Miranda was destroyed by Klingon torpedoes and the Oberth followed moments later. However, the return fire destroyed three of the five Birds of Prey. The following command roll saw the Klingon morale break. The rules state that a fleet loses at this point, however, being a campaign this could mean surrender or perhaps a failed attempt at retreat. You decide.


The following week of the campaign continued to see Starfleet retreat in the face of the Klingon advance. Archanis fell to a ground invasion followed by Carraya where House Korath established a forward supply base. Meanwhile the scouting parties of both houses pushed deeper into Federation territory until two more were intercepted by Starfleet, this time it was House Korath who would lose some Birds of Prey. 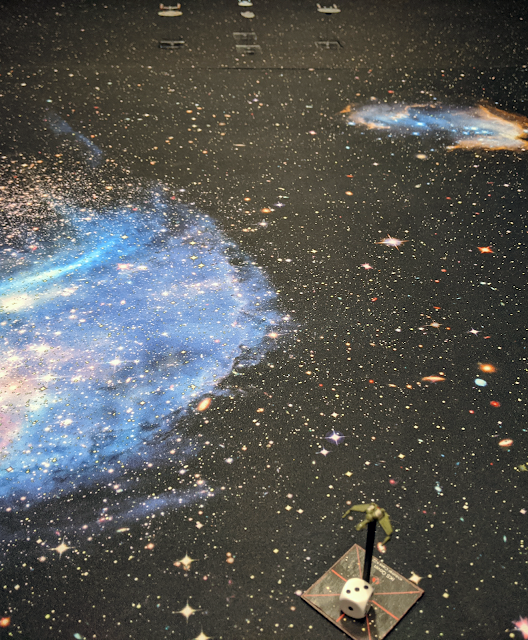 Near Starbase 24, a squadron of three B'Rel Class Birds of Prey noticed Starfleet warp signatures in hot pursuit. Unable to outrun the pursuers, the Birds of Prey dropped out of warp and prepared to fight. 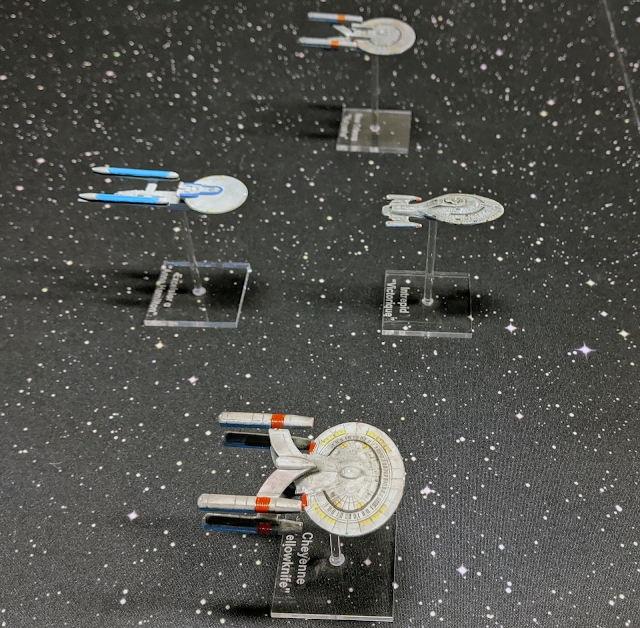 This task force of Starfleet ships included an Excelsior Class Explorer, Intrepid Class Light Explorer, New Orleans Class Frigate, and a Cheyenne Class Frigate. Aside from the Akira, this was the strongest Starfleet force to hit the table yet.

The two sides closed together at a good rate with the Birds of Prey launching torpedoes and missing with every one. Starfleet blindly fired every phaser and torpedo in arc and in a stroke of either luck or probability, felled one Bird of Prey. 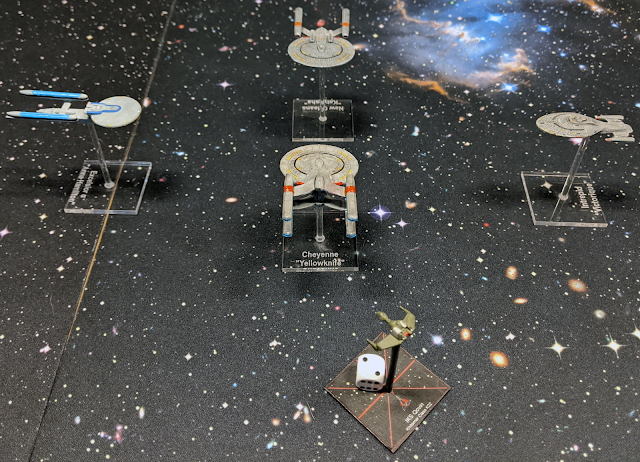 Realizing that the Klingons were about to be inside their formation, Starfleet performed a curious maneuver. The Excelsior hit the brakes, the Cheyenne and New Orleans turned inwards, and the Intrepid flipped end for end. This ensured that all arcs were covered by torpedoes and phasers. The two remaining Birds of Prey fired torpedoes into the Cheyenne scoring hits on her nacelles but they quickly died now that their cloak was down. 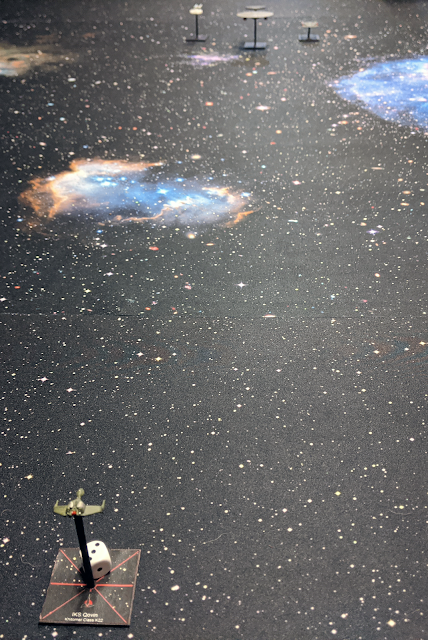 A few days later and only a few light years coreward, three more Birds of Prey from House Korath encountered another Starfleet taskforce. 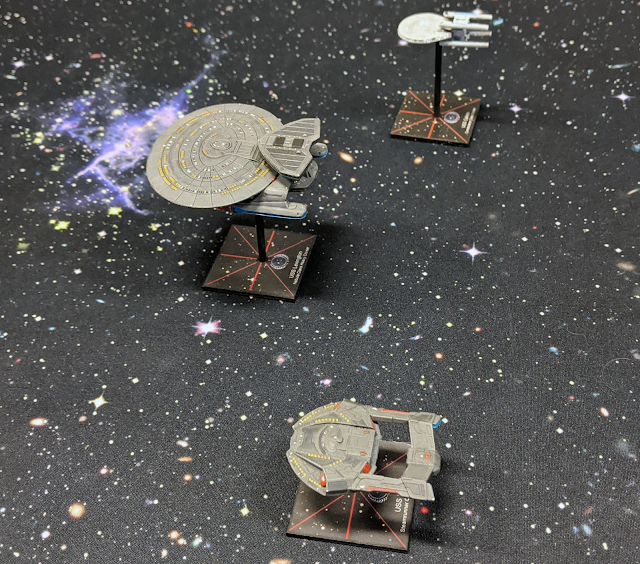 This time Starfleet had brought out the big guns in the form of a Constellation Class Cruiser. The Nebula beside her was more a hindrance. The Steamrunner was ok.

The Klingons were again faced with flying into the front of a Starfleet group bristling with torpedo tubes. Thankfully this time the gods of probability were with them as they managed to close the distance intact. 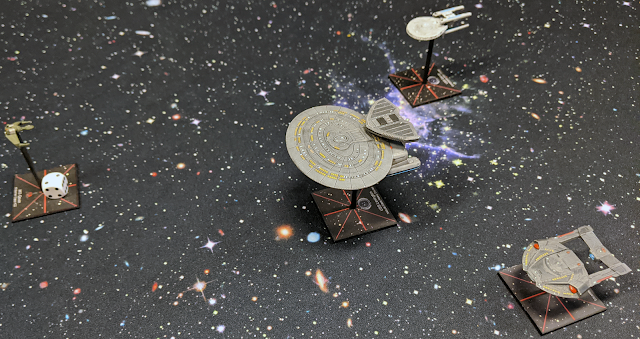 However, once they reached close range, the Nebula managed to get a partial lock on the Klingons and speared one with two phasers. As compensation the Birds of Prey landed a few torpedoes on the saucer section of the big ship, scorching her hull. The wing-tip disruptors merely splashed on the powerful shields. 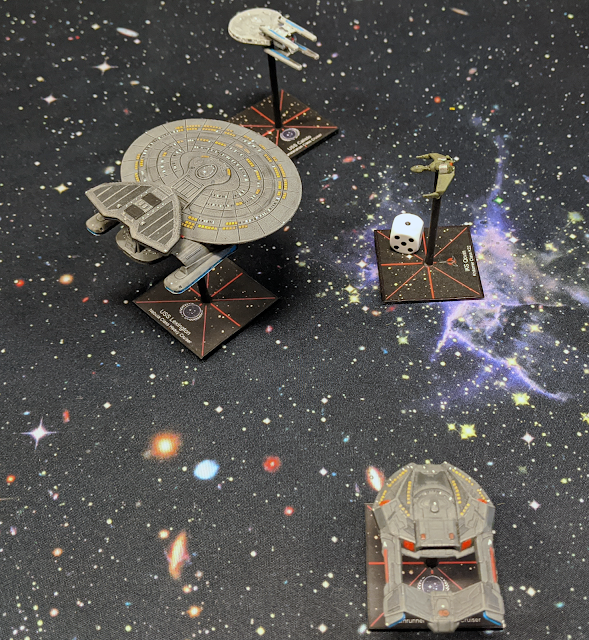 This Starfleet group attempted a similar maneuver as the previous encounter with less success. However, it mattered little as the two remaining Birds of Prey were at point blank range to the Nebula which promptly destroyed one. The remaining Klingon ship swiftly attempted to retreat and was destroyed.

This accounts for the first two weeks in campaign and nothing beyond skirmishes and the continual retreat of Starfleet has occurred. I think the Klingons had actually gotten nervous due to the lack of resistance. In two weeks of fighting they had conquered two systems, including the namesake for the war, and only lost twelve B'Rel Class Birds of Prey.

That all changed in the next week.

The rules for the tactical game play is Metaverse Second Edition, as yet unreleased. The first edition can be found here.