Skip to main content
Labels
Posted by Man For All Seasons April 03, 2020

Welcome back; the Ado Sector Campaign continues to rage as the forces of the failing Galactic Empire desperately try to halt the efforts of the Rebel Alliance to foment disorder. After the 1st Battle of Omicron-Ceti, the two forces continued to jockey for position, the Rebels poking and prodding at Imperial systems across the western half of the sector.

In the Tylaq system, Rebel marines from the ANS Paragon performed a daring raid on a mining settlement and liberated 500 Twi'lek slaves, dealing a morale hit to the Empire and winning a crucial propaganda victory. Before the Paragon could rescue more helpless Twi'leks, it and its escorts were forced to flee the system in the face of superior Imperial naval strength.

Rebel ships traveled to the Killisu system and made contact with the remnant of a pirate group hiding there. These pirates once prowled the depths of the Starforge nebula before being nearly destroyed by the Empire. Negotiations to join forces proceeded quickly with the Rebel forces searching the abandoned orbital infrastructure in the system for any material that might be useful. Unfortunately, before this tentative alliance could bear fruit, the Rebel fleet in system was forced to withdraw due to Imperial starships entering the system. The Rebel fleet would later return to Killisu to discover a horrible truth.

In the south-central area of the sector, Rebel squadrons played a game of cat and mouse with their Imperial opposition. Rebel starfighters and corvettes scouted out the Imperial systems looking for weaknesses or potential allies while the Empire scoured space with probe droids, bouncing their heavy ships from system to system as the Rebels revealed themselves. It all felt like a space-borne game of whack-a-mole. Until Vanda.

Having danced with the Rebel fleet in the proceeding week to great frustration, Admiral Risser devised a plan to pin the elusive Rebel forces. The target he most desired was the sole Rebel capital ship thus far observed in the campaign, a Dauntless Class Star Destroyer. 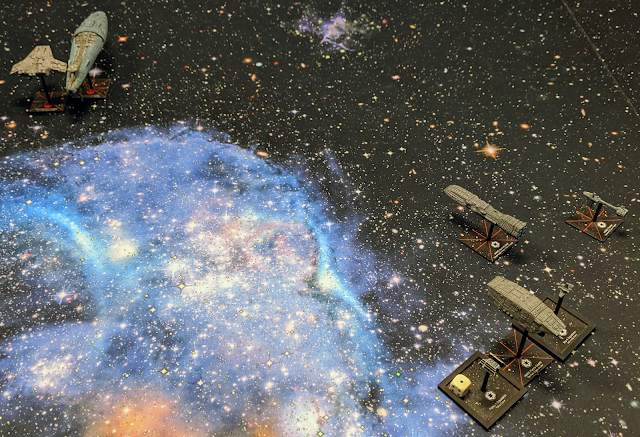 The Rebel ships performed a micro hyper jump outside the system with the intention of then re-orienting and jumping again to shake any pursuers. However, this was what the Imperials wanted. Lying in wait outside the system was a group a Imperial starships. Given a vector by the Adamant, this group of ships pounced on the fleeing Rebel ships. The HIMS Apocalypse, Dreadnought Heavy Cruiser, HIMS Fury's Depth, Ton-Falk Class Cruiser, and HIMS Praetor, Nebulon-B Class Frigate, had caught the heavy Rebel ships. The Savior of Ryloth could have jumped away but after a quick analysis of the firepower differential saw this as an easy way to dispatch some medium Imperial vessels. The battle was on. 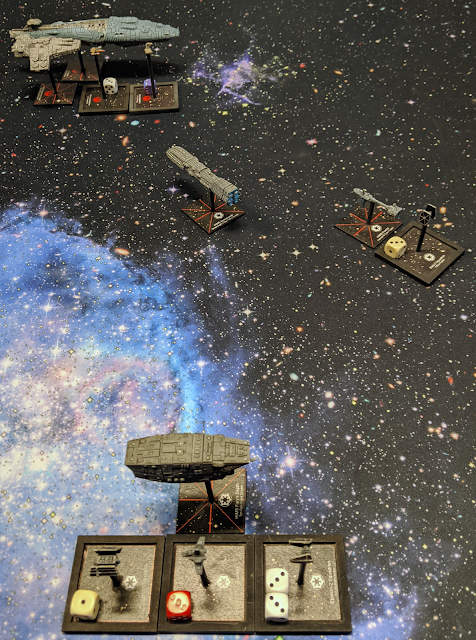 The ANS Freedom's Grasp immediately activated her interdiction field to prevent the Imperials from escaping and the two ships began to turn to starboard to bring the preponderance of their weapons on to target. The Fury's Depth turned away from the Rebel ships, its limited firepower not needed in this fight, and its starfighter compliment would still be well in range. The Apocalypse charged at the Savior of Ryloth firing all its medium turbolasers at the Freedom's Grasp as it sailed in. This move was intended to make the ship appear as a bigger threat than it was.

It worked. Every weapon in arc on the two Rebel ships tore into the Dreadnought first bringing down its shields and then tearing through the forward hull. The ships were at very close range making the heavy turbolasers on the Savior of Ryloth that much more potent. In short order the Apocalypse had lost most of her forward section.

In Metaverse 2.0 there is a mechanic called Threat. Every starship design has a threat rating derived from its weapons, EW capabilities, maneuverability, and power consumption. This threat is multiplied by an enemy starship's Crew Discipline (expressed as 5,10, or 15cm) to determine the Danger Close range for that starship. When a ship is considered Danger Close, every weapon capable of firing on the target must fire on the target, regardless of the wishes of the player. This can be used to great effect with escorts and screening vessels or in this case with a mad Dreadnought captain trying to keep the enemy turbolasers off an escort carrier. 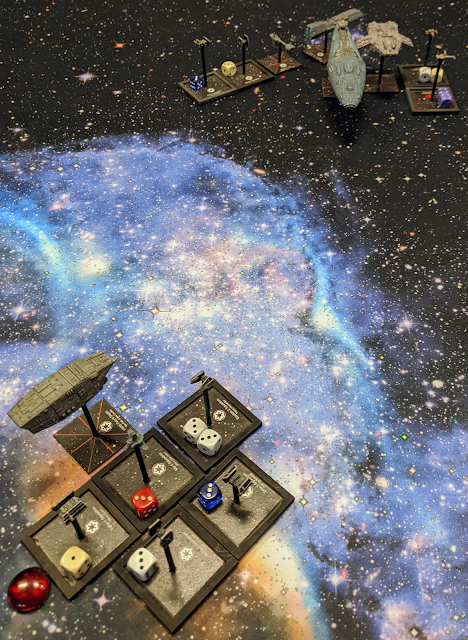 As the starships passed by each other, the Savior of Ryloth found that her forward guns were now clear to engage the escort carrier. Ion cannons and turbolasers lashed out forward at the Fury's Depth and rearward at the Apocalypse. It did not take long until the Apocalypse drifted as a burned out hulk. The Freedom's Grasp did not come out unscathed, however, as the Dreadnought fought until her last moment pouring medium and light turbolasers at point-blank range into her shields. 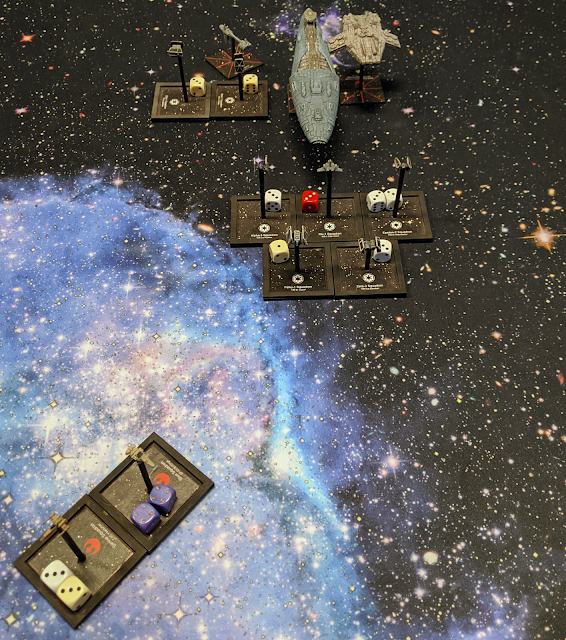 The battle was far from over, however, as the Rebel starfighter group flew to the Fury's Depth intent on taking advantage of her depleted shields. Two squadrons of Z-95 Headhunters escorted two squadrons of B-Wings laden with Plasma Torpedoes. Curiously, the lonely escort carrier launched all her starfighters at the Rebel starships. A squadron of TIE/Sa bombers loaded with proton torpedoes directed by a flight of TIE/Sr Scouts were escorted in by two squadrons of TIE/In Interceptors, a squadron of TIE/Ln Fighters, and a squadron of XG-1 Assault Gunboats. The Praetor launched her own bombers with escorts as well. The Rebel fighters decimated the defenseless escort carrier. In return the Imperial fighters loosed proton torpedoes into the Freedom's Grasp causing widespread damage and system failures, including her hyperdrive, though not without losses. The Rebels seemed content with this outcome as their starfighters utterly destroyed the Fury's Depth leaving a lone Nebulon-B to fight the Rebels and they had all the time in the world to repair the interdictor cruiser. 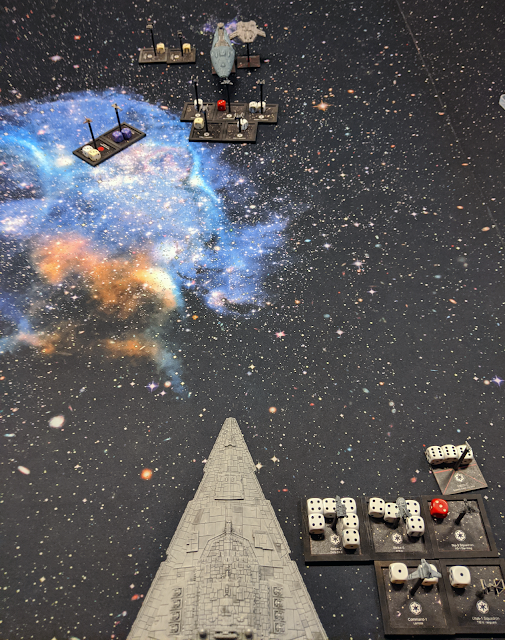 That's when the other shoe dropped. The Imperial squadron engaging the Rebels was only meant as a blocking force to give enough time for the HIMS Adamant to reacquire them. In a flash of radiation the Imperial Star Destroyer emerged from hyperspace at the edge of the Freedom's Grasp's interdiction field. Surrounding her was a cloud of hyper capable craft including TIE/Sr Scouts, XG-1 Assault Gunboats, Lambda Shuttles, ATR-6 Assault Shuttles, Delta DX-9 Assault Shuttles, and Gozanti Gunships. 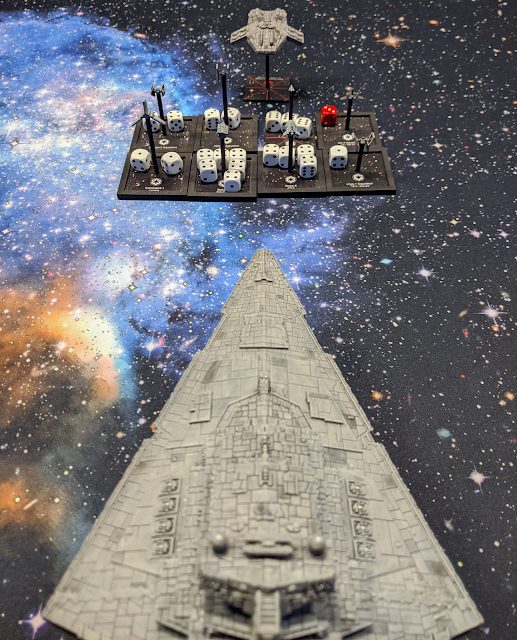 Faced with a giant triangle of death, the Savior of Ryloth made the only decision it could, it ordered the Freedom's Grasp to deactivate her interdiction field and abandoned her to the Imperials. In short order the Empire boarded the cruiser and took the crew prisoner.

This battle was hard to quantify in terms of victor. The Imperials lost a heavy cruiser and an escort carrier but took out a strategic level asset of the Rebel fleet. Both sides felt like they had won and lost.


The 2nd Battle of Omicron-Ceti

So far in the campaign, the Omicron-Ceti system had been the center of much activity. The Rebellion had fomented revolt on the planet, a revolt that was still raging, and the 1st battle of Omicron-Ceti had been a decisive victory for the Empire. Since then efforts had been made to stamp out the resistance on the primary planet with many insurgent leaders killed. Then conflict came again to this frontier system. 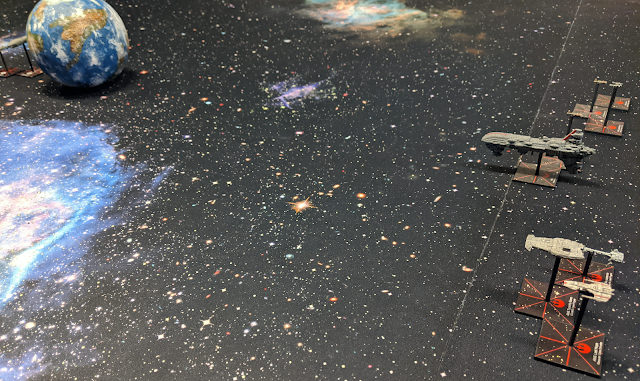 The HIMS Kingmaker, a Strike Class Cruiser, had been assisting the local garrison of Omicron-Ceti Prime in stamping out the ongoing revolt to great success. In a moment her situation changed. Emerging from hyperspace as close to the planet as possible, a Rebel fleet stood to force the Imperials out. The ANS Paragon, an Assault Class Heavy Cruiser led a force consisting of a CC-9600 Frigate, Nebulon-B Frigate, Marauder Corvette, two Braha'tok Corvettes, and two Hammerhead Corvettes. The Kingmaker had at her disposal a Bayonet Frigate and a Tartan Frigate. The force disparity seemed one sided but the Captain of the Kingmaker believed he could leverage his position and cause serious losses on the Rebels so chose to stay and fight. 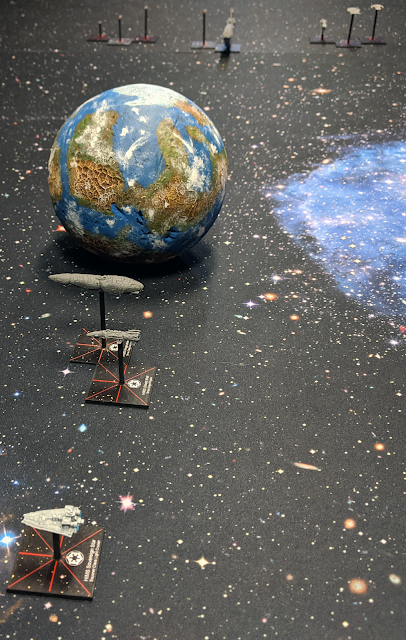 Fortunately for the Imperials, the Rebel fleet exited hyperspace on the opposite side of Omicron-Ceti Prime granting some tactical options. Unfortunately, being in low orbit, the Kingmaker would begin the battle with a speed disadvantage. 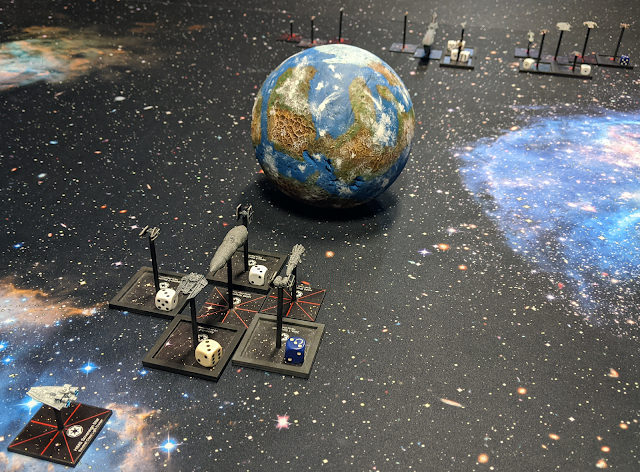 The Kingmaker immediately made a turn to port and accelerated out of orbit in the hope of staying in the shadow of the planet for a while longer. This would give time to get the ship up to speed. Meanwhile, the HIMS General Krill, Bayonet Class Frigate, accelerated to the Kingmaker's starboard in an attempt to cover that flank from the Rebel corvette group. The Rebel fleet accelerated in system.

As the distance closed, the Rebel commander had to choose to round the planet with the Paragon, his most powerful ship, in one direction or the other. Correctly predicting which side the Paragon would go, the Kingmaker turned the other way to face the frigate group. The General Krill continued to accelerate hard to the other side of the battlespace maintaining long range to the corvettes, her heavy turbolasers giving a range advantage. The Kingmaker loosed fire at the Tyrant's Bane, CC-9600 Class Frigate, but only tickled her shields at this range. 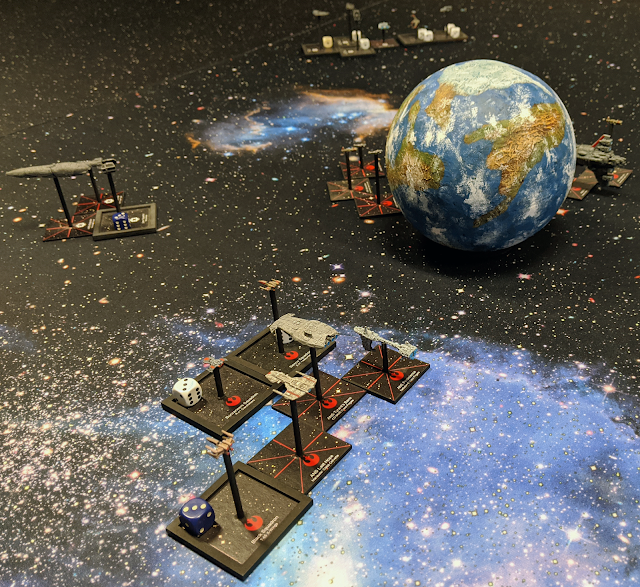 Hoping to keep the range to her advantage, the Kingmaker turned to starboard as the Rebel frigate group's medium turbolaser armament was lacking in comparison to the Strike Cruiser. The Paragon passed by the planet at a very close distance, her shields flaring due to atmospheric friction. 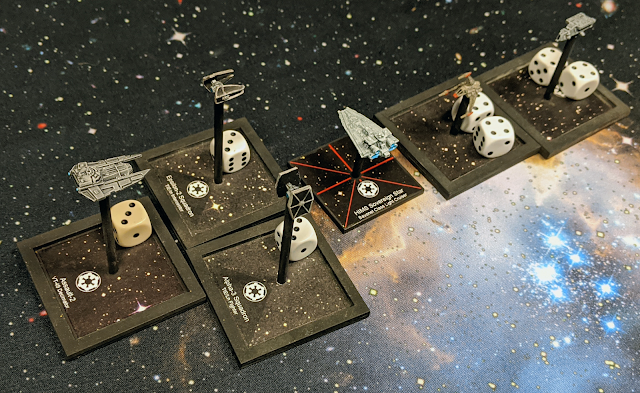 However, things began to turn for the Imperials. All on her own, the General Krill was now the target of a boarding attempt. Two flights of Delta DX-9s carrying Rebel marines, escorted by JV-7 shuttles angled at the Bayonet Frigate. Moving to intercept, a squadron of TIE/In Interceptors and a squadron of TIE/Ln Fighters were joined by a VT-49 Decimator gunboat. They gave a good accounting of themselves but a few shuttles got through and deposited their cargo onto the little frigate. The General Krill was no longer in Imperial hands. 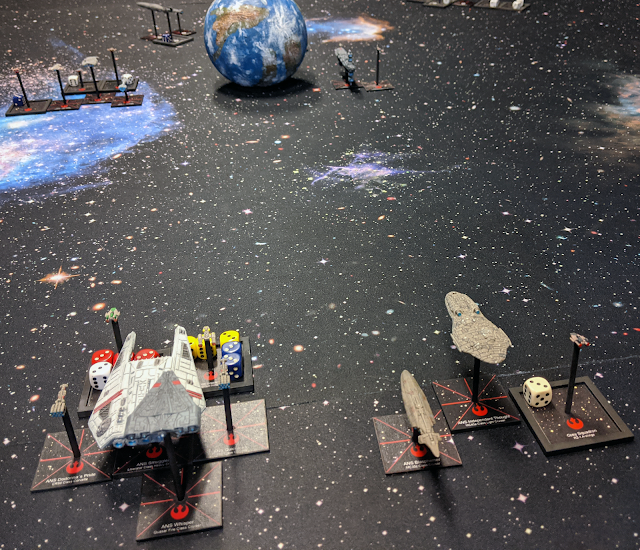 Adding insult to injury, the Rebel reserve force now entered the fray. Waiting for the call, the ANS Smuggler, a Liberator Class Heavy Cruiser, was waiting outside the oort cloud for the right moment to strike. She brought with her a Quasar Fire Cruiser, MC40 Cruiser, MC30 Cruiser, and two CR90 Corvettes. The force disparity just got much worse. 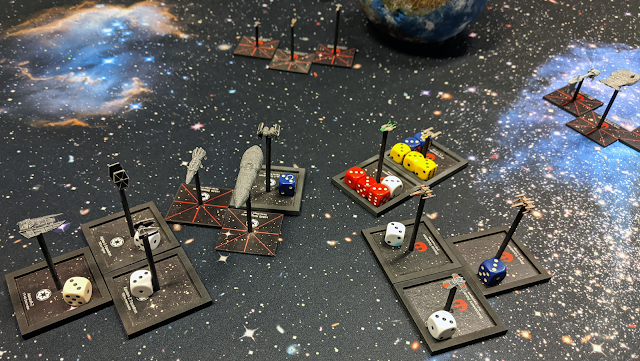 In quick order the starfighter compliment of the reserves streaked to the Kingmaker. A-Wings, Y-Wings, X-Wings, Z-95 Headhunters, and R-41 Starchasers went in for the kill. The TIEs that returned from the General Krill were not enough to stop this onslaught. Proton torpedoes and proton bombs smashed into the Kingmaker until its hull buckled and its atmosphere escaped; the strike cruiser was no more. 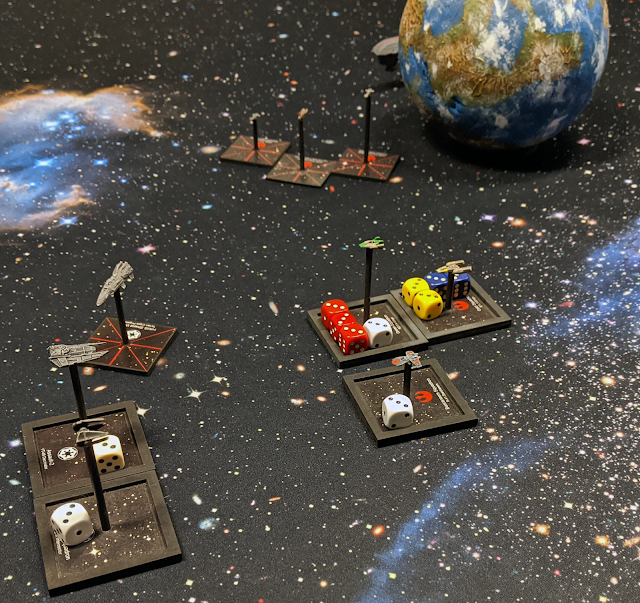 But the Kingmaker did not go down without a fight. As the Rebel starfighters strafed her hull and tore great holes in her structure, her turbolasers and ion cannons ripped into the Tyrant's Bane until her reactor gave out and she disappeared in a flash. The hypermatter explosion from this frigate took out her escorts, a Nebulon-B Frigate and a Marauder Corvette. The Marauder was a veteran of the 1st Battle of Omicron-Ceti; only fitting that she meet her demise in the 2nd. Shortly after the remaining Imperial Tartan Frigate jumped out of the battle leaving the remaining TIEs to be destroyed.

The 2nd Battle of Omicron-Ceti was a Rebel victory though not without its costs. The Ado Sector Campaign continues.